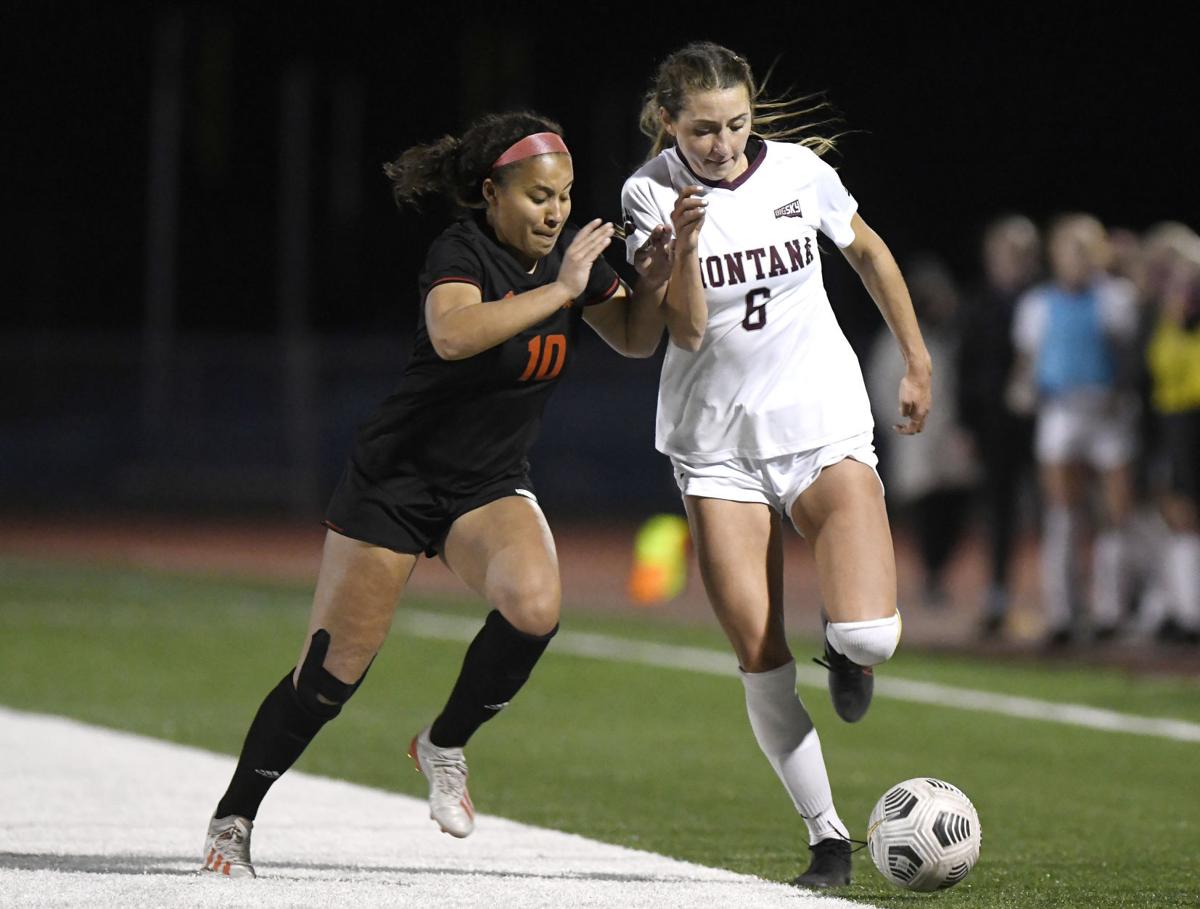 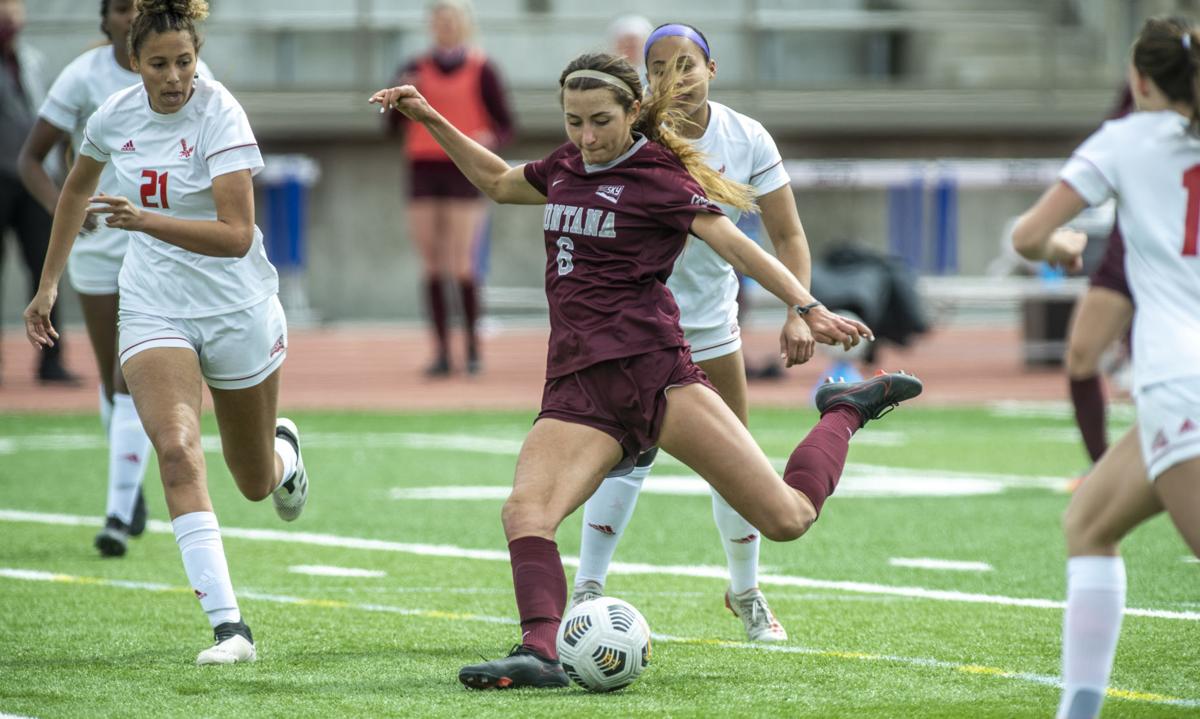 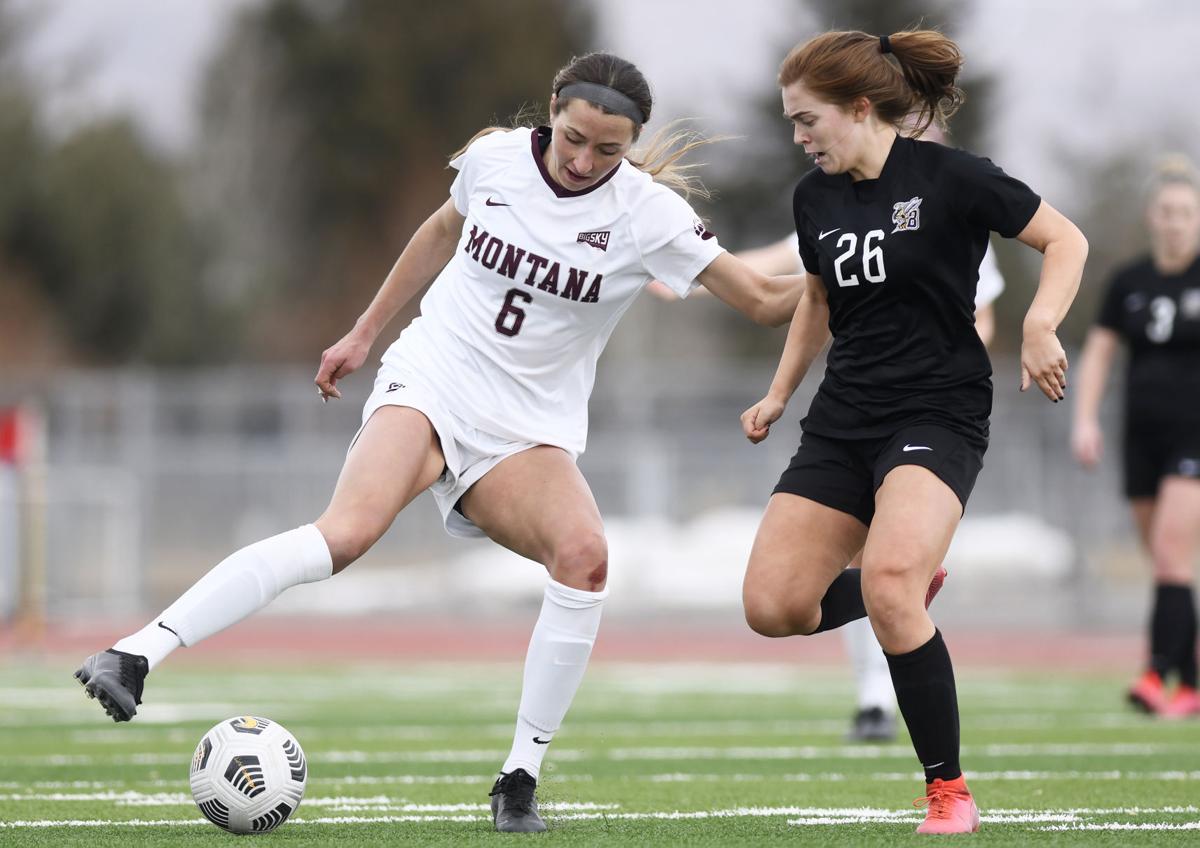 Chris Citowicki arrives at Montana’s field for maintenance, expecting no one to be there. Alexa Coyle, working on her game, is.

Citowicki, the Grizzlies head coach, shows up early to practice, hoping to prepare before his players arrive. He’s too late. Coyle was already there, fine-tuning her skills.

Citowicki asked himself if Coyle ever took a break. He already knew the answer, though. He knew why too.

The agony of inadequacy demands Coyle grows beyond it.

Coyle’s been named all-Big Sky multiple times. She’s been selected as her team’s top offensive player since she was a freshman. She’s scored goals in crucial moments in the postseason, leading to all-tournament team accolades.

This was all despite losing her spot in the lineup as a sophomore. Coyle had never experienced a drawback quite like that.

Coyle grew up in an athletic family that included her brother Brock, a former NFL player. She was a star at Bozeman High. She immediately contributed at Montana.

But then, she was questioning herself. Not necessarily doubting her value to the team, but how she could verify that value.

She called this time in her life purposeful. Without it, she wouldn’t have become the player she is now.

“I think every down leads to an up,” Coyle said. “That moment in 2018 was one of the biggest bits of adversity that I experienced in sports that I truly hadn’t had in recent past. I was in a position where I was taken out of the lineup and that was, ‘OK, how do I come back from that? How do I get that back, and how do I prove myself?’

“I realized the things I needed to improve on and how I need to get there.”

Coyle’s career was boosted because of it. She leads her team in several ways, including in offensive production.

The Big Sky champion Grizzlies (9-1) will lean on Coyle again in their NCAA tournament opening-round match against South Carolina at 4 p.m. Wednesday in Wilson, North Carolina.

“A lot of people just see this finished product of Alexa and think it’s so polished and clean,” Citowicki said. “People don’t understand how much work she does. … It’s been a product of years of hard work and this mindset that separates her from everybody else, because I don’t know many people who work as hard as Alexa.”

In an athletic family, Coyle tried a variety of sports. She relished the camaraderie of soccer.

While winning a state championship with the Bozeman Hawks, Coyle stood out as a senior. She won Gatorade Player of the Year, scoring 29 goals and tallying 15 assists.

She powered Bozeman to an undefeated state championship run that year. She credited Hawks head coach Erika Cannon and other coaches in the area for teaching her.

The team aspect compelled Coyle to pursue the sport further. Though award-laden, she believed her career was highlighted by the relationships she forged through challenges.

“Growing up,” Coyle said, “it all shaped me to be the player I am today.”

She achieved her dream of playing Division I when she arrived at Montana. She impacted the team immediately with one of the program’s best-ever seasons from a freshman.

She started in 20 of the 21 matches she played. She led the team in goals (four), points (10) and shots on goal (17). She displayed composure with a game-winning goal and another in the Big Sky semifinals, leading to her all-tournament team selection.

Citowicki took over as head coach the next season. While an assistant at North Dakota, he realized Coyle was “the complete package.” Her presence, he added, was an immense help during the transition.

“How could you not want somebody like Alexa in the program?” he said. “It’s not often you get to work with a star like Alexa.”

When Citowicki arrived in Missoula, he took immediate note of Coyle’s height at 5-foot-10.

The Grizzlies coach noticed an unlocked potential as well. In fact, he didn’t believe she knew the level she could reach yet.

So Citowicki made a painstaking decision in his mind. He could’ve simply allowed Coyle to continue on the trajectory she was on and stay uninvolved in her progression. Instead, he found another way to propel her.

As a sophomore, Coyle displayed effort but wasn’t scoring often enough. Citowicki thought removing her from the lineup would urge her to perform at a higher level, forcing her to fight back for her role.

Coyle doesn’t remember how she was told about the decision, only her thoughts when she was. Disappointment. Motivation. Another chance.

“This is an opportunity for me to work very hard and learn and improve,” Coyle said. “There was a little bit of that fire under me to where I want to prove myself to get back in that lineup.”

It worked. She not only began scoring again, she did when it mattered most. She tied for the lead in the Big Sky with four game-winning goals, including in the conference tournament semifinals and championship, leading the Grizzlies to their first Big Sky title since 2011.

She led the team with 13 points and six goals for the season. After scoring once in the team’s first 11 matches, she recorded four goals in the final seven contests.

“Through playing sports, there’s so many highs and all of the amazing times with your teammates, but that doesn’t go without very hard days,” Coyle said. “There are days when you push your body beyond limits you never thought. There’s hard days mentally, and I think all those things also make all the amazing moments with your teammates that much better, the success and the experiences that much richer.”

In Coyle’s junior season, Citowicki knew she could keep up with anyone in the conference athletically. But he noted weaknesses in her decision making. That needed to be addressed immediately.

“Alexa, I need you to be smarter than you’ve ever been before,” Citowicki recalled telling her. “Let’s evolve you tactically. … You have to be better.”

As a junior, Coyle was one of five Grizzlies to start every match. She led the team again with nine points and four goals, including back-to-back game-winners and another in the Big Sky semifinals, by season’s end. She led the Big Sky with 58 shots on her way to becoming a member of the all-conference second team.

“Every time she’s grown, it’s been out of frustration and pain,” Citowicki said. “She has the mindset to keep coming back and learning from those moments and keep getting better and better.

“It’s goosebump-worthy for me because you don’t find people who can take that pain and come back from it. Oftentimes, they just give up. She doesn’t give up.”

That was evident when Coyle maintained her training during the coronavirus pandemic. She kept up with whatever equipment she had around. She took to hiking trails for running workouts to stay in shape. Inspired by her team, she found any way she could to remain ready.

The Big Sky moved fall sports to the spring because of COVID-19, meaning the Grizzlies had to wait for their next opportunity to play. But Coyle’s thankful for that time because it ultimately led to the present.

“We wouldn’t be the team that we are and have been this spring without that,” she said. “It’s been such a special spring in so many ways. I’m just so grateful.”

This season, Coyle was named to the all-conference first team. She leads the Grizzlies in shots on goal (16), points (10) and goals (five).

Citowicki wondered how Coyle would respond from his decision to take her out of the lineup as a sophomore. In reflection, she wouldn’t have become the player she is without it.

“She wouldn’t have reached her potential if she wasn’t told she wasn’t good enough,” Citowicki said. “But if she didn’t learn the way she did, she wouldn’t have scored the goals that she did and we wouldn’t have all these trophies right now. She’s had an incredibly successful career because she’s been told, ‘Hey, you need to be better,’ and she’s worked at it.”

Coyle intends to return next fall with another season of eligibility granted by the NCAA. Next, Citowicki said, is preparing Coyle for the NWSL Draft, which former Bozeman teammate Averie Collins was previously selected in, or possible professional opportunities overseas. Citowicki will spend next fall finding ways to develop Coyle’s game even further.

“I’ve also got to keep my mindset in the present and keep focus on my goals here and now at Montana,” Coyle said. “I feel like staying focused on the now, that’ll take care of the future.”

Coyle, who’s been academic all-conference multiple times, intends to pursue a career in sports, even if a professional soccer path refuses to materialize. She attained a degree in management information systems last spring and plans to wrap up her master’s classes in the fall.

She’s not precisely sure what type of job she’ll want. Even if she fails, as everyone does, she knows how to handle the pain of defeat.

Inadequacy will continue to be her motivation.