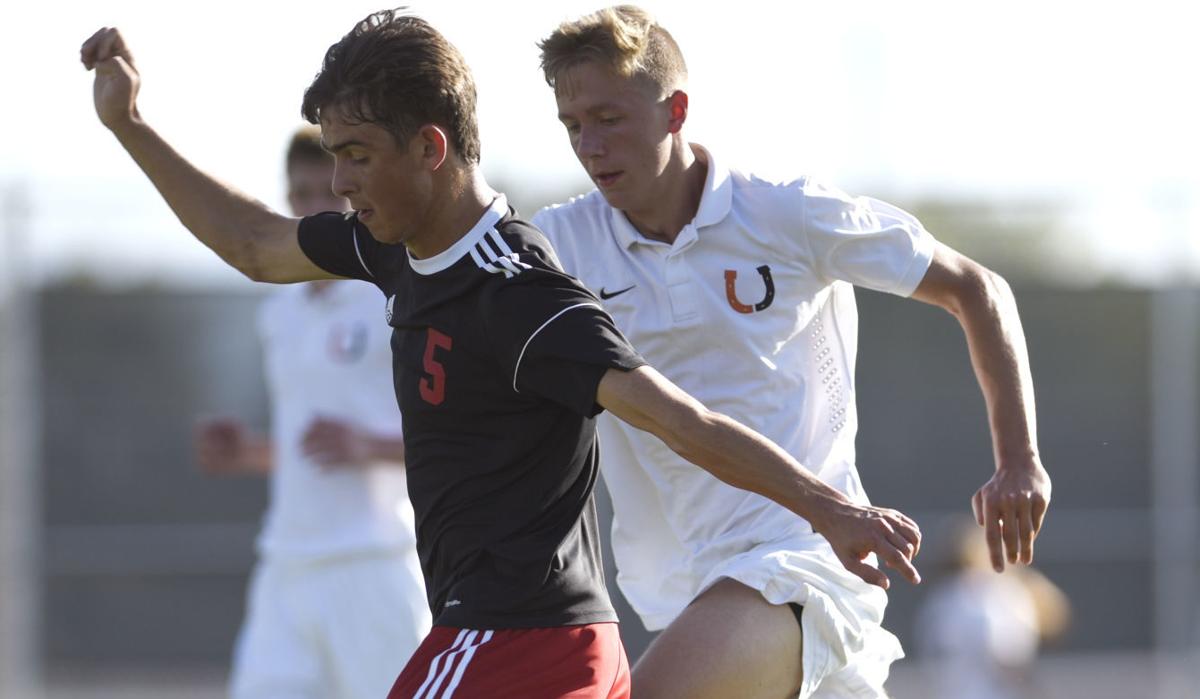 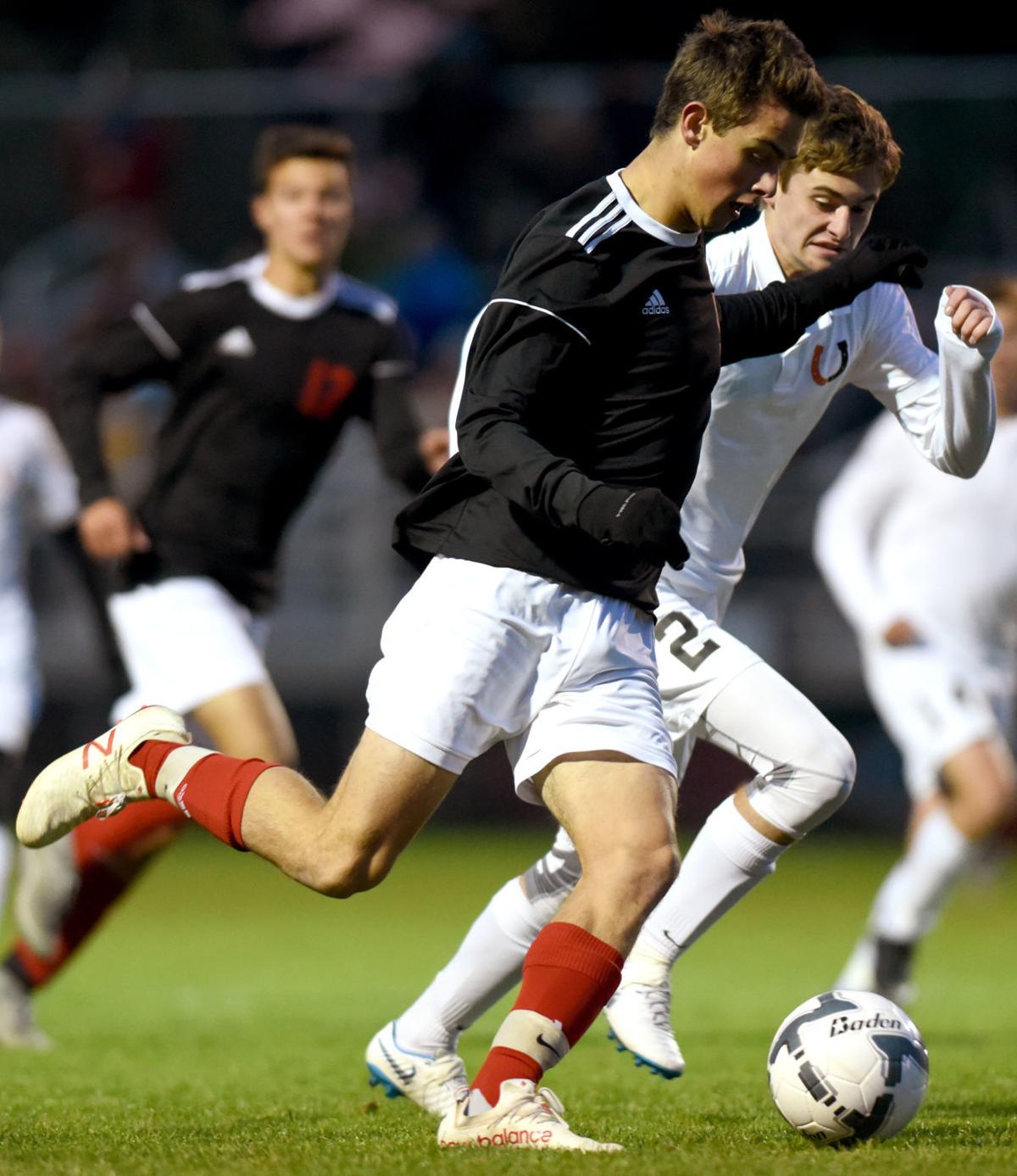 Bozeman’s Zach Springer battles Billings Senior for control of the ball on Sept. 27, 2018, at Bozeman High. 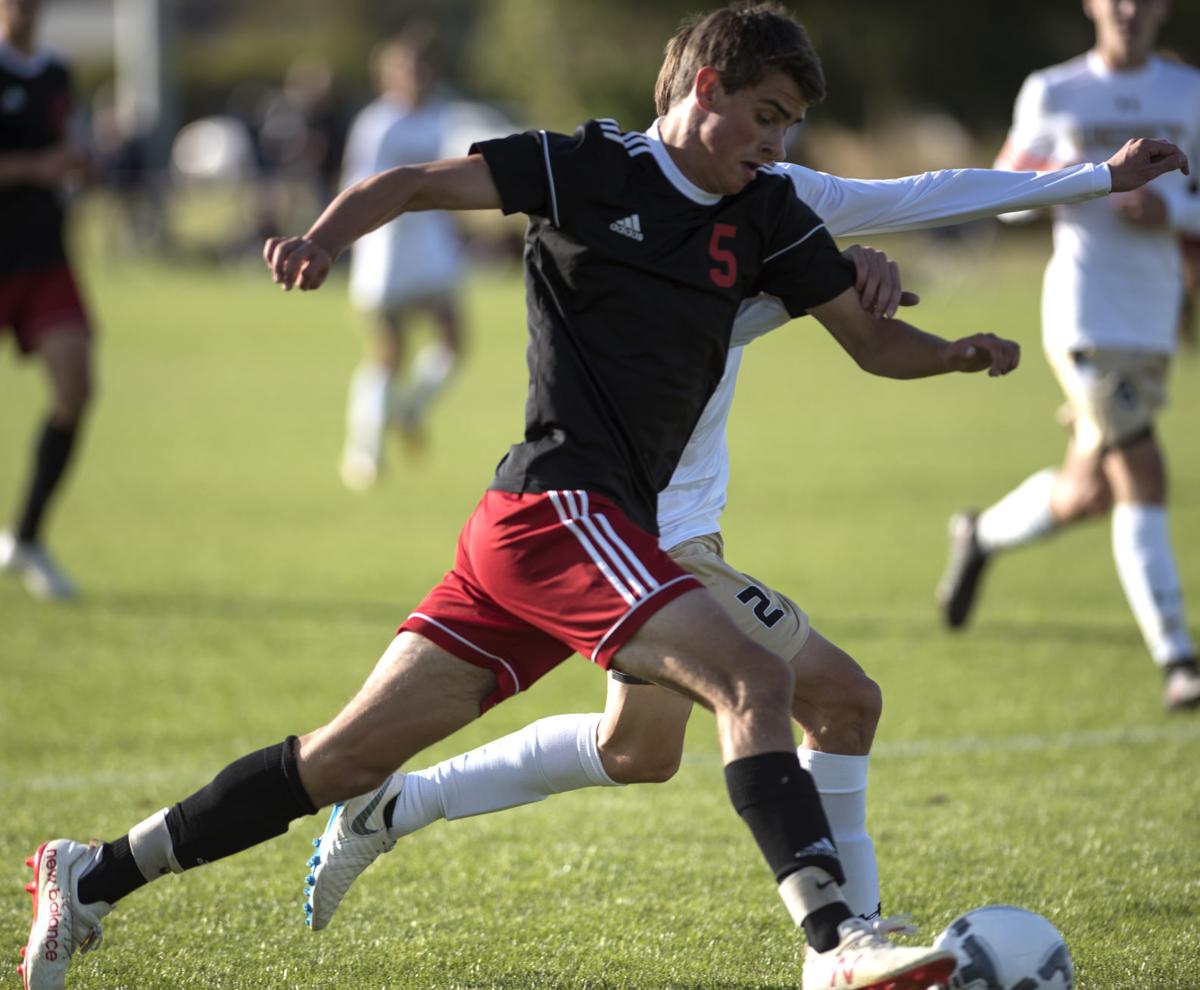 Bozeman’s Zach Springer battles Billings Senior for control of the ball on Sept. 27, 2018, at Bozeman High.

Zach Springer and Jackson Coles were both within reach of the ball. Coles looked up and asked if Springer wanted it.

Very few people understood why this goal was significant. Hawks head coach Hunter Terry knew. He marched directly onto the field and hugged Springer, not caring if he was carded. The moment was too special.

With that goal, Springer broke the Class AA career goals record with 53, according to wallsoccer.net. But more importantly to him, the goal tied the match that ended up being a 2-1 Hawks win over Great Fall CMR on Friday at Bozeman Sports Park.

Springer said he “totally forgot” he was within a goal of breaking the record until he saw Terry on the field in the 38th minute of the contest.

“I was really rooting for him to score a goal,” Terry said. “And here’s the thing, it was always nonchalant. … When he scored, I was so excited. It was great. And the thing that I love most about Zach it was never about Zach. He didn’t want anyone to know.”

Springer was set on keeping his accomplishment a secret.

His former teammate, Ted Scott, told Springer last year he might be close to the record. He was only a few away from Missoula Sentinel’s Kyle Sillars (1997-2000) and Billings West’s Alex Gallagher (2007-2010) who were both at 52.

Terry joked the record had stood so long that he played against Sillars. But Springer forgot about it for a while, too focused on the team.

“And I made sure I didn’t tell anybody,” Springer said. “My family was the only ones who knew.”

Terry didn’t know until he looked back in his own records and added the goals up.

He convinced Springer on Friday it was alright to let the public, including his teammates, know.

“I’m really proud he has accomplished this,” Terry said. “But I’m more proud that he doesn’t want this to be about him. He wants it to be about his team.”

Springer played soccer as a youth mostly because all the other kids his age were. But as he grew up, the sport grew on him.

He began playing constantly. Before practice. After practice. He took breaks from his homework so he could play.

“It’s just always been a big part of my life,” Springer said.

Terry realized Springer’s potential early. The coach estimated he scored 23 goals as a sophomore and then 17 last season.

When asked what led to him breaking the record, Springer didn’t take credit.

“I’ve had some insane teammates from the last couple years, some kids who have gone on to play college soccer,” he said. “They’ve just been setting me up, and I’ve been putting stuff away when they needed me to.”

Springer’s role changed depending on who he played with. This season, for example, he’s in a hybrid position where he’s scoring and facilitating, as evidenced by his 11 goals and 10 assists thus far.

Terry believes three types of forwards exist: ones who work hard for everything, sneaky opportunists and crafty “slimeball” goal scorers. He called Springer all three.

“He can be a little slimeball. He can be that opportunist, just be in the right place at the right time. And then he can outwork people,” Terry said. “So just catching that early on and seeing that early in his career, I’ve always known Zach’s a special player. And more importantly, he’s a special guy.”

Springer and the rest of the Hawks (11-0, 10-0 Eastern AA) had to adjust to unique conditions Friday. First, they were playing on a turf field as Bozeman High’s was being preserved for the postseason. Springer felt the turf played much faster than normal.

Also, CMR made sure to limit scoring by packing the box. Terry joked at one point he noticed all of CMR’s players in front of the net.

And CMR scored in the eighth minute for a 1-0 lead. The undefeated Hawks normally haven’t had to come back at all this season.

And that’s why Springer’s goal on a set piece, which tied the game up before Coles gave the Hawks the lead in the 48th minute, was vital.

“Zach Springer just tucked it away,” Terry said. “It was a beautiful goal.”

After the win, Springer mostly talked about how proud he was of his team. He was happy the Hawks had a chance to face a deficit and that they came back.

Before his record-setting score, he was more concerned about Bozeman’s success. That hasn’t changed now.

“It definitely is a cool feeling,” Springer said. “But right now, I’m kind of focused on what’s next. We have two more regular season games and then state coming up. So I think there’s bigger fish to fry right now.”