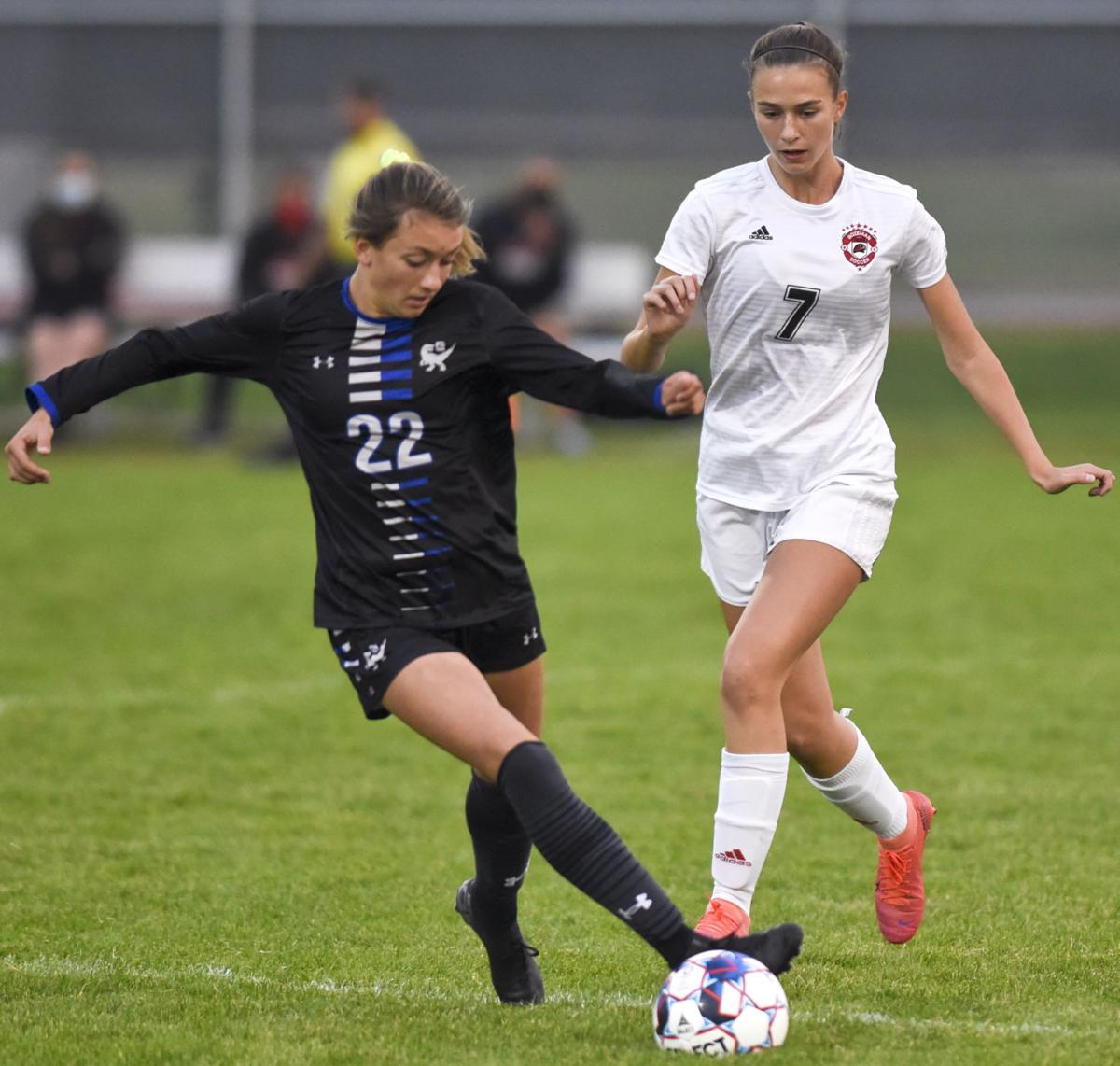 Hawks goalie A.J. Battle makes a save in the first-ever crosstown game between the two teams on Tuesday at Bozeman High.

The Hawks celebrate a goal Tuesday evening at Bozeman High.

Hawks goalie A.J. Battle makes a save in the first-ever crosstown game between the two teams on Tuesday at Bozeman High.

The Hawks celebrate a goal Tuesday evening at Bozeman High.

Miles Al-Chokhachy hit a precise shot, right over the outstretched hands of Gallatin’s goalie. Her Bozeman teammates surrounded her to celebrate as a team.

And, as a team, the Hawks found their rhythm and defeated their crosstown rival for the first time. Four different Hawks scored as they topped the Raptors 4-1 in an Eastern AA duel on Tuesday at Bozeman High.

“I think it was super cool that the Hawks are still standing,” Bozeman’s Payton Putnam said. “I just feel ecstatic about it.”

Hawks junior Sami Murphy said Bozeman (5-1) stressed pressing Gallatin’s back line. By working together, she said, the Hawks built up an attack. And now they’re on a five-game winning streak.

“Obviously it feels good to pull out a win,” Murphy said. “It definitely is weird playing against our friends, but at the end of the day, we’re all still friends. I thought we played well tonight. We were focused on pressing together and working really well as a team. And I think throughout the season we progressed in bonding, and I think that definitely showed in this game.”

Putnam, Al-Chokhachy, Murphy and Ella Neubauer as well as Gallatin’s Olivia Collins all scored on Tuesday.

Multiple players noted how well they had known each other. Putnam was impressed by Collins last season when she climbed all the way to the varsity team as a freshman. She added Collins is now “really difficult to play against.”

Collins said she respects the Hawks as players and people.

“It’s really interesting,” she said. “The environment and energy is super competitive but super respectful on both sides.”

Murphy noted how she had played with and trained with many of the Raptors. So this allowed the Hawks to pick up on some tendencies. For example, the Hawks game planned against Collins, especially after she scored four goals against Belgrade last weekend.

Still, Putnam was sad she wasn’t playing with some of the Raptors anymore.

“It’s so weird to think about that we were all one team and then we were split up,” she said. “It’s like we’re playing our teammates. It’s almost like a scrimmage, but a little more fired up. We wanted to get out there and get a win.”

Ganey pointed out the Raptors (3-3) still have positives to take away from the game. He feels if just a few things had gone differently, the game would’ve had a different outcome.

That said, Ganey noted how nervous his players felt, as much as they tried to enjoy the atmosphere of the rivalry.

“Going into this game, I don’t think anyone expected us to compete, all season long, but especially against the Hawks,” Ganey said. “We’re super young and building for the future.”

The Hawks know the Raptors will be a team to be taken seriously when they face off again later this season. But considering the game was mostly amongst friends, Putnam admitted she may take advantage of the bragging rights for a short while.

“I think a little bit,” she said with a smile. “But we’ve still got to play them at the end of the season. So we’re not getting too cocky yet.”