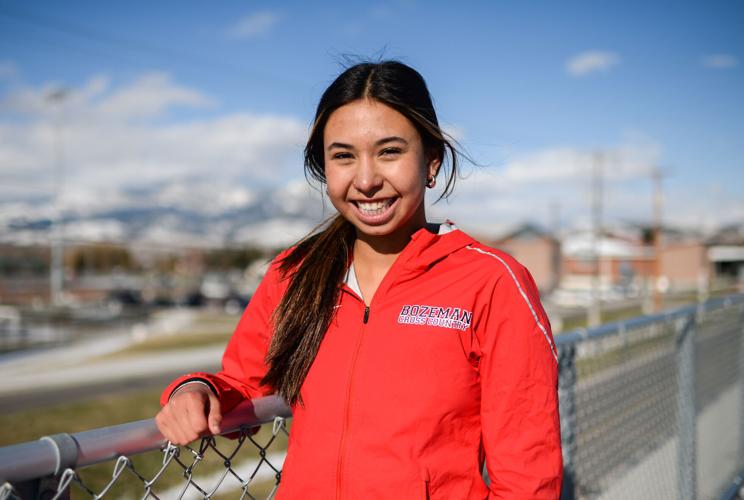 Bozeman distance runner Hayley Burns poses for a photo, above, and warms up for practice Wednesday at Bozeman High. 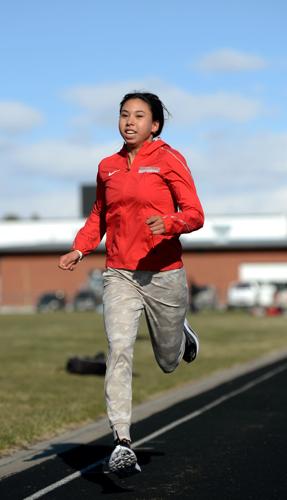 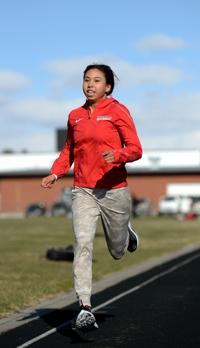 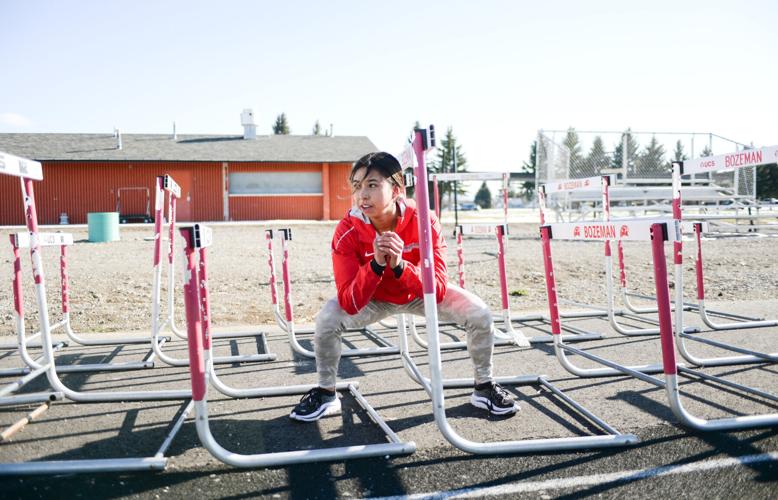 Bozeman distance runner Hayley Burns poses for a photo, above, and warms up for practice Wednesday at Bozeman High.

Things could have easily gone the opposite direction when Bozeman senior Hayley Burns stepped to the line at the Arcadia Invitational last Saturday.

For one, it was about 100 degrees on the track when Burns and Bozeman distance coach Casey Jermyn picked up her race packet. There were also over 30 runners in her heat of the rated section of the girls 3,200 meters.

“And we were like, ‘Oh God. It’s snow when we’re running (in Bozeman),’” Burns said. “But we ended up getting a huge delay, so it was running at dark, it was cooler and nice.”

Once the race was moved to the evening, Burns had to adjust to a race that was “super different” than what she was used to on the track.

“I didn’t want to be running the whole race in lane five, but I also didn’t want to get boxed in,” Burns said. “It spread out decently throughout the race and that helped a lot. And when (you see other runners) slow down, you can cover those gaps.”

Burns used that mindset to navigate through a challenging field. She stayed with the lead pack through the first mile before cutting across into lane two to avoid being boxed in. As the race started to stretch out with Ellie Black from Piedmont (California) and Emily Van Valkenberg from Eastlake (Washington) jostling for the lead, Burns went with them.

Once the trio reached the bell lap, Burns made another move. She passed Van Valkenberg before staying on Black’s hip for another 300 meters. As Black and Burns made the final turn, that’s when the waiting game paid off — Burns kicked, winning both her heat and the overall rated section in a personal best time of 10 minutes, 43.38 seconds.

Jermyn said it was “really awesome” to see Burns keep her composure in a race like that. He added that it’s the work put in over the last two cross country and track seasons that allowed her to perform so well in a larger meet like Arcadia.

“For her to step on that scene in her first time really being on that stage on the track, I think some experience in the fall kind of carried through,” Jermyn said. “Her experience going to regionals, going to nationals, really helped her being on that big of a stage.”

Before she got to compete on such a big stage, Burns’ journey started back in Colstrip where she first picked up running in middle school.

“I wasn’t that good at first,” Burns said. “But I feel like I slowly got better.”

So the success was there early on. Then came the turning point for Burns — moving midway through her sophomore year to Bozeman, where “running was everything.”

Junior Luci McCormick — who was a freshman when Burns moved to Bozeman — said Burns was trying to feel out where she fit on the team at first.

“I feel like we became pretty good friends first because I was just a freshman, so I didn’t know the group super well either, besides my sister (Natalie who) was in it,” McCormick said. “Then we all just sort of became one.”

Adding Burns to the mix helped Bozeman girls cross country continue its winning ways. After a team state title in 2019, the Hawks repeated in 2020. Burns finished sixth overall with a time of 19:55.37 and was the No. 2 runner for Bozeman.

That was even with adverse course conditions; the 2020 Class AA meet was moved to a two-day event as a COVID-19 precaution and it also snowed that weekend.

“There was tons of snow on the ground when we ran the second day because it had just snowed and there was no one to smush it down before us. So we were running in (what felt like) quicksand.”

Regardless, this Bozeman distance group was looking to build off the momentum from the fall heading into the 2021 track and field season. It helped having a runner like Burns that is extremely versatile, running everything from the 4x400 meter relay to the 3,200 meters.

“Those athletes don’t come around a whole lot,” Bozeman head coach Blaine Pederson said. “You think of (Christina) Aragons over in Billings Senior, and then Odessa Zentz in Helena this year kind of has that range too. So it’s fun to see when you can have an athlete that can compete across many distances.”

Those plans altered, though, when Burns suffered a stress fracture midway through the season.

“It kind of surprised me, as it did her,” Jermyn said. “I think as a coach the thing that I really harped on was just rest and recovery.”

Added Burns: “It definitely sucked. I think over-running sucks because you want to keep going but you get a fracture and it hurts. I really wish that didn’t happen.”

While it was a disappointing end to her junior year, it also added motivation. Jermyn said it caused Burns to “fly under the radar,” and she took advantage.

First, she made a jump at the 2021 Class AA state cross country meet, finishing third overall in 18:30.59. She was the No. 1 runner for Bozeman, too, which once again won the team state title.

Burns followed that up with a 16th place finish (19:02.9) at Nike Cross Northwest Regionals on Nov. 14 in Boise, Idaho, and a new personal best at the Garmin RunningLane Cross Country Championships (17:59.7) on Dec. 4 in Huntsville, Alabama.

“It was amazing,” Burns said. “I love traveling on planes for races. It’s the best thing ever.”

It didn’t stop there, as she also made changes to her winter training routine. Burns ran higher mileage than in previous years. She focused on her sleep, too, something she hadn’t paid as much attention to before.

“I think it was a lot of hard work last year, but it was less (of a focus on) recovery,” Burns said. “And that kind of opened my eyes up after that.”

And just two meets into her senior track season, the difference is clear. Not only was she voted a team captain, but Burns has already set personal records in the 800 meters (2:19.83) at the Gallatin Valley Triangular on April 2, and in the 3,200 meters at Arcadia.

“It’s pretty awesome because, for me, it’s me seeing all that hard work pay off,” Jermyn said. “A lot of kids put in a lot of hard work and sometimes it’s harder to transition that to the track or to performance. And she’s definitely doing that. It’s just really fun and enjoyable for me to kind of sit back and watch it progress.”

McCormick added that Burns’ recent run of performances — along with her attitude during practice — is “super motivating.”

“When you’re having trouble with a workout, you see her and she just gets through it and gets it done,” McCormick said. “And you’re like, ’I can too, then.’”

Burns said her teammates, including McCormick, have been a “huge support group” to help her reach this point. She added that Jermyn — who first told her about Arcadia and pushed to get her into a better heat — has been crucial as well.

With about six weeks left until the Class AA state track and field meet, Jermyn said the plan is to keep being consistent in training and “enjoy it while we can.” In the meantime, Burns said a race like the one at Arcadia is a “huge confidence boost” to finish out her time at Bozeman.

“I think the biggest confidence boost is the time, too, where I was like, ‘OK, you’re past that 11 (minute) barrier,’” Burns said. “It definitely is super nice that you can see after the stress fracture (me) moving up, and that’s nice.”