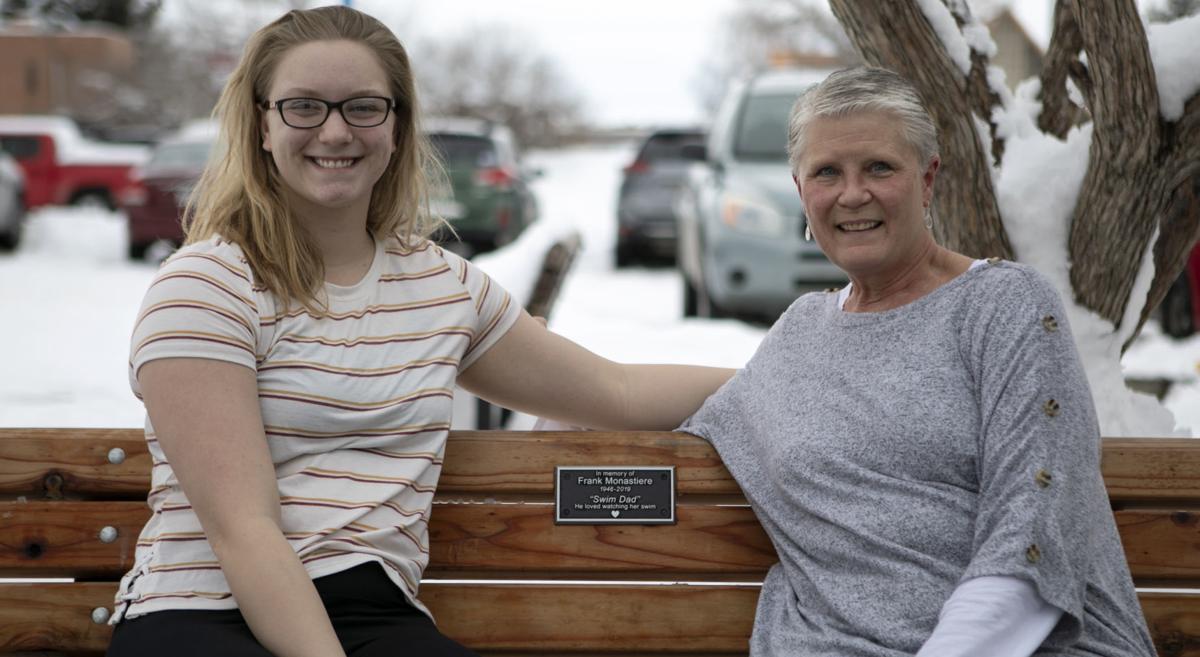 TOP: Sierra, left, and Joanne Monastiere sit on a bench dedicated to father and husband Frank Monastiere on Feb. 6 at the Bozeman Swim Center. MIDDLE: Sierra Monastiere competes in the 200-yard individual medley during the Class AA meet on Feb. 8, 2019. ABOVE: A close-up look at the plaque that adorns the bench. 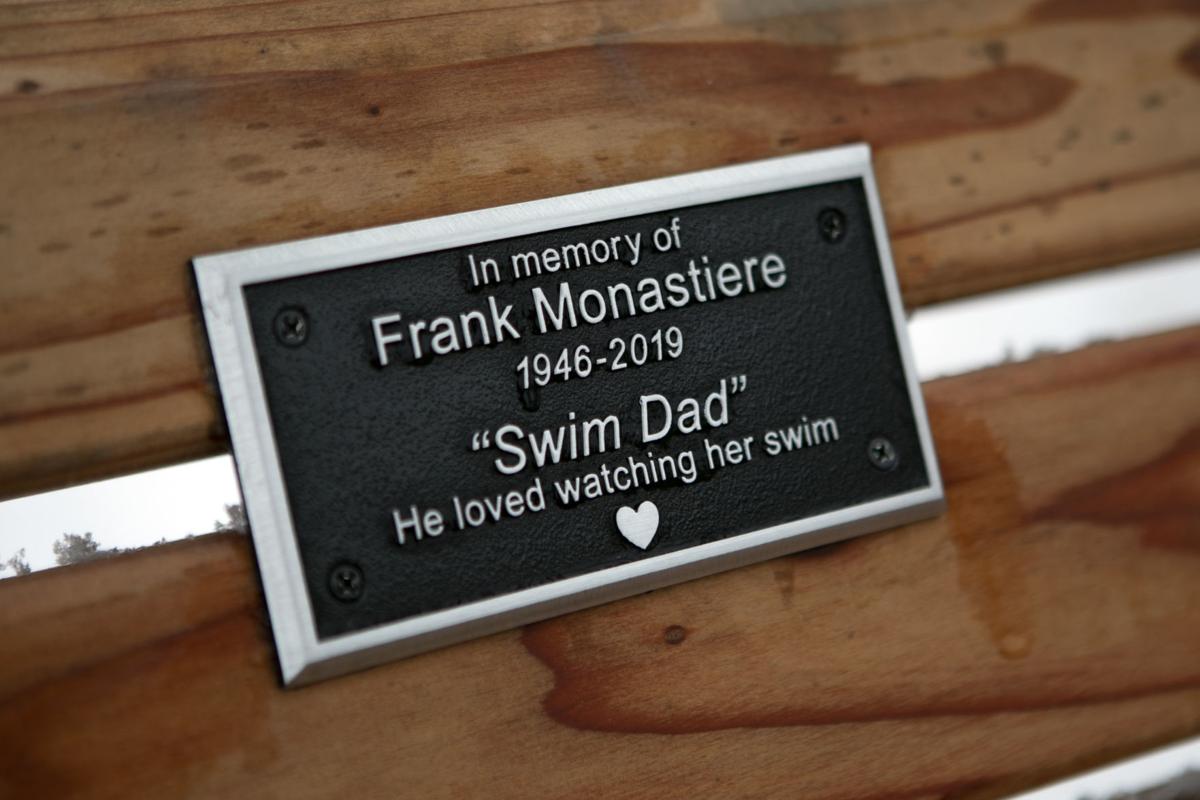 A plaque dedicates a bench to Frank Monastiere at the Bozeman Swim Center. 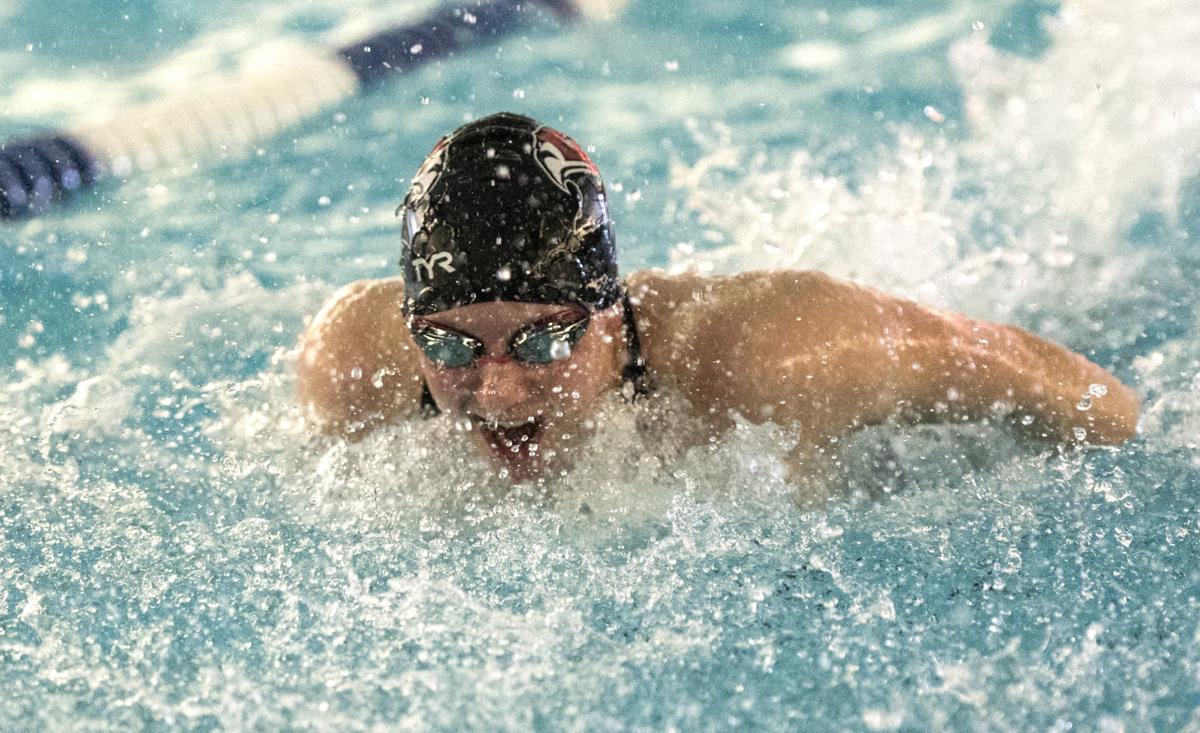 Bozeman's Sierra Monastiere competes in the 200-yard individual medley during the Class AA meet on Feb. 8, 2019, at Bozeman High. 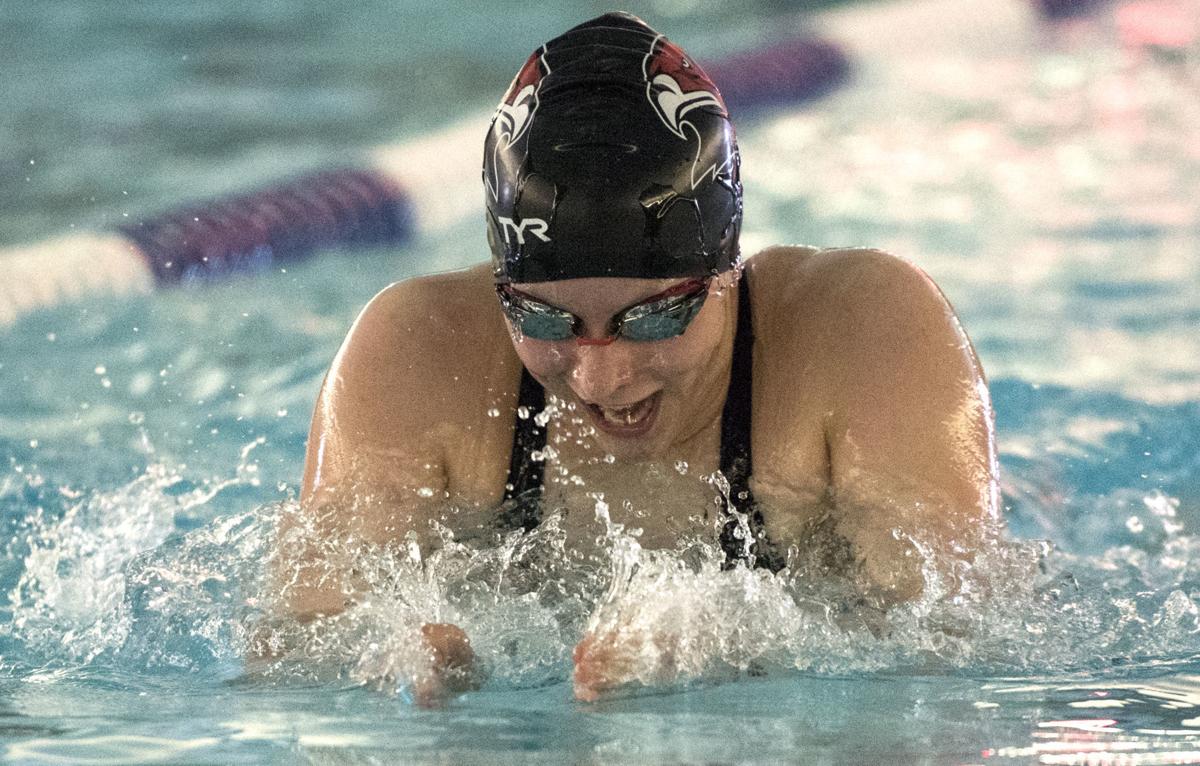 Bozeman's Sierra Monastiere competes in the 200-yard individual medley during the Class AA meet on Feb. 8, 2019, at Bozeman High.

Sierra Monastiere gazes at a photo from years ago, still one of her favorite memories. She’s finishing warmups during a swim meet in Oregon. Wearing a colorful suit and hanging off the edge of the pool, she’s turned to the side and smiling. Her dad, Frank Monastiere, is standing over her, talking.

Sierra can’t recall what exactly he was saying, only that it was supportive. He constantly reminded her he had seen how hard she worked in practice. He called her Rocket during meets, a result of his belief of how fast she could go. He said she need not worry about the others in neighboring lanes, that she was only racing against herself.

But what did he say in this particular moment? Was he asking how she was feeling? Maybe asking her if she was ready?

“That one picture pretty much sums up his life as a swim dad. He was always there. I remember he would always belt out my name, and by the end of the meet his voice would be gone,” Sierra said with a laugh.

Bozeman swim meets are a little quieter now. Frank, 73, died in July from cancer that began in his kidney. Hawks head coach Siobhan Gilmartin recalled how he generously assisted the swim community. If a competitor knew Sierra, Frank was a fan. When Gilmartin was hired, Frank encouraged her. When Sierra swam, he cheered, at least until his voice gave out.

Though without his support in person, the Hawks are hopeful of winning at the Class AA meet in Great Falls beginning Friday.

Joanne and Frank met in southern California. Laughing, she said she didn’t plan on falling in love with him. Though occasionally reserved, he was jolly.

They traveled for three months around the country in 1983 trying to find a place they wanted to settle. A third of that time was spent in Bozeman. The mountains and community were captivating. They wondered why they should go anywhere else.

They moved here together a year later and married in 1991. Joanne had a feeling Frank would cherish fatherhood, so in 2003 they adopted Sierra, nearly 2 at the time. Frank often told the story of when his new daughter first came to the house. He reached his arms out, and she ran straight to him.

Frank grew up a motown fan. “My Girl” by The Temptations was among his favorites to sing to Sierra and Joanne. They were his girls.

That’s why he viewed his responsibility as supporting them. Frank was retired for more than 10 years before he died, so he involved himself heavily with his daughter’s life. He helped as an aid and crossing guard at her elementary school. As others wanted to talk to him, she was embarrassed and avoided him in public if she could.

Sierra also remembers the fights with her dad. She would relive all of that if she could. That way, at least, he was still around.

Sierra’s parents encouraged her at a young age to join a sport so she could learn the importance of team. Mainstream sports like basketball and volleyball didn’t appeal to her, but swimming did.

“Since then, it’s just been a passion of mine. Just a way to get out stress or anything that was going on in the school day or family life in general,” Sierra said. “The team is just one way you can forget all that. Keep your head down and just swim.”

So Frank also helped out with the swim programs. He volunteered. He traveled to meets. He pulled up a chair and was around during practices. He asked how others were doing and helped families of new swimmers. He even cheered for other teams.

His reserved nature vanished if family was involved. Joanne took a deep breath, pausing a few moments as she told stories about him.

“Very proud swim dad,” she said. A bench outside of the Bozeman Swim Center says “Swim Dad” followed by “He loved watching her swim.”

“He was a very big support for others,” Sierra added, “and they reciprocated when he was sick.”

Frank missed Sierra’s state meet her freshman season. He had dealt with cold symptoms for a while that didn’t go away, so he stayed home this time. Joanne talked to her husband on the phone and picked up that something was wrong, but he wouldn’t say.

He wanted them to enjoy themselves before they came home. In February 2017, he had been diagnosed with kidney cancer.

Joanne had battled breast cancer and has been free of it for more than 10 years. Her experience didn’t take away the fear.

“I was definitely scared, terrified,” Joanne said. “Didn’t want to be a single parent. But in the end, there’s not much you can do about it.”

Frank’s fight was drawn out. His kidney was removed, but tumors spread to his other. The medicine and procedures waging war on the cancer took its toll. When the cancer reached his lungs, he required radiation. He felt tired. The cancer kept spreading to his brain last March.

A couple months prior, Joanne said Frank was standing in the kitchen. He suddenly lost consciousness, fell forward onto the cupboard but then snapped right out of it. Frank spent his life supporting others, and he didn’t want anyone knowing how badly he was feeling. Frank often told Sierra he felt fine, and she knew that wasn’t true.

“I know he really hated us seeing him like that,” she said.

“He hated it, especially you,” Joanne replied to her daughter. “But you were so great with it. You were always consoling him. You were so strong that it gave him comfort I think.”

That’s just how Sierra’s always been. She stepped away from swimming for six months to take care of her dad, not knowing how much time she had left with him.

When Frank grew weaker, Sierra pestered him with questions to help. Did he need anything? Could she get him any tea? How about crackers?

He eventually caved, Sierra recalled, and asked for the crackers.

Sierra remembered taking a day away from school to simply watch movies with her parents. Frank wasn’t one to be content with sitting in a chair. But they spent hours together watching the “Harry Potter” and “Star Wars” series. When they did, he sat in his fading dark brown, leathery recliner.

Gilmartin gravitated to the family. Sierra consistently talked to Gilmartin, who she called another mom, as her dad’s condition worsened.

Gilmartin felt compelled to provide support. She emailed families of swimmers and asked for them to send meals to the family, just hoping for someone to respond. Within a half hour, a week of meals were planned.

But even on her worst day, Gilmartin said, Sierra told others she was fine. As a team captain, Sierra noticed when others were suffering for any reason and tried to help them.

Gilmartin can’t imagine the team without her.

“She’s just a natural caretaker,” Gilmartin said. “She seeks people out, and I think that’s part of her coping is that she’s really in tuned to other people’s pain and steps in to support them.”

The coach often reminded her athlete and student that she was just a kid and that Gilmartin was the grownup. Sierra shouldn’t have to justify skipping a day of practice or fixing her teammates’ problems. That was Gilmartin’s job.

Last winter, Gilmartin traveled to Missoula when her father became sick. She missed more than a week of practice but met her team for a meet in Butte. She fought back tears thinking about what Sierra told her.

“Sierra came up to me — I’m going to cry — and she was like, ‘What do you always tell me? I’ll be the grownup for you.’ I just feel like that’s Sierra. My dad ended up fine thankfully, but she still has that way that she would seek me out. I’m twice her age,” Gilmartin said with a laugh.

Everything steadily became worse. Sierra recalled a time her dad fell. She helped him back up. He wished she didn’t have to support him like that. That was one of the only times Frank’s girl saw him cry.

Sierra remained encouraged and wanted her dad to feel the same. She wrote on a sticky note and placed it on his bathroom mirror.

“I’m so proud of you,” Sierra remembered it saying. ”You’re so strong for everything you’ve been through.”

Joanne tried to take care of her husband by herself, but Frank needed one thing after another. She asked family members to visit and help. Eventually, Frank decided he was done fighting and stayed home on hospice support.

Frank’s wife and daughter made him comfortable. They ran fans and placed cold wash cloths on his head to make him feel cool in the summer heat. They played motown music, his favorite.

His girls watched him slip in and out of consciousness in his final week. They tried to communicate with him. In fleeting moments, he showed joy as other family surrounded him.

“That was, I wouldn’t say the happiest he’s been, but during that time, it was probably his best moment, just to be in front of all of his family,” Sierra said. “He was ready. He knew my mom and I were strong enough to be on our own and he would still watch over us.”

The night Frank died, Sierra asked Gilmartin over to the house. The family exchanged stories. Sierra shared cards she had saved that Frank wrote when she was starting school or going to an overnight swim meet. Gilmartin recalled them saying things like, “You’re my guiding light” and “You’re my everything.”

That struck Gilmartin. Anytime Sierra needs extra reassurance in her life, she will always have those words of support to look back on.

“She’ll never have to doubt that he was proud of her,” Gilmartin said, “that he loved her.”

Frank won’t see Sierra graduate or compete at her final state meet. Joanne is reminded of him by everyday places or beautiful things like sunsets. Neither have gone a day without thinking of him.

In Sierra’s room, she has a board filled with things she’s pinned. Pictures of him. A sticky note once placed on her dad’s bathroom mirror containing a message that may as well be meant for her now.

Sierra needs time to work out her next step in life. Because of the still recent turmoil, she plans on taking a year off of school before she goes to college. She’s still considering her major and future line of work.

She’s sure her dad would’ve supported whatever she decides.