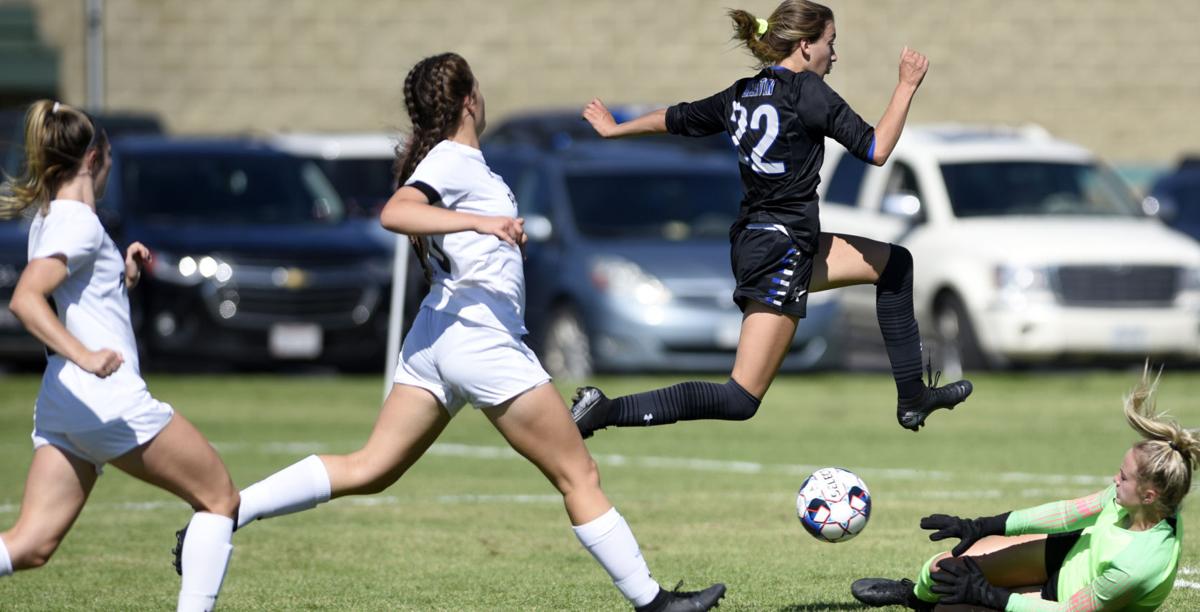 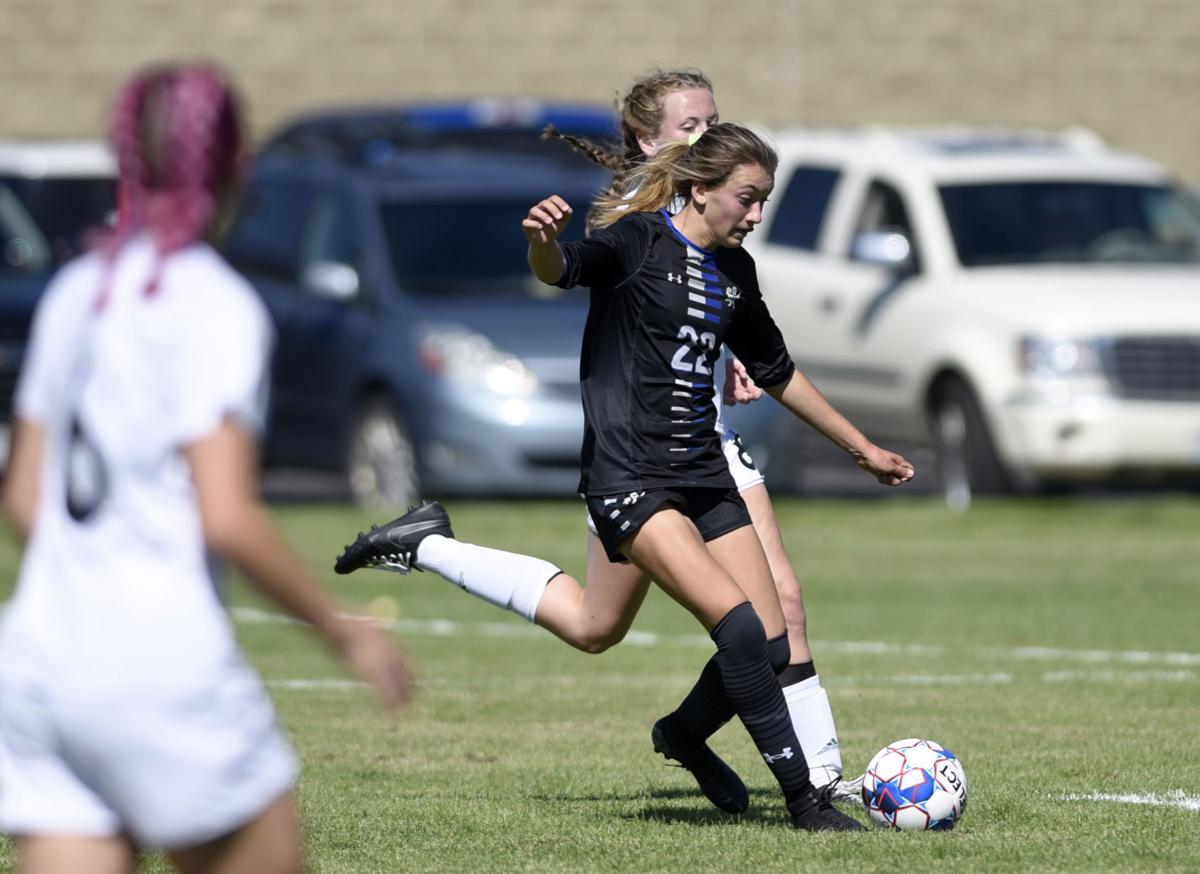 Gallatin's Olivia Collins heads to the net before scoring the game’s opening goal against Belgrade on Saturday at Bozeman High. 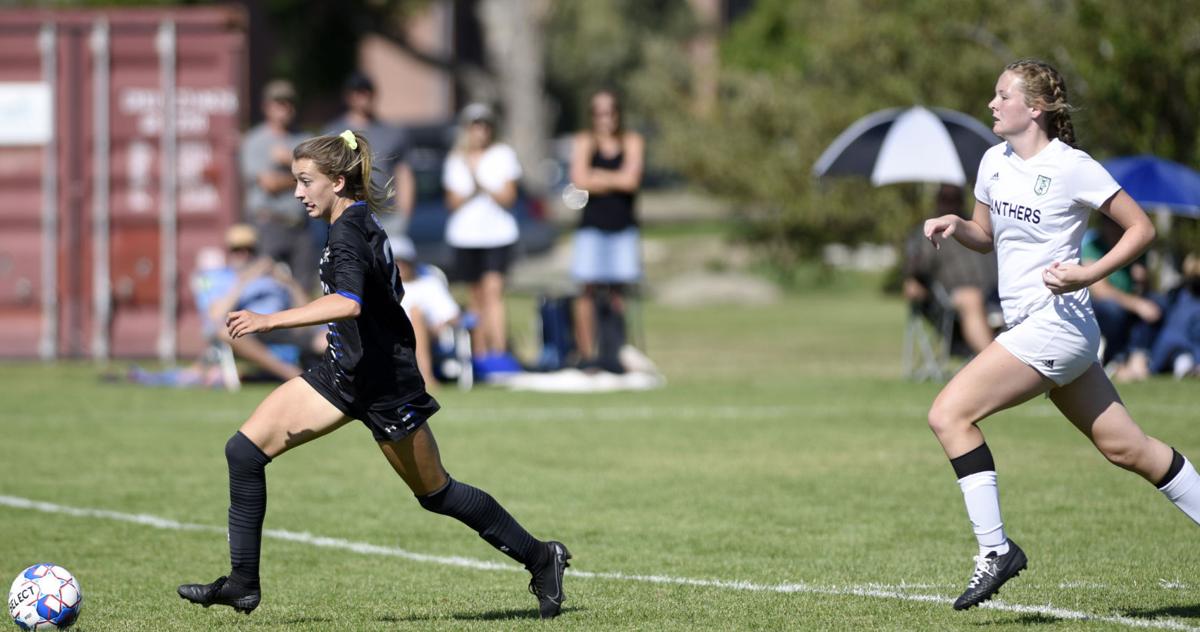 Gallatin's Olivia Collins heads toward the net before scoring her third goal of the day against Belgrade on Saturday at Bozeman High. 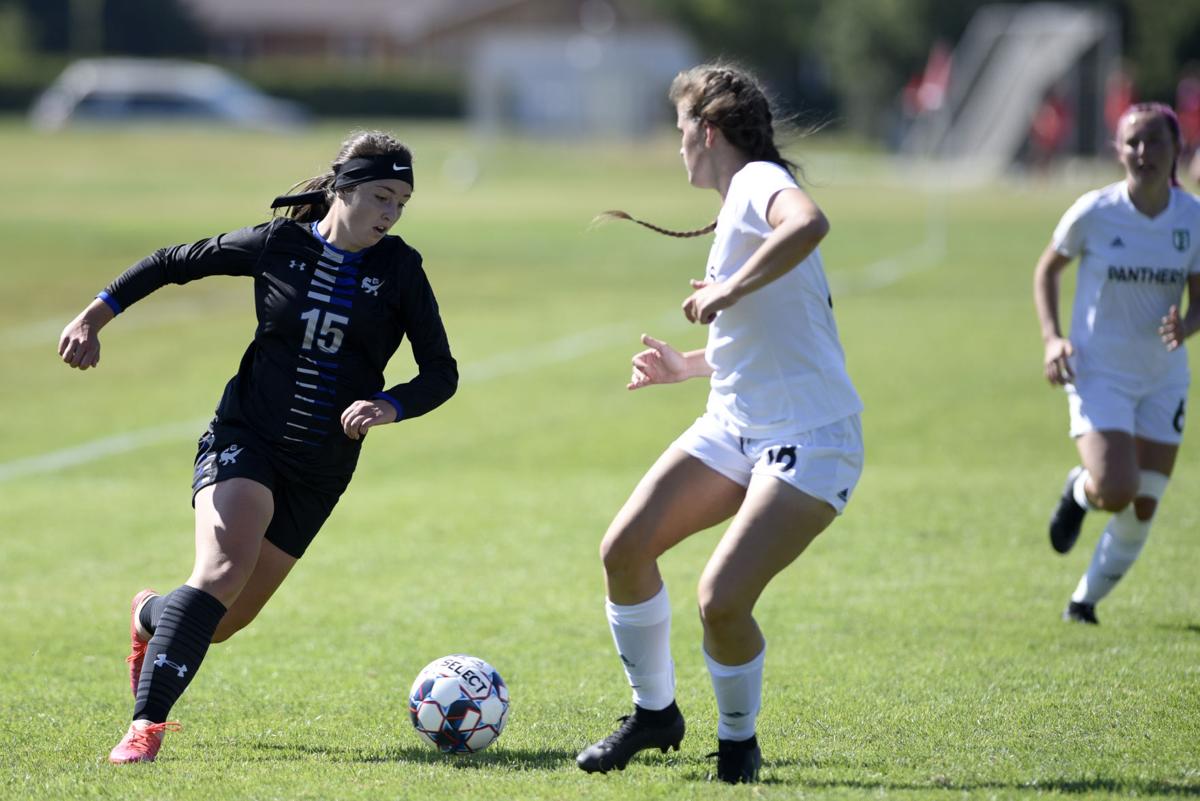 Gallatin's Maria Matosich changes direction to get past a Belgrade defender Saturday at Bozeman High.

Gallatin's Olivia Collins heads to the net before scoring the game’s opening goal against Belgrade on Saturday at Bozeman High.

Gallatin's Olivia Collins heads toward the net before scoring her third goal of the day against Belgrade on Saturday at Bozeman High.

Gallatin's Maria Matosich changes direction to get past a Belgrade defender Saturday at Bozeman High.

A Belgrade player tried to corral a pass, but missed, and Olivia Collins was right behind to take advantage of the opportunity.

The Gallatin sophomore secured the ball, and only the Belgrade goalie stood between her and the net. She juked multiple times. The goalie mistimed her save attempt and dove to the ground. From the right side of the net, Collins converted on the scoring opportunity.

That was for a hat trick. And she wasn’t finished.

Collins scored four goals to lift the Raptors to a 5-2 Eastern AA win over Belgrade on Saturday at Bozeman High.

Collins believes it’s one of the best performances of her young career. But she emphasized how important the rest of the Raptors were in making it happen.

“It’s honestly a team effort,” Collins said. “I don’t think anyone did any more than anyone else. This season we’ve been really focusing on team principles like being dedicated to each other more than ourselves. And I think that really came out in this game, and that’s what helped us win the game.”

Gallatin head coach Joel Ganey suspected Belgrade would defend well. The Panthers (0-4-2) were organized, Ganey noted. So the Raptors emphasized their play in the midfield, and by doing that, created space for Collins to operate near the net.

Collins noticed the Panthers put more pressure on Gallatin’s forwards as the game went on. But the Raptors remained aggressive and found gaps in Belgrade’s defense.

“When we know (Collins) can go out and do that, and we can combine and then find her and we can go off of it, it just frees her up to play the way we want to play,” Ganey said. “We’ve got our principles, and we like to play in our style, no matter who we’re playing against. When we know she’s capable of doing that and we can find her and she’s an outlet, it really frees us to be comfortable and confident.”

Ganey said Collins possesses several tools which allow her to stand out. Her abilities, he added, open up possibilities for the rest of the team.

Belgrade head coach Carl Bridwell knew how talented Collins would be, and he believes her quickness, aggression and calmness in front of the net allowed her to thrive.

“Our team works really hard, but we’re playing with skin and bones,” Bridwell said. “It’s kind of the next man up and seeing how we can play through that. Every game is going to be a grind in some capacity like this.”

The Raptors (3-2) have enjoyed some success early on in their first season. They are now on a three-game winning streak, and will play Bozeman next week. Ganey said his players have been willing to work on specific skillsets that allow them to execute their particular style of play.

Collins noted how much the Raptors have learned about the game and about each other early on after a few weeks of practices and games.

“We’ve already gotten a lot better,” she said. “That’s helped us a lot in these last few games, and I think we’ll just keep getting better.”

Ganey specifically pointed to Gallatin’s work ethic. The Raptors have worked for each other and have learned to rely on one another.

Collins’ performance, set up by the rest of her team, is an example of that.

“For us, it’s a process,” Ganey said. “We’re trying to get better and better every game, so that when we get to that playoff, we’re ready.”