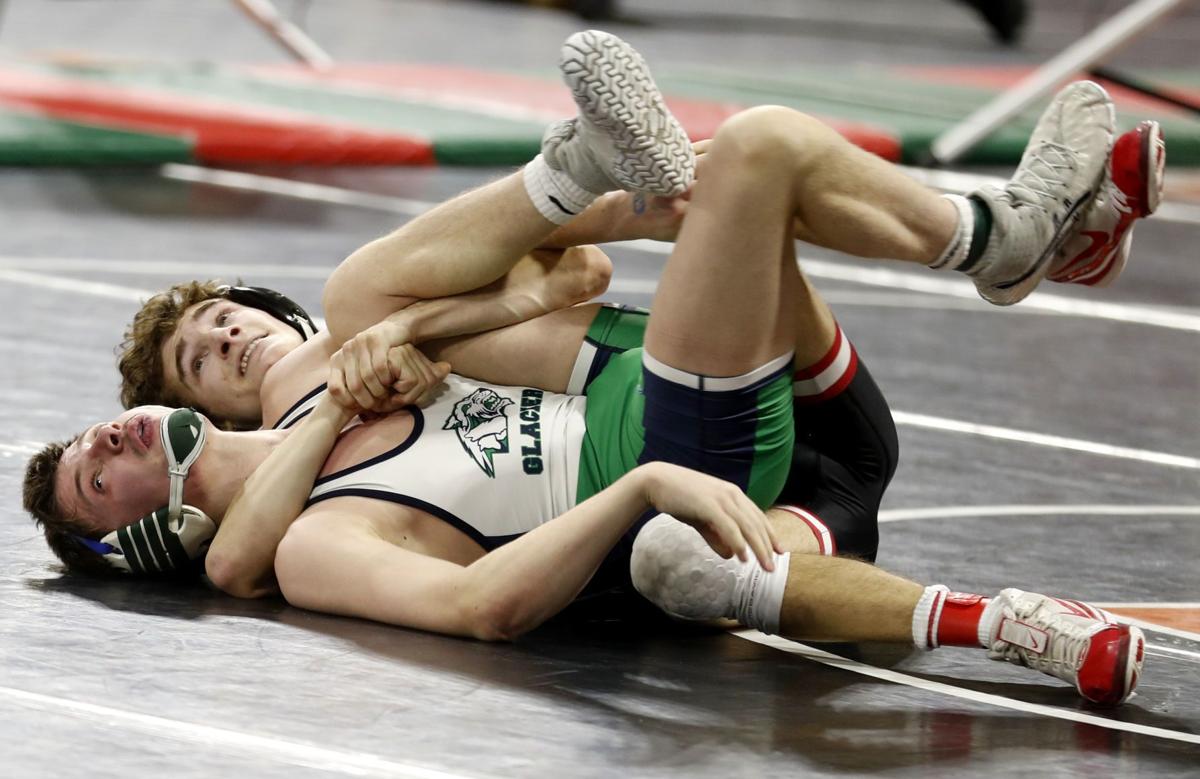 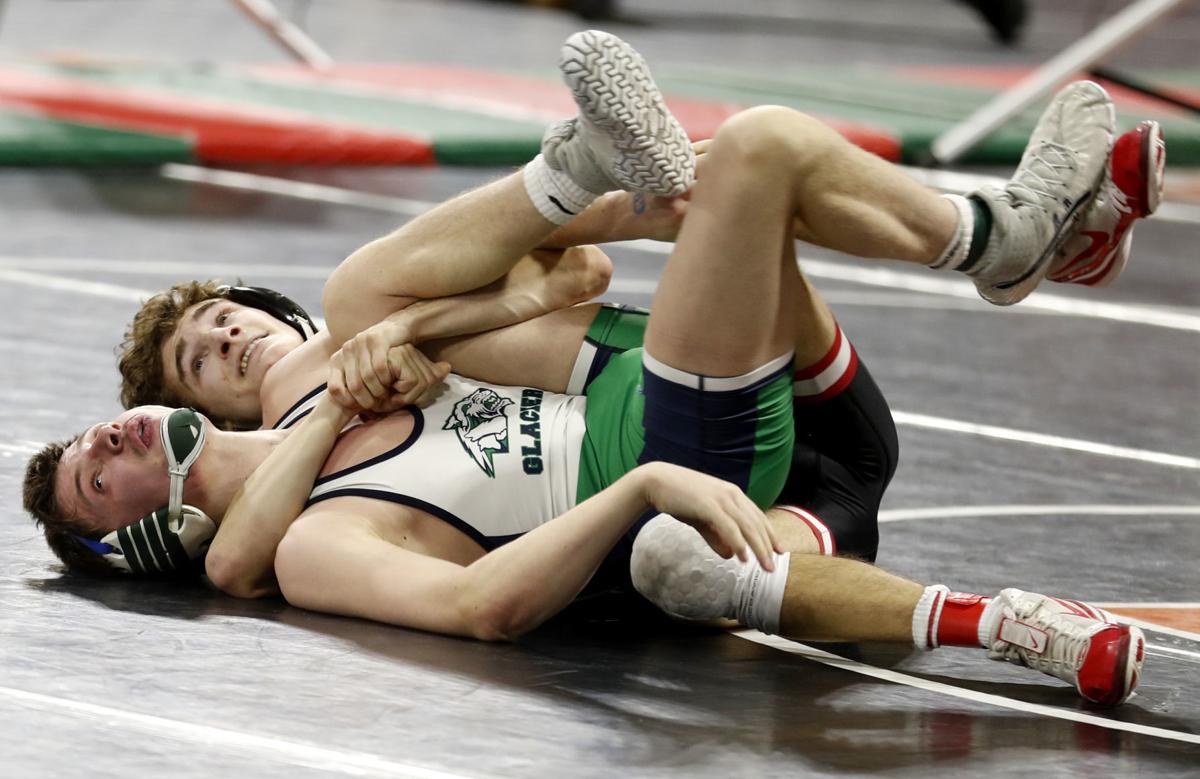 Kalispell Glacier's Bridger Beach wrestles Bozeman's Taylor Wiers in a 126-pound match in the first round of the Class AA tournament Friday in Billings. 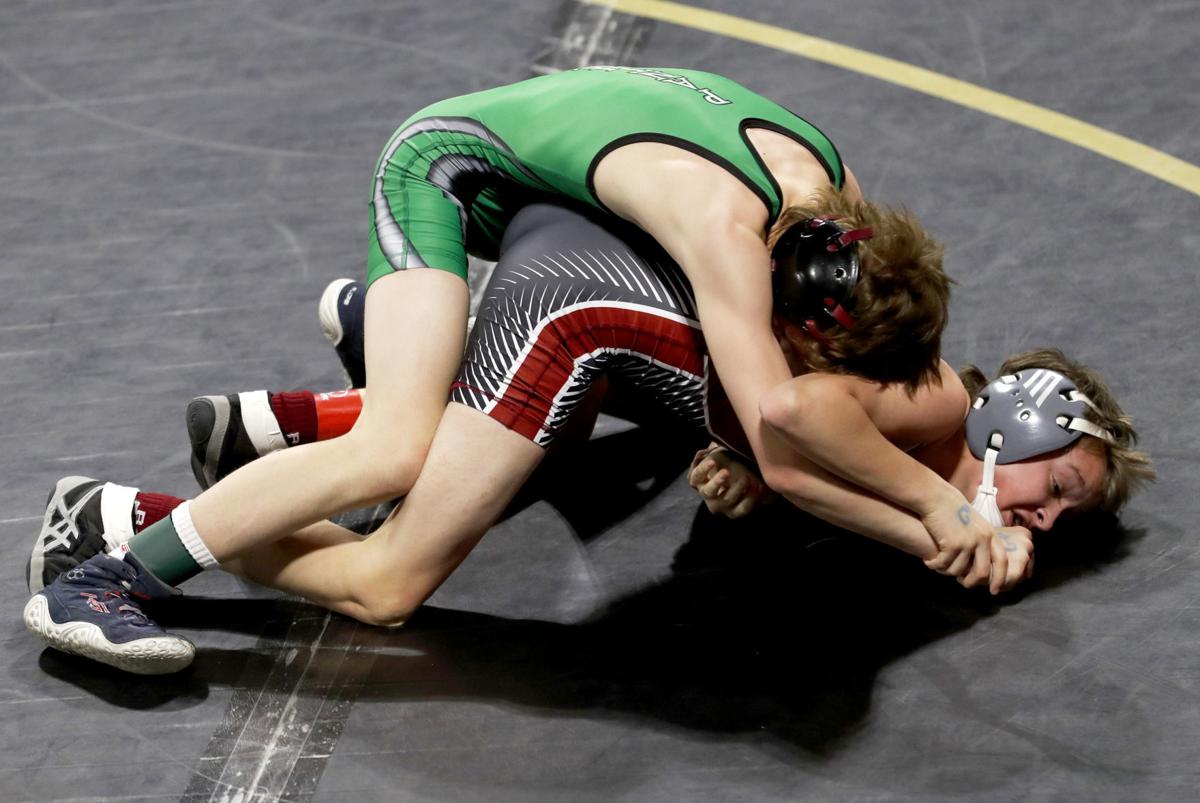 Belgrade's Colton Gutenberger wrestles Helena's Jason Mandy in a 103-pound match in the first round of the Class AA tournament Friday in Billings.

Kalispell Glacier's Bridger Beach wrestles Bozeman's Taylor Wiers in a 126-pound match in the first round of the Class AA tournament Friday in Billings.

Belgrade's Colton Gutenberger wrestles Helena's Jason Mandy in a 103-pound match in the first round of the Class AA tournament Friday in Billings.

Thomas Walkup’s routine before every tournament is designed to be simple.

It starts with the week leading up to it. The 285-pound Bozeman senior makes sure to keep it as normal as possible. Nothing too exciting. He works out the day before. He needs to focus.

Immediately before his first match, he stretches. He takes a deep breath. And he gets to work.

Walkup pinned his first two opponents on his way to becoming one of four Bozeman wrestlers to advance to the Class AA semifinals on Friday in Billings.

“In the end, practice and preparation plays a big part,” Walkup said. “You’ve got to go hard everyday knowing you work hard and just go out and get it done.”

Walkup, Avery Allen (132 pounds), Leif Schroeder (138) and Brock Rodrigues (145) all have a shot to win individual titles on Saturday. Hawks head coach Nate Laslovich described the first day of state as a rollercoaster, but those four, who all advanced to their respective Eastern AA Divisional championship matches last week, were dependable.

“They went out and took care of business,” Laslovich said. “They wrestled really solid matches and went to work and did what they were expected to do. I think they wrestled with a lot of intensity and performed well.”

Walkup complimented his teammates for their collective mindset, knowing the task in front of them. As a whole, 12 of the 19 Hawks who made the state tournament moved on to the second day. Bozeman, the reigning team state champion, is fifth with 94.5 points. Great Falls leads with 127.

That’s why Laslovich said Saturday is vitally important for everyone to excel.

“We were up and down,” he said. “I think we had some really good performances. Everybody battled hard. I was proud of the way the guys wrestled.”

Surrounded by a large and noisy crowd, Laslovich doesn’t think the Hawks were intimidated. He pointed out many of his wrestlers had experienced that type of environment before.

Allen, a freshman, didn’t have a problem with it.

“It’s a lot different,” he said. “Definitely a lot more people and more exciting. It’s cool having your fans cheering you on when you win. It’s a good atmosphere.”

Schroeder won by fall in 12 seconds in his first round and 1:22 in the quarterfinals. Rodrigues also won his first two rounds by fall in a collective 3:31.

Allen, meanwhile, needed just 1:20 to pin his first opponent and 34 seconds to win by fall during the quarterfinals.

“It’s definitely what everyone hopes for is a quick pin,” Allen said. “Obviously that’s never always going to happen, but it’s definitely a relief going out and pinning him quick.”

Allen emphasized that the Hawks need to maintain belief that their work until this point will pay off. Laslovich is hopeful the Hawks can pick up extra points for the team standings with more pins.

“These guys just have to win matches,” Laslovich said. “It’s do or die right now. So we got to go out and battle, scrap and fight for everything and good things will happen for us.”

Walkup stressed how he needed to keep honed in on each match ahead of him, not lingering on the past or thinking ahead to a possible championship berth. After Friday’s matches, he planned to settle back down, eat, stay off social media and sleep well.

All part of his routine.

“The mental approach tomorrow is just knowing you’ve got other guys to wrestle and just knowing it’s one match at a time and being focused,” Walkup said. “You can’t really go out of your way to change anything up. Just focus on what I’m going to do tonight and be mentally prepared.”

Carter Schmidt of Belgrade advanced to the Class AA semifinals as well at 113 pounds.

He defeated both of his opponents in the first two rounds via pin. He beat Nate Preston of Great Falls CMR in 2:16.

Xaden Cunningham will also compete on Saturday. He lost in the quarterfinals to Billings Skyview’s Brenner Bushfield by technical fall, but he bounced back to win over Jason Langan of Bozeman by a 2-1 decision.

Forrest Fairbanks and Coltin Siphakis will represent Manhattan in the Class B/C semifinals on Saturday.

Fairbanks, at 138 pounds, won both of his first two matches by pin, beating Shane Reishus of Thompson Falls by fall in 2:59. Siphakis, a 145-pounder, defeated his first two opponents by fall as well, pinning Colt Crawford of Arlee in 3:39.

After falling in the first round, 160-pounder Garrit Weeda beat his next two opponents in the consolation bracket to continue on to Saturday.