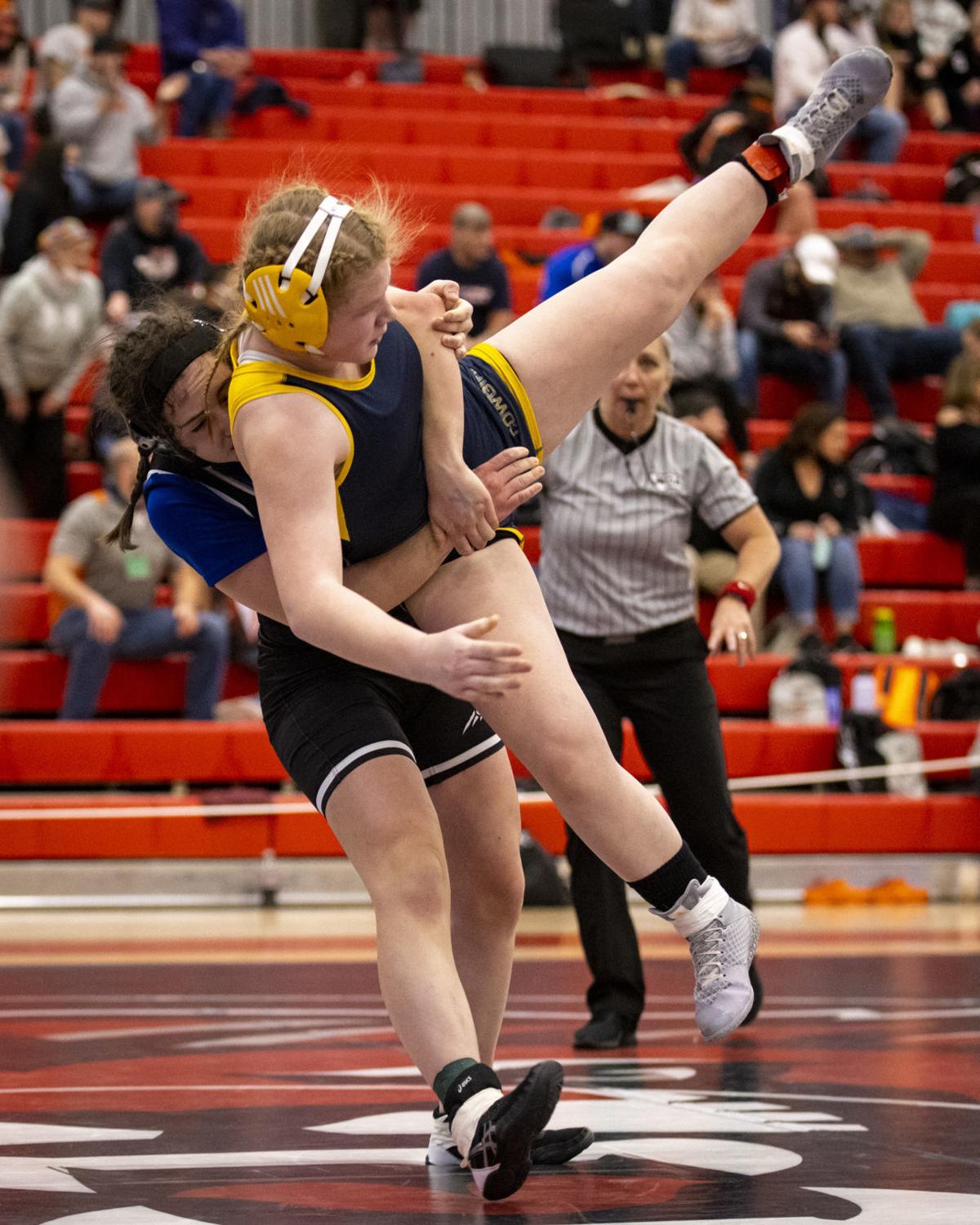 Nate Laslovich had no doubt Gallatin would be winning its first state championship for any sport this weekend. In fact, the Raptors head coach said he would’ve been surprised if that didn’t happen.

“It feels amazing,” Schultz said. “I’m excited to create history for the school and help create a culture for everybody.”

Schultz said earning the school’s first state title at the first girls state wrestling tournament was a goal of hers.

“I wanted it bad enough,” she said. “It felt amazing. The tournament was really good for the girls. It felt good to have our own state tournament. It’s amazing how far we’ve come.”

In a 9-0 season, Schultz said dedication was a critical piece of the puzzle.

“I just work hard and show up every day,” she said. “Consistency is key.”

With a bye to start the tournament, Schultz pinned all three of her opponents on the way to a title. She defeated Jaylen Kinzel of Colstrip in 35 seconds in the quarterfinals, Gracy Jones of Billings Senior in 50 seconds in the semifinals and Derlatka in 1:20 in the championship.

“It was super exciting,” Laslovich said. “She’s a really, really hard worker. Great kid and very deserving. For our school, it’s a huge deal. Obviously we don’t have much for trophies in the trophy case, but that’s a big one.”

Laslovich noted Schultz dealt with “some adversity” as she was nearly pinned in the title match. But she fought through that to win.

“She showed really how tough she is,” Laslovich said. “She’s a really strong-willed kid and extremely hard worker.”

Laslovich recalled Schultz, earlier in her career, once was slammed on her back and pinned while competing against a boy. Laslovich thought it seemed painful.

Though her opponent offered to help her up, Schultz jumped up to her feet and shook hands with the victor and his coach. She then returned to her team’s bench and talked to Laslovich.

“I don’t know who he thinks he is,” Laslovich remembers her saying. “I don’t need help.”

“That attitude and that toughness, you have that or you don’t, and Lily has that,” Laslovich added. “It’s just a different level than most people. She’s highly technical and practices really hard. And she’s a student of the sport. … Really high wrestling IQ. Just all those intangibles make her really good.

“She’s going to be wrestling at whatever level she wants to. … She’s special.”

After a bye, Matosich pinned three straight opponents on her way to the title match. She defeated Chloe Houlihan from Frenchtown (4:56), Kaylee Barber from Missoula Hellgate in the quarterfinals (2:45) and Kya Gilmore from Custer County in the semifinals (4:58).

Mariah Wahl of Cut Bank won in the championship against Matosich by fall. However, Laslovich said Matosich’s run was impressive considering this was her first year wrestling.

“That’s an amazing feat too,” Laslovich said. “She beat kids that have been wrestling their whole lives.”

Matosich was nearly pinned in the semifinals match, Laslovich noted. But she ended up avoiding that. Laslovich highlighted her perseverance in that victory.

“She had a very gutty semifinal win,” Laslovich said. “She had an outstanding year.”

With just those two wrestlers, Gallatin tied Belgrade for sixth in the team standings with 54 points out of 47 programs. Flathead won with 142 points.

Norah Larson made the championship match for the Panthers at 205 pounds.

After a bye to start, Larson pinned Haylee Fetters of Cut Bank in 45 seconds. Larson then defeated Cascade’s Skye Smith by fall in 38 seconds in the semifinals.

Kassidee Savaria of Billings Skyview won the title match against Larson by fall in 32 seconds.

Gushi began the tournament by pinning Kaaliya Schmitt of Harlem in 34 seconds, but then she lost to Boston Howell from Flathead by fall in the quarterfinals.

Gushi won her next two matches in the consolation bracket by pinning Savanna Buckman of Harlem (30 seconds) and Trisity Deason of Custer County (25 seconds).

In the consolation semifinals, Cabry Taylor from White Sulphur Springs pinned Gushi. Then Gushi bounced back to beat Howell by pin in 55 seconds.

Though she lost in her first match of the tournament, Belgrade’s Maya Amundson fought back to take sixth at 138 pounds.

After a bye, she lost to Kera Moreno from Butte via pin. After another bye, Amundson pinned Kayla Peterson of Kalispell Glacier (2:49), Coral White of Billings Senior (2:16) and Kaylee Barber from Missoula Hellgate (1:39) in the next three consolation rounds.

Allie Murphy also helped Belgrade by defeating Liviya Atwood from Billings Senior with a 7-5 decision in the second consolation round at 126 pounds.

Bozeman’s Jenavieve Lynch placed fifth at 205 pounds. In her final match of the tournament, she defeated Lucille Libby of Flathead with a 13-9 decision.

Lynch opened the tournament by pinning Aaliyah Stiffarm of Havre in 3:58. Then in the quarterfinals, Billings Skyview’s Kassidee Savaria pinned Lynch in 3:03.

Lynch then won her next two matches against Olivia McCally of Shepherd (2:13) and Shannen Todd of Glacier (1:52) by fall. Skye Smith from Cascade pinned Lynch in 4:17 in the consolation semifinals.

When adding a state tournament for girls wrestling in Montana, this opened up more opportunities for competition. Laslovich pointed out hundreds of girls have wrestled at the youth levels in the state for years. But those numbers dwindle, Laslovich said, because of a lack of chances to compete against other girls.

Laslovich was happy to see many at the state tournament had been involved with the sport since they were young.

“They’re super skilled and very experienced, and that was one thing that was impressive. You saw a lot of high-level wrestling,” Laslovich said. “To see those girls competing against each other, it was amazing. It was a well put together tournament. It was, I thought, great competition. The kids all battled really hard. It was loud and fun. It was a great atmosphere.”