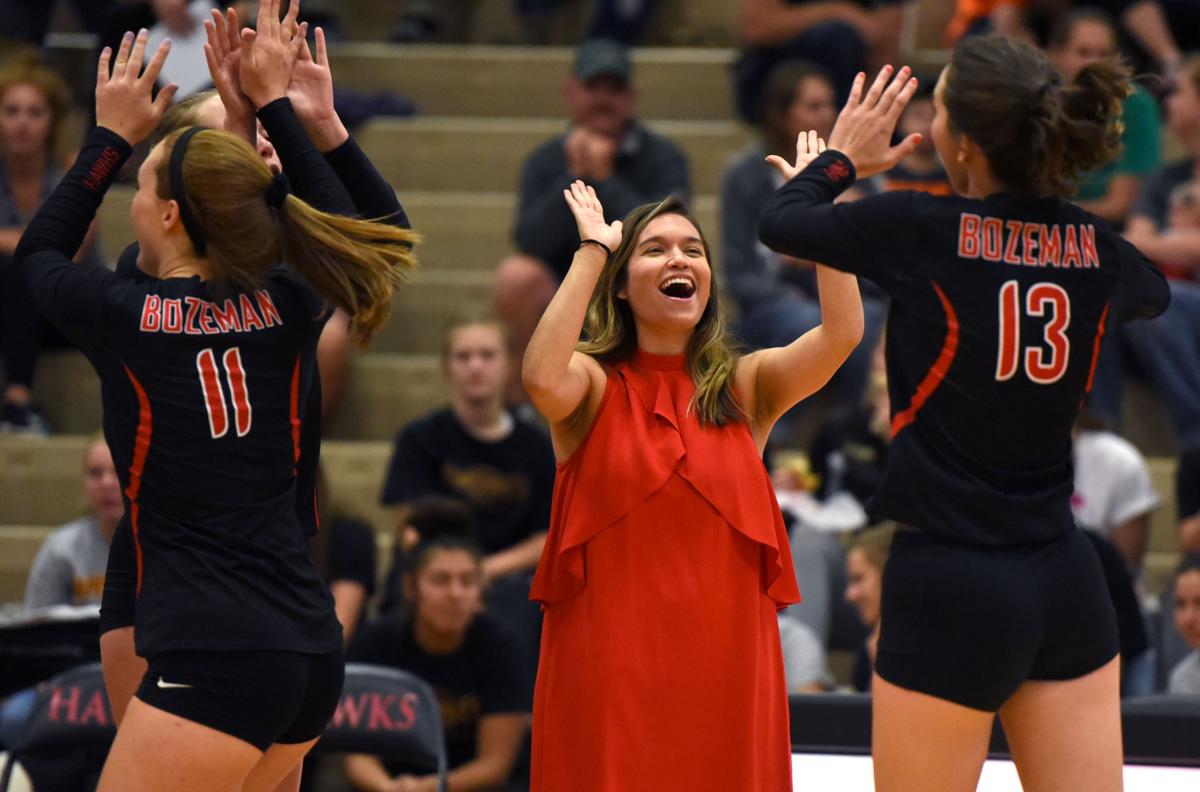 Ashley Obstar teaches her players to pick each other up whenever one of them is down.

For the Gallatin head volleyball coach, that could mean teammates lending a hand whenever someone has fallen to the floor. Or that applies to when an athlete makes a mistake and others should pat her on the back to show emotional support.

That encouragement, Obstar said, will have to look drastically different this fall.

The Montana High School Association outlined its approach to allowing sports this fall, which was announced Monday. Administrators are already preparing for the challenges of meeting the altered guidelines and requirements because of the coronavirus pandemic.

Bozeman and Gallatin coaches know they must adjust to new parameters, including social distancing when possible. But they’re willing to if it results in opportunities for high school athletes to compete.

Hawks head football coach Levi Wesche said his staff feels “as safe as they can be without just living in a bubble.”

“My personal feeling is at some point we’ve got to get back to living life,” he said. “I personally feel like we have a duty to these seniors and young men to let them have as close to a normal high school experience as they can before they move on into the real world.”

Obstar, Wesche and Bozeman cross-country head coach Casey Jermyn all expressed confidence in the MHSA’s reasoning. If officials feel sports are safe to play, Obstar added, she will be ready to lead her first-year program.

Wesche has virtually communicated with his team often this offseason. He feels most of his players were more nervous that they wouldn’t have a shot at playing than the possible risk. At the same time, Wesche stressed he wants to be conscious of restrictions and sensitive to families’ concerns.

“This fall is going to be challenging,” Jermyn added. “It’s not going to look the same. There’s going to be a lot more work on administrators, on coaches, to try to make this season happen safely. In the end, we can all agree that we want what’s safest for the kids. We want them to return to play.”

Wesche already considers himself adjusted to most of the MHSA’s health guidelines because his program had been enacting the same rules during offseason workouts and camps. For example, they trained in small groups of the same people and limited contact with any other players.

Obstar noted how she had to become creative with her volleyball camps. Players used all six courts available to them with no more than 15 players and one coach at each court. All involved wore masks when they entered the building. The players also checked in and went through COVID-19 screening questions online.

Obstar and Wesche said they both dealt with athletes who were in contact with family members who became ill. In both instances, the athletes stayed at home, which Obstar stressed is the expectation.

Wesche, Obstar and Jermyn said they haven’t yet dealt with positive coronavirus cases among athletes this summer. Jermyn pointed to this as a positive sign regarding the outlook of the fall.

“I know things are going to be different,” Obstar said, “and that’s going to be difficult to navigate, but I think whatever the new regulations are, anything is better than not playing volleyball.”

Obstar highlighted the MHSA’s innovation in its guidelines. She added, however, some may be tough to adapt to.

Wesche noted how event attendance may be drastically different than before. The MHSA doesn’t specify universal rules, rather allowing each school’s county to dictate fan allowance.

In Gallatin County, the Bozeman Bucks have allowed fans at their American Legion games. But county health departments in Montana have handled summer baseball and other events differently, which could affect high school sports in the fall.

Wesche isn’t sure what to expect. He hopes, at minimum, parents of students will be allowed to watch games from the stands. But he also recognizes attendance may be different depending on where the Hawks play.

“I think one of the reasons our kids love playing the game is they love representing their community,” Wesche said. “It’s a little disheartening if we end up playing in front of empty stands. It would kind of be a bummer. But again, you’ve got to do what you’ve got to do. At least we get to have a season. You’ve got to take the positives where you can get them.”

Jermyn expressed confusion about some rules. The MHSA will allow only 25 cross-country runners at the starting line at a time, but Jermyn pointed out that’s three runners shy of four teams. He wonders why 21 or 28 runners aren’t allowed.

He’s also curious if some rules like this will be adjusted. But he is optimistic about the inventiveness possible with cross-country because of the nature of the sport. An event can be spaced out across a whole day, for example, which allows for more social distancing.

Bussing is another concern for Jermyn. He wonders how many athletes can travel as the MHSA is allowing only 200 at a meet and how many more busses will be necessary if athletes need to socially distance themselves.

“I just don’t think there’s room in the budget, and also we just don’t have the bus power,” he said. “Cross-country just doesn’t need five to six busses to get to a meet. So I think, in effect, that’s going to limit your travel roster.”

But Jermyn believes these hurdles are worthwhile if fall sports safely happen. Wesche and Obstar agreed.

Wesche noted the possibility of a team being unable to play because of an outbreak which may lead to a forfeit of games or an interruption in the season of a specific sport. He’s hopeful MHSA guidelines will be enough to prevent that from happening.

“I don’t know if burying our heads in the sand or locking ourselves down all the time is the greatest way to go either,” he said. “I think that’s really hard to lose the social aspect for our young people. I think it’s extremely difficult.”

Obstar, Jermyn and Wesche said they had not yet dealt with negative feedback about the MHSA’s plans to return to play. They said many involved with their programs were relieved by the idea of a possible season.

Jermyn said, for many of his runners, cross-country is “a big part of their lives and their identity.” He’s heard a few concerns, but he added he’s open to taking them into account. He wants athletes to be safe. For the sake of contract tracing, he’s checked in with them often to see who they’ve interacted with. He’s also had hand sanitizer available during offseason workouts.

“We want to do our part to mitigate this thing as much as we can,” Jermyn said. “Overwhelmingly, the response has been hopeful that a season happens and (families) want to see their kids out there and engaged socially and part of a sport.”

Obstar said she is “conservatively confident” and also maintains some “conservative skepticism” about this fall. She was nervous a fall season may not happen, and that worry did not disappear this week.

For now, she’s happy her players have something to look forward to.

“Since everything changes so rapidly, I don’t want to have a false sense of hope,” Obstar said. “So I just think we’re keeping it in mind that we’re really excited that, as of now, we’re going to have a season. But at any point, anything could change rapidly.”