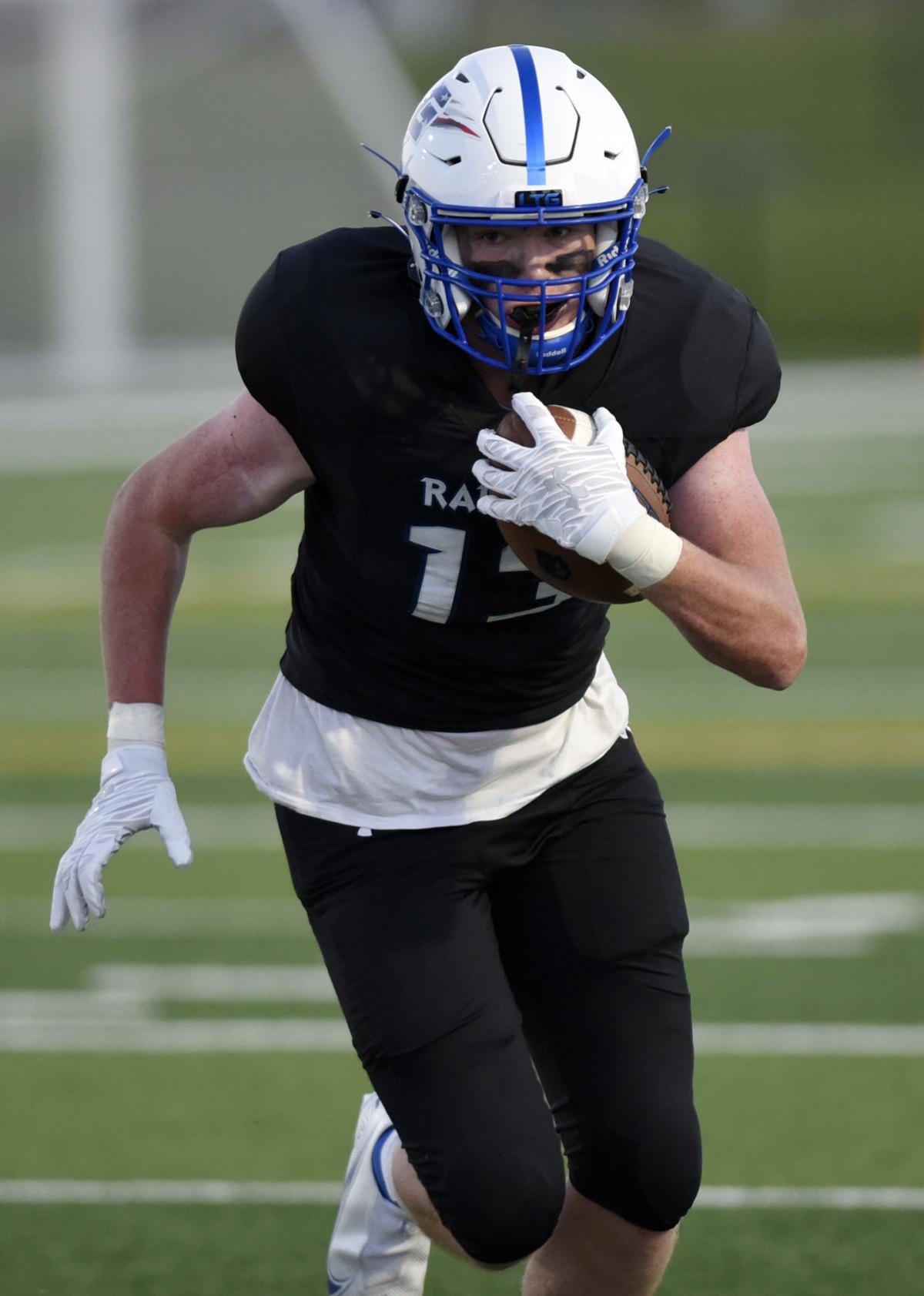 Gallatin's Rylan Schlepp heads for the end zone before scoring the Raptors’ first touchdown against Great Falls on Friday at Van Winkle Stadium. 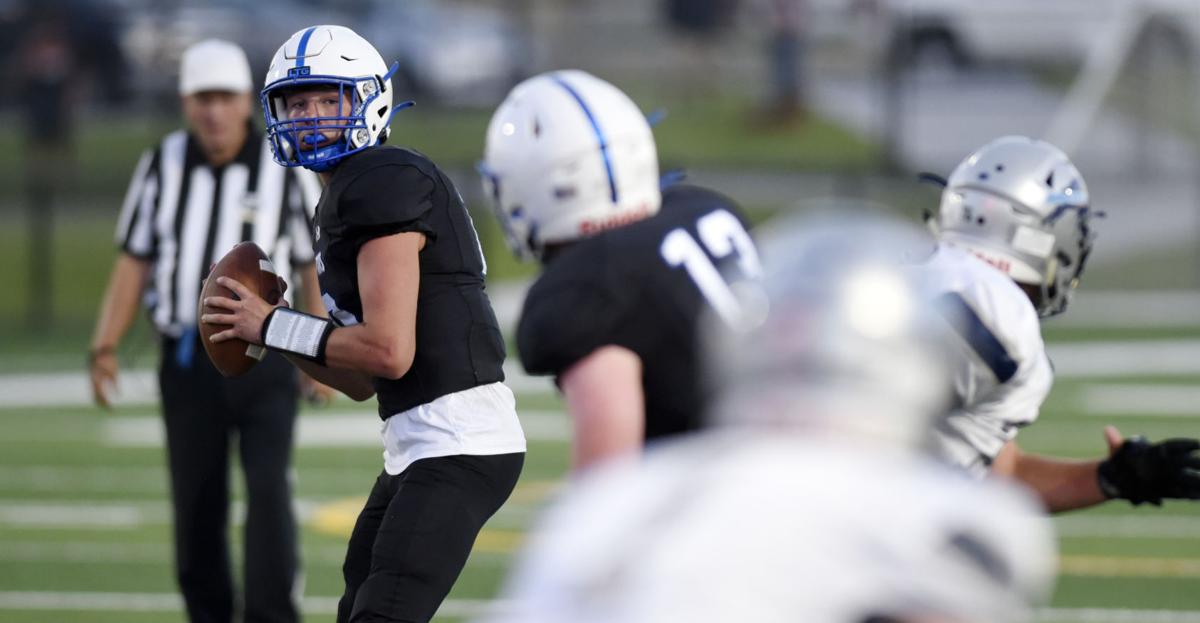 Gallatin's Braeden Mikkelson looks for a receiver against Great Falls on Friday at Van Winkle Stadium. 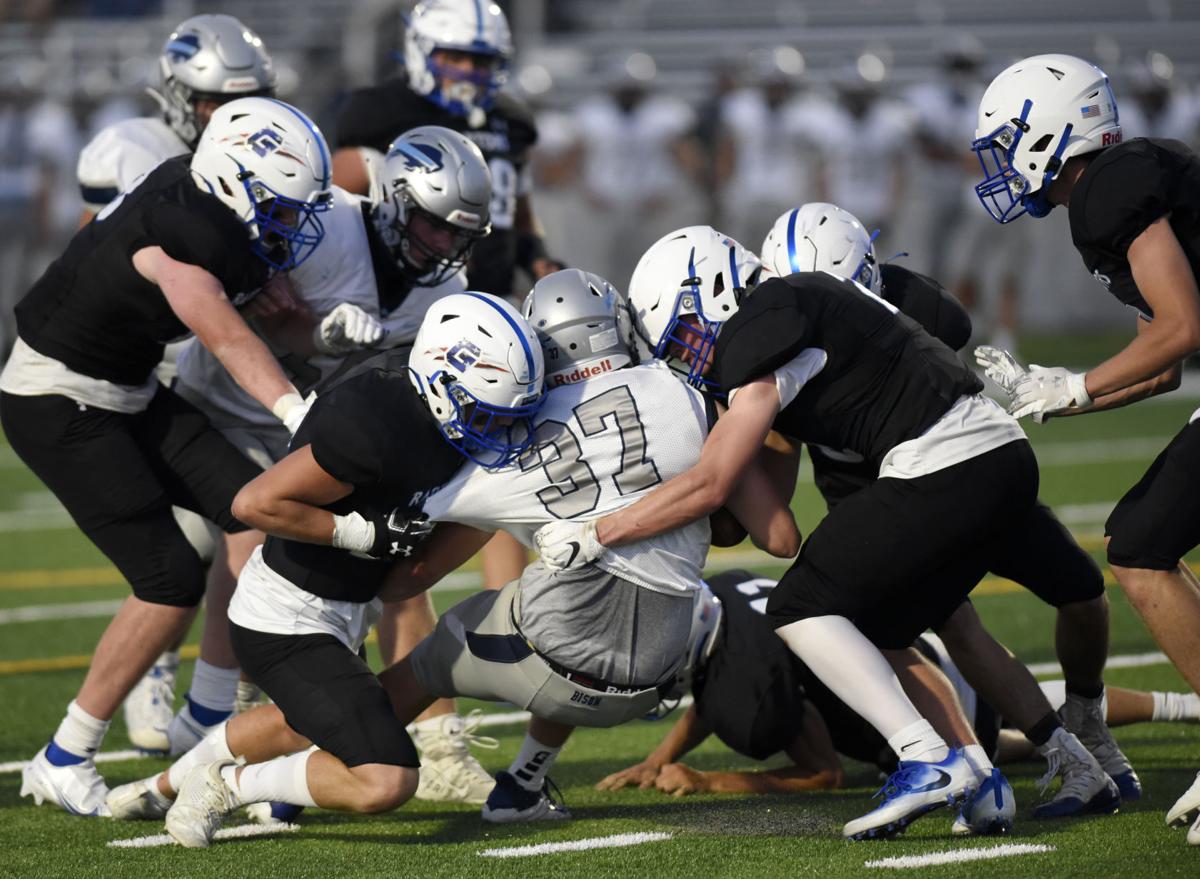 A group of Raptors take down a Great Falls ballcarrier Friday at Van Winkle Stadium.

Gallatin's Rylan Schlepp heads for the end zone before scoring the Raptors’ first touchdown against Great Falls on Friday at Van Winkle Stadium.

Gallatin's Braeden Mikkelson looks for a receiver against Great Falls on Friday at Van Winkle Stadium.

A group of Raptors take down a Great Falls ballcarrier Friday at Van Winkle Stadium.

After catching an easy pass near the sideline, Rylan Schlepp dashed into the endzone for a touchdown and a milestone.

This was Gallatin’s first-ever touchdown. The Raptors bolted to meet Schlepp under the Van Winkle Stadium scoreboard. The 6-foot-3, 220-pound tight end celebrated when his quarterback, Braeden Mikkelson, ran to greet him.

The last few weeks, Raptors head coach Hunter Chandler preached that, no matter the final result, he wanted to see a competitive edge from his players in their inaugural season. On that scoring drive, though the Raptors were trailing by three touchdowns before that, Chandler had what he wanted.

Through mistakes, the Raptors showed moments of promise. But in their first game, the Raptors could not overcome those errors as Great Falls’ Levi Torgerson scored on the opening kickoff and returned two interceptions for scores. The Bison secured a 48-14 Eastern AA win on Friday at Van Winkle Stadium.

“I think our kids did compete,” Chandler said. “They were ready to go. And I thought they gave a great effort.”

In limited numbers and wearing masks because of the coronavirus pandemic, fans consistently stomped on the bleachers, clapped and cheered to provide the Raptors some home-field energy. This was even despite the Raptors trailing from the beginning.

Torgerson caught the opening kickoff near his own end zone and returned it 95 yards for a touchdown. Midway through the first quarter, Torgerson read a quick slant, picked off a Mikkelson pass and returned it 50 yards for another score and a 14-0 lead.

For every impressive play or drive the Raptors put together, Great Falls replied. Late in the first quarter, the Raptors appeared to halt a Great Falls drive with a tackle for loss. But on the next play, Bison quarterback Reed Harris took off for an 84-yard touchdown run and a 21-point advantage.

That’s when the Raptors showed some spark. Mikkelson picked apart the Great Falls defense, throwing darts to his receivers for intermediate gains, even after runs for loss or incomplete passes to open receivers.

After keeping a drive alive on a fourth-down run in the red zone, Mikkelson capped it off with an 8-yard touchdown throw to Schlepp.

“I think the kids played hard,” Chandler said. “Obviously got punched in the mouth in the beginning with that kickoff return. It wasn’t a great way to start, but I thought the kids bounced back and settled in for a little bit.”

Afterward, Gallatin’s Noah Dahlke recovered a Bison fumble in the second quarter, but the Raptors coughed up the ball and Great Falls’ Ryan Krahe punched in a 1-yard touchdown run.

Even after the Bison lead had been built back up, Gallatin’s coaches, audible with limited attendance, repeatedly reminded their players there was “a lot of game to play.”

Late in the second quarter, Gallatin sophomore defensive lineman Gannon McGarrah tracked down a screen pass, picked it off and nearly returned it for points. But the Raptors finished it off when Schlepp caught a screen pass from Mikkelson, plowed past Great Falls defenders and reached the ball across the goal line for another touchdown.

“He’s just a big, strong kid,” Chandler said of Schlepp. “He’s got a motor, and he’s awesome. He played great tonight. He definitely flashed during camp. We knew what we had in him, and really what he did tonight is what we saw all of camp.”

Corbin Holzer later forced the third Gallatin takeaway near their own end zone. The Raptors tried to make the most of the final seconds of the first half, but Great Falls picked off a pass on Gallatin’s side of the field. And with nine seconds left, Harris threw a 41-yard touchdown strike to Torgerson, his third of the game.

Gallatin’s defense shored up its mistakes in the second half, not allowing many more explosive plays. However, Torgerson intercepted a pass in Great Falls’ own end zone and returned it 105 yards for another TD. Then Krahe returned a blocked Gallatin punt for another touchdown with less than eight minutes remaining.

“Coming out in the second half, I thought we battled,” Chandler said. “We kept ourselves in it. Then that pick-six, that did us in at the goal line there. Everyone let their heads down. That’s just a point of emphasis for us is continuing to battle no matter what happens.”

The Raptors offense compiled multiple methodical drives after halftime, but could not capitalize.

In the third quarter when Gallatin’s drive was halted, Mikkelson found a receiver in the back of the end zone, but his pass sailed out of bounds on fourth down. On the ground, his teammates helped their quarterback to his feet. The Raptors jogged back to the sideline, ready for the next possession.

“Not the outcome we wanted, but definitely saw some good stuff, some stuff we could build on,” Chandler said. “Now it’s just time to break down some film and see what we can get better at next week.”