Gallatin running back Corbin Holzer looks for an opening Sept. 19 at Belgrade. 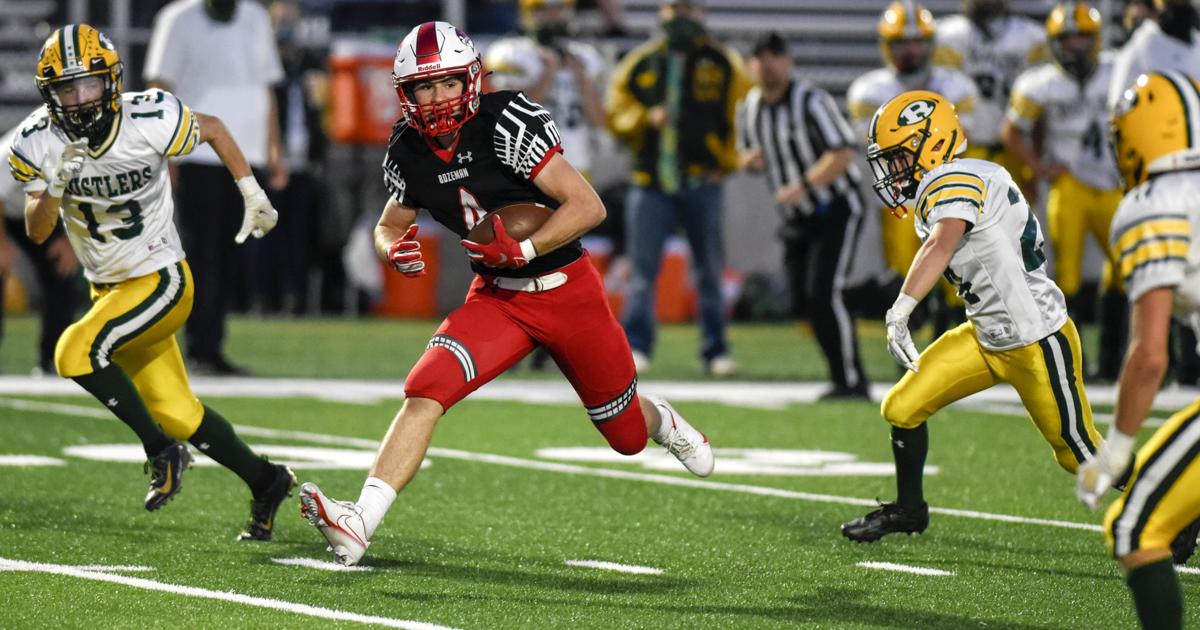 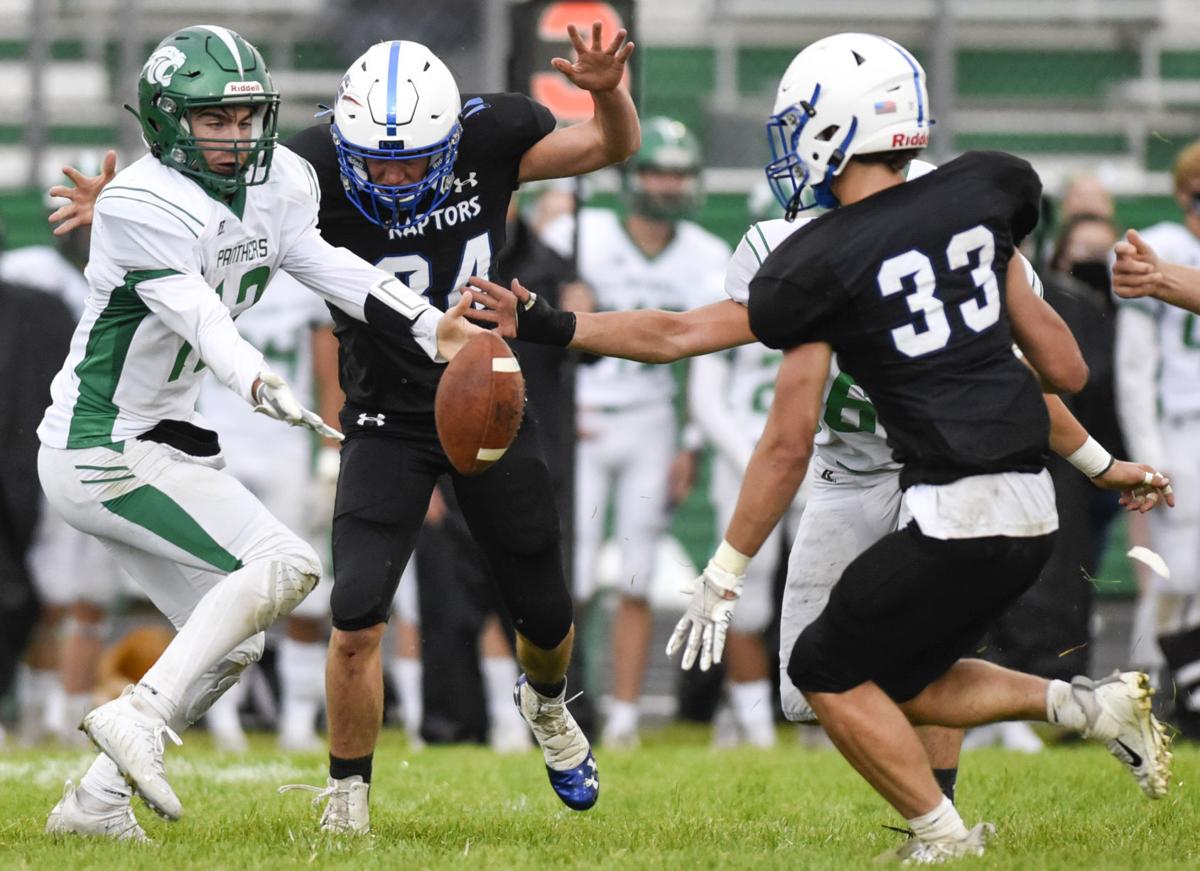 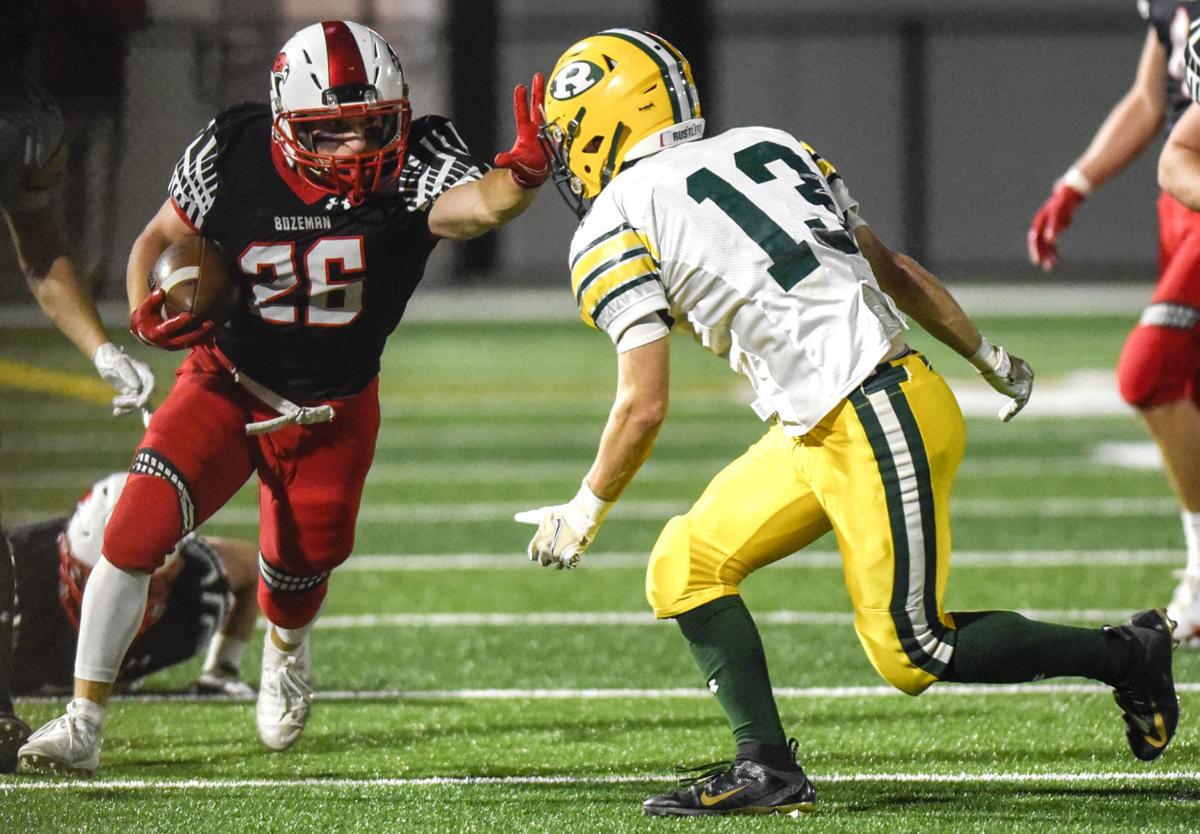 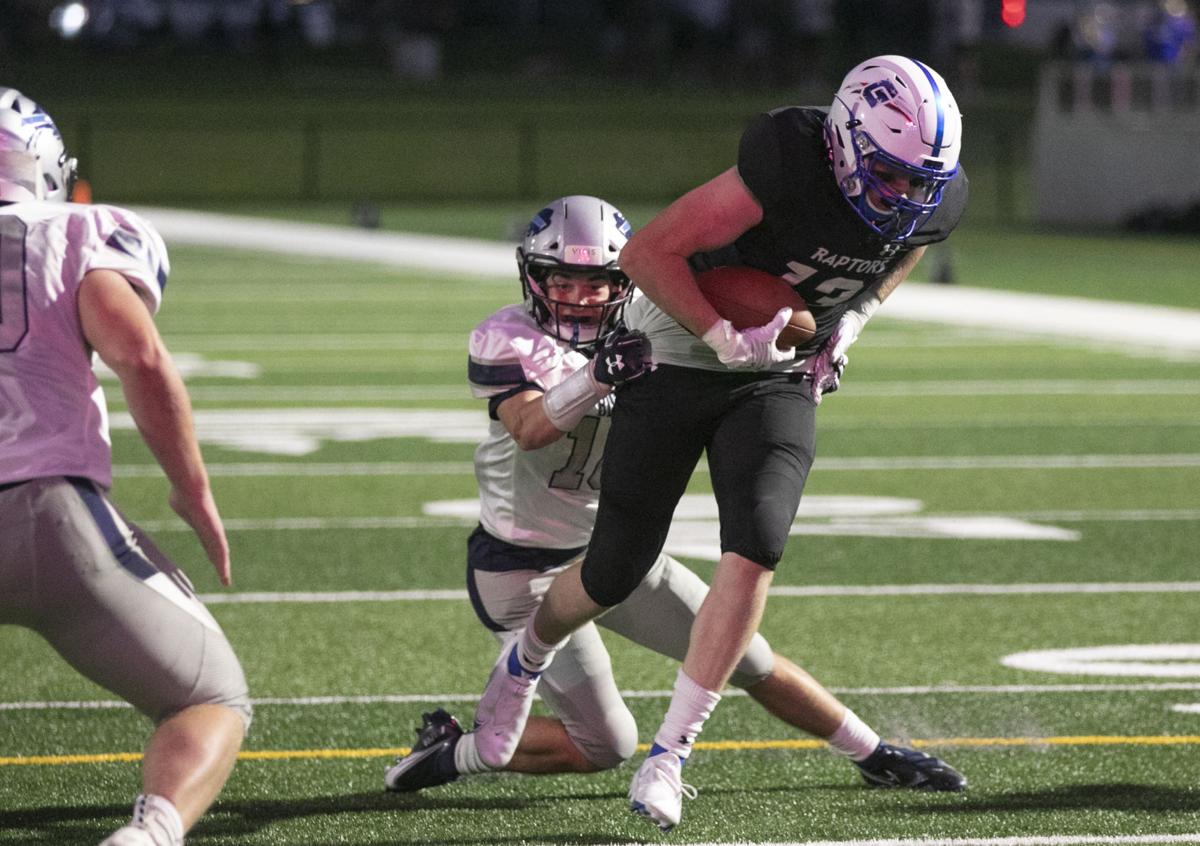 Gallatin's Rylan Schlepp sheds a tackle before scoring his second touchdown of the day against Great Falls on Sept. 11 at Van Winkle Stadium. 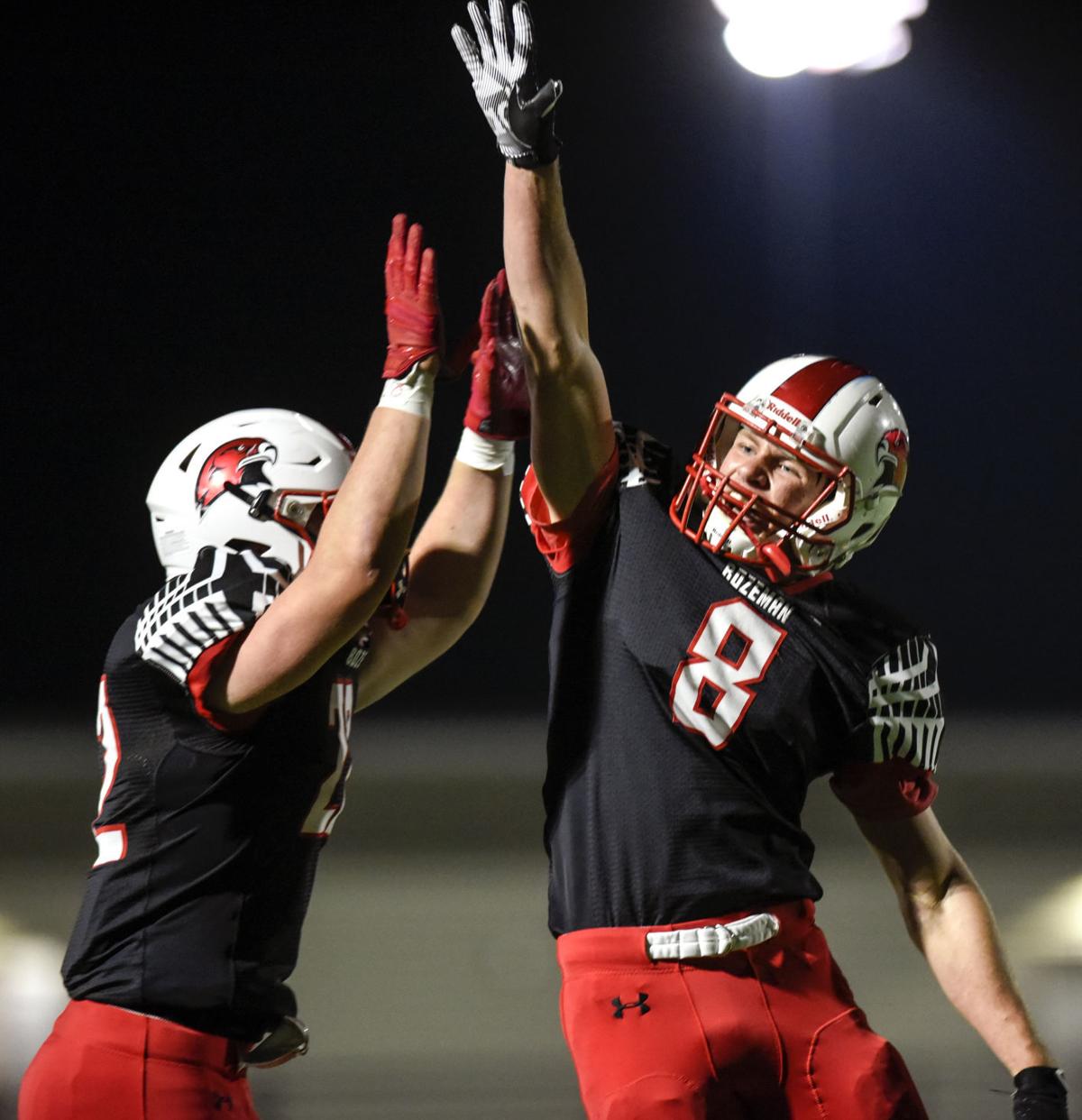 Gallatin running back Corbin Holzer looks for an opening Sept. 19 at Belgrade.

Gallatin's Rylan Schlepp sheds a tackle before scoring his second touchdown of the day against Great Falls on Sept. 11 at Van Winkle Stadium.

Tucker and Cooper Macbeth grew up playing tackle football in their backyard. The sport remained integral to them throughout their lives. Tucker, two years older, would often bring Cooper everywhere with him including to summer workouts.

The two brothers will play against each other for the first time in an actual game. The Bozeman Hawks (3-1) will face the Gallatin Raptors (1-4) at 7 p.m. Thursday at Van Winkle Stadium in their first crosstown contest since Gallatin opened.

Tucker, a senior for the Hawks, said he loves Cooper, a Raptors sophomore. But he’s also not afraid to tackle his brother if the opportunity arises, just like in their backyard years ago.

“He’s always been talking,” Tucker said, “so I’ve got to put him in his place.”

“It’s just a big accomplishment that we’re both here right now,” he added. “I’m super proud of him, and I love him. It’s going to be weird playing him.”

The Hawks and Raptors know each other well. Gallatin head coach Hunter Chandler was Bozeman’s defensive coordinator until this year. Now he’s tasked with game planning against the returning state champion Hawks.

Chandler hopes a game like this draws more intrigue to football.

“I know they do a really good job, and they have a super talented team,” Chandler said. “They bring a lot of guys back from last year. I’ve coached a lot of those guys. … I’m definitely familiar with the personnel. It’s just going to be a fun opportunity to go and compete.”

Bozeman head coach Levi Wesche called the game “bittersweet.” He’s coached some of Gallatin’s players and considers those who will be on the opposite sideline as friends. So now competing against them, he said, will be “difficult.”

Both Chandler and Wesche complimented each other’s performance leading their respective programs.

“I think (Chandler has) done a great job. I think they’ve done a lot of good things,” Wesche said. “They’re obviously building a program that’s going to compete for championships and conference titles sooner rather than later.”

That familiarity might not be an advantage for either team. Both teams already know each other’s standout athletes and primary schemes.

Chandler said no specific area stands out to him when he watches the Hawks on film because of their well-rounded depth they return from their title team a year ago.

Chandler pointed to Montana State commit Kenneth Eiden IV as the “best player in the state since he was a sophomore.” Chandler now has to prepare for him. For years, he heard from opposing coaches about how they had schemed up a special plan to slow him down.

“That never really ended up working out. He’s a really good player,” Chandler said. “One of the best I’ve ever seen.”

While the Raptors don’t have the experience the Hawks do because Gallatin doesn’t have any seniors, Wesche emphasized the Raptors shouldn’t be treated like a JV team. They’ve already played a handful of varsity games and have a win, Wesche added, so they’ll only keep improving.

Gallatin’s Noah Dahlke believes the Raptors can match up well with the Hawks.

“We’ve got to come out and put some points on the board,” Dahlke said. “We can’t let them run over us. I think if we (score early), we should have a pretty good game as long as we stay in it and stay focused.”

That’s why Wesche said the Raptors will be “a real challenge.”

“They don’t have a great record and haven’t won a ton of games, but that makes them more dangerous,” Tucker Macbeth added. “They want that win that much more, so we’ve just got to come out, and this late in the season, we’ve got to play our football and play to our capability.”

Both the Hawks and Raptors are coming off of disappointing weeks.

Bozeman’s game against Belgrade was canceled because Panther athletes had tested positive for COVID-19. This gave the Hawks more opportunity to prepare for the Raptors, but Wesche said it was still “extremely disheartening” to have opportunities to play taken away.

But Wesche said that could be a reminder about the importance of following health guidelines.

“We were all super upset we couldn’t play,” Tucker Macbeth said. “But I think we’re all that much more hungry to keep playing and just savor every moment to play as brothers on that field.”

The Raptors, meanwhile, fell to CMR after leading at halftime. But Dahlke remains optimistic. He said his team has now adapted to the physicality of varsity football and is learning to be more aggressive.

The Raptors, Dahlke said, are hopeful they can play up to their potential for a complete game.

Dahlke doesn’t think limited fan attendance will take away from the atmosphere of the game. Both the Raptors and Hawks are eager to experience the ensuing enthusiasm that comes with the first contest between the two teams.

“It’s pretty cool,” Wesche said, “to bring some energy and positivity to our town and showcase what these two programs are doing and have some good, friendly competition and rivalry out there. It’s just been such a crazy time with COVID and everything else that when you do have a cool moment like this, I think it makes it even more important to enjoy it.”