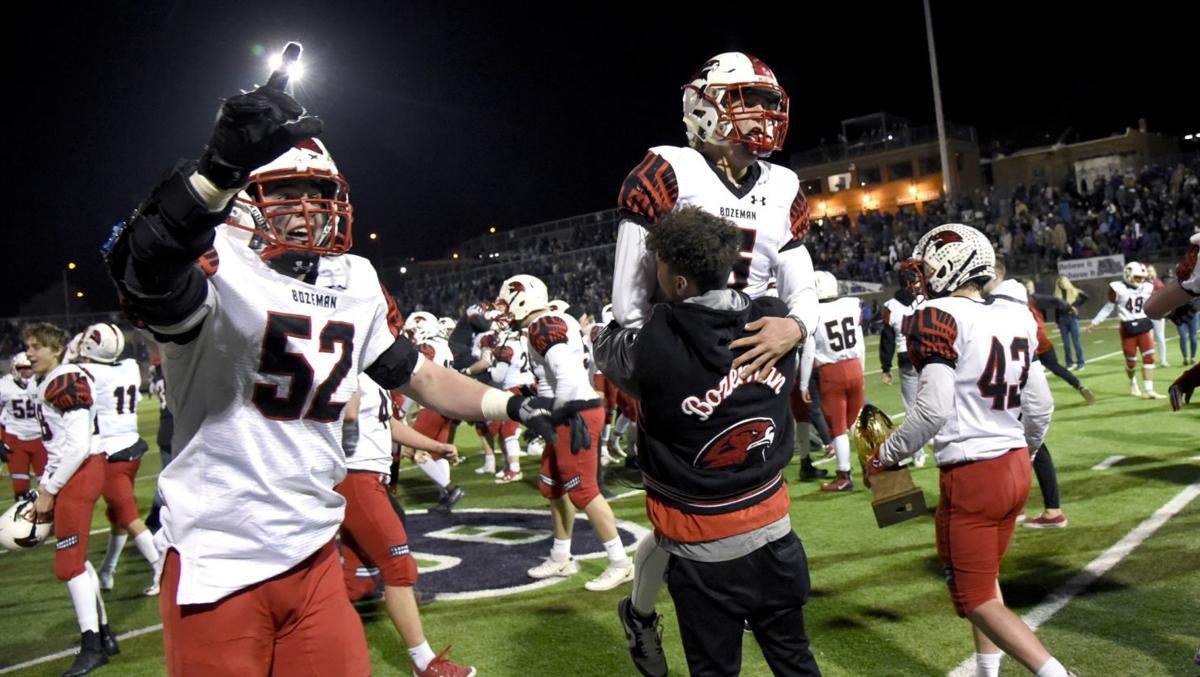 The Hawks celebrate their win over Butte in the Class AA championship game on Friday at Butte's Naranche Stadium. 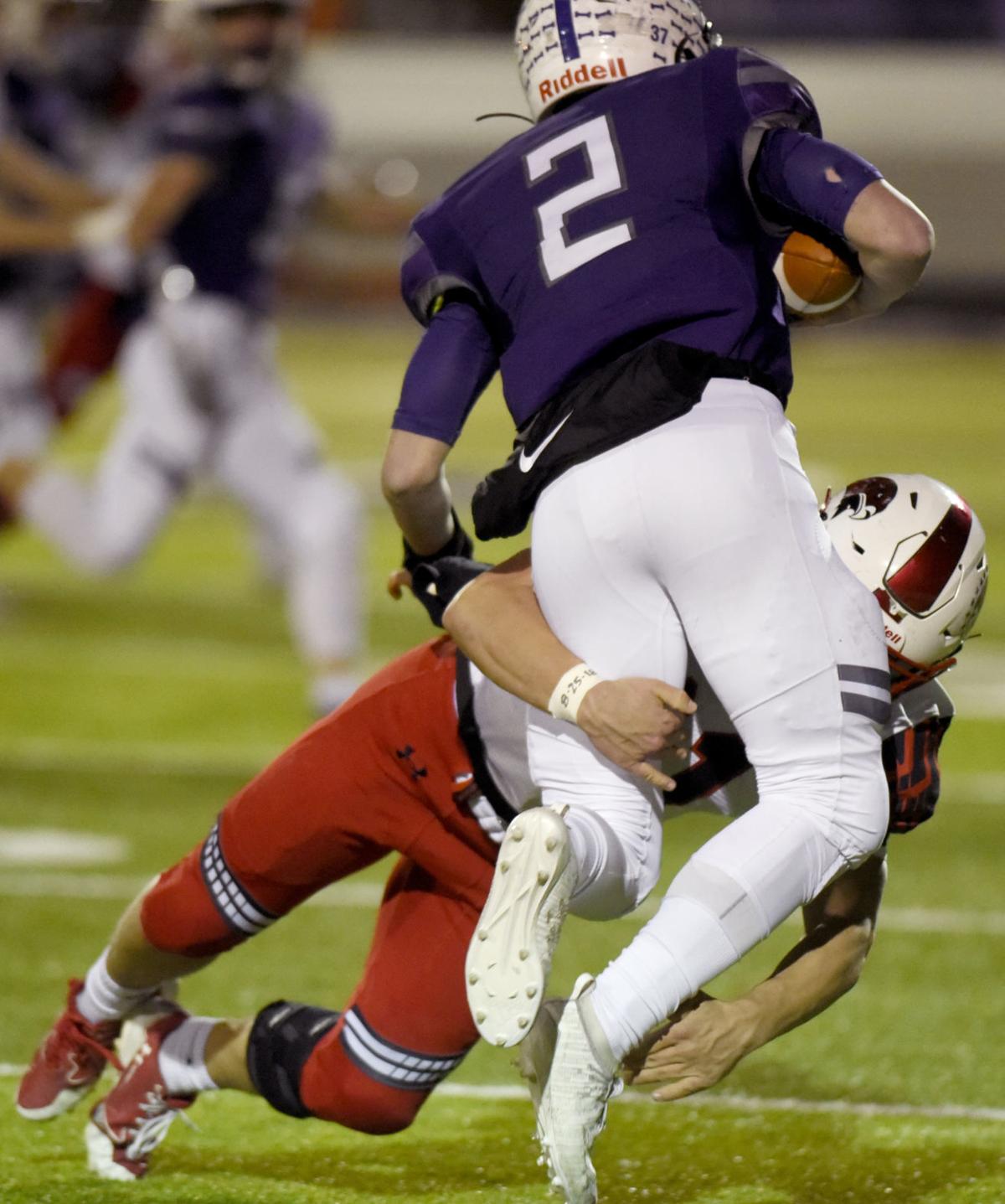 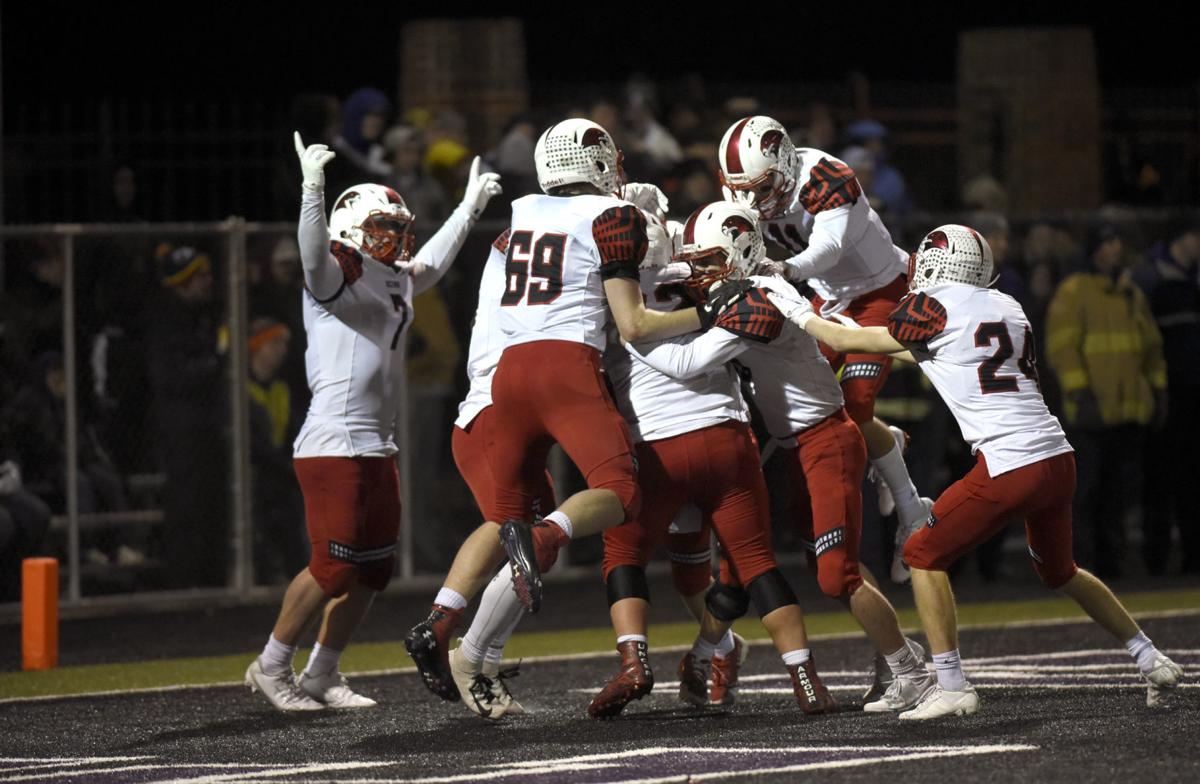 The Hawks celebrate during their win over Butte in the Class AA championship game on Friday at Butte's Naranche Stadium. 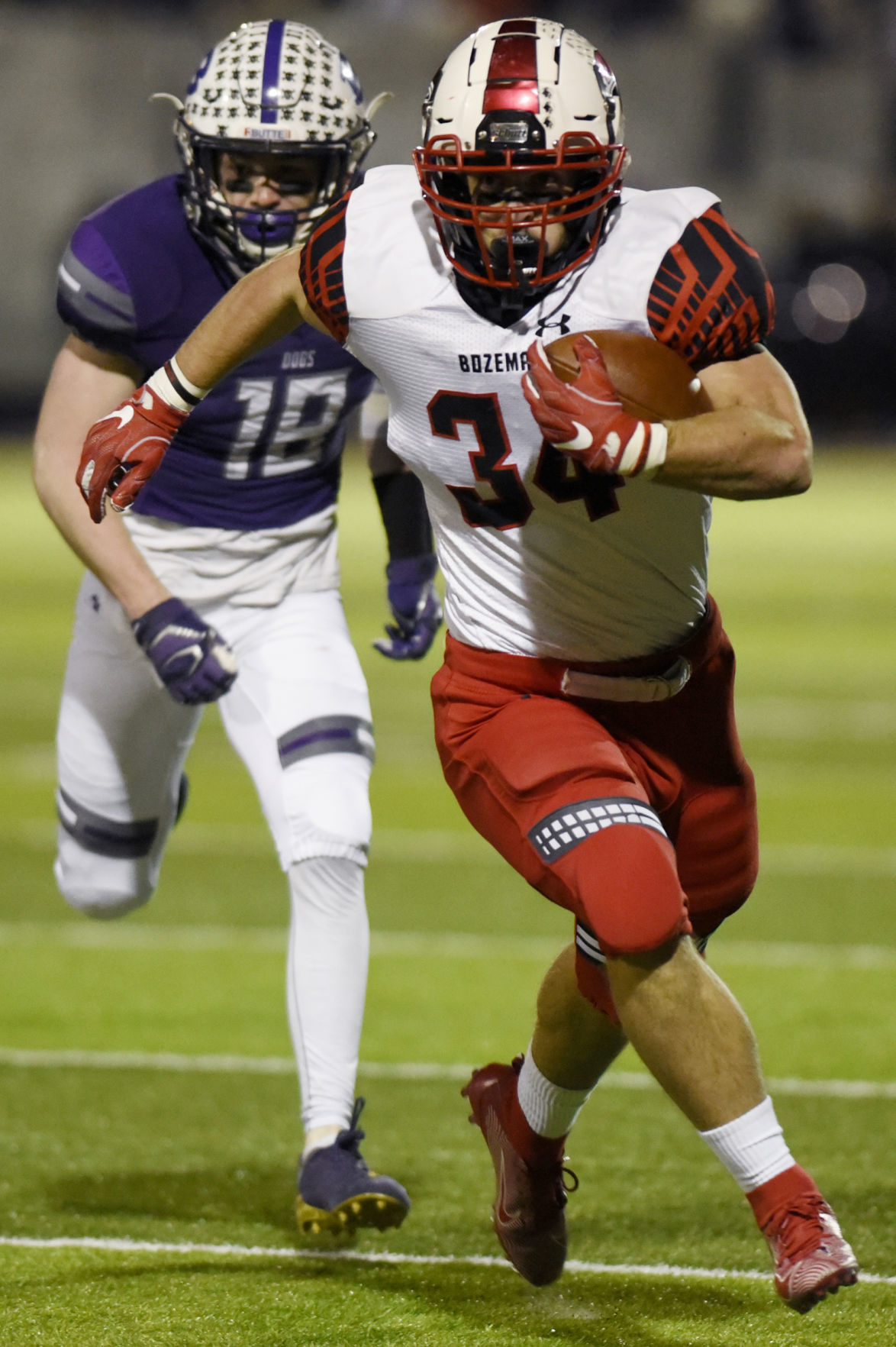 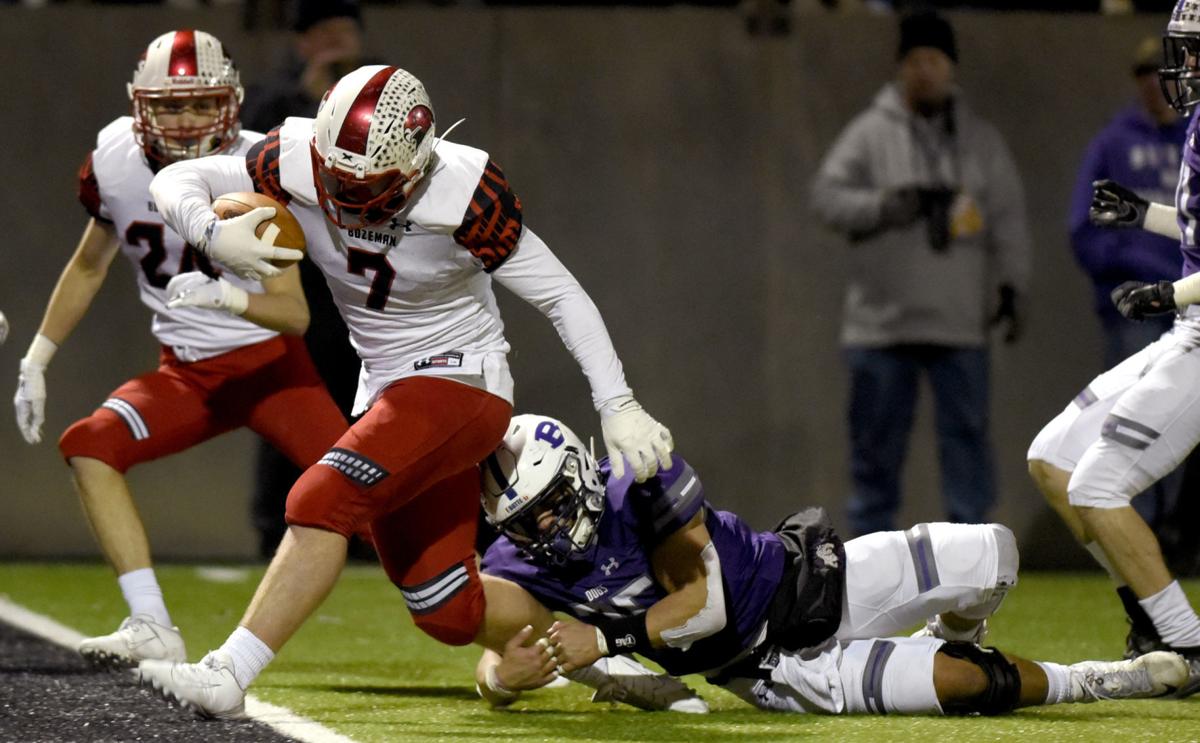 The Hawks celebrate their win over Butte in the Class AA championship game on Friday at Butte's Naranche Stadium.

The Hawks celebrate during their win over Butte in the Class AA championship game on Friday at Butte's Naranche Stadium.

Not when Butte scored first. Not when the Bulldogs tied the game in the second quarter. And definitely not when the hosts made a futile comeback attempt in the fourth.

His teammates didn’t stop either. Bozeman’s offensive line kept making space. Asher Croy kept pounding the ball up the middle. Everyone else made plays when they had to.

To win their fourth Class AA title of the decade and fourth in school history, the Hawks used the same formula they had all season.

“All year we knew we were going to win this thing,” Eiden said. “We came out and we did it.

Bozeman beat Butte 49-28 on Friday at Naranche Stadium and turned a tied game at halftime into a comfortable win. Three straight scores to open the second half made the difference in the 21-point game. In front of an estimated 8,000 fans, the Hawks (11-1) wore down the Bulldogs (11-1) and celebrated when the clock ran out.

The festivities began much earlier as the stands filled hours before kickoff. Fireworks boomed during the national anthem. Fans of both teams shook noisemakers all night long. But in the closing seconds, only Bozeman’s cheered.

Croy rushed for three touchdowns while Eiden caught two scores. The Hawks limited Butte’s offense, which never previously scored less than 35 points. Bozeman needed to go on the road in the semifinals and again in the championship and won both times.

“I'm just glad everyone doubted us,” Eiden said, “because we kicked some ass tonight.”

On T-shirts, in hashtags on social media and all throughout Bozeman’s program, the Hawks preach being uncommon. It starts with weight-lifting sessions at sunrise in the summer and ends with practicing in the snow in November. All the time invested the other eight months of the year, too, was done with Friday’s accomplishment in mind.

A season ago, Bozeman never had the opportunity to play for a championship. The Hawks never lost all regular season. They averaged more than 44 points per game. They graduated five seniors who went on to Division I programs. But the journey was cut a week short when they were stunned in the state semifinals.

This year followed a different course. Bozeman lost the same number of games, but this time the slip up came in Week 2. The Hawks learned from that. They needed to improve how they practiced. From that point on, linebacker Kaelan Patten believed no other team in the state brought as much energy to practice and no team enjoyed it as much as his.

Instead of boasting a dominant offense, Bozeman relied on a suffocating defense. The Hawks allowed less than 10 points per game entering Friday’s showdown. They held more than half of their opponents to seven points or less. But in order to achieve their ultimate goal, they had to slow Butte, which averaged 46 points in its first 11 games, enough to take down the Bulldogs.

“I think they embody the mantra of being uncommon,” head coach Levi Wesche said.

Bozeman now enters a new era of high school football in its town. Next fall, Gallatin High will open. There will be more opportunities for players and less crowded hallways, two teams sharing one home field and one community split between two teams. Friday nights will never quite be the same.

But this Friday night was about the Hawks, the team that rallied one community behind one singular group and one singular goal. From last year’s heartbreak to this year’s happiness, Bozeman set out to do what it hadn’t since 2015.

After just about every win this season, Wesche emphasized that his group was far from a finished product. He wanted players to perpetually seek improvement regardless of the outcomes. If they did that, Wesche believed they could climb to the season’s peak that every other team only wished they could.

“We had ups and downs, no doubt,” Wesche said, “but when we had to win or when the game got on the line, someone made a play every single time. That's toughness. That's grit. We have that.”

At halftime, with the score knotted at 14, Bozeman discussed how only 24 minutes remained. For most seniors, this was the last game they’d ever play. The Hawks didn’t change much. They knew if they stopped giving up big plays and stopped missing opportunities, they would win.

The two teams traded punts to open the third and tension built. Everyone in attendance could see their own breath. Fans craned their necks around others to catch the action.

Late in the third, quarterback Jake D’Agostino aired the ball out to Carter Ash for a 24-yard touchdown. On the first play of the fourth, D’Agostino hit Eiden on a swing pass, and he ran in from 26 yards out. A minute after that, Camren Spencer intercepted a Tommy Mellott pass and returned it 25 yards for a pick-six.

Bozeman’s avalanche finally fell. And from then, Bozeman kept handing off to Croy. The senior running back transferred from Huntley Project before the season. He never imagined it ending with a state championship.

But down the stretch, Butte and Bozeman each scored two more touchdowns. Bozeman's came from Croy. The Hawks ran the ball up the middle over and over. That was the game.

“Once we started rolling,” Croy said, “I knew we'd be able to pound the ball all night long.”

When Butte’s final pass fell incomplete, Bozeman’s players rushed from the sideline. Fans, who were told to remain in the stands, eventually flooded the field. Players hugged coaches, peers and each other.

Then they danced and posed for photos and made sure to take it all in.

“I love my family, I love this team,” Eiden said, “and I love the town of Bozeman.”