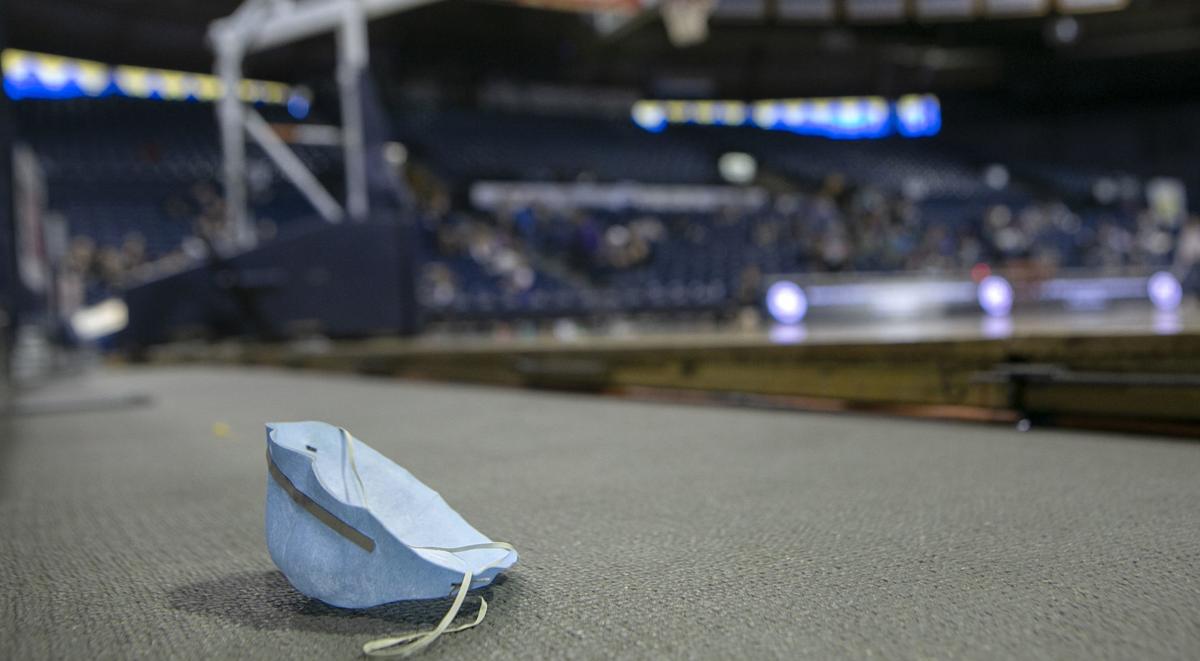 A face mask lies on the ground near the court during a Class AA basketball quarterfinal matchup on Thursday at Worthington Arena. 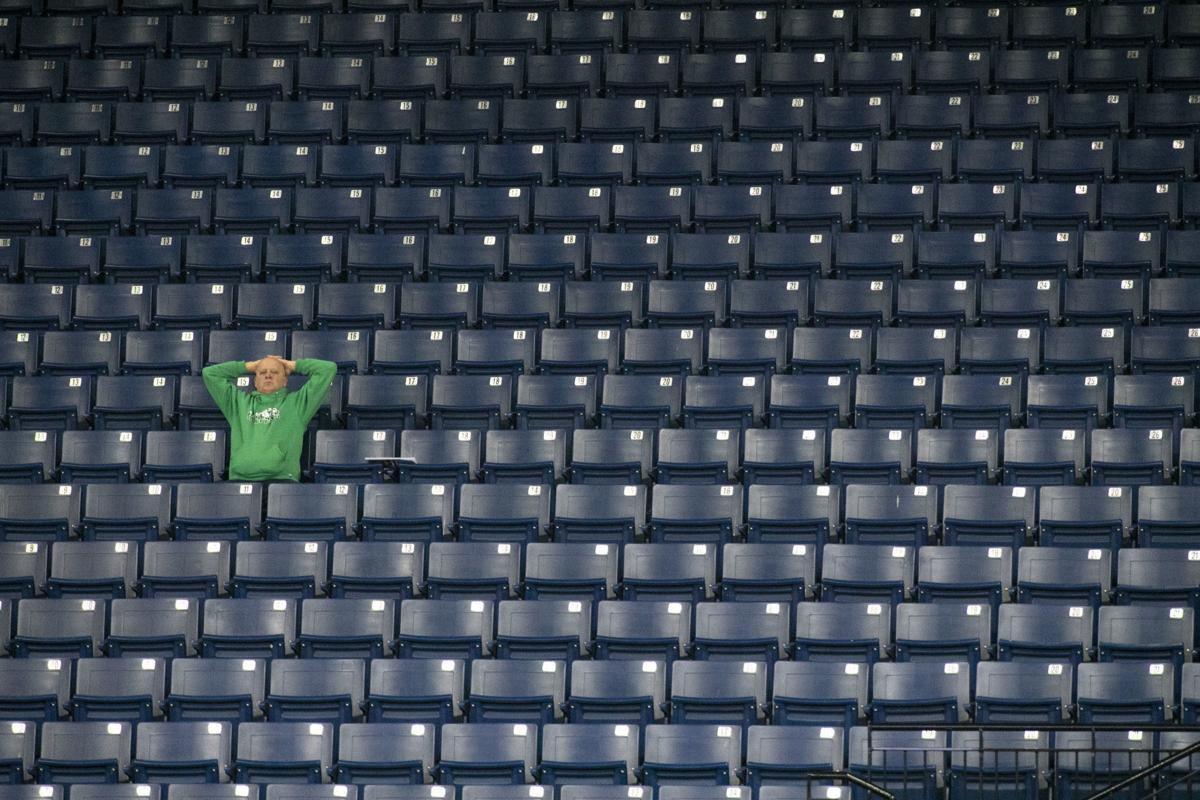 A single person sits in the stands during the Class AA tournament Thursday at Worthington Arena. 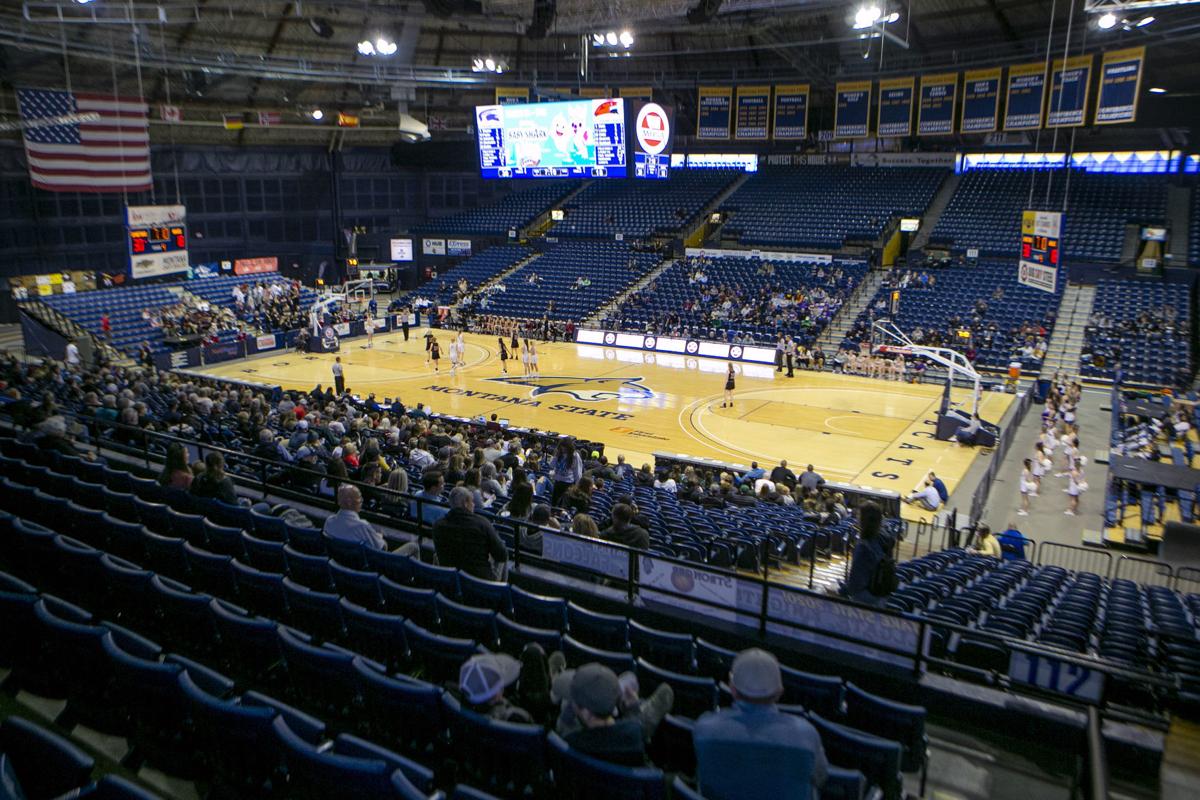 A crowd is seated in the Worthington Arena stands during a Class AA quarterfinal Thursday.

A face mask lies on the ground near the court during a Class AA basketball quarterfinal matchup on Thursday at Worthington Arena.

A single person sits in the stands during the Class AA tournament Thursday at Worthington Arena.

A crowd is seated in the Worthington Arena stands during a Class AA quarterfinal Thursday.

Even after national events like NCAA Tournament games were called off and Montana Gov. Steve Bullock signed an executive order declaring a state of emergency on Thursday, the Montana High School Association basketball tournaments were intended to roll on.

However, the MHSA canceled the remainder of the four state tournaments, executive director Mark Beckman announced late Friday night, following news that four cases of coronavirus were confirmed in Montana.

“As such,” an MHSA announcement read, “the Montana High School Association has no choice but to cancel the remainder of our state basketball tournaments.”

Though the MHSA said it wasn’t the desired result, the winners of the state semifinals would be co-champions.

According to the USA Today, Montana was the only remaining state holding high school sporting events without attendance restrictions. Two other neighboring states, Wyoming and North Dakota, had also canceled their high school basketball state tournaments earlier in the week.

The Big Sky Conference basketball tournaments in Boise, Idaho, had been canceled earlier in the week, and the conference announced spring sports had been suspended until further notice amid the coronavirus pandemic.

At 6:18 p.m. Friday, the MHSA released a statement saying association board members had learned from the Montana Department of Public Health & Human Services at 4:30 p.m. no confirmed cases of coronavirus were in the state.

The MHSA repeatedly used this reasoning for the state tournaments to continue, including in that release.

“Please keep in mind,” the release said, “Montana is at the lowest risk level, with no confirmed cases of (coronavirus) and no evidence of community spread. However, it is anticipated the state will cross these thresholds in the near future. Rest assured, the MHSA and the State Health Department will be in close contact monitoring any changes in (coronavirus) status in the state.”

Around 7 p.m., less than an hour after the release was sent, Bullock announced four presumptively confirmed cases in the state. One of those was in Gallatin County.

Attempts to reach Beckman for further comment after Bullock’s announcement Friday were unsuccessful.

“Things have been kind of crazy right now, even in the last day,” Bozeman girls basketball head coach Erika Gustavsen said after her game Friday afternoon. “I feel like it became so much more realistic here.”

MHSA provided teams mitigation strategies before tournaments began. It recommended to coaches and players to use fist or elbow bumps instead of handshakes or hugs and encouraged anyone that exhibited a fever or coughing symptoms to stay at home and watch games online.

Whether state tournaments ended early or not, Holmquist believed Bozeman had enjoyed a successful season.

However, with Holmquist leaving to coach Bozeman Gallatin’s girls program next season, he’s coached the Hawks during a game for the last time of his tenure.

“Obviously most people who will judge everything by wins and losses. I’ve been doing this a long time. There’s way more to it than that,” Holmquist said. “It’s just a great group of kids. What I’ve seen from them is progress and improvement throughout the year. I’ve seen teamwork that impresses me. I’ve seen them be unselfish.

“That’s what it’s all about for me. It’s never about the destination, it’s about the journey. ... If you focus on the journey and the lessons throughout we’ll learn, it’s a special thing and a bond you can’t take away.”