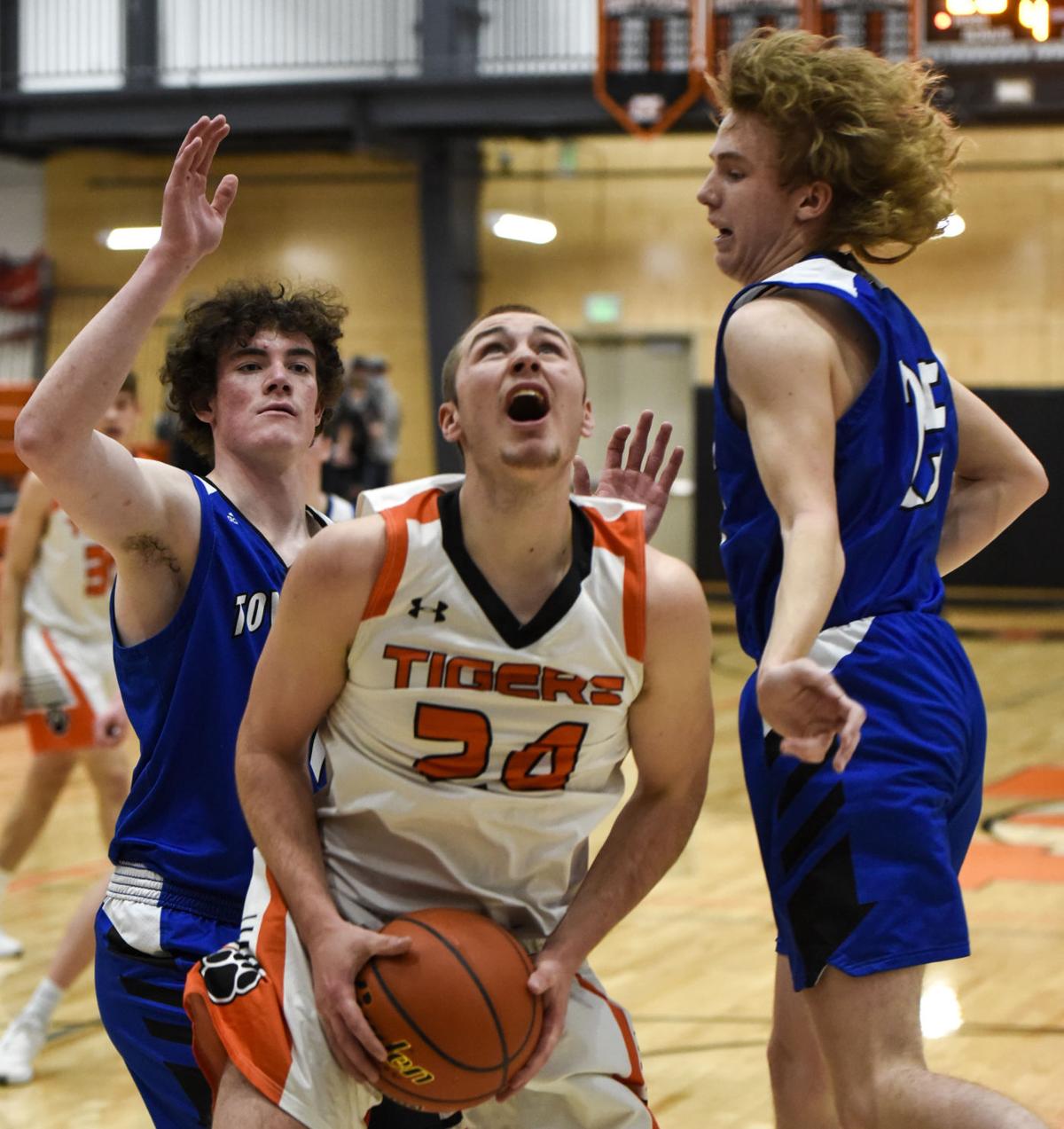 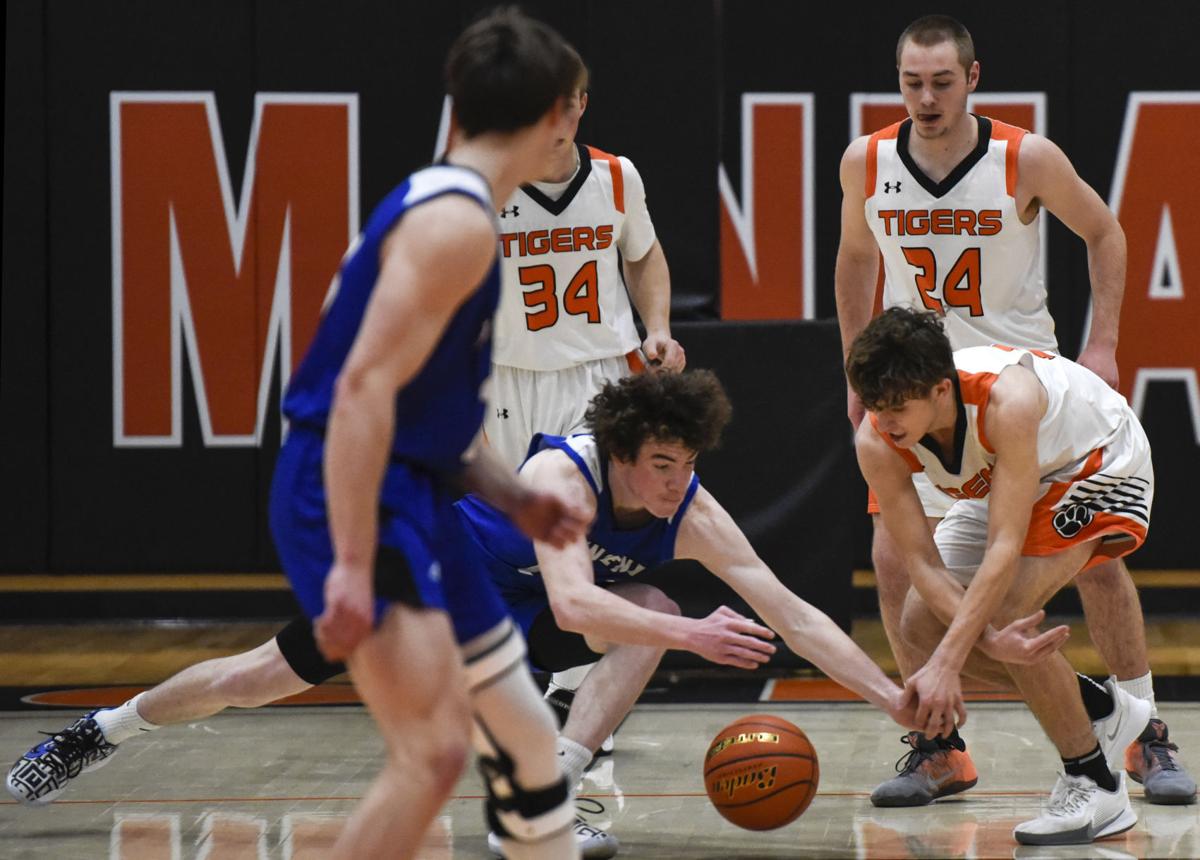 Manhattan and Broadwater County players scramble for the ball Saturday at Manhattan High. 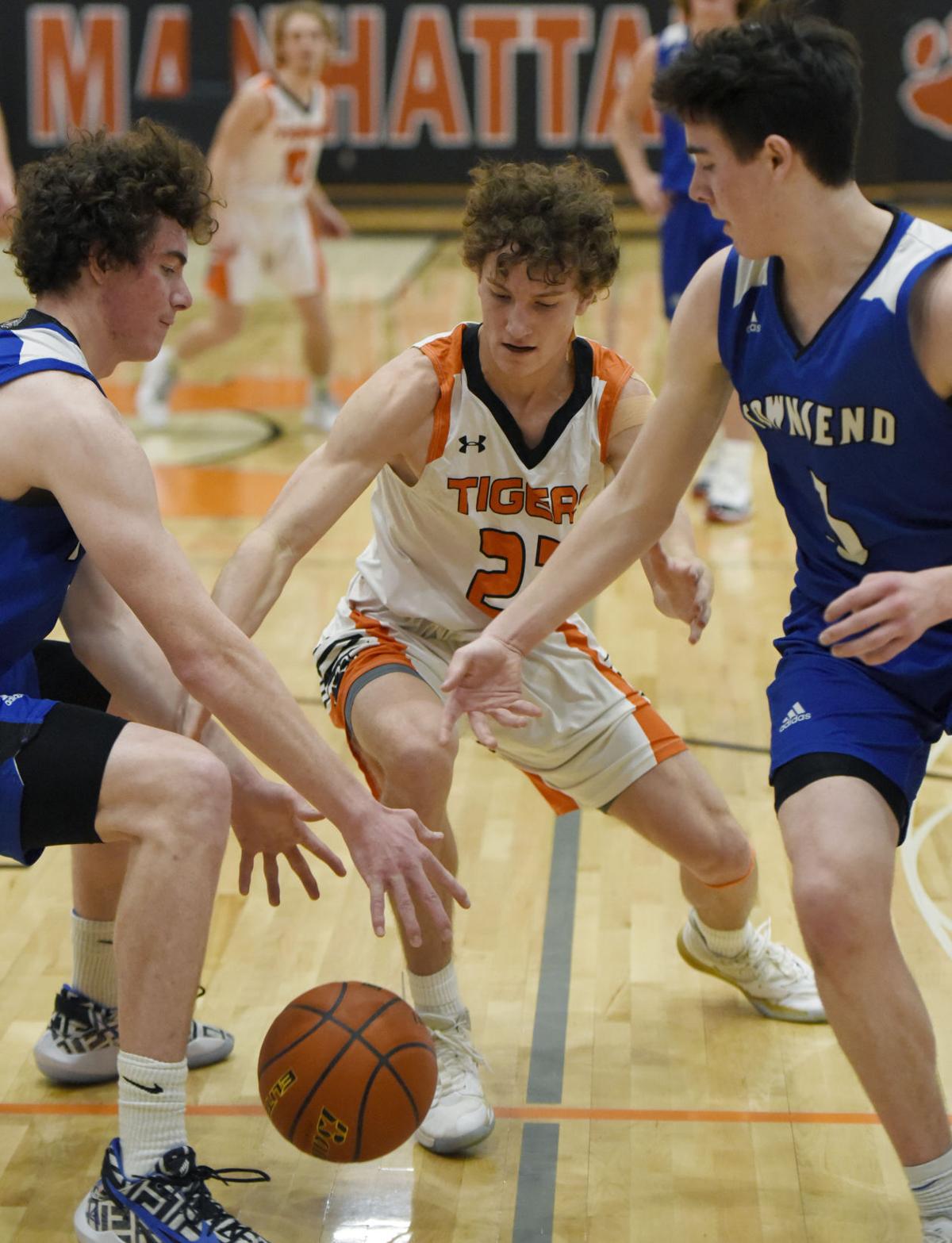 Manhattan senior Tate Bowler scrambles for the ball against Broadwater County on Saturday at Manhattan High.

Manhattan and Broadwater County players scramble for the ball Saturday at Manhattan High.

Manhattan senior Tate Bowler scrambles for the ball against Broadwater County on Saturday at Manhattan High.

MANHATTAN — As Manhattan players took the district championship trophy and raised it up, fans cheered from the stands. The Tigers needed to fight through a close game and were relieved to earn a win.

Top-seeded Manhattan came back after trailing at halftime to win 65-59 on Saturday over No. 2-seeded Broadwater County in the District 5B championship on Saturday at Manhattan High.

“I love winning,” Manhattan’s Caden Holgate said. “... I would say the main reason we won that game was because of defense. We stepped it up in the second half, and that was huge for us.”

In their first two meetings of the season, Manhattan won. After a slow start, the Tigers won by five points against Broadwater in the beginning of January.

Then later in the month, Holgate scored 19 points as the Tigers won in their second matchup by 14.

But the Bulldogs made sure the Tigers didn’t get away with an easy victory this time.

“I’m extremely proud of the team,” Manhattan’s Corban Johnson said. “We’ve come a long way since the beginning of the season. … We put in enough work to come out on top.”

After a 24-point win over Three Forks in the district semifinals, the Tigers (14-2) prioritized ball movement. They felt this would lead them to victory.

This was evident from the opening possession. Manhattan passed the ball around until finding Sven Stenberg as he cut to the basket, leading to an open layup.

On the next possession, the Tigers again passed the ball around until Holgate, who finished with a game-high 20 points, made a 3-pointer.

The Tigers led 8-2 less than two minutes in after Finn Tesoro grabbed a rebound, Manhattan quickly turned around in transition and Holgate made another 3.

But the Bulldogs began to show why they were the second-seeded team in the district. Braden Racht, who ended up with 10 points, hit a fadeaway jumper right before the first quarter expired. He pumped his fist and yelled as he started walking back to his bench.

After the Tigers opened with a 10-3 lead, the Bulldogs responded with a 15-8 run to tie it up going into the second quarter.

And at the end of the first half, Broadwater’s Trey Hoveland, who finished with 13 points, secured a steal with about seven seconds to go until halftime. This led to Devon Zeadow’s layup right before the buzzer, and the Bulldogs led 30-26 at the break.

“We came out in the third quarter and took back the lead,” Tigers head coach Wes Kragt said. “It was good for us to come back from behind and build our confidence heading into the divisional tournament.”

After winning on Thursday, Manhattan also emphasized defense. From the beginning, the Tigers tried to not give the Bulldogs any room to pass or drive. Kragt said Manhattan’s offense would develop if his team played well defensively.

To open the second half, Stenberg stole the ball from Broadwater, bolted down court, stopped to cause a trailing defender to run by him and made the fast-break layup.

On the very next possession, another Stenberg steal led to Tesoro making a layup despite a foul to tie the game up at 30.

As Tesoro made his way back to the free-throw line, Stenberg pumped his fist to celebrate the momentum-changing play.

From there, Manhattan seemingly was in control.

“I think it took defense at the end,” Johnson said. “We were struggling on offense all night, but in the end, defense and getting a couple loose balls won us the game there in the end.”

After Broadwater stole the ball from Manhattan, Johnson picked off a pass to take it right back while surrounded by Bulldogs players. He then sprinted down court and made a layup after a foul.

The Tigers were up by four with 2:13 left in the third quarter.

To end the third, Tate Bowler, who ended up with 12 points, threw a pass to the other side of the court to find Holgate for another open 3.

With several exhilarating plays, the Tigers stayed in control for the rest of the game. Broadwater closed the gap to five points with less than 20 seconds left, but Manhattan did just enough to win.

“I’m really proud of us,” Holgate said. “I’m proud of the way we handled things.”

Also in the District 5B tournament, the Three Forks boys defeated Sweet Grass County 50-47 in the third-place game. The Wolves will also advance to the Southern B Divisional tournament.

Manhattan lost to Jefferson 43-35 in the District 5B girls tournament's third-place game. Olleca Severson led the Tigers with 14 points in that contest while Cia Stuber paced Jefferson with 12 points.