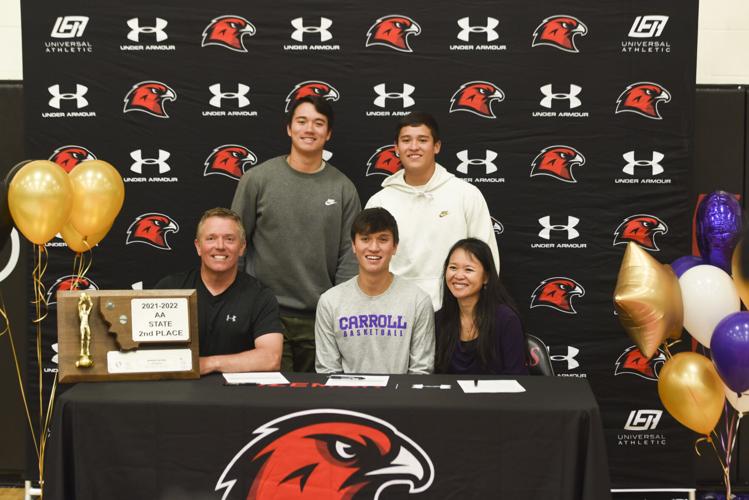 Bozeman senior Trent Rogers is photographed with his family after signing to play basketball with Carroll College on Wednesday at Bozeman High. 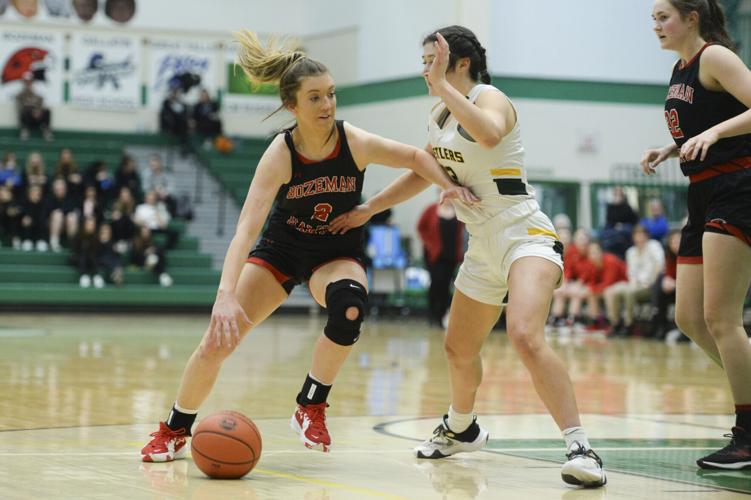 Bozeman senior Emily Williams dribbles around Great Falls CMR’s Lauren Lindseth during the first round of the Eastern AA Divisional on March 3 in Belgrade.

Bozeman senior Trent Rogers is photographed with his family after signing to play basketball with Carroll College on Wednesday at Bozeman High.

Bozeman senior Emily Williams dribbles around Great Falls CMR’s Lauren Lindseth during the first round of the Eastern AA Divisional on March 3 in Belgrade.

Based on her family history, it’s easy to see why Bozeman senior Emily Williams wanted to play basketball.

“My family played college basketball and it inspired me always since I was little to get to the collegiate level to play basketball,” Williams said.

Williams is finally reaching that goal after committing to play for Green River College on April 14. While this means Williams will be leaving Montana, she still has some extended family near the campus in Auburn, Washington.

“It’s going to be a new experience for sure, which I’m excited for,” Williams said. “Especially in a bigger city, it’s going to be a lot different. There’s a lot of appeal with just trying something new.”

Williams said she first started making a serious push for this entering her sophomore year at Bozeman. The first step was securing a spot on varsity.

“It ended up working out well for me and I think ever since I was able to kind of prove myself and I’ve kept working towards that,” Williams said.

Williams’ coaches took notice as she continued improving throughout her sophomore and junior seasons.

“She was one of the more consistent kids coming into (her senior) season,” Bozeman head coach Kati Mobley said.

“She was (also) one of our more experienced kids and we challenged her in a lot of different ways. And she really stepped up to it.”

Mobley added that she and Williams discussed the potential opportunities to play at the next level, but that Williams took charge once her senior season started.

After a couple visits up to Auburn, on the outskirts of Tacoma, to see Green River — which was the first school she contacted — Williams was sold. She added that she immediately connected with the coaching staff and loved how they continued checking in on her throughout the recruiting process.

“It felt very homely and I think that’s very important when you come to that kind of decision of ‘Where am I going to spend the next couple of years?’” Williams said. “Especially when it’s multiple hours away. I think just because of how homely it felt there, I think that’s kind of why I made that decision.”

Mobley said she was proud of Williams taking this step and that it’s exciting to see her players move on to play at the collegiate level.

“It’s always great for our program because they can come back and share their experiences and they’re playing for different coaches,” Mobley said.

Along with Mobley’s support, Williams said the reaction to her commitment has been “unbelievably awesome” from her friends and family.

“Everyone was just like, ‘Go for it if this is what makes you happy,’” Williams said. “That was the main point with my parents, especially with making the decision. They obviously don’t mind what I do, as long as I’m happy with my decision.”

Now that playing at college basketball will be a reality for her, Williams said she’s looking forward to finally taking that next step.

“It’s really exciting,” Williams said. “It’s also nerve-racking, but it means a lot to me to kind of prove myself and just show what I’ve worked so hard for over the last couple of years.”

Things really started to click for Trent Rogers from a basketball standpoint near the end of his sophomore year.

“That was when I started working out a bunch, doing more speed and basketball workouts,” Rogers said. “I think I just got stronger, more athletic and watched the game a lot. Just got better at it.”

Bozeman head coach Troy Hostetler, who started coaching Rogers when he was on the freshman team, said he was extremely proud of Rogers’ efforts and how he made himself into a varsity player by junior year. But there was still more work to do.

“There’s things I’d ask him to do that he wasn’t doing, that if you’re a lesser player you could take offense to,” Hostetler said. “You could think, ‘I don’t need to do that, coach. I’m pretty good at doing this.’ But he listened. He did what was best for us as a team. And he was rewarded for that.”

One of those things was becoming a better defensive player.

“He had the ability and he had all the tools to be a good defensive player and he just wasn’t doing it,” Hostetler said. “And he took that to heart this year.”

Hostetler added that Rogers’ improved defense is a key reason why the Bozeman senior was able to sign with Carroll College Wednesday. Rogers — a second-team All-Conference player last season — said one of his biggest reasons for picking Carroll was the near-immediate bond he formed with head coach Kurt Paulson, who was in attendance at the signing ceremony at Bozeman High.

“It means a lot to me (for Paulson to be in attendance), and I need to tell him that too,” Rogers said. “But I appreciate it a lot that he came down and used his time to see me sign for a little bit.”

Rogers said Carroll was actually one of the last schools he contacted during the recruiting process. He said Montana Rebels coach Shawn Dirden and Bozeman assistant coach Brad Huse helped him contact schools, and that Paulson connected with Rogers at the Hi-Line Invitational tournament in March.

Rogers added that during this process he’s received plenty of advice from Dirden, Huse and Hostetler. One thing Hostetler said college coaches look for is if a recruit makes other players better. He said Rogers fits in that category.

“It allows (other players) to play to their skill level because he does certain things,” Hostetler said. “When I look at kids and how great they’re going to be, if they can make other kids better when they’re on the floor, that’s a big one for me. That means you’re pretty dang good.”

Rogers said the reaction to his decision has been great so far — led by his mom, Trang, who was “ecstatic” when he told her the news.

“She was giddy the whole night,” Rogers said. “But they’re (all) super happy for me, supportive. Like my brother (Tate) and my dad (Tyd) will go out and shoot with me and rebound for me anytime that I ask them.”

Hostetler has previously said that one of his goals as a head coach is to put his players in position to take that next step to play college basketball. And with Rogers and Ty Huse — who signed to Montana Tech Wednesday — doing so next fall, Hostetler said it’s pretty exciting to witness.

“It means we have a pretty good program and we’re going to have a good year if we’ve got kids that are going to sign in college the following year,” Hostetler said. “I think it’s big for our program for younger kids to see that. That if you put the time in and this is a priority for you and you work hard, this is available to you.”

“(I’m excited about) just trying something new and also playing basketball at a new school,” Rogers said. “It’s like a whole new step in my life. It’ll be exciting.”