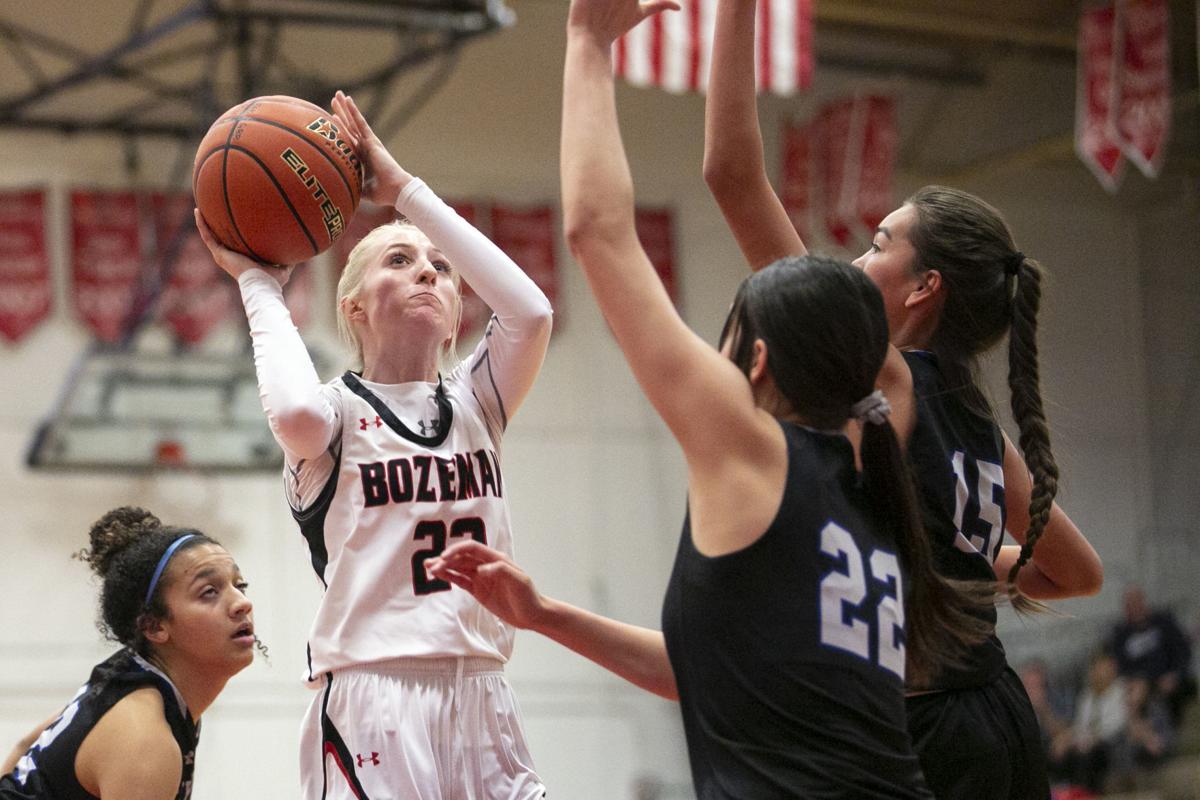 Bozeman junior Addi Ekstrom goes up for a shot against Billings Skyview on Saturday at Bozeman High. 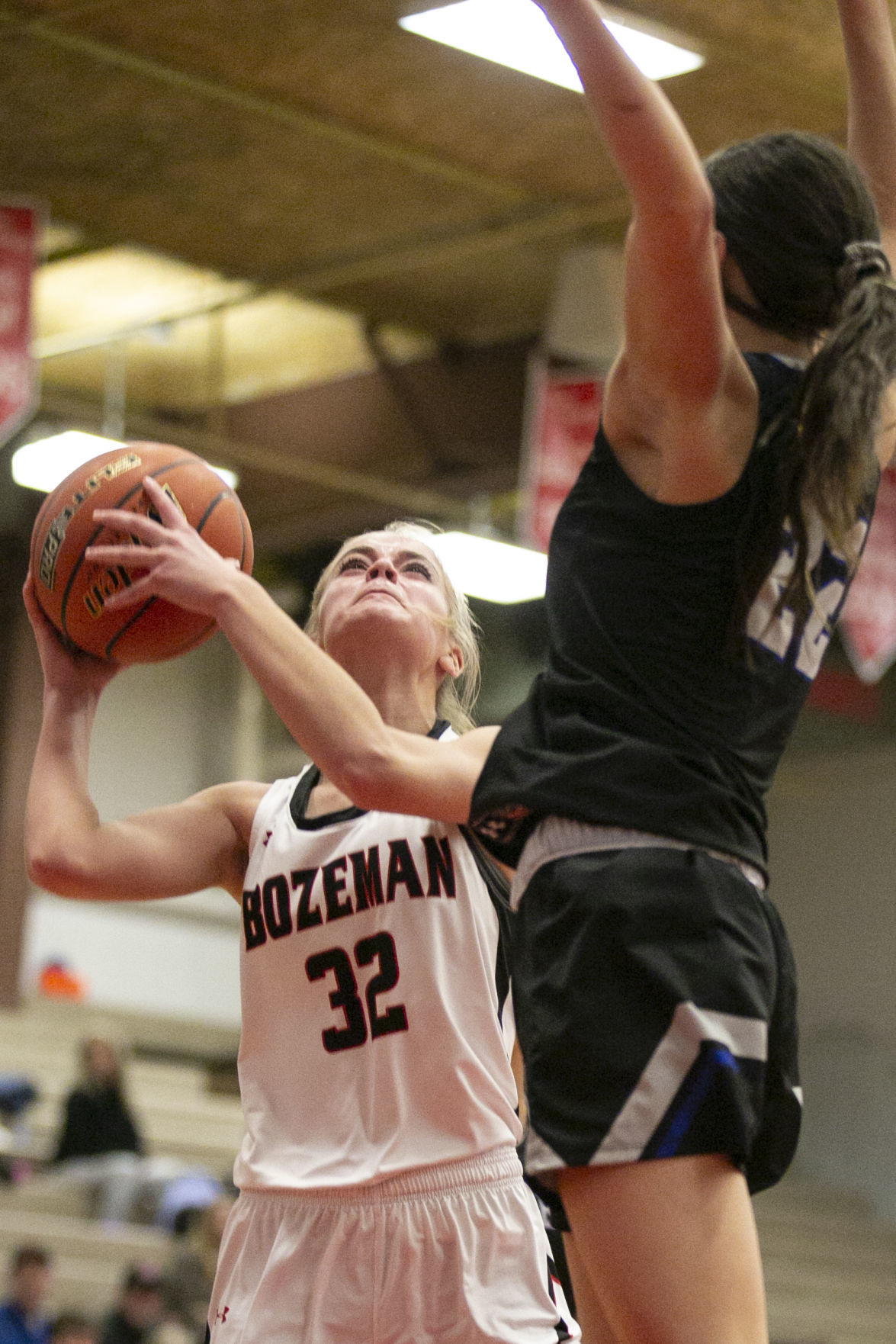 Bozeman junior Macy Mayer goes up for a shot against Billings Skyview on Saturday at Bozeman High. 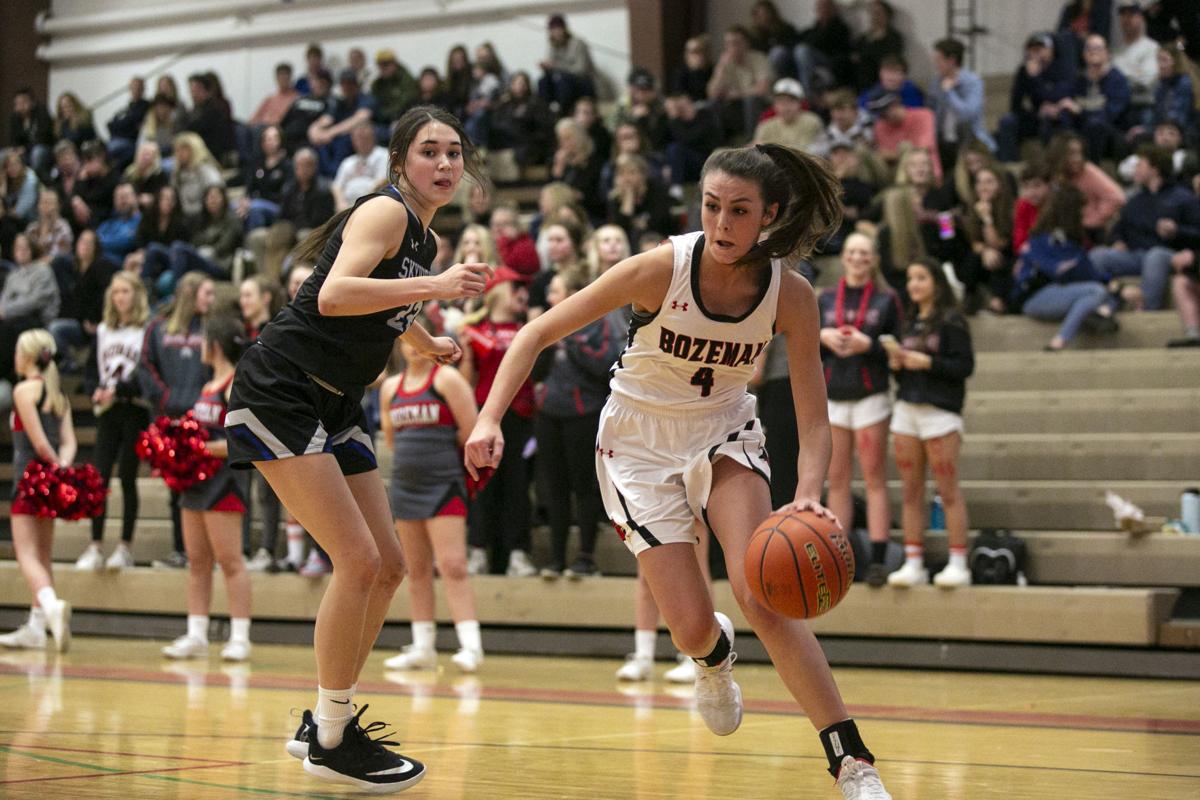 Bozeman junior Gabby Klein dribbles past a defender against Billings Skyview on Saturday at Bozeman High.

Bozeman needed a few moments to settle in.

After starting the season 0-4, the Hawks had worked diligently in practice during the holiday break. They were eager to begin Eastern AA play, the games that matter most during the regular season.

Bozeman was leading by just a possession early in the second quarter. The Hawks just needed to find a rhythm.

They began to secure crucial stops on defense by turnovers or rebounds. They scored on putbacks. They put a few runs together.

“It felt a little bit easier and things were clicking and our offense was working,” Bozeman’s Addi Ekstrom said. “We settled in and found our tempo and went with it.”

Bozeman allowed its stifling defense to lead to efficient offense, resulting in a 53-38 win in its Eastern AA opener against Billings Skyview at South Gym.

“It feels really great to get our first conference win,” Bozeman forward Macy Mayer said. “Our energy was really high tonight, and we played really good as a team.”

Hawks head coach Erika Gustavsen admitted the season didn’t begin how she had hoped. But those five days off during the winter break allowed her team to regroup and fix what wasn’t working.

The Hawks then secured their first win of the season on Jan. 2 against Missoula Big Sky at home. Now they’re on a two-game win streak.

The Hawks (2-4, 1-0 Eastern AA) returned just three players from last season. So Ekstrom, who was one of those players, said those practices during the break were “super beneficial” so they could better understand how everyone plays. Saturday, she said, was a display of their improvement.

Gustavsen recognizes how the Hawks build and play toward the end of the season is more important than how they began. Now, the Hawks are undefeated in conference play.

The Hawks were especially successful on defense. Other than Skyview’s Brooke Berry totaling 11 points, no other Falcon scored more than six. Gustavsen said that was especially key because the Hawks were preparing for Skyview’s standout scoring threats.

Mayer pointed out the Hawks had gone through defensive drills during the break, which led to effective communication and help defense. The Hawks ended up with eight steals and 26 rebounds as a team, often converting them into fast-break opportunities.

They also accomplished their goal of limiting Skyview to 40 points or less. This, Mayer said, is the level the Hawks always strive to play at.

“When we came back from Christmas break, it really was a fresh start for us,” Gustavsen said. “We came back, and I think we had just had a different feel. We just kind of settled in. There’s a lot of new faces, but there’s not a lot of time in a season.”

Bozeman’s defensive effort led to vital offense. Ekstrom made 6 of 12 shots and 2 of 5 3-pointers for a game-high 14 points to go with three assists. Mayer added 12 points on 6-for-10 shooting and a team-high five rebounds.

The Hawks finished 21 of 46 (46%) from the field and 5 of 12 (42%) from 3-point range as eight Bozeman players scored. Ekstrom noted the Hawks had been working on fast-break scenarios during their recent practices and applied that to the game.

“It’s really exciting to start our (conference) journey on a win,” she said. “I think we looked really good. We’ve been working really hard. Things are starting to click. Chemistry is building, and I think it looks really good.”

Gustavsen realizes how competitive the Eastern AA will be. She’s happy the Hawks have made the necessary improvements to begin conference play with a victory.

“Any conference win is a good win,” Gustavsen said. “It’s a good team effort. We kind of stayed in control I felt like, which I was really proud of.”