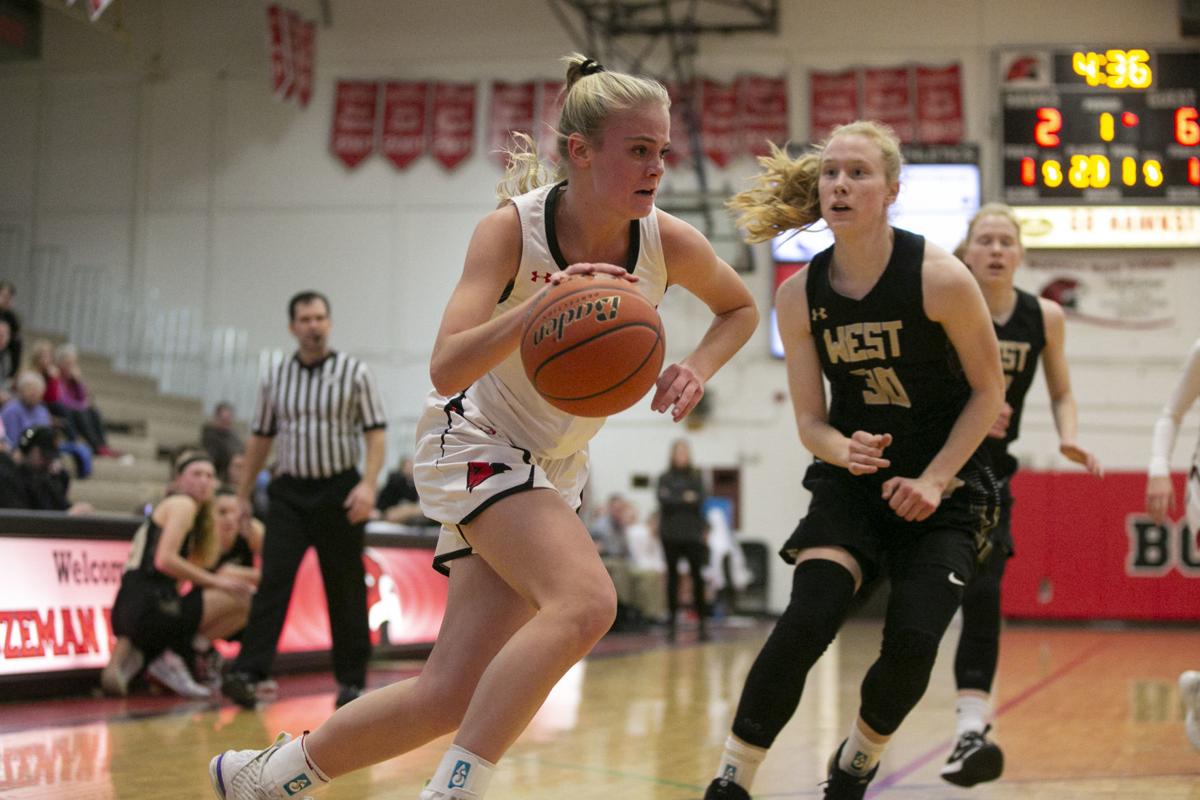 Bozeman junior Macy Mayer drives to the basket during a game against visiting Billings West on Tuesday. 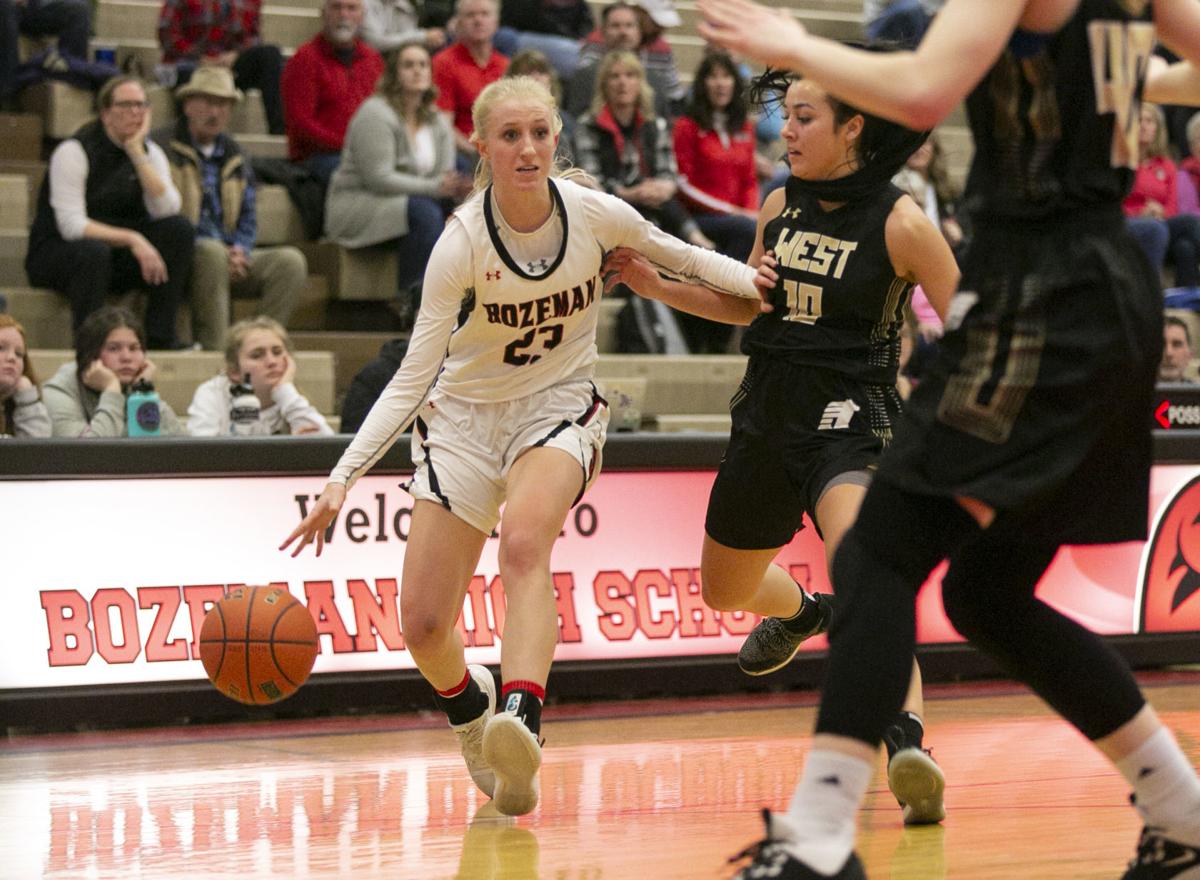 Bozeman High junior Addi Ekstrom looks to drive during a game against Billings West on Tuesday at Bozeman High. 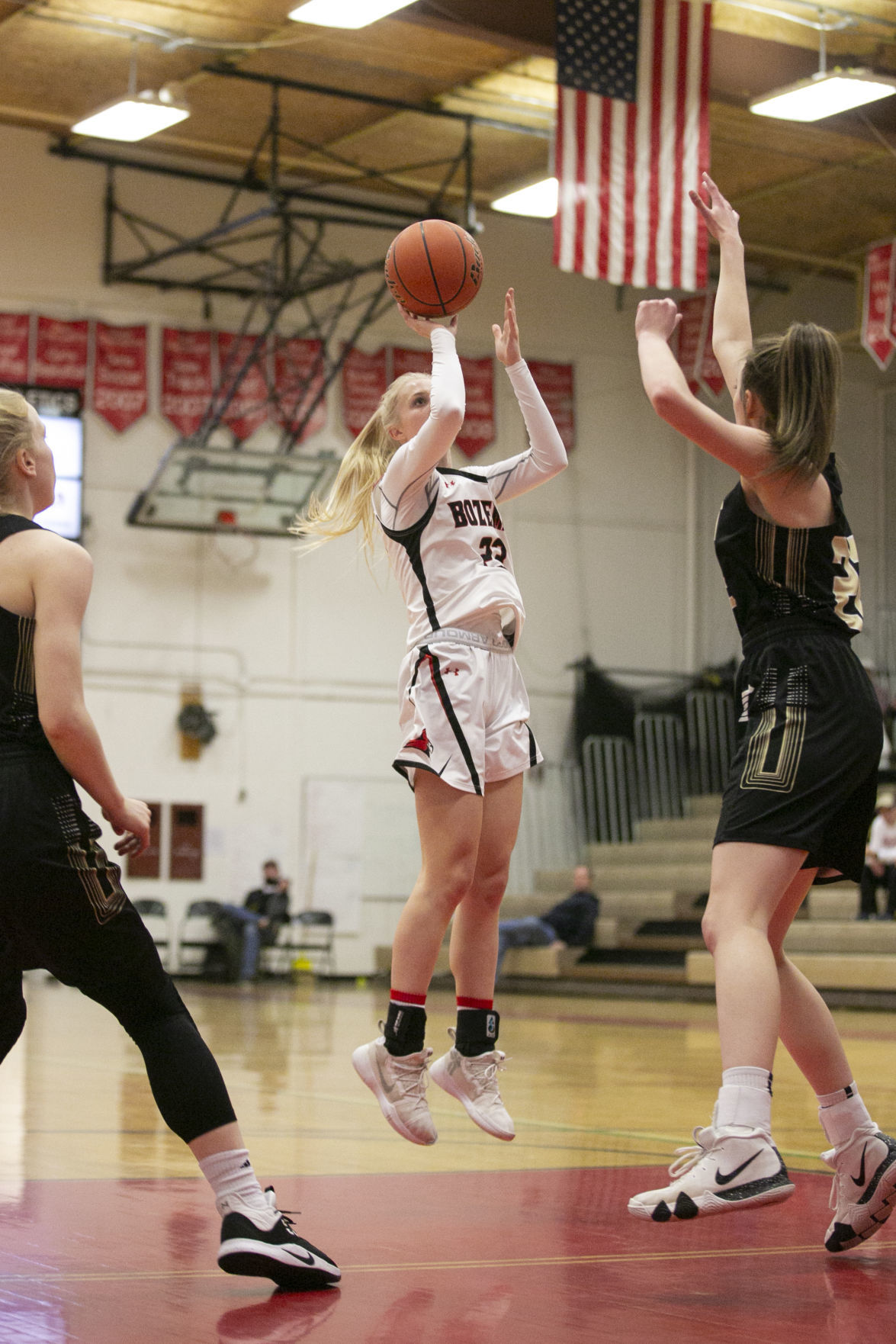 Bozeman High junior Addi Ekstrom takes a jumper during a game against Billings West on Tuesday at Bozeman High. 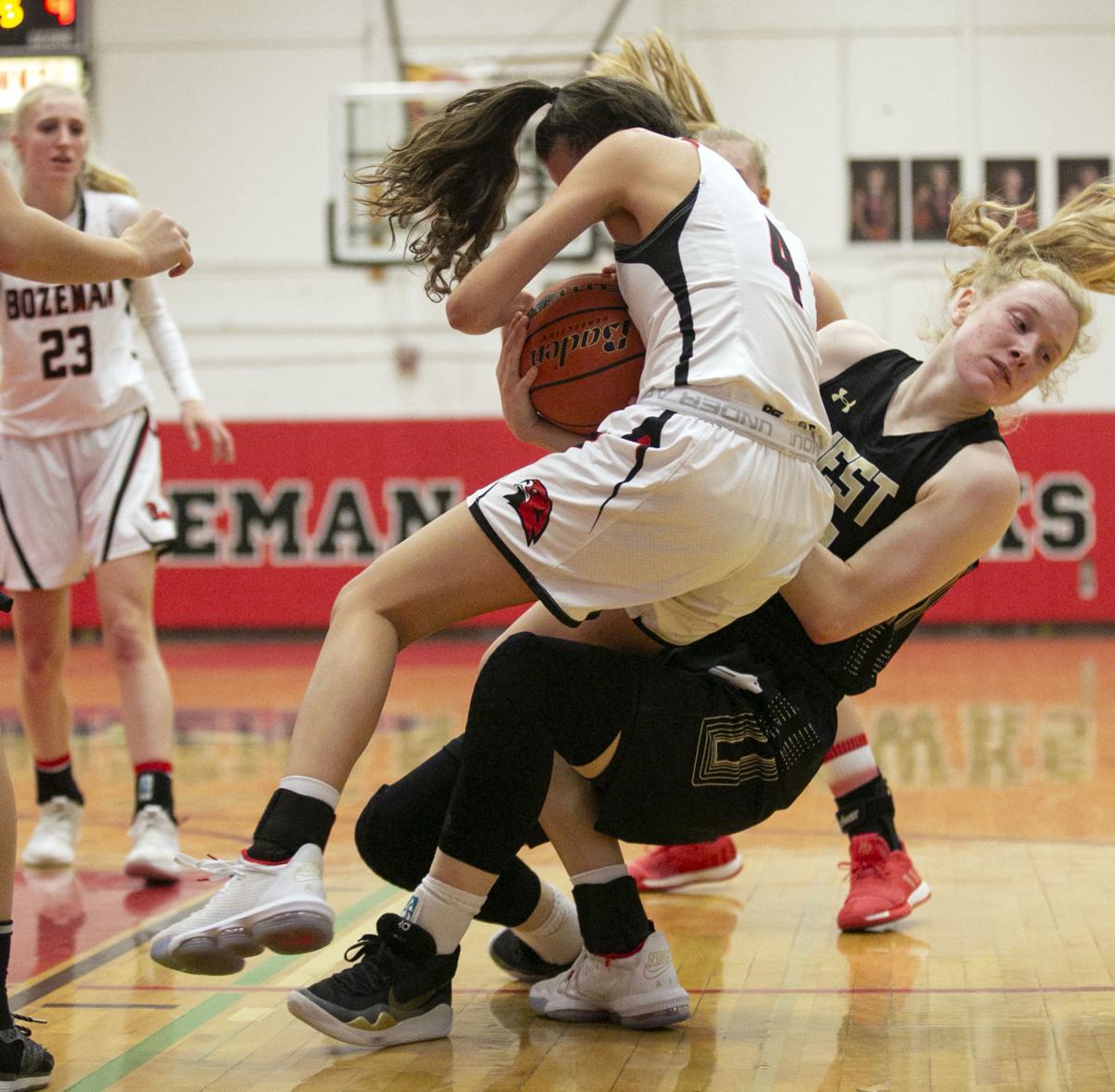 Bozeman High junior Gabby Klein forces a jump ball during a game against Billings West on Tuesday at Bozeman High. 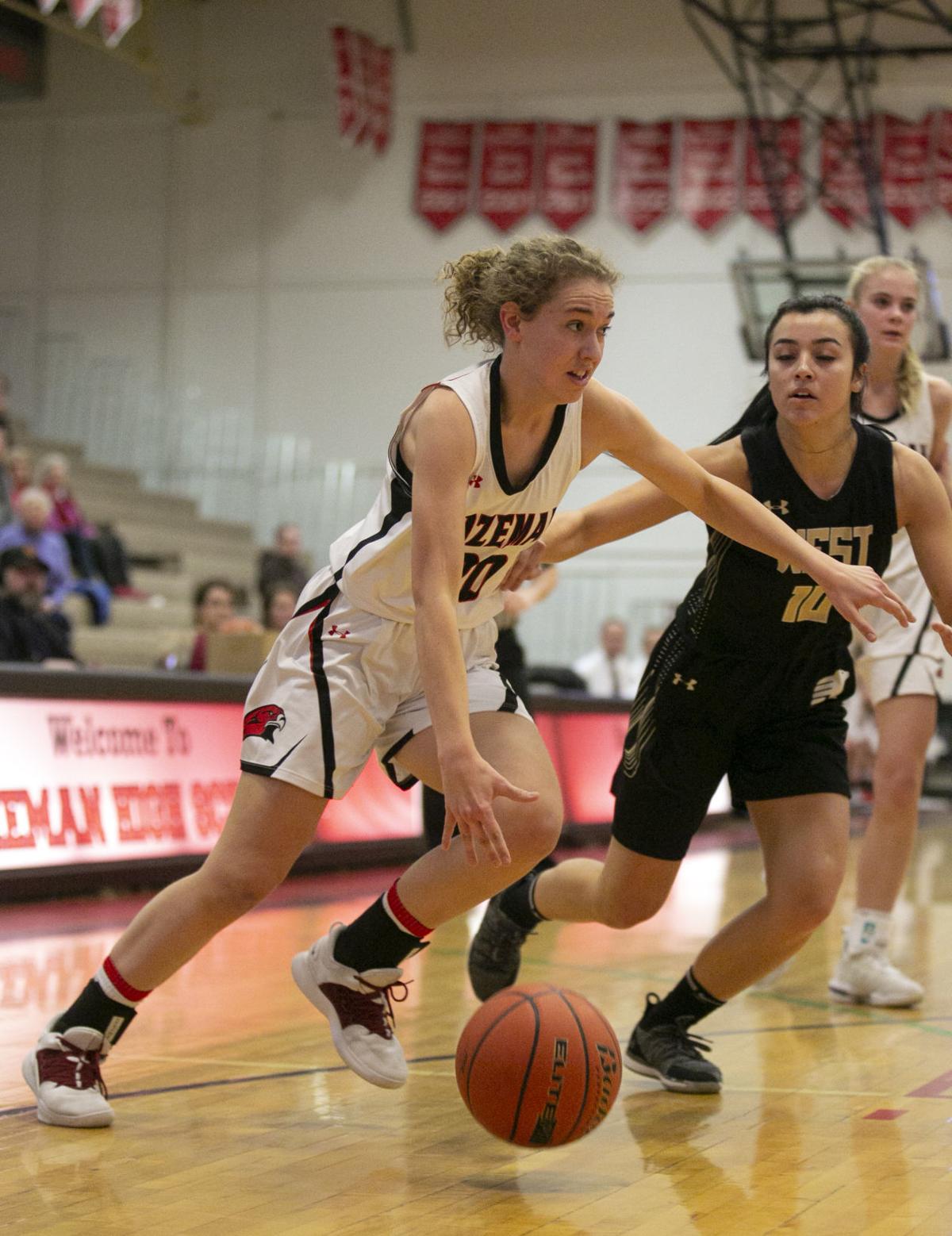 Bozeman High senior Lucy Child drives with the ball during a game against Billings West on Tuesday at Bozeman High.

Lucy Child spotted up and knocked down a 3-pointer from the corner. Addi Ekstrom unfurled a 3 from the top of the key. The back-to-back shots gave Bozeman life.

Trailing by four early in the fourth quarter, the Hawks needed one more push. Head coach Erika Gustavsen yelled, “Come on, white.” Avery Burkhart blocked Billings West’s next shot. After trailing by 15 earlier, Bozeman was within reach of fully coming back.

But the Golden Bears’ Shauna Stene grabbed the loose ball and drew a foul. The margin swelled to six, and the Hawks never came as close again.

West held off every Bozeman (3-6, 2-2 Eastern AA) rally to secure the 58-47 win Tuesday at South Gym. Though the Hawks’ style led to numerous runs, none ripped the lead from the Golden Bears’ grasp.

“We weren’t in a really great flow on either end of the floor,” Gustavsen said. “I was really pleased with how we came out in the second half. Started executing, took care of the ball, rebounded a little bit better and gave ourselves a chance.”

Bozeman pressed for the entire game for the first time this season, and the strategy nearly paid off. Gustavsen thought the Hawks matched up well with West in terms of athleticism and wanted to use that to their advantage. Despite a slow start that featured an 11-point deficit at halftime, Bozeman responded.

Each team scored 31 points in the second half, a testament to the turnaround the Hawks made. They had chances to capitalize even further but missed open shots from the high post and behind the 3-point arc.

After making a couple baskets in the second half, Bozeman had a greater opportunity to start a run due to the pressing style. Though it didn’t necessarily lead to steals, it began to dictate the tempo of the game and allowed the Hawks to scrap their way back.

“We didn’t really have anything going,” Mayer said, “and then those runs really helped us keep that momentum.”

Late in the first quarter and early in the second, West exploded for a dangerous run that created separation. The Golden Bears outscored Bozeman 15-2 in the span and controlled the game on both ends.

Gustavsen yelled, “You have to box out,” when West’s Kaitlin Grossman drew a foul off an offensive rebound. Bozeman tightened up as Emily Williams took a charge and the Hawks forced a 10-second violation with the press.

But West’s barrage continued as Willa Albrecht sliced through the lane or shot from the perimeter, scoring with ease either way.

Early in the third, Albrecht stole the ball and took it all the way to the rim. She made a layup, drew a foul and hit the free throw. After another West defensive stop, Albrecht nailed a 3 to put the Golden Bears up 15.

“When you got two girls like the Albrechts, that’s just a tough matchup for anybody,” Gustavsen said. “But I was really proud of how our kids competed. Didn’t give up.”

The Hawks answered by pulling off a 12-1 run. Mayer and Ekstrom each hit 3s. Gabby Klein caught a pass in transition, threw up a layup high off the backboard as she was pushed from behind and converted the shot and free throw. She absorbed hugs from teammates, and cheers energized the gym. Bozeman trailed 34-30.

The Hawks came within four again with six and a half minutes left. The final points needed to regain the lead for the first time since the opening quarter never came, though.

Gustavsen pointed out how Bozeman trimmed its turnovers from nine in the first half to two in the second and lost the rebounding battle by only three after halftime.

“We got open looks,” Gustavsen said. “Toward the end of the fourth quarter, we got four or five open looks in the high post that if you get a couple of those to fall, that could make a difference too.”

As she reflected on the game, Gustavsen was pleased with the turnaround in the second half.

But against the Golden Bears, it wasn’t enough.

“We have to play four consistent quarters,” Mayer said. “I think we really played good in the second half. We just have to make sure we carry through all four quarters.”