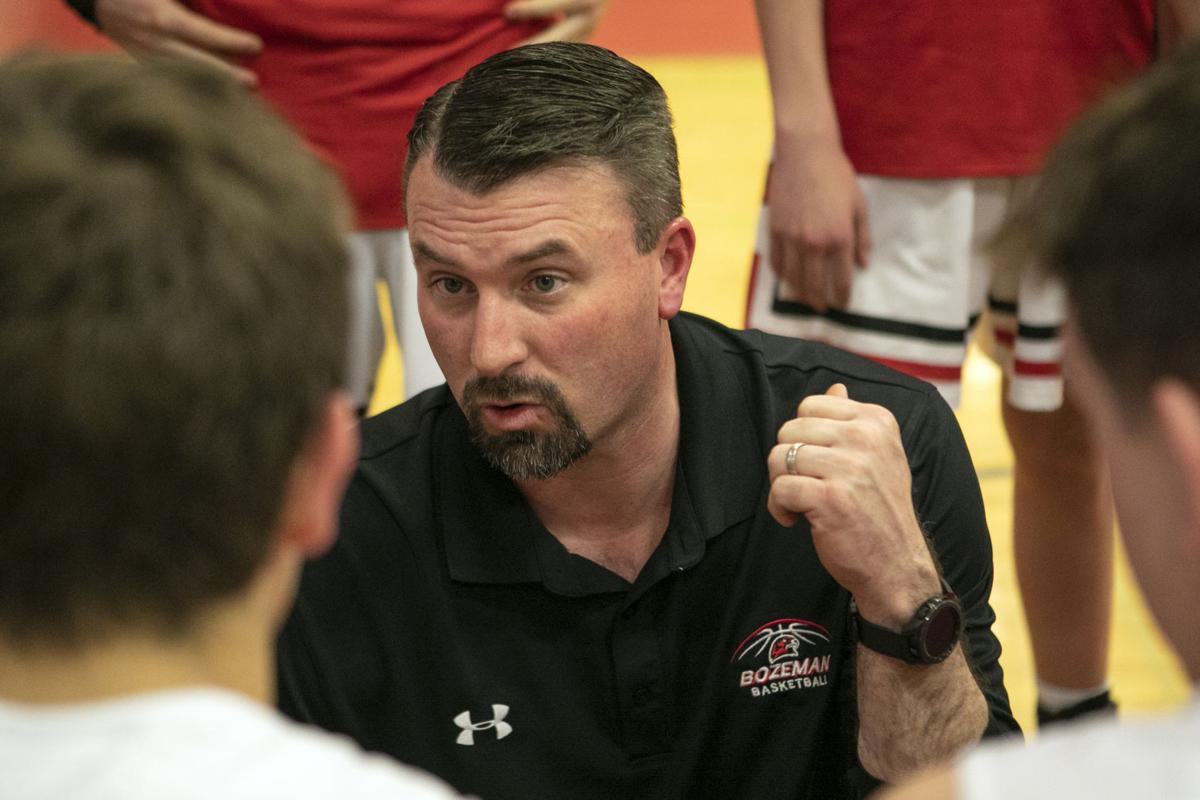 Then Bozeman boys basketball head coach Wes Holmquist talks to his team during a timeout Feb. 11 at Bozeman High.

Then Bozeman boys basketball head coach Wes Holmquist talks to his team during a timeout Feb. 11 at Bozeman High.

This is not how Wes Holmquist imagined he would be starting a program.

After about 15 practices, Gallatin still hadn’t installed a press-break offense or out-of-bounds plays. The Raptors still haven’t competed in a game-like environment. Holmquist, head coach of the first-year team, is still trying to settle on a rotation.

Holmquist and the Raptors are eager to start competition nonetheless. Both Gallatin and Bozeman are scheduled to begin games on Jan. 7, the first day of a 14-game Eastern AA regular season schedule for both programs.

This season will be different. Hawks head coach Erika Gustavsen said her staff has to be “extra prepared” to follow all the health protocols necessary to slow the spread of the coronavirus.

Gustavsen is willing to do that if it means her team is playing.

“You’ve just got to roll with it,” she said. “If we’re playing, that’s the most important thing. Whatever things we have to do and hoops we have to jump through to make that happen and to keep our kids safe and healthy and playing, we’re going to do.”

Gustavsen and Holmquist already have thought about the novelty of coaching against each other and game planning for opposing players they’re so familiar with. Gustavsen noted, because of the school split, many of the juniors who happen to play basketball went to Gallatin and many of the sophomores stayed at Bozeman.

Gustavsen is happy more students will earn opportunities to play. But she added that doesn’t change how a Hawks-Raptors game may be “a little bizarre.” Holmquist, previously the Hawks’ boys basketball coach, will now walk the sidelines at Bozeman as a visitor, for example.

“Right now, it’s going to be a fun rivalry,” Holmquist said. “Bozeman High has been a special place to me for a number of years. It’s going to be strange. It’s going to be tough for me to put that stuff aside, but I’m sure once the game starts and we get rolling, it’s not going to feel any different.”

Unlike last season, the Hawks are entering this year as a veteran group. A year ago, they returned just two players with varsity experience. Gustavsen’s goal was to simply see her team progress. Still, they made a run to the Class AA tournament.

This year, the Hawks boast nine athletes who have logged varsity minutes and three returning starters. Gustavsen said her team has endured pressure situations and will know how to handle them better.

Addi Ekstrom, an all-state selection a year ago and a Carroll signee, tore her ACL during the soccer season. However, Gustavsen didn’t rule out the chances of Ekstrom returning to play late this season considering her rehabilitation progression.

Either way, Gustavsen has already talked to the rest of her team about how their roles might be changed without Ekstrom on the floor. Gustavsen remains optimistic they will be ready.

“If we stick to what we’re good at and take care of business on both ends of the floor and use our athleticism and versatility,” Gustavsen said, “I definitely think we’ll be a team in the mix for sure.”

For Gallatin, Holmquist admitted he’s not entirely sure what his team is capable of with no varsity experience. Gallatin has depth, he noted, as he believes up to 11 players are capable of competing at that level.

Holmquist said this season, in his mind, won’t be successful based on wins or losses. He’s rather focused on steady development and observing how resilient the Raptors can be during challenging times.

Holmquist has been proud of his players’ eagerness to improve. That’s reinvigorated his own passion for the sport.

“The biggest thing we’re trying to develop is our culture,” Holmquist said. “From the moment I took this job, that was the No. 1 thing I wanted to focus on is what our culture is going to be, how we’re going to react to the good and the bad. We’ve just been trying to build a foundation. … I can teach them plays, but I want to teach them how to play.”

The start of Montana High School Association-sanctioned sports was pushed back to January, which Holmquist said was “really hard” because the team looked forward to playing its first games.

Because of COVID-19 protocols, Holmquist said some details may be different like travel and meals after games. But he hopes basketball will still provide a sense of comfort for the players through these unique times.

“Everything until the game starts is going to be different,” Holmquist said. “I think once the game actually starts, we’re going to forget about all that stuff.”