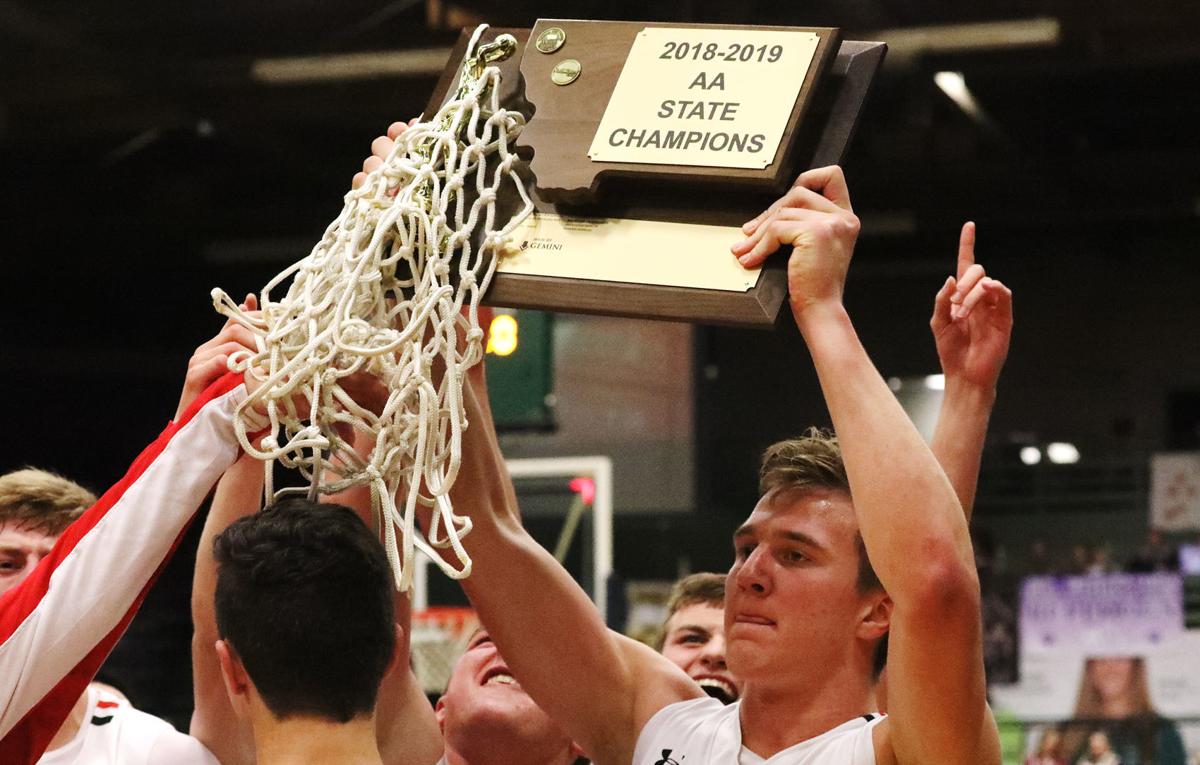 Bozeman’s Ryan Lonergan holds up the Class AA championship trophy after the Hawks defeated Missoula Hellgate on Saturday for the state title. 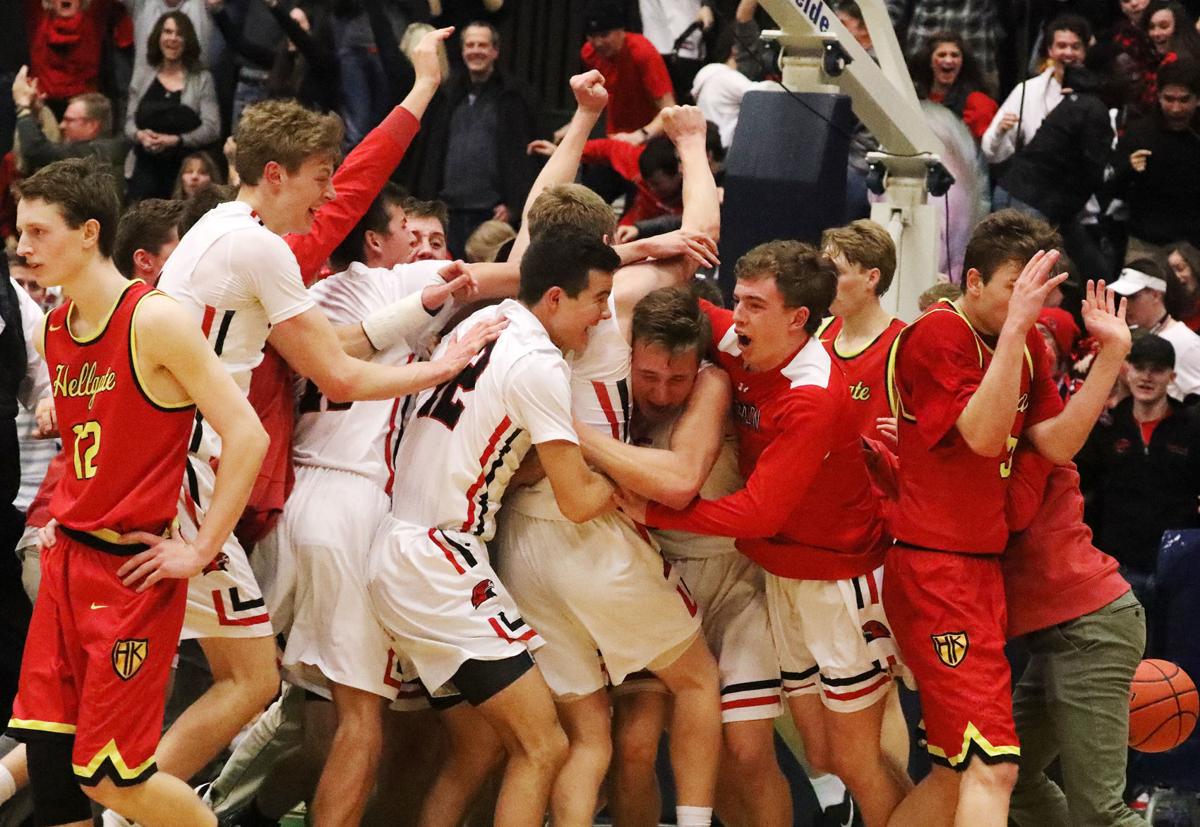 Bozeman’s Ryan Lonergan holds up the Class AA championship trophy after the Hawks defeated Missoula Hellgate on Saturday for the state title.

BUTTE — Wes Holmquist knew he wanted the ball in Carter Ash’s hands. All season long, Ash made plays by setting up others or scoring himself.

So with 4.1 seconds left in overtime and the state championship on the line, Holmquist drew up a play his team had practiced. He trusted Ash to make the play.

But Ryan Simpson’s inbound pass flew from the baseline across the court. Missoula Hellgate’s Fisher Richardson tipped it out of the air, and two of his teammates surrounded the ball. Even though the play was disrupted, it still tumbled right to Ash.

“The ball got where we wanted it to go,” Holmquist said.

Just like Holmquist trusted him to do, Ash fed an open Brett Clark under the basket.

Just like Holmquist preached his team was capable of, a player aside from Bozeman’s top trio made the season’s most important play.

Just like Clark did throughout the second half and overtime, he scored as the buzzer sounded.

The Hawks (19-5) became Class AA champions for the first time since 2011 and ninth time ever. They defeated the Knights 55-53 in overtime on Saturday at the Butte Civic Center.

“I don’t even know, man,” Clark said in the first interview of his life. “Carter got me the ball. Carter’s had a phenomenal year.

Clark finished with a team-high 18 points and a spot beneath his team’s dog pile after the game. Ash and Ryan Lonergan both pitched in 10 points, and Simpson scored eight. Ash, Lonergan and Simpson carried Bozeman this year, but it was the Hawks’ depth that pushed them over the top.

While players were aware of their expectations at the start of the year, they rarely discussed the ultimate goal, the same goal they came one win short of the past three years.

This team was different. This team didn’t just reach the season’s final game. It won it.

But the championship didn’t come easy. Each Bozeman swing was answered by Hellgate and Rollie Worster, who finished with 26 points on seven 3-pointers.

The Knights (21-2) overcame a 12-point deficit in the final 6 minutes, 23 seconds of regulation. They switched into a 1-3-1 zone, trapped the Hawks’ ball handlers and forced turnovers.

To tie the contest, Hellgate closed the fourth quarter on a 17-5 run.

The Knights stuck with their zone in overtime, which trapped guards near midcourt. But the high pressure meant Clark would be open in the lane. He scored in similar ways, first with three minutes left and then with 40 seconds left.

“Coach has been talking all year about someone stepping up,” Clark said, “and tonight I guess it was just my night.”

With 22 seconds left, Worster hit a 3 to put Hellgate up 52-51. Lonergan answered by drawing a foul 13 seconds later and knocking down both free throws. And then with 6.1 seconds remaining, Logan Riddle knocked down one of two at the foul line to tie the game once more.

Holmquist called timeout and drew up the play the Knights broke up. But Ash still grabbed the ball, Clark made the layup and teammates swarmed the hero.

Clark lifted his arms straight up. Lonergan was the first to hug him before Clark was tackled to the ground. Bench players sprinted onto the court and coaches leaped in excitement. When they received the trophy, Lonergan hoisted it toward the student section that chanted for his team all game.

“I kind of blacked out,” Lonergan said. “I was just so happy and excited.”

It was a celebration years in the making.

In 2015-16, Bozeman only lost twice in the regular season and never by more than two points. Then-senior Aaron Weidenaar said after the state championship defeat, “it’s the worst feeling ever.”

In 2016-17, the Hawks only lost three times before the state tournament. Holmquist described the Hawks’ final loss as “gut-wrenching.”

Last year, Bozeman closed the regular season by losing five of seven games before rallying in the postseason and falling one win short. Despite being a senior, Mack Anderson said the loss would serve as motivation for others.

On Dec. 7, when the Hawks played their first game since Anderson’s graduation, he tweeted that his teammates are “just fine” without him. They proved him right in the ensuing three months.

The same way Bozeman filled the void left by Weidenaar and Bennett Hostetler, then Drew Huse, Callahan O’Reilly and several others, the Hawks entered this winter with a new cast. Many former players texted words of encouragement to those who would be playing Saturday.

Two years ago, Lonergan and Simpson were the only sophomores and two youngest players on the team. The duo, now Bozeman’s unquestioned leaders as seniors, had lived through the heartbreak. They felt what Weidenaar felt.

On Friday, Lonergan declared he was sick of taking second.

On Saturday, he helped bring Anderson’s words to life.

After four impressive seasons, the Hawks, at last, had their crowning moment.

“This is as much for them as it is for anybody,” Holmquist said.

In the locker room after the game, the Hawks were joined by former players Robbie Simpson and Latrell McCutcheon. When this year’s team emerged into the tunnel, Lonergan was the first player to greet fans. He wore a celebratory basketball net around his neck and held the trophy. He and his teammates hugged friends and slapped high-fives, accepted congratulations and posed for photos.

Throughout the year, Bozeman ignored its history. But after winning the title, it couldn’t be. When Clark’s game-winning layup fell through the net, Holmquist looked to the refs to check if it counted. Then he felt a weight lifted off his shoulders.

“All I thought about was being there four years in a row,” Simpson said, “and finally coming out on top.”

Since the start of the season, Bozeman didn’t talk much about how each of the past three seasons ended. Instead, the Hawks were focused on this season and this team. But in the back of Holmquist’s mind, he knew Bozeman could make a deep playoff run.

With several players coming off a football season that lasted into mid-November, the head coach gave the team four days off for Thanksgiving for the first time in 11 years. He knew what the Hawks were capable of, they just needed to have “the batteries recharged.”

After a season-opening win against Helena, Lonergan said, “the sky’s the limit” for Bozeman. A week later, following a six-point loss to Hellgate, Holmquist said he liked where his team was at, confident it would improve.

Though Simpson suffered a wrist injury on Jan. 29, his four-week absence forced teammates to progress and develop depth. Without Simpson, Lonergan continued to be a weapon in the paint, and Ash emerged as a go-to perimeter threat. Others such as Kenneth Eiden and Jackson Coles gave the Hawks a boost off the bench. And Clark remained steady, all the way through the state championship’s final shot.

And since Simpson returned for the divisional tournament last week, the Hawks closed the season with six straight wins, culminating in Saturday’s triumph.

“The big thing I’ll remember from this group,” Holmquist said, “is perseverance.”