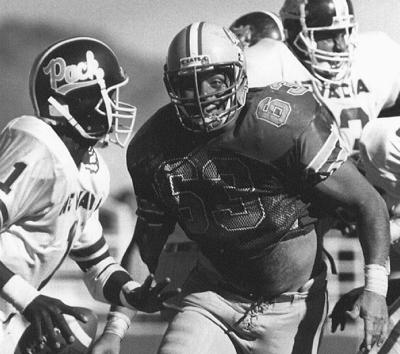 “It’s difficult to even figure out quite where to begin,” Corey Widmer admits as he settles into a plastic chair in the Chronicle break room on a recent afternoon.

“I’m hoping this will help.”

The former Montana State star and New York Giants fixture is anxious. He’s been that way for weeks, he surmises, possibly longer. Days earlier he was exploring Australia’s Gold Coast, touring properties, submerging his feet in the warm sand, occasionally venturing into the waves. Nothing provided relief.

Such is why he spared no expense altering arrangements and traveling halfway across the world. Why Tuesday afternoon he extended a firm handshake and an uncompromisingly raw, honest account of life during and after football, a game that engendered wealth and fame but cost him dearly in return.

It is not the story with which he would have felt comfortable regaling the crowd at this evening’s Montana Football Hall of Fame enshrinement ceremony in Billings. He decided to withdraw his name.

“I think if I’d be putting that jacket on right now I’d probably puke,” concedes the Bozeman High graduate. “I don’t think I’d be able to shake a hand. And that’s why I’m doing it this way; I don’t want to make some political statement right in the middle of their party and take advantage of some very nice people.

“I can’t sit up there and tell interesting stories and how cool it is — the camaraderie, the fame, things like that — and have somebody else say, ‘Well, if that local kid can do it, so can I.’ It just doesn’t work that easy. … I’d never want to give somebody the impression that football is safe and that the injuries are short term. They’re not. I’m proof of that.”

In the nearly two decades since a back ailment unceremoniously ended his career after eight seasons, Widmer largely has receded from public view and from the sport. He says he has never attended a camp and never delivered an inspirational speech. He has not offered to advise recent graduates at his alma mater intent on pursuing lives in the professional ranks.

He has chosen to remain silent.

He says he has been consumed of late, however, by thoughts of young children being handed a helmet and a false sense of security. He is concerned parents and players do not possess all the facts and are not keenly aware of the risks.

His Hall appointment provided the impetus for change.

He is not naive enough to think football will disappear — the NCAA and NFL, with which he currently is engaged in a lawsuit, are far too influential and the sport too ingrained in the social fabric. Widmer does, however, advocate delaying full contact until at least the senior year of high school.

“If we can just have parents take another look at these kids and the potential dangers for the most prized possessions in their life, maybe they could put that off for a few years,” he says. “This deserves 100 percent focus, not just reading a piece of paper. I understand people don’t like the government ruling their lives and taking away their choices, but I just think some choices are better than others.

“Watch the movies, look at the slides or pictures of people’s brains. I think people are aware, but I’m not sure how many fully get the point.”

Let Widmer be Exhibit A.

He’s approaching 50 and bears a passing resemblance to the 6-foot-2, 250-pound middle linebacker who once commanded the respect of the league and a $12 million contract from the Giants. Fine lines converge in the corners of each eye and his gait is deliberate, the consequence of two back surgeries and more than a decade’s worth of high-speed collisions.

Something far more sinister appears to be lurking beneath the surface as Widmer grips a pen and begins to crudely sketch a normal brain alongside one decimated by chronic traumatic encephalopathy. His right thumb is twitching.

This has happened before, mostly while scrolling through his cell phone, but never quite like this.

“What is it? Am I getting Parkinson’s?” Widmer wonders aloud.

The day everything changed was during the 1997 or '98 season, Widmer is not quite sure. The details are far more clear — chasing a ball-carrier to the sideline, falling backward, the violent impact of helmet with unforgiving turf. He remembers his brain rattling against the back of his skull, though not the few moments the medical staff told him he was unresponsive.

Had he been left alone, Widmer says he would have fallen asleep on the ground, surrounded by teammates, opponents and some 80,000 fans. Instead, he was hauled off the field, and a day or so later, into a room to meet with a young female researcher from the University of Pennsylvania. He was handed a stylus and asked to track dots flickering on a computer screen.

“The emotional change was instantaneous,” Widmer recalls. “That’s how a hurt brain tells you something is wrong, just like a knee being sore.”

He stood up, hurled the instrument and a few insults before storming out. He was irrational, impulsive, out of control.

Similar behaviors compelled Widmer to lunge off the sideline and into the middle of a practice skirmish soon after — in street clothes, no less.

“I was ready to fight anybody, even the girl giving me the test, because I thought she was going to end my career,” Widmer recalls. “I’m not the kind of person that gets that kind of rage and spits fire out of their eyes. … I wasn’t born that way.

“Something as simple as standing in line or in traffic would set me off. I lost the ability to take a breath, take a step back and ask myself, ‘Is this really worth it?’”

He pulled away from those closest to him, finding it easier to avoid people than the impulsion to act out. He asked that his family not be contacted for this story.

It wasn’t long after his playing days concluded that he and his live-in girlfriend separated. She took the dog and he left for Florida with a vacuum cleaner riding shotgun.

“I remember once being in the mall holding hands and all of a sudden just pushing her hand away. Something was so irritating that I had to do something to get rid of it,” Widmer recalls. “I figured that if I was frustrated like that around her, maybe she’s not the right girl for me. And I’ve done that ever since.

“Frustration, anger, irritability, those are all traits you really don’t want to put on display in front of the ones you love. To this day I find it difficult to put myself out there for other people because I really believe that sooner or later, my attitude is going to be a buzz kill.”

He craves opportunities to “go get lost.” Visiting Australia was as much about a possible property purchase as it was immersing himself in a foreign and stimulating environment. Monotony can cause depression to fester, he says.

In the past, he says he has boarded trains with no itinerary. He once bought a motorcycle in New Zealand, plotting a new course at each intersection.

“A normal person needs to know where the next hotel is going to be or have a map. I didn’t even wear a watch — I haven’t since I retired,” says Widmer, tugging at his shirt jacket cuff to reveal his bare wrist.

There’s no escaping a sobering reality.

Dr. Bennet Omalu was first to unearth the devastating link between football and CTE, which Widmer experienced while watching former opponent Kevin Turner’s public and rapid deterioration before his 2016 death at the age of 46.

“He couldn’t even hold his son,” Widmer says of the former Eagles and Patriots fullback, one of the lead plaintiffs in the original lawsuit filed against the NFL, of which Widmer remains a party.

“I would’ve chosen suicide over the way he died, but I think Kevin did that in order to show people the truth about football. How many people he has helped is a testament to how he lived his life.”

Widmer is grateful — “I still have my health, or what’s left of it,” he says — but his future uncertain. There is the twitching. He still experiences sensory overload when surrounded by crowds. His memory is unreliable. Names easily escape him. He could not tell his sister where to find his house key while he was overseas.

The facts are incontrovertible, he says. Last summer, Dr. Ann McKee of Boston University’s examination of the brains of 111 former NFL players resulted in 110 diagnosed cases of CTE, according to multiple reports. While no test exists to detect the affliction in the living, Widmer arrives at the only logical conclusion.

“There’s no way to exclude myself from a group that’s basically 100 percent,” he concedes. “I have to assume I have some form of it and that it will continue to manifest itself.”

What can he do?

Be diligent in monitoring his health and the warning signs, for one. He also can speak up.

This is no scorched-earth campaign against organized sports, or anyone in particular, Widmer repeatedly insists. He simply is aiming to disseminate the unfiltered truth, to follow Stevens’ lead and no longer waste time wallowing in silence.

There is too much at stake.

Perhaps if a former professional speaks out, the community will be more inclined to listen. Widmer knows he sure would have.

“I’m 49 years old, depressed to the Nth degree but have a lot of money … and some people might say it’s still worth it. I just tell them to watch what they wish for,” Widmer asserts. “If someone could’ve explained all of this to me when I was 14, I would’ve given it all back in a heartbeat. I would’ve wished for something else.