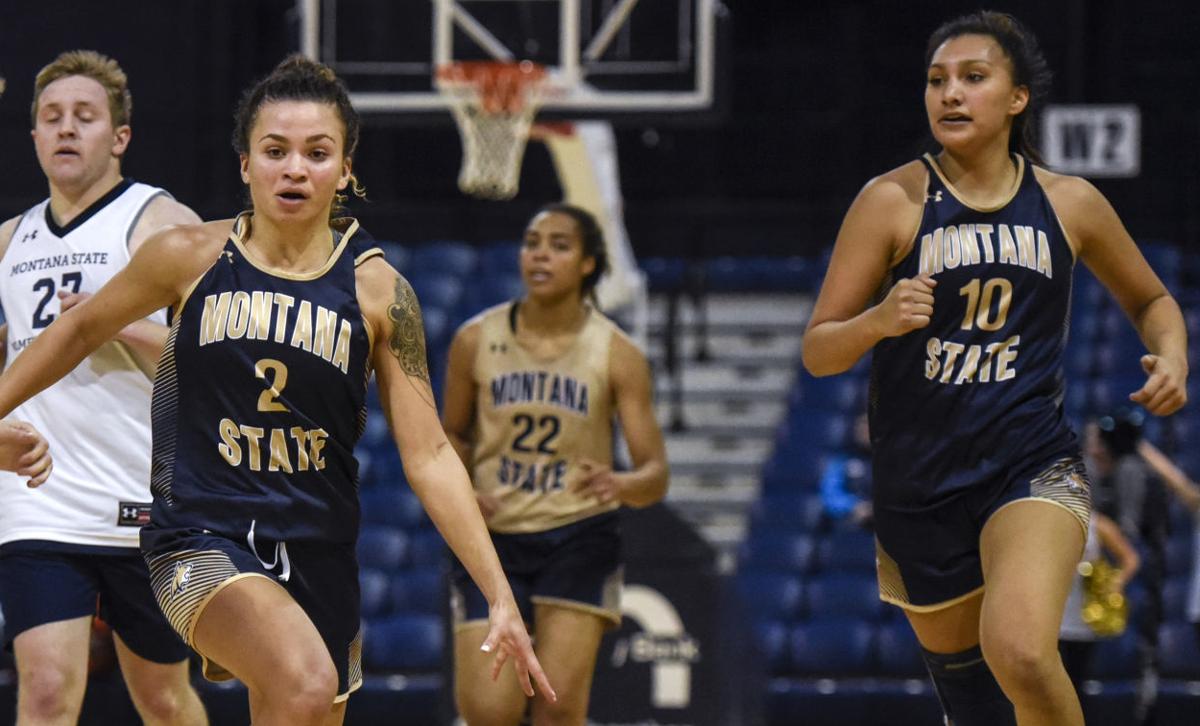 Montana State’s Darian White takes the ball in during a scrimmage on Oct. 18. 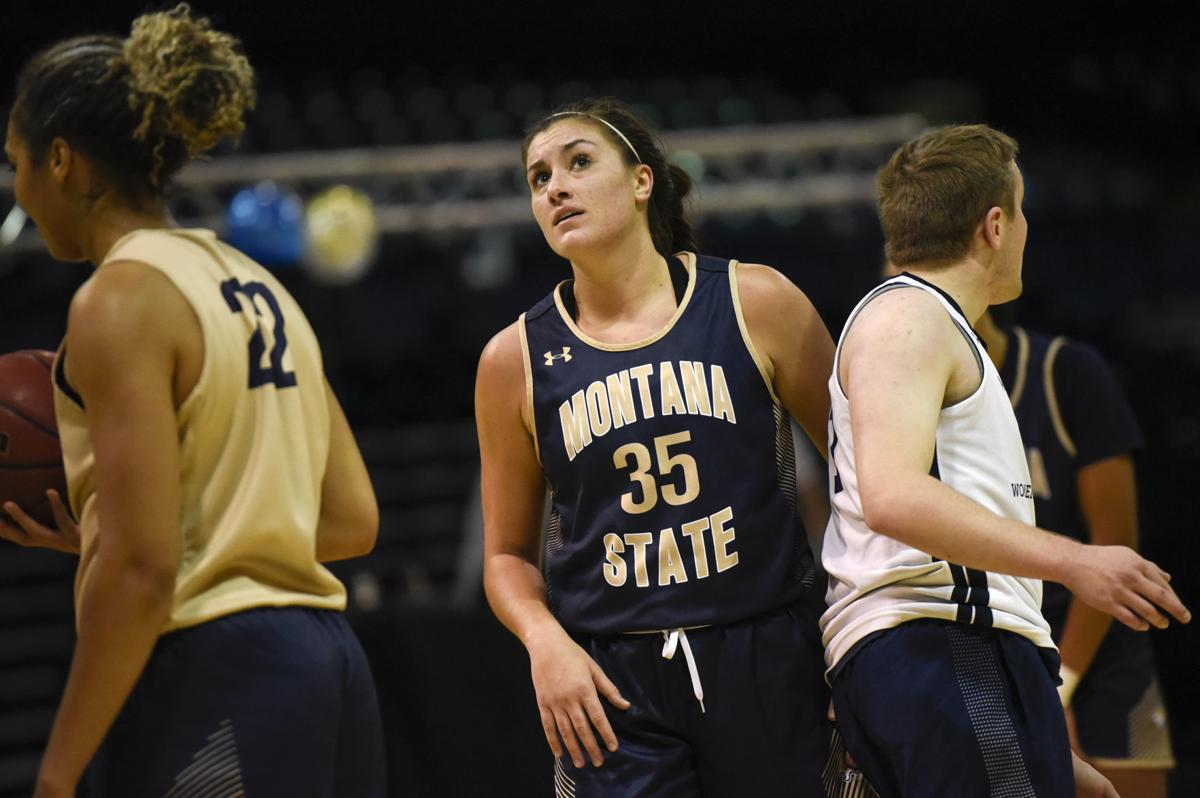 Montana State's Fallyn Freije checks the scoreboard during a scrimmage on Oct. 18 at Worthington Arena. 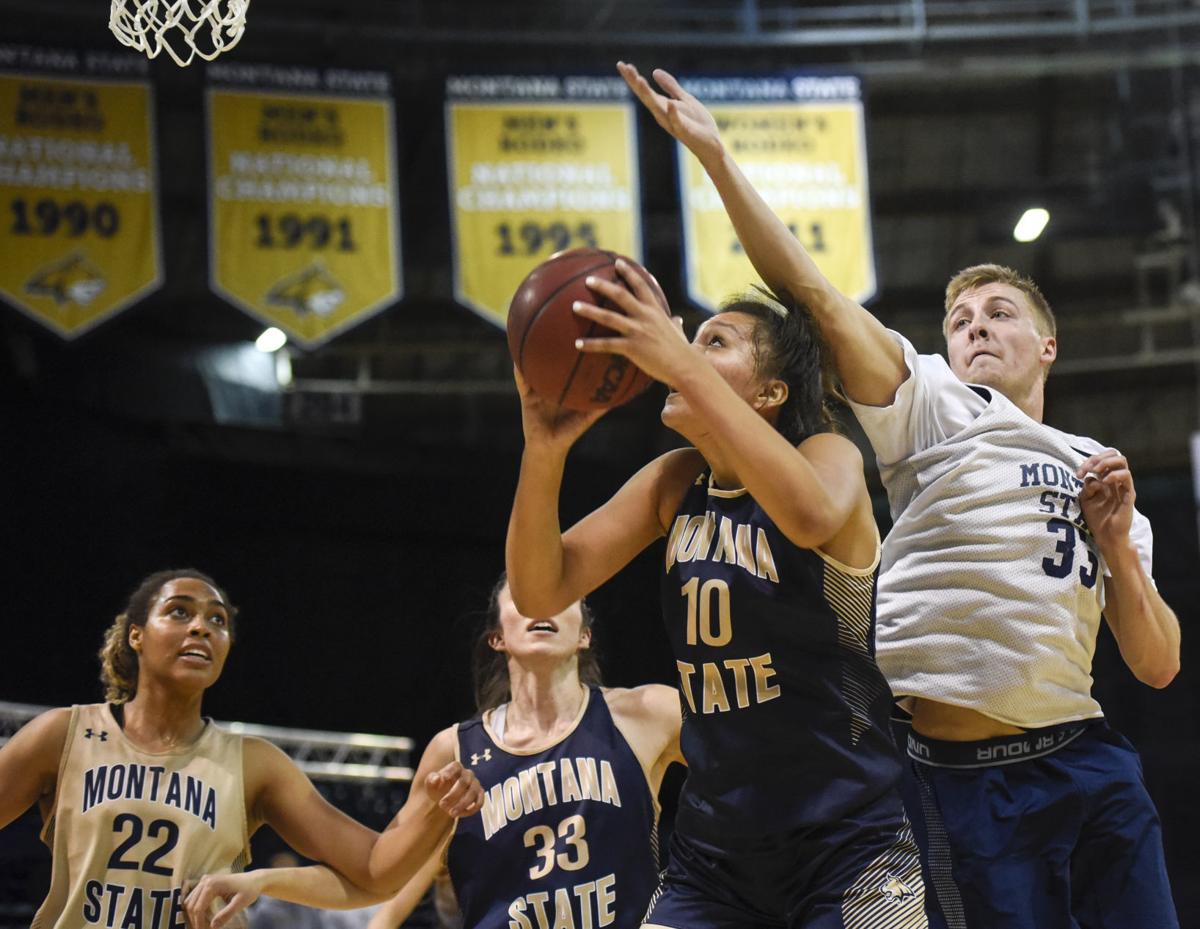 Montana State's Kola Bad Bear takes the ball to the net during a scrimmage Oct. 18 at Worthington Arena.

No matter the circumstances, Darian White needed to be a supporter.

The Montana State true freshman was beginning the season as the team’s starting guard. Her skill was apparent since she began practicing with the Bobcats. Yet White believes she earned her role with effective communication and setting an example for the rest of the team.

When the Bobcats trailed early in an exhibition game against Northwest Nazarene in early November, White knew she was needed in more ways than just hitting buckets. She provided a boost for her team with verbal encouragement.

“Things weren’t going as we planned,” White said, “so being positive and knowing things would get better.”

Things have been better for White and the Bobcats new to the team. MSU newcomers have made a key impact so far this season and are expected to continue to do so when the Bobcats (4-2) host No. 18-ranked Gonzaga (6-1) at 6 p.m. Thursday at Worthington Arena.

“They’re huge,” Bobcats senior center Madeline Smith said of MSU’s new players following the exhibition win over Northwest Nazarene. “We needed them to step up and be able to execute just as well as we can. We had a lot of first-game jitters, so it was nice to have a deep bench. And I think that’s something we’ll be able to turn to a lot this year.”

White was both nervous and excited before the exhibition, but she’s settled in. She paced the Bobcats with 15 points and six rebounds in MSU’s season-opening win over UC Davis. She’s second on the team behind Oliana Squires and is 20th in the Big Sky with 10.5 points per game on 37.5% shooting from the field and 41.7% from 3-point range.

“She works hard every day in practice,” White said. “I don’t have a shot like her, but she always talks to me about things I can do better and what I can work on. But it’s always encouraging.”

Despite standing 5-foot-6, White has also led the team in rebounds twice in six games and is fifth with 4.2 boards per contest. The Boise, Idaho, native also leads the Bobcats with 22 made free throws and is second with 2.5 assists and 1.5 steals a game.

Binford wanted White to start because she can handle the ball like a point guard opposite Squires. So if an opponent presses either, they can work off each other and get past defenses.

“I think she’s just going to continue to get better and better,” White said. “I think she sees everyone on the floor. She obviously has quickness with a really, really strong handle.

“So that’s why we’ve trusted her to take that (starting spot). The upperclassmen have done a great job of bringing her along and running with it.”

Big Sky preseason player of the year and senior Fallyn Freije, in her first and only season playing for the Bobcats, is right behind White with 10.3 points a game and is tied for sixth in the Big Sky with seven rebounds per contest.

Binford has also continuously mentioned the impact other young players have made. She likes the production Kola Bad Bear has provided, for example. The 6-2 freshman forward from Billings averages 3.4 points and 3.1 rebounds in 13.8 minutes. She provides a key post presence whenever Smith or senior forward Blaire Braxton are off the floor.

“She’s awesome. She posts up hard every single time,” Smith said of Bad Bear. “And she’s just really active so she’s going to be really helpful this year.”

White feels she’s in a position to thrive because of the upperclassmen around her. If she doesn’t hit a shot, Smith can rebound. If she misses a pass to Squires, the senior can adjust.

But as she and the younger Bobcats work through mistakes, Binford hopes their experiences set them up for improvement by the end of the season.

“They’re so much fun to play with. They work hard. They have a high IQ,” White said of playing with MSU’s upperclassmen. “In high school, there’s nothing like this.”