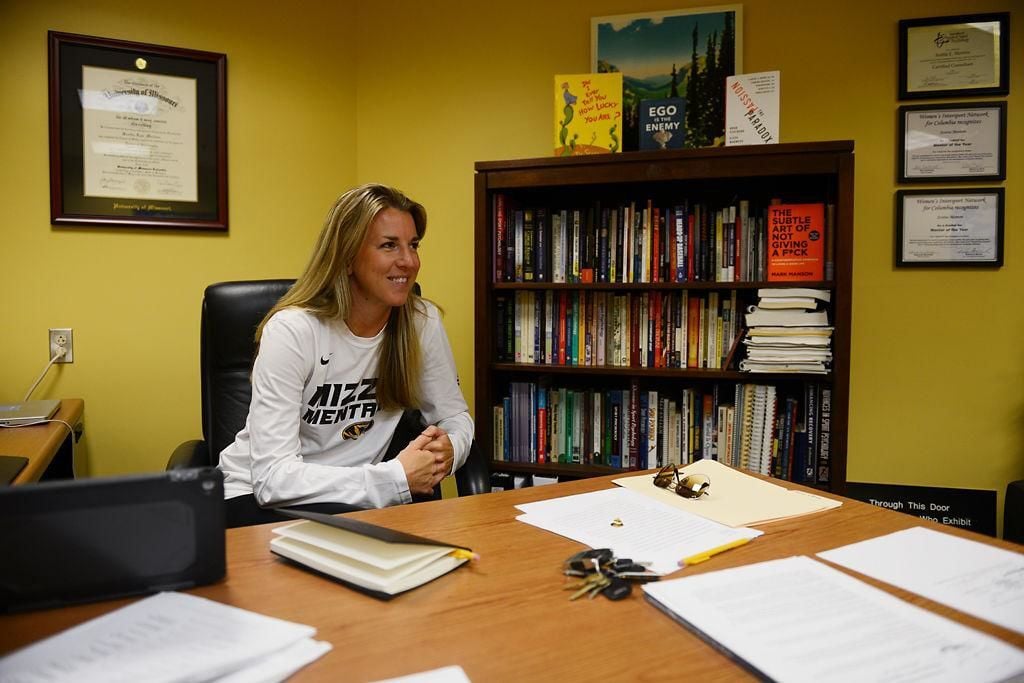 Bozeman native and former Montana State women's basketball player Scotta Morton sits at her desk in 2019. She is the director of mental performance for Missouri Athletics. 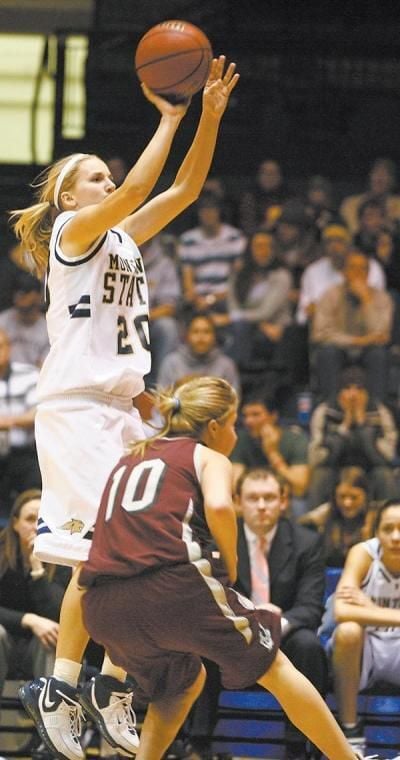 Scotta Morton’s on-court performance often dictated her mood. As a basketball player at Montana State, whether she accomplished her goals determined her happiness.

I’ll be happy when I’m starting and averaging a double-double.

I’ll be happy when I make the all-conference team.

I’ll be happy when our team wins a championship.

Instead of focusing on the present moments in games, her mind wandered back to those goals. Her thoughts then consumed her. She described herself as having “a big armor” and a fixed mindset believing she had to live up to expectations.

“The problem with the ‘I’ll be happy when’ thinking is one, you might not ever get those things. You’re setting yourself up to be miserable,” Morton said. “And two, even when you get those things, they’re not fulfilling. You just want more of it. I was on that path for a long time.”

Morton graduated from Bozeman High School in 2003 and played at MSU from 2003-07. Her playing career, which included a mentality she said “wasn’t ideal,” laid the foundation for her professional life. She went on to earn a doctorate in sports psychology from University of Missouri, join the school’s athletic department and now is the director of mental performance for Missouri Athletics.

As the field of mental performance has gained prominence within college athletics in recent years, Morton has been at the forefront. She learned under Rick McGuire, who developed Missouri’s Positive Coaching School and is considered a pioneer in the area.

“I’m so glad for the experiences that I had,” Morton said. “That adversity at the time, it felt like a lot, that’s all that I knew. It helped really shape who I wanted to become.”

In the mid-2000s, there was a stigma that people met with psychologists “to get fixed,” Morton said. She didn’t want to do that. What she thought sports psychologists did wasn’t quite accurate, she acknowledges years later. Instead, they focus on building skills to train the mind to lead to peak performances. The job is more about developing thinking tools in advance to prevent issues later.

As a player, Morton didn’t want to “dump all my feelings and share my insecurities.” She frequently gutted out hard practices and battled through conditioning drills. But that version of mental toughness didn’t include a vulnerability Morton now considers crucial.

Despite playing collegiately in her hometown, Morton’s journey became lonely because she didn’t fully open up or explain to friends and family what she was going through. Thinking about expectations and pressure pulled her away from her intrinsic motivation.

“I saw most performances as threatening to who I was as opposed to an opportunity to go out and be me,” Morton said. “(My relationship with sport) wasn’t framed to help me go out and play free because of the stuff that got in my way.”

When her playing career ended, Morton earned a master’s degree from MSU and went on to Missouri. Over the years, her approach shifted. She now teaches athletes how to alter their attitudes.

Even if outcomes don’t materialize the way they want, Morton teaches not to tie personal identity to on-field success the way she did.

“It’s more about building it now,” Morton said, “so we don’t have to fix it.”

When Morton began at Missouri, one of the first things that stood out was her listening skill, senior deputy athletic directory Sarah Reesman said.

Morton works with athletes individually and also relies on coaches to provide a shared vision and messages similar to each other. She attends practices and travels to games, becoming a regular presence around teams.

“She really takes time to get to know coaches and teams and just listen and observe,” Reesman said. “She doesn’t try to insert herself into things. She lets teams and programs come to her, which really helps create trust.”

A couple times per year, Morton visits Bozeman. She’s worked recently with Montana State’s women’s basketball team, reconnecting with head coach Tricia Binford, who she played for as a junior and senior.

Rather than coming across as Dr. Morton, she tries to explain to players how she was in their shoes.

“She’s extremely gifted. She’s articulate,” Binford said. “But she puts it in a perspective that kids can really relate to. She gives them nuggets.”

Morton often explains how to become more mindful so thoughts and emotions don’t hijack players from the present. She discusses a shift in what it means to be “mentally tough,” expanding the definition to include having courage to be vulnerable.

She reframes the meaning of failure, sharing that the pursuit is more important than the outcome. Similar to Theodore Roosevelt’s “Man in the Arena” concept, Morton believes failure isn’t aiming for something and coming up short but rather never aiming in the first place.

“Our team never would have had the kind of rich, open discussions,” Morton said. “Not because we weren’t capable of it, just because sports psychology and mental performance, ... that was just not something that was really available at the time.”

Morton describes the work she does as committing to a path of endless growth. Once on that path, the growth can become addicting.

All her tools help athletes adjust their mindsets in a way that’s different from how Morton thought while she was playing. She doesn’t regret the path she took, but can now reflect and recognize strategies that may have helped her as a player.

“As a former student-athlete who went through a lot of ups and downs in her career,” Reesman said, “I think that foundation really developed her own persona in this field and how she approaches it.”

The skills Morton coaches are designed to help athletes compete and are also applicable to other aspects of life.

Instead of allowing sports to define them, Morton tells students to use sports as a vehicle to grow into the person they want to become.

Morton’s career path is an example of just that.

“I wouldn’t want to do it differently,” Morton said.

After playing in the NFL for a few seasons, Travis Dorsch has pursued a career in psychology, studying how families affect children’s youth sports experience.