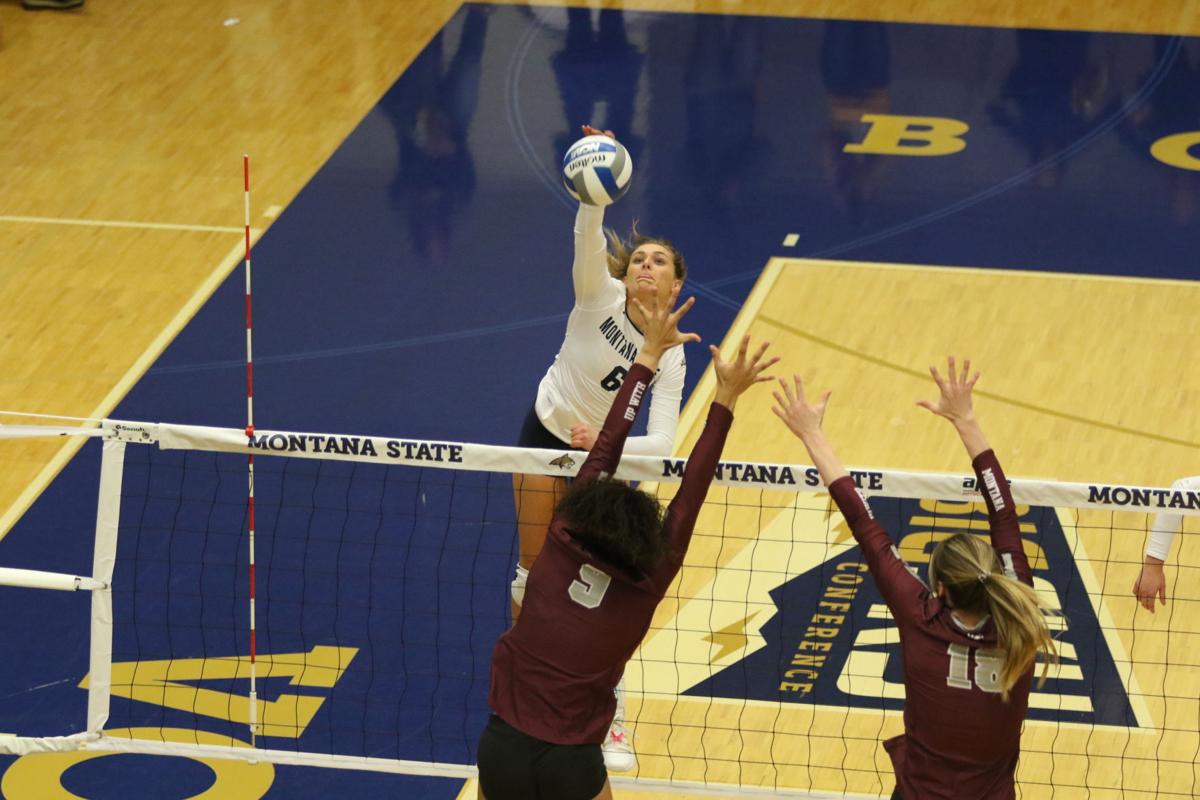 Montana State's Kira Thomsen goes up for a kill against Montana last year at Shroyer Gym.

Montana State's Kira Thomsen goes up for a kill against Montana last year at Shroyer Gym.

Shroyer Gym won’t be littered with Montana State volleyball fans this fall. Instead, it will be utilized as a learning space for students as the university makes the most of its facilities.

Bobcats head coach Daniel Jones is fine with that. Academics are the most important part of college in his mind. His team has been able to practice this month, anyway.

But that doesn’t change how unusual it all is for the Bobcats, who were coming off of one of their most successful seasons in recent years. The Big Sky postponed all of its fall seasons to the spring because of coronavirus pandemic concerns, meaning MSU will have to wait before it can try to take another step forward as a program.

“I think there’s a natural sense of disappointment,” Jones said last week. “You get kicked out of your usual rhythm. But it doesn’t change, in the conversations that I’ve had with the athletes, it does not change the trajectory that we’re on.”

The Bobcats were predicted to finish fourth in the conference’s coaches preseason poll. They were set to return 12 players from last year’s team, which was 15-14 overall and 10-8 against Big Sky opponents.

The Bobcats’ 15 total wins in 2019 were their most in seven years, and their 10 league wins were their most since 2004. MSU, in its second straight conference tournament appearance, won its first tournament match since 2005 when it defeated Sacramento State.

“I think one of the beautiful things for us is we’re on this great trajectory, and our athletes are far from reaching their potential,” Jones said. “We have so much room for growth with each of them that all it does for us is give us a better chance to prepare.”

In fact, he laughed as he realized that the Bobcats will have five months to gear up for a season rather than the typical three weeks in preseason practices. He feels competition will be a more “complete product” than traditionally in the fall.

“I just think that there’s been such a great enthusiasm about what we’ve been trying to do that it will just continue,” Jones said. “The job is not done. It’s delayed, but one of the things we talked about in the program is perspective.

“There’s two sides to every coin. Yeah you can look at the situation with disappointment of being delayed. Or the other side of the coin, you can look at it and say, ‘Hey we’ve got five months of preparation for a season so we can be in the best shape of our lives.’

“We can be the most prepared, but we can still make the most of every day to do that. That’s the commitment I’m looking for is trying to do everything we can the best we can and compete when the time comes.”

Jones recalled a recent conversation with MSU athletic director Leon Costello, one where he reflected on his journey as MSU’s head coach. It’s included one challenge after another. His first season, his wife gave birth. His second, the Bobcats were down to eight healthy players at one point. Last year, his program only had a two-person coaching staff.

“Here we thought this year was going to be a normal year. It’s not going to happen,” Jones said. “What’s really sunk in with me and given me great perspective is all of the adversity that we’ve experienced previously has prepared us for this adversity. Our theme for the year is that we were made for this. We believe that we were made for this season and that, no matter what the season looks like, we’re prepared for it and are made for it.”

The Big Sky said programs are still allowed to continue with permissible athletics activities while abiding by NCAA legislation, campus policies and local and state regulations. The Bobcats began practicing on Aug. 10 and were “making really good progress,” Jones said.

The Bobcats were actively conscious of the five months they had spent away from the court, Jones said, so MSU’s coaches were deliberate about the players returning in a healthy way. Jones noted “a ton of passion and energy and enthusiasm in the gym.”

But he was unsure of what fall training would look like. He also didn’t know how to handle a spring season if the Bobcats were to commence another in fall 2021. He mentioned how happy he is with the depth of his team, which should make load management easier during those back-to-back seasons.

“We live for these occasions in terms of the opportunity to compete and play and test ourselves and see how good we are,” Jones said. “That’s the purpose of collegiate athletics to me is you get an incredible education at a great university, but along the way, you get these life lessons about how to respond to adversity, how to pick yourself up when you’re pushed over or knocked down. That’s the beauty of athletics. This is just another challenge that we face.”