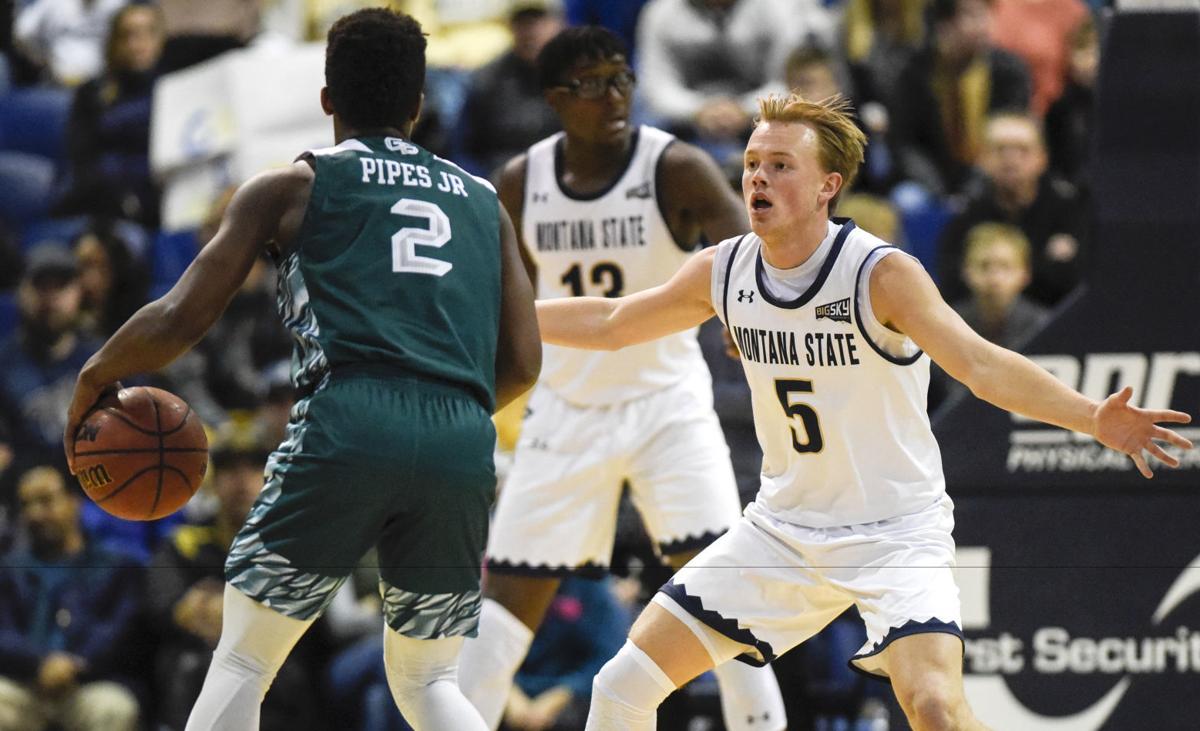 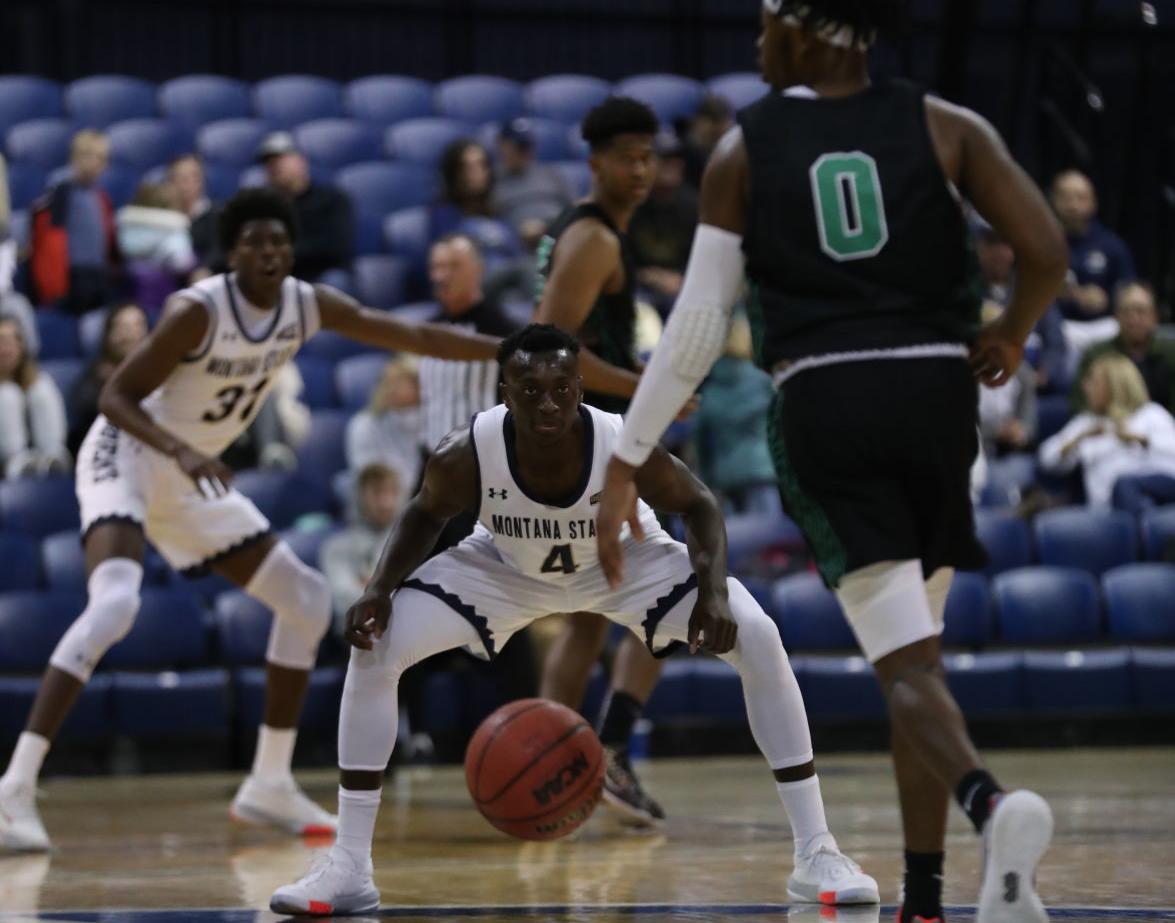 Montana State's Amin Adamu crouches in a defensive stance during an Oct. 30 exhibition against Yellowstone Christian at Worthington Arena.

As Danny Sprinkle rewatched his team’s most recent game against Green Bay, he tracked a startling statistic. Montana State’s head coach observed the Phoenix make 26 jump shots out of their 40 makes overall.

Green Bay shot 62% from the floor and became the first team to shoot better than 40% against the Bobcats. But the Phoenix only attempted 16 layups or dunks while all 49 other attempts came from farther away.

Eight games into the season, MSU’s defense has begun mixing in more zone schemes to offset team’s familiarity with the Bobcats’ man-to-man style. MSU (5-3) wants opponents to stay outside of the paint and settle for lower percentage opportunities. The Bobcats host South Dakota State (6-4) at 8 p.m. Thursday at Worthington Arena and plan to stick to the same formula.

Sprinkle has noticed his players adjusting to new information quicker than he anticipated, especially since he’s a first-year head coach, which has allowed for the integration of different styles.

“Our basketball IQ on the team, and obviously starting with (senior point guard) Harald Frey, has been pretty high,” Sprinkle said. “But we’re going to have to continue to change defenses.”

So far, there have been varying reasons for the variety of schemes. While playing four games in five days in mid-November, going to zone reduced the wear on players’ legs. The Bobcats used a rotation of seven players for the majority of that road trip so attempts to avoid fatigue partially dictated the tactics.

In the final game of that stretch at Grand Canyon, MSU switched to zone early in the second half. Sprinkle said that’s what kept his team in the game before a 19-0 GCU run made the difference in the final seven minutes. The Bobcats risked falling behind earlier on but took a six-point lead because of its defensive adjustment.

Though they tired late, they forced the Antelopes to shoot from the perimeter and rebounded effectively out of the zone.

“Just to give teams different looks, throw them off,” redshirt junior Devin Kirby said. “If we go zone a couple possessions, man a couple possessions, it slows them down. Just burns more time on the shot clock and everything like that. Just to keep the offense on their toes and to mix it up on the defensive end.”

At halftime against Division II Colorado Christian, MSU led by two points. In the locker room, the team discussed the need to stick to what Kirby called “that shell type defense” in which the Bobcats keep opponents in front of them and contest shots.

The Cougars built their offense around off-ball cuts and movement that MSU wasn’t used to. With two minutes left in the first half, the Bobcats switched to zone and Elijah Oliver missed a corner 3. They continued playing zone to start the second half and went on a 16-2 run that featured five CCU missed jump shots.

“The biggest part is just adjusting to who we’re playing, adjusting to their style of play and guarding them accordingly,” senior Ladan Ricketts said. “But we have our principles and for the most part we stick to them and play to our strengths and play the game that we want to play.”

Early in the contest against Green Bay, MSU incorporated a 1-3-1 zone that morphed into a 2-3 look. Josh McNair found open space along the Bobcats’ back line and slammed an alley-oop dunk on the Phoenix’s fourth possession of the game. Shortly after, though, PJ Pipes traveled while surrounded by defenders.

Later in the first half, with the Bobcats playing 1-3-1, MSU’s Mychael Paulo poked the ball away from Hunter Crist, Frey grabbed it and Amin Adamu scored a transition layup on the other end.

But more frequently, the Phoenix pushed the ball so fast the Bobcats didn’t have a chance to set up their defense, regardless of what it was.

“We just kind of ran into a buzz saw,” Sprinkle said, “but we got to get back to our defensive principles this Thursday, and we just got to do a better job contesting shots and rebounding.”

After back-to-back missed free throws, Jubrile Belo missed a box out. He lunged forward for a defensive rebound along the sideline. Instead of…