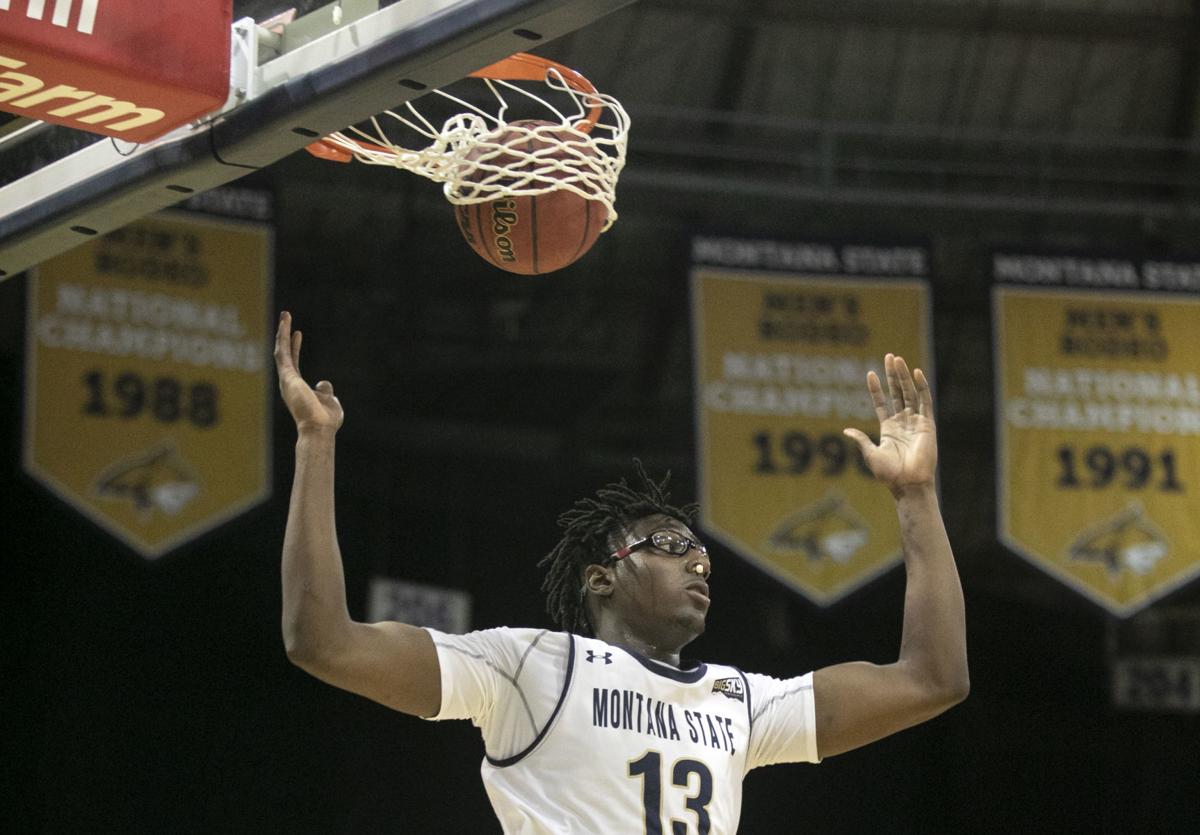 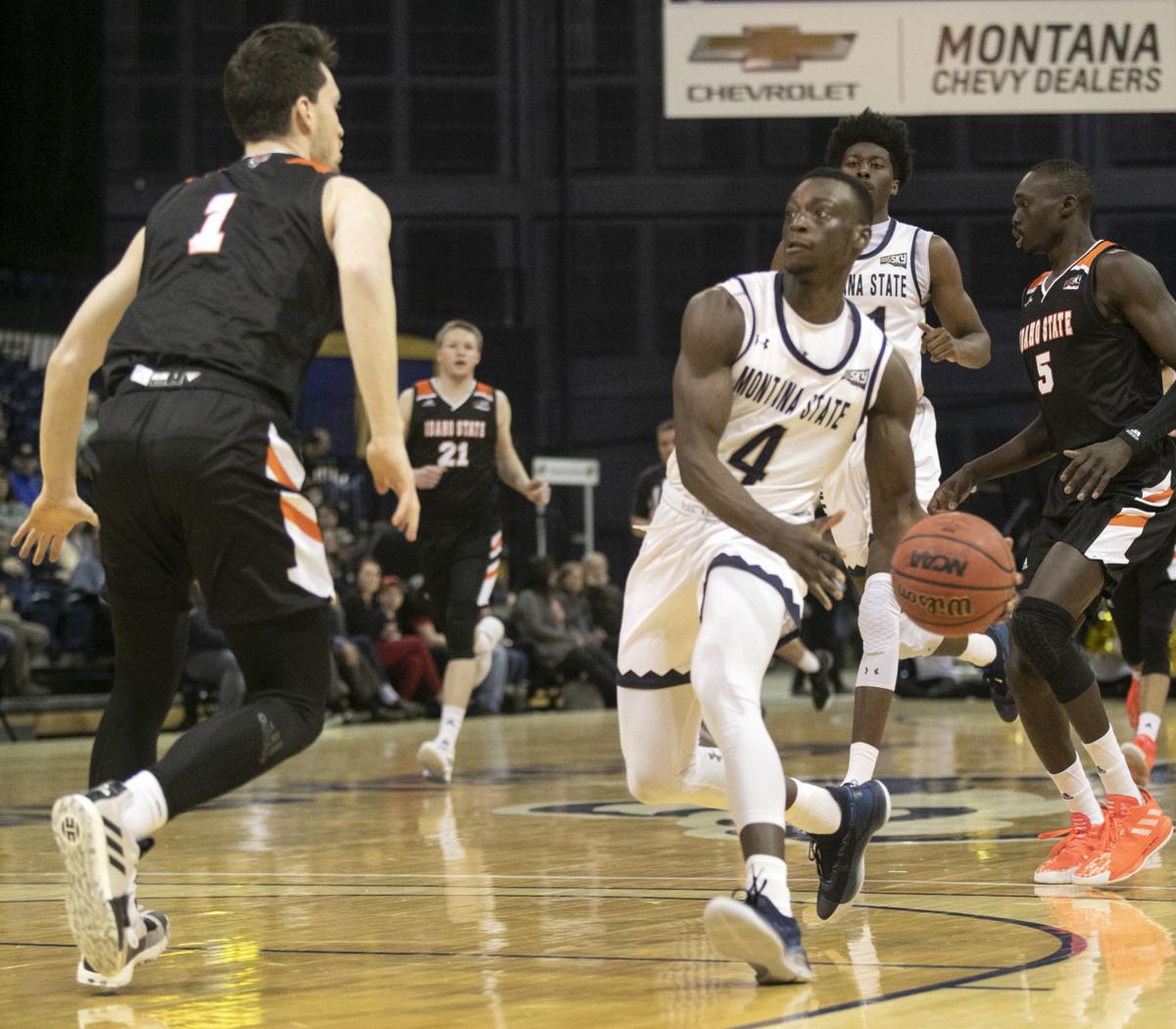 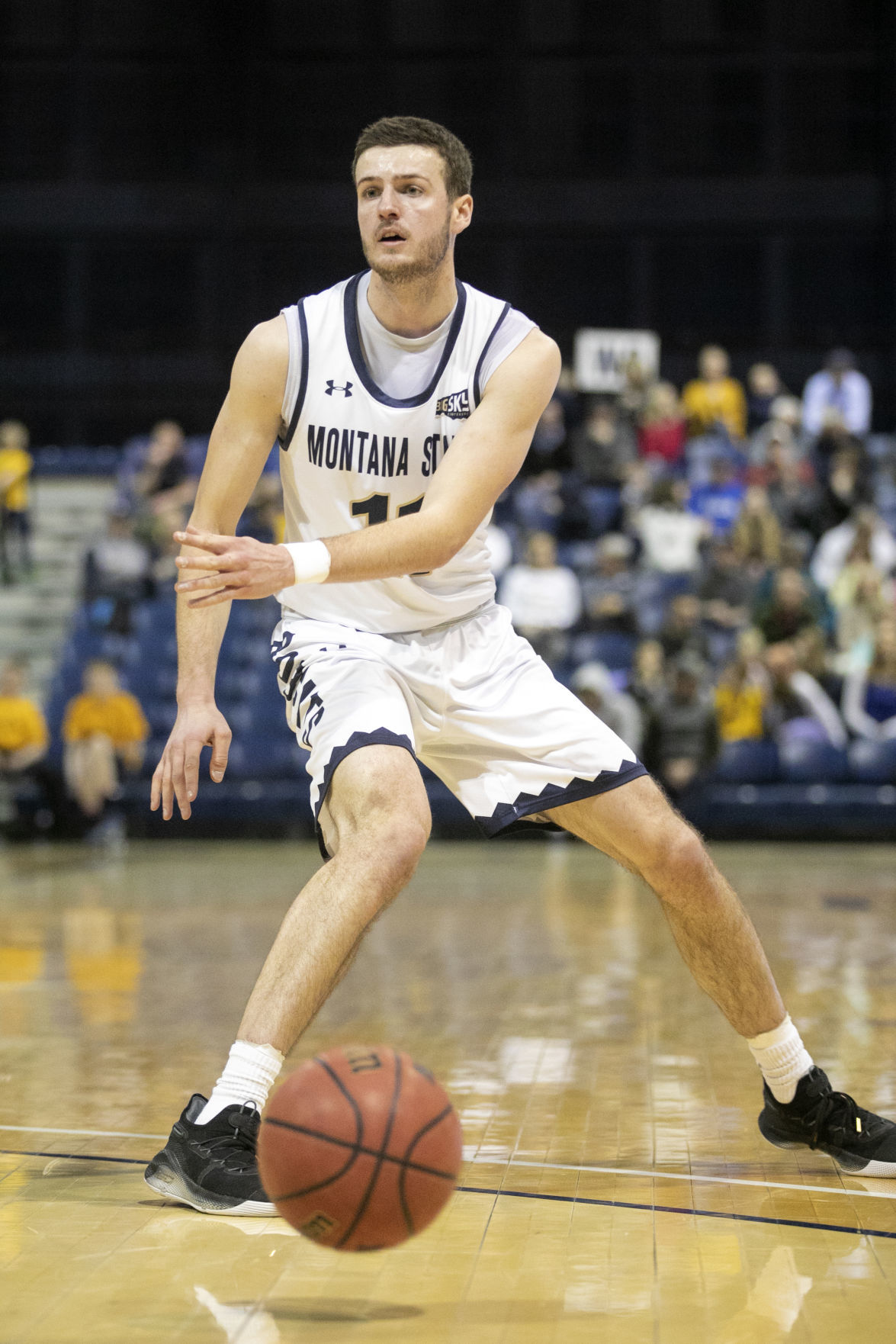 Montana State senior Ladan Ricketts passes the ball to a teammate against Idaho State on Thursday at Worthington Arena. 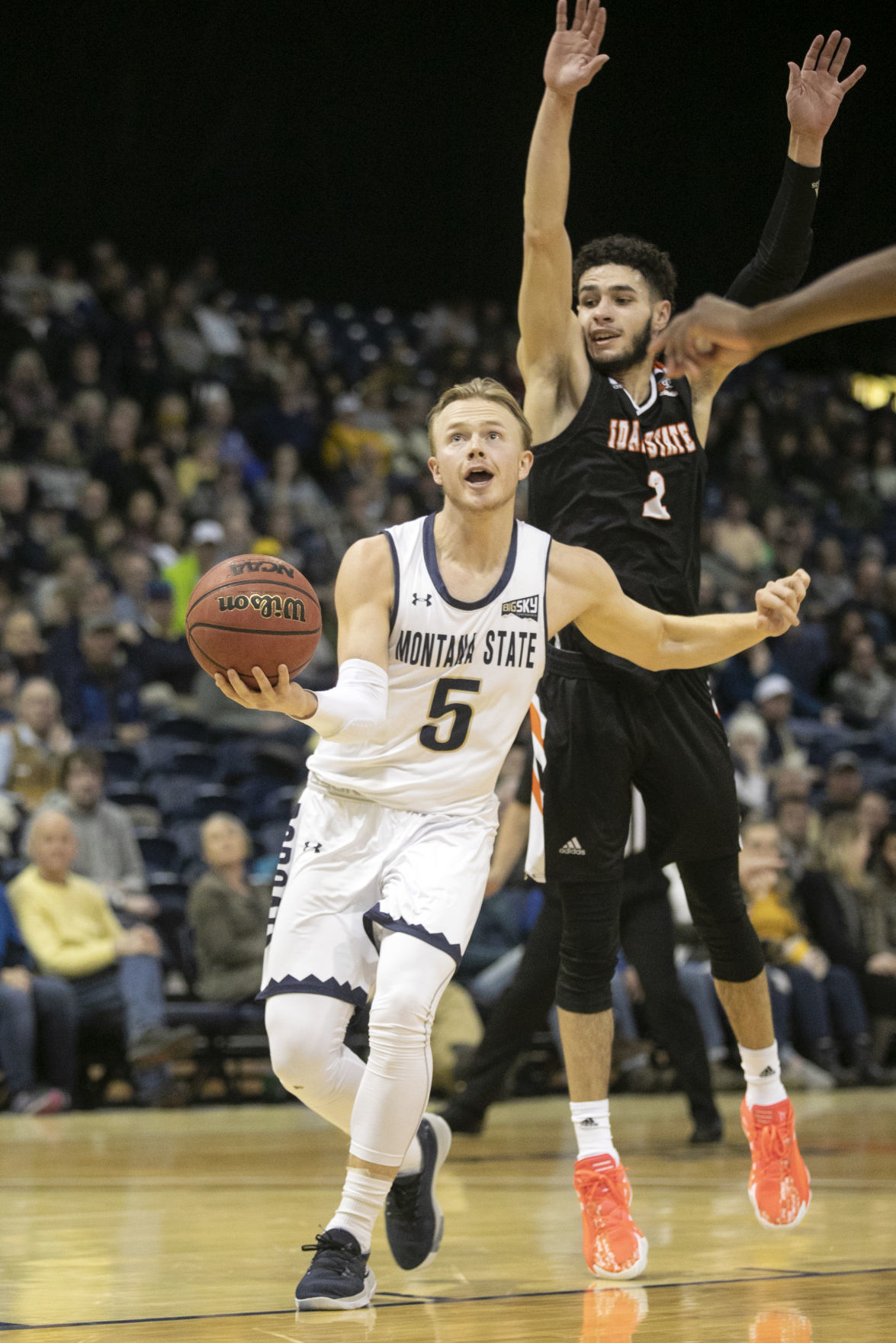 Montana State senior Harald Frey gets past a defender for an underhanded layup against Idaho State on Thursday at Worthington Arena.

Borja Fernandez held the ball along the baseline. No time ticked off in the game, but internal clocks throughout Worthington Arena expired simultaneously as mental counts to five all happened at once.

MSU clung to a three-point lead in the final 22 seconds. After the timeout, Fernandez made good on his extra opportunity. He launched a pass down the court to Amin Adamu, who drew a foul and sunk two free throws to effectively seal the 73-69 win. The Bengals never came within one possession again.

“We just responded like we’ve always responded when they had their chance,” Adamu said.

The Bobcats (13-11, 7-6 Big Sky) nearly blew an 18-point lead with 17 minutes left. Despite their second-half slide, they held on by just enough. They battled potential injuries, foul trouble and 19 turnovers. Whether the issues were self-inflicted or not, MSU still found a way Thursday night in front of 3,028 at Worthington Arena.

ISU (6-17, 3-11) dropped its ninth straight game. In seven of those losses, the Bengals have led, been tied or were within one possession in the final minute of regulation. They met that standard once again, but the Bobcats made just enough plays down the stretch.

“Every time we had a setback, we kept coming back,” MSU’s Harald Frey said. “That’s the character of a winning team.”

MSU opened its lead by feeding the ball inside. Jubrile Belo, who finished with 18 points, slammed dunk after dunk. The Bobcats scored 38 points in the paint and won the rebounding battle 37-29.

When these teams played on Jan. 25, MSU stormed ahead in the final eight minutes in large part due to the performance of the 6-foot-9 Belo and 6-foot-11 Devin Kirby. They picked up where they left off as Kirby scored 10 points and grabbed eight rebounds, helping the Bobcats establish both their presence inside and their advantage on the scoreboard.

After MSU built a double-digit lead, ISU began chipping away. And the Bobcats dealt with their own issues, too. In the final seconds of the first half, Ladan Ricketts collided with the Bengals’ Jared Stutzman and bled from his head. He returned to the court during warmups at halftime wearing a new jersey with No. 21 on it instead of his usual No. 11.

With 12 minutes left, Frey hit the floor hard and laid down on the court for several seconds as the crowd came to a hush and athletic trainer Brett Ritter rushed out to aid him. Frey walked to the bench on his own and returned a minute and a half later, but only after MSU missed a shot, committed two turnovers and allowed four points.

Frey finished with 17 points, six assists and five rebounds while Ricketts made two 3-pointers and scored eight points in the second half. The Bobcats’ two seniors weren’t deterred by the byproducts of a physical contest, and their teammates came through.

MSU was still forced to mix its lineups, though, as Belo fouled out with 43 seconds remaining and Ricketts fouled out with 20 seconds left. Frey and Adamu finished with four fouls each.

In the final 16:40, the Bengals outscored the Bobcats 38-24. MSU committed 12 turnovers in the second half, which allowed ISU to climb back into the game.

After the Bobcats grabbed a defensive rebound with 41 seconds left, Ricketts missed a 3 just six seconds later instead of burning more time off the clock. Along the sideline, Sprinkle said “What is he doing?” when Ricketts shot. The Bengals made it a one-possession game on their ensuing trip down the court.

Even when the final buzzer sounded, Sprinkle slammed a towel into the scorer’s table.

“I’m glad the game’s only 40 minutes long,” Sprinkle said. “I didn’t want to play any longer.”

After a 25-point blowout loss Saturday at Eastern Washington, Adamu pulled Sprinkle aside before the head coach even addressed the team in the locker room. Adamu apologized for his play, which featured a 1-of-11 shooting performance, and asked Sprinkle to coach him hard in practice this week.

Adamu made 5 of 6 free throws in the final 20 seconds. He scored 20 points on 7-of-10 shooting. He grabbed seven rebounds, including a crucial one with 12 seconds left.

Once again, MSU showed its resilience.

“Tonight was such a roller coaster,” Sprinkle said.

Back from injury, Devin Kirby returns to difference-maker for MSU men

Since Devin Kirby returned for Montana State, he's averaged 6.2 rebounds and 5.7 points in 25.5 minutes and the Bobcats are 4-2.