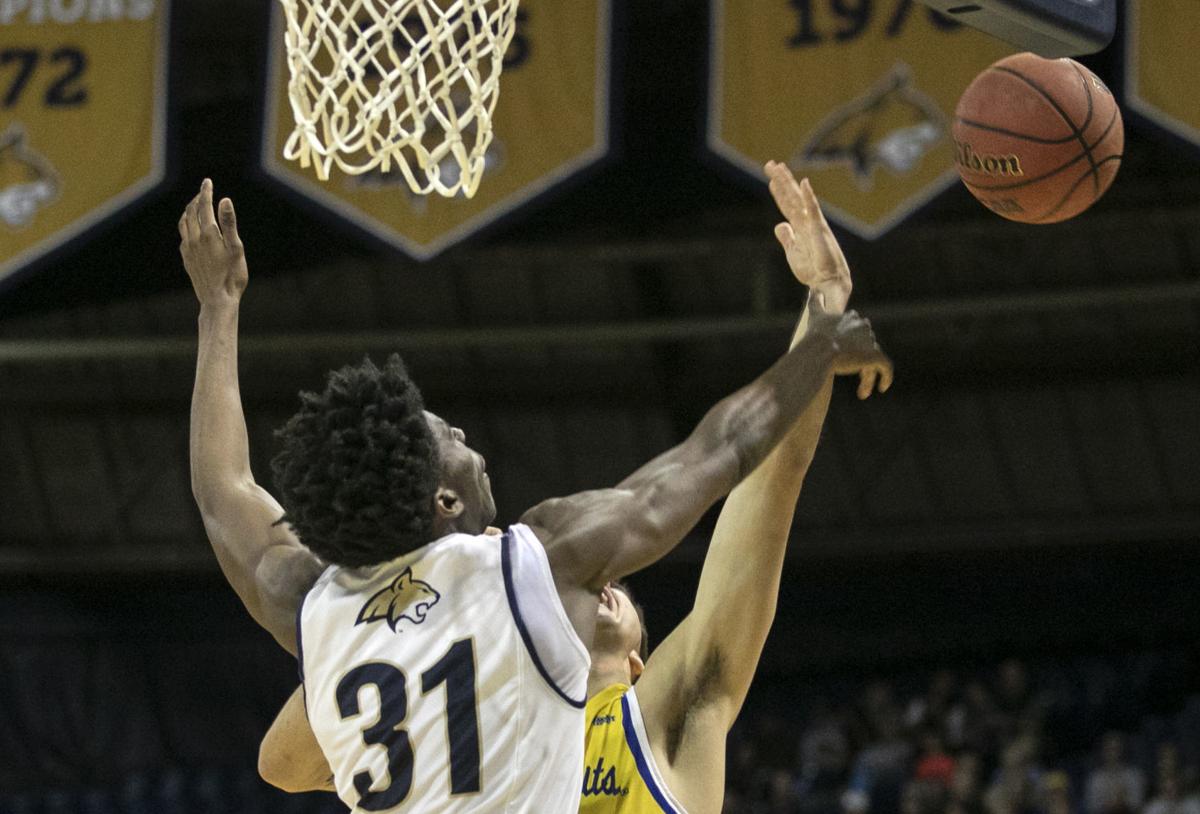 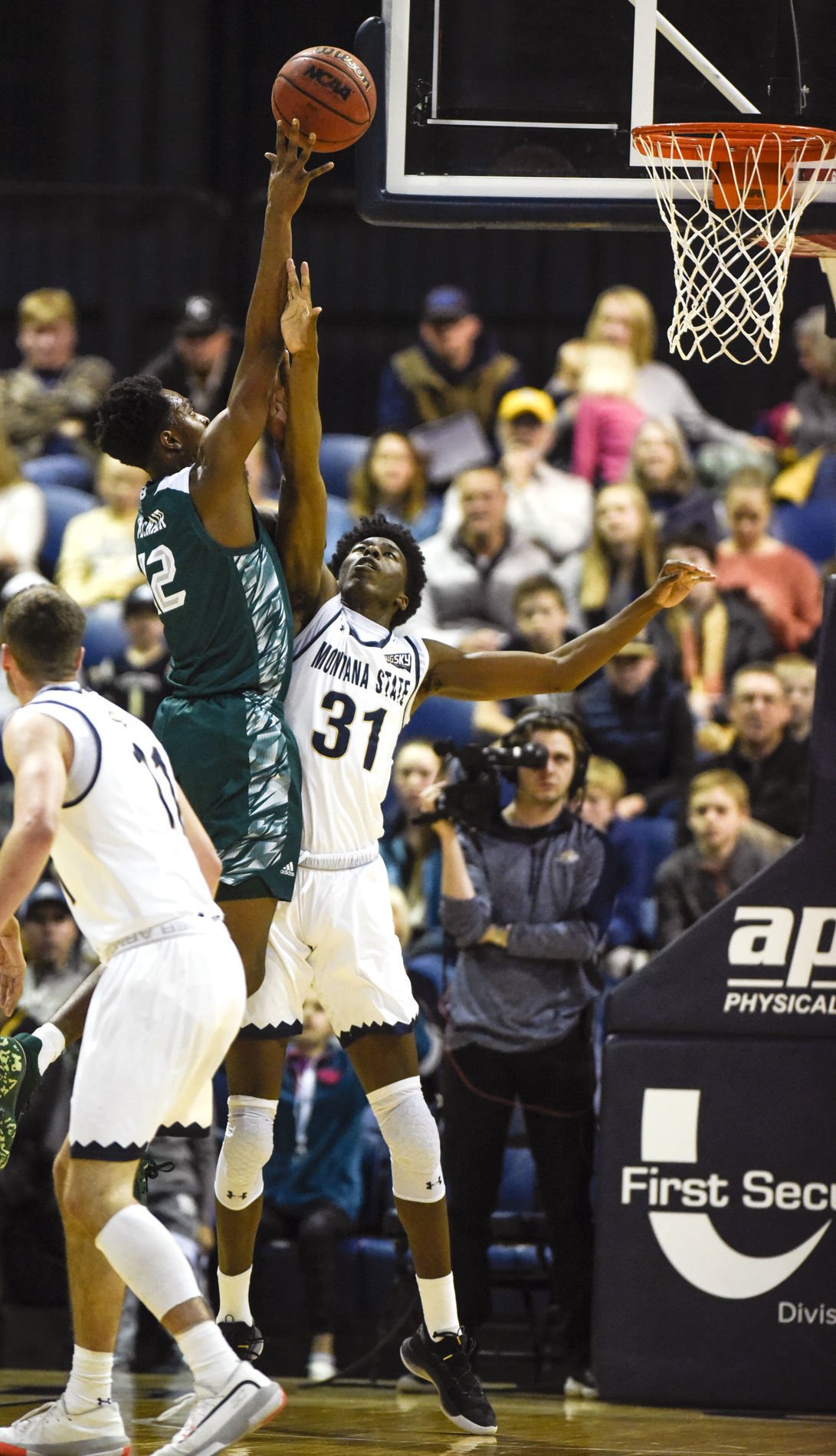 Every time Douglas Wilson caught the ball in the short corner, Montana State was desperate to force the ball out of his hands. South Dakota State’s forward wreaked havoc on prior opponents, and MSU didn’t want to fall victim to the same.

So the Bobcats sent a double team to Wilson over and over. They wanted other Jackrabbits to have to beat them. They assigned Devin Kirby to defend Wilson and trusted him to win the matchup in Thursday’s 77-70 victory.

Wilson recorded 16 points and nine rebounds, but only four points came in the second half on 2-of-5 shooting. Kirby showed what he can provide MSU on the defensive end, limiting Wilson and grabbing a career-high 15 rebounds. The Bobcats improved to 6-3 and again used their defense to make the difference.

“The whole key to the game was how DK rebounded the ball,” MSU head coach Danny Sprinkle said.

Kirby leads the Bobcats with 6.8 rebounds per game and is averaging 27.9 minutes, second most on the team. As one of just three returning contributors from a year ago, MSU has relied on Kirby to set an example for teammates. After playing 17 and 20 minutes in the first two games of the year, respectively, he’s played less than 30 just once.

Before the season, Sprinkle complimented Kirby for how he communicates with teammates. He’s grabbed 34 rebounds in the past three games. As the Bobcats’ season progresses, and roles continue to be defined in nonconference play, Kirby has solidified himself as one of the most important in the rotation.

“Defensively, he’s our best talker. He gets everybody in the right spots. He’s got great energy,” Sprinkle said in October. “That’s something I need to spread throughout the rest of the team. Once that does, that’s where I want to get this program to is where I have 15 guys like DK talking defensively.”

The 6-foot-11 Kirby has started every game this season alongside 6-foot-9 center Jubrile Belo. That’s bumped Kirby to play a little farther from the basket than he’s used to, although the two have effectively controlled the interior.

Sprinkle has said he’s “not married to that lineup,” but so far it’s yielded success. Belo, a sophomore who transferred from Lamar Community College, is averaging 11.4 points and 5.1 rebounds. He blocked four shots against the Jackrabbits.

So regardless of the limitations to MSU’s offensive spacing of playing two natural centers, Sprinkle has prioritized playing time for those who defend and rebound well.

“We got to control what we can do,” senior point guard Harald Frey said. “That’s our effort, our defense, our rebounding, our talk. And then the rest will fall into place.”

To defend Wilson, the Bobcats avoided fouling him and he only attempted three free throws. They wanted to use their length and athleticism to challenge him to shoot over them and occasionally brought the double team. Kirby tried to be as active as possible to disrupt Wilson’s rhythm.

Wilson’s only two second-half baskets came when MSU’s defense was scrambling after a teammate’s drive and following his own offensive rebound. With two minutes left, he posted up on Kirby, drew a double team, dribbled to the outside and missed a 3-pointer that would have given SDSU the lead.

The 6-7, 200-pound Wilson was the National Junior College Athletic Association player of the year in 2018-19, and Sprinkle called him one of the best players MSU will face all season.

“My job was just to make it tough on him for all of us, all our 4s and 5s and our bigs,” Kirby said. “Just to try to contain him as much as possible.”

With 49 seconds left, SDSU called timeout trailing by two. The Bobcats had the ball with a chance to make it a two-possession game. Sprinkle subbed in Belo and Mychael Paulo to have his best free-throw shooters on the floor in case the Jackrabbits were forced to foul.

So Kirby subbed out, and Paulo hit two crucial shots in the final seconds to seal the win. But by then, Kirby already proved his value. And like Frey predicted, everything fell in place.

“That’s just my role on this team,” Kirby said, “just to defend and rebound to try to give us as many as second-chance opportunities that I can.”

The first time Devin Kirby played with Jubrile Belo, during an open gym in the summer, he immediately knew the junior college transfer could c…