A man yells during an MSU men’s basketball game against Sacramento State on Feb. 19, 2017, at Worthington Arena. 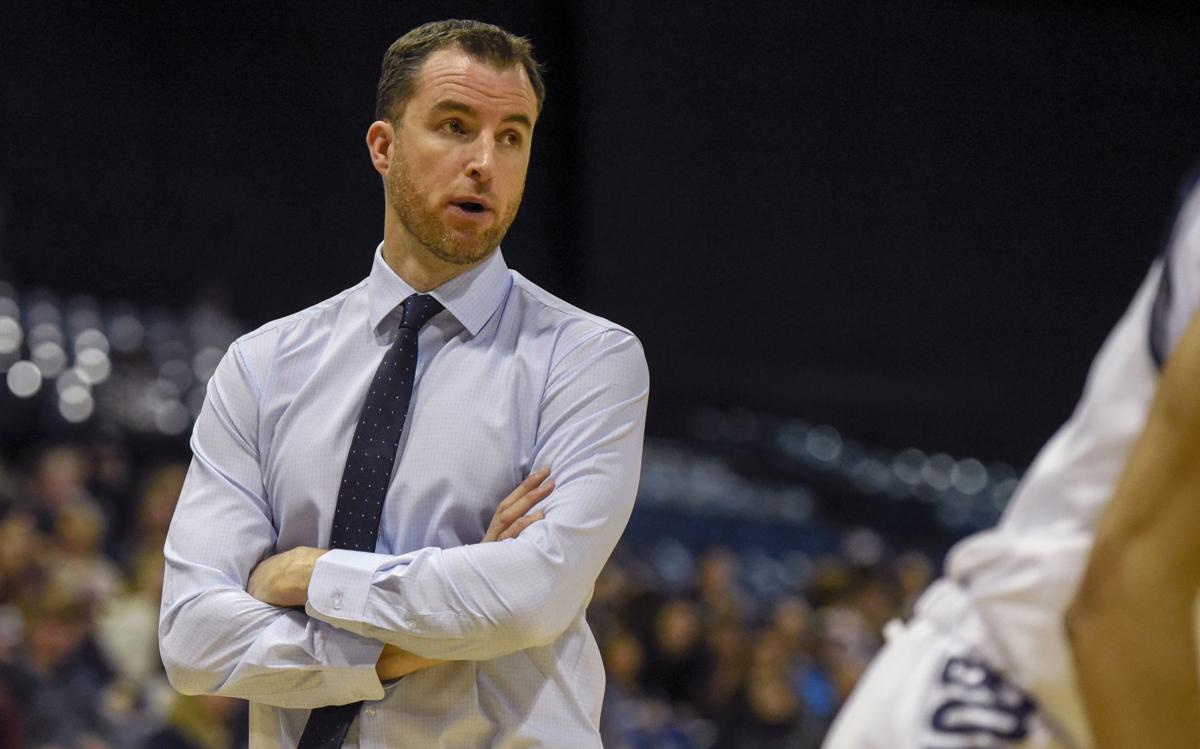 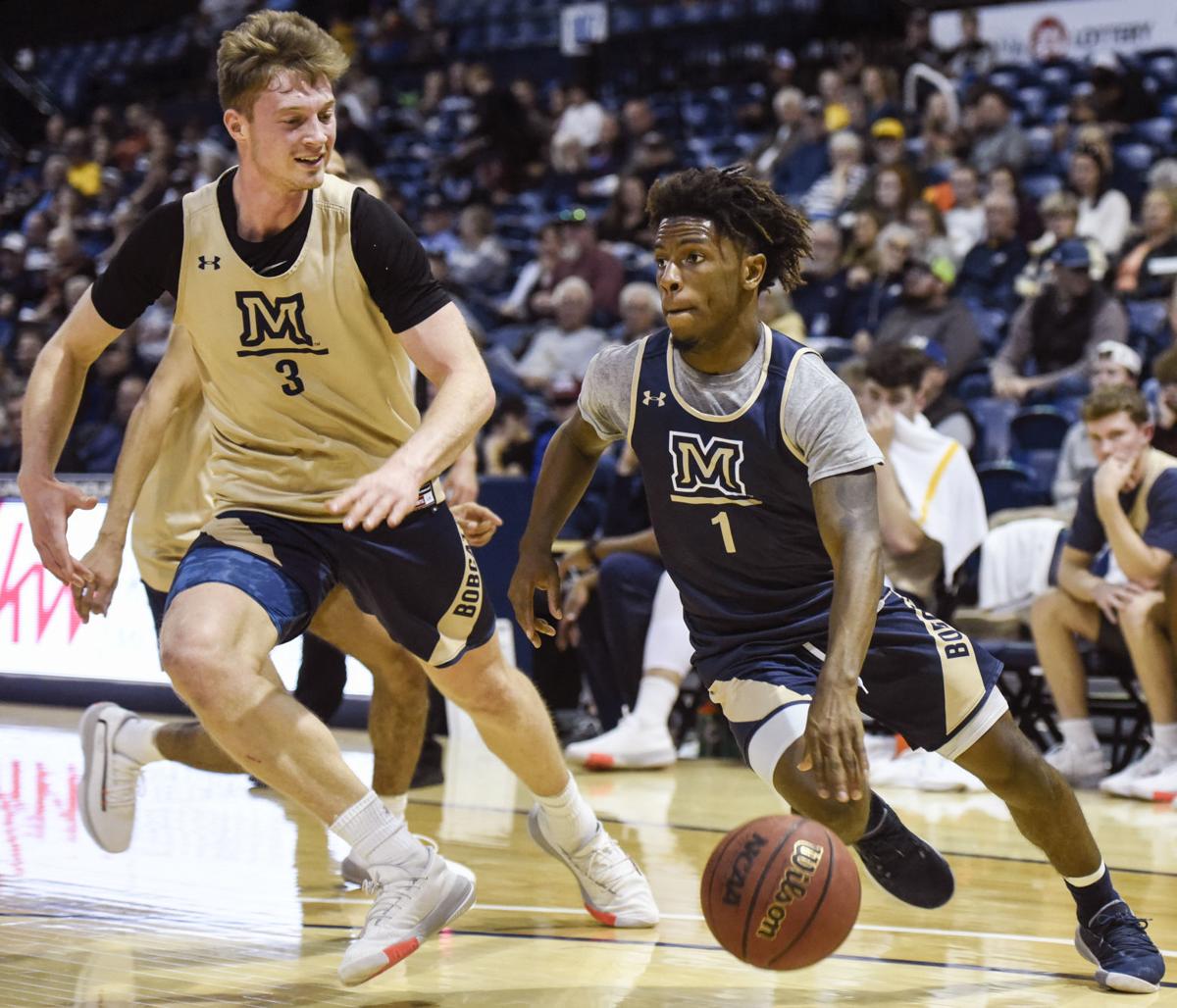 Montana State's Xavier Bishop works against Finn Fleute during an open scrimmage at Worthington Arena as part of MSU's inaugural "Late Night at the Brick" on Oct. 18.

Nine minutes into his opening statement at his public introduction on his first day as Montana State’s head coach, Danny Sprinkle established a key priority.

He shouted out Bethany Cordell, the Bobcats’ associate AD for marketing.

“You’re going to get tired of me,” Sprinkle said. “I’m telling you right now.”

It was one of Cordell’s favorite days of her entire career. The theme of Sprinkle’s introduction in April was reinvigorating MSU’s men’s basketball program, and Cordell appreciated that Sprinkle was cognizant it required more than just an improvement in play.

When interviewing for the job in the spring, Sprinkle made a point of that. Since his hiring, he and the athletic department have put an emphasis on increasing marketing, attendance and energizing a fan base that experienced growing lethargy throughout the past several years as the team has finished above .500 only once since 2003-04.

“We got to get butts in the seats at Brick Breeden again, and we need to make it the toughest atmosphere to play in in the Big Sky,” Sprinkle said in April before pausing for applause. “I’m going to be out on campus. If you see me, grab me. Say hello. Do whatever. Stop by my office. I don’t care who it is. Stop by my office.”

Through seven games this year, the Bobcats are 5-2. They’ve played two home games, against two non-Division I teams, and averaged 2,636 fans, only 166 people below last season’s average. They host Green Bay, their first D-I opponent, at 6 p.m. Saturday at Worthington Arena.

In September, the program announced it had already sold about 200 more season tickets compared to the prior year. Cordell recently said MSU already has “significantly higher” season ticket sales this year compared to the end of the season last year, and sales usually continue into the start of conference play in late December.

To reach this point, Sprinkle has embraced the grassroots style of campaigning that Cordell believes is vital in a community like Bozeman’s, and the commitment to increasing attendance at men’s basketball games has been embraced by MSU’s athletic department.

“He’s really getting out there and building that relationship,” Cordell said. “His energy is contagious, and it is super enthusiastic with the team and it starts from the top down. Having a coach that buys in to your marketing ideas and goes out and helps execute them is an absolute game changer.”

On that first day after the press conference, Cordell walked with Sprinkle to the Strand Union Building, and she said it took 20 minutes to travel 75 yards because he stopped and introduced himself to whoever walked by.

Later that week, Cordell proposed handing out sprinkle donuts to students on campus so the new head coach could continue introducing himself.

Sprinkle has mentioned repeatedly he wants to connect with the entire university, and that starts with greeting people face to face.

“I’m sure he’s so sick of that at this point in his life of getting the sprinkle thing,” Cordell said, “but he’s like, ‘Alright let’s do it.’”

Earlier this week, Sprinkle bought coffee for students at the SUB. He met with three fraternities, following through on his plan to interact with Greek houses, which he hopes leads to more fans at games.

Thank you to the gentlemen of Sigma Chi, Pi Kappa Alpha, and Alpha Gamma Rho for welcoming @MSUCoachSprink into your chapter meetings tonight! It’s going to be a great season with your support at our home games... GO CATS! pic.twitter.com/P1yNOibBjY

In June, MSU hosted an event downtown for boosters and more than 200 people attended, athletic director Leon Costello said. Even with the football season upcoming, the Bobcats were generating a buzz around basketball.

“We are going to do things to make sure we market basketball in the right way,” Costello said. “I want to see that in the short-term. I want to see Brick Breeden full.”

For the past few years, Cordell has had the idea of MSU’s men’s and women’s basketball teams pairing up to play back-to-back preseason open scrimmages, but this year was the first time it turned into reality.

On Oct. 18, the Bobcats hosted the inaugural “Late Night at the Brick,” a free event that gave fans a chance to watch both teams play. Cordell estimated about 500-600 attended. She credited Sprinkle and women’s head coach Tricia Binford for cooperating to make the event work and for them being willing to “lend their fan equity.”

Cordell pointed to the women’s team, which was picked to win the Big Sky, as being the epitome of a group that engages the community. While preseason buzz surrounded the men’s program, it’s the women that they’re following.

“To be able to use those two teams together to really have a united front with Bobcat basketball is huge,” Cordell said.

Saturday home game times this season vary between 4, 6 and 7 p.m., another piece of MSU’s attempt to increase attendance. The Bobcats hosted most Saturday games at 2 p.m. in the past, but the athletic department put out a preseason survey to fans to figure out what may work better.

Cordell pointed out that having varied game times creates more options and could appeal to a wider audience that may choose other activities on a Saturday afternoon in a ski town like Bozeman. After the season, she plans to review the data she’s collected and figure out what times worked best.

MSU has also planned to have a staff or faculty member serve as an honorary coach for each home game. On Tuesday, it was Steve Erickson, the school’s director of recreational sports and fitness. Erickson sat on the bench throughout the contest, and the opportunity was another example of the Bobcats going out of their way to reach out to the rest of the university community.

“I have yet to pitch (Sprinkle) an idea that he has said no to,” Cordell said, “which as a marketing person is super awesome because he did truly mean it when he said, ‘I’m never going to say no.’ That’s not always the easiest to get out of coaches.”

Sprinkle added marketing is a program-wide initiative. Players taking pride in it and making an impression on peers is part of the equation, too. Eight months since his hiring, it’s clear Sprinkle’s objectives lie beyond just on-court results.

“The big thing is,” Sprinkle said, “getting people back to the games.”