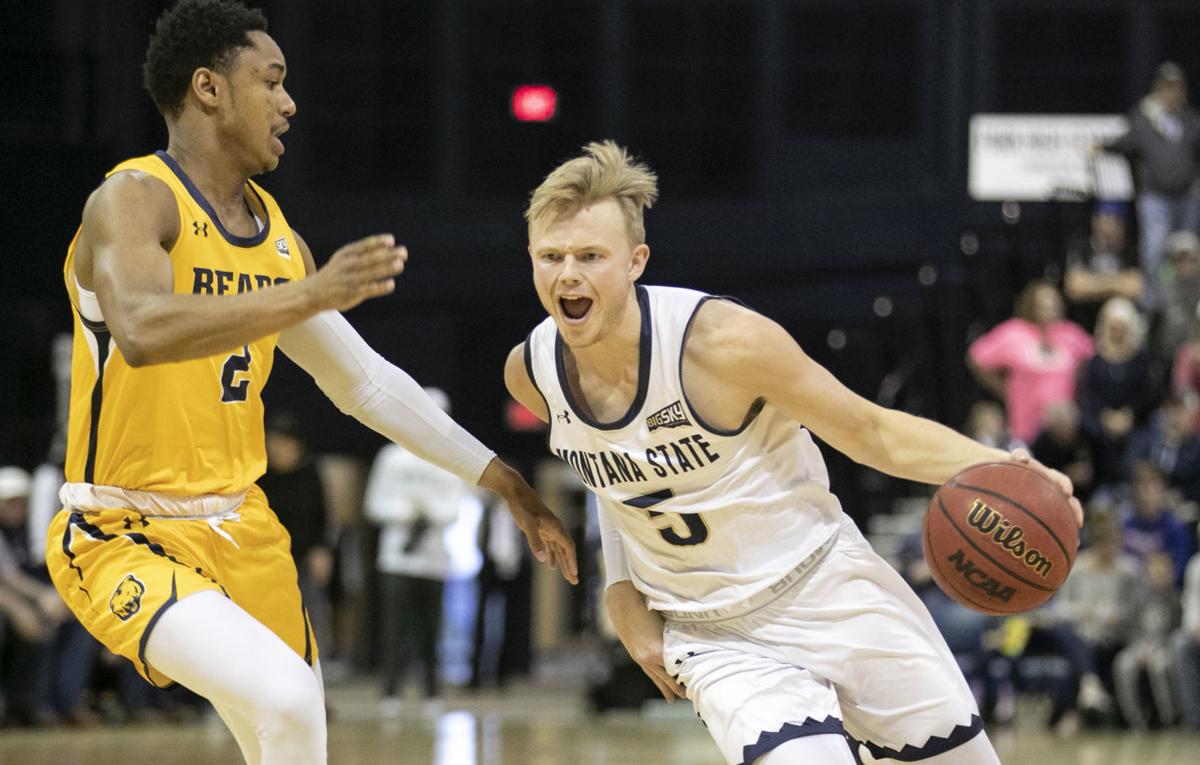 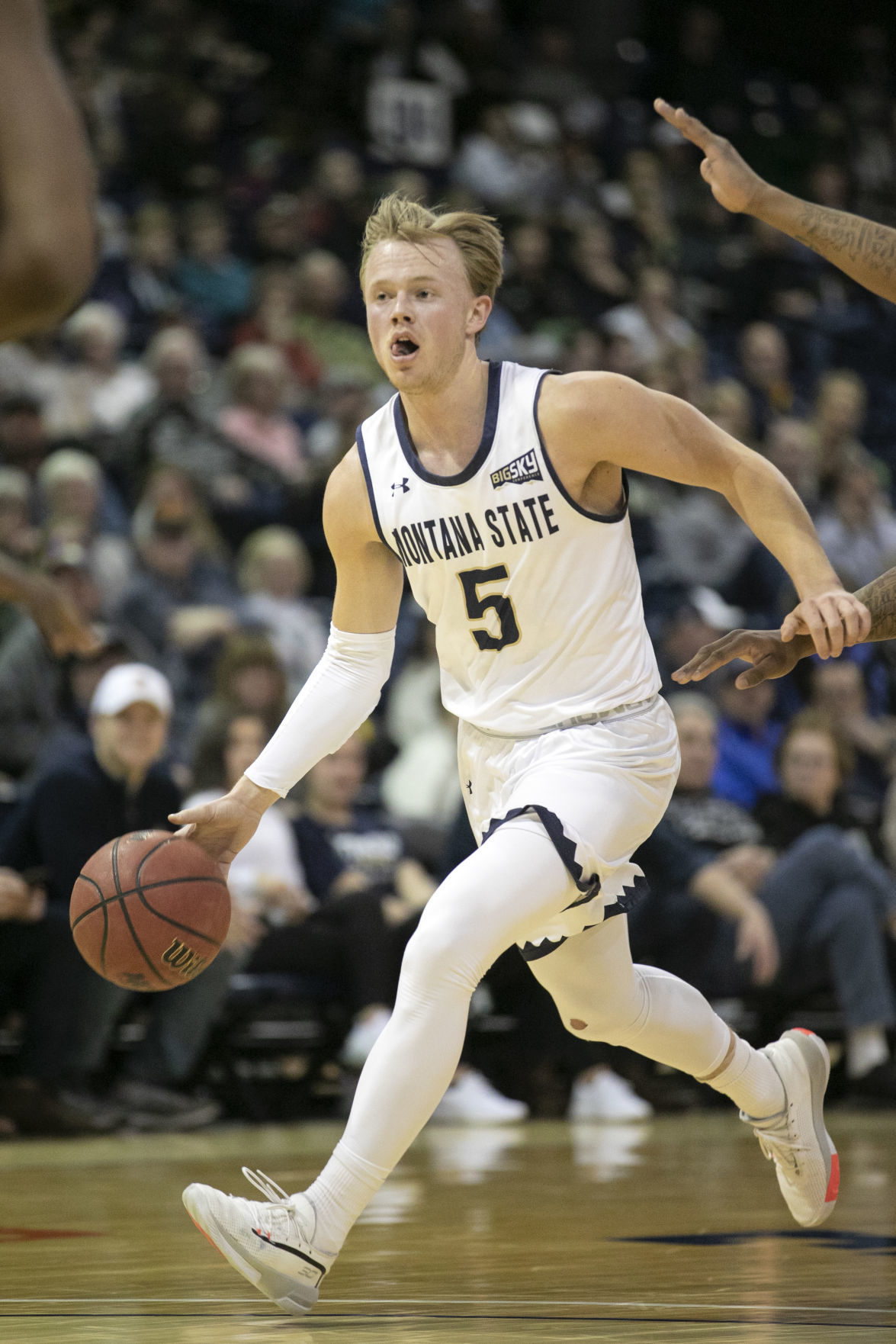 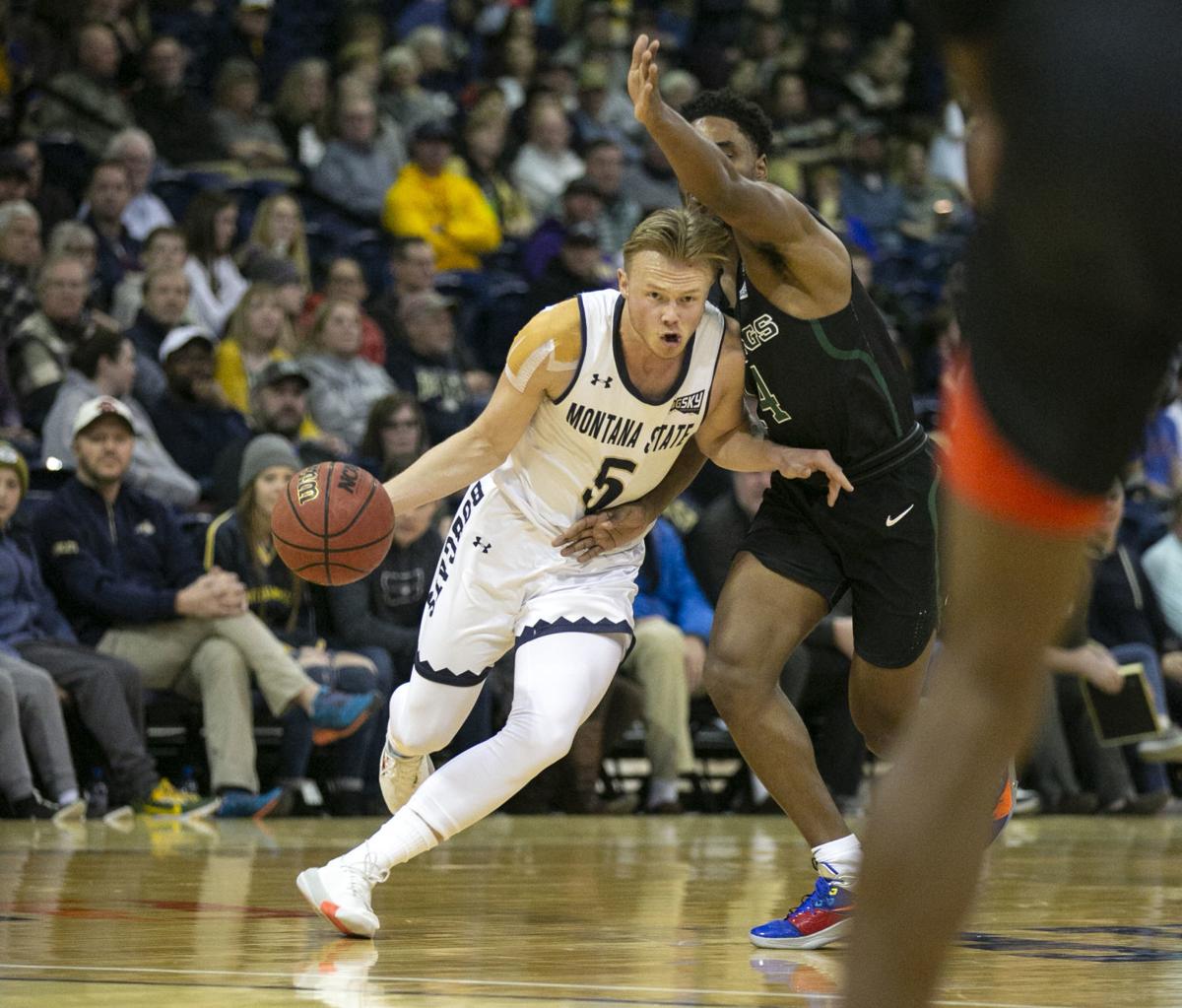 Montana State senior Harald Frey dribbles past a defender during a game against Portland State on Jan. 11 at Worthington Arena. 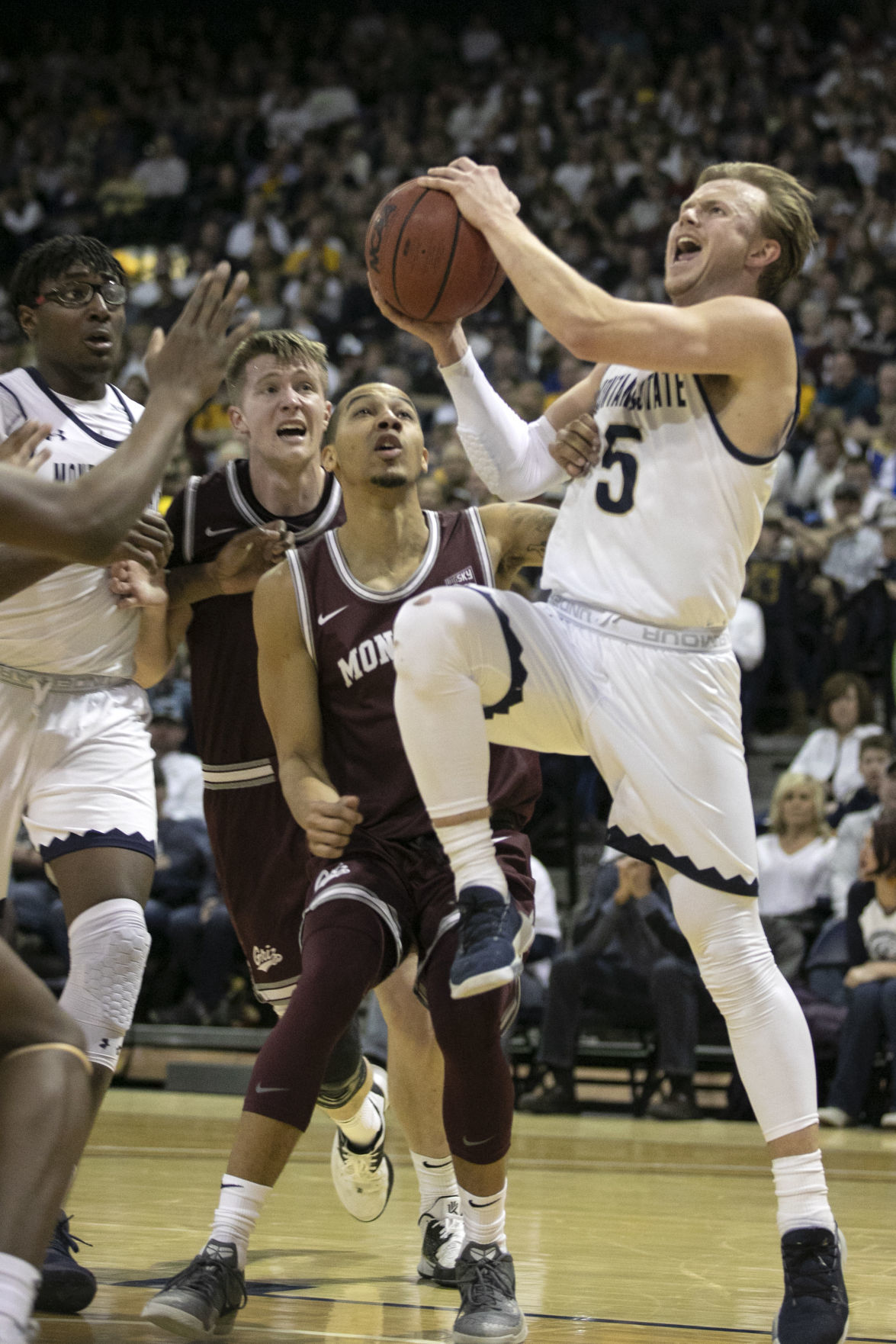 Montana State senior Harald Frey goes for a layup during a game against Montana on Feb. 22 at Worthington Arena. 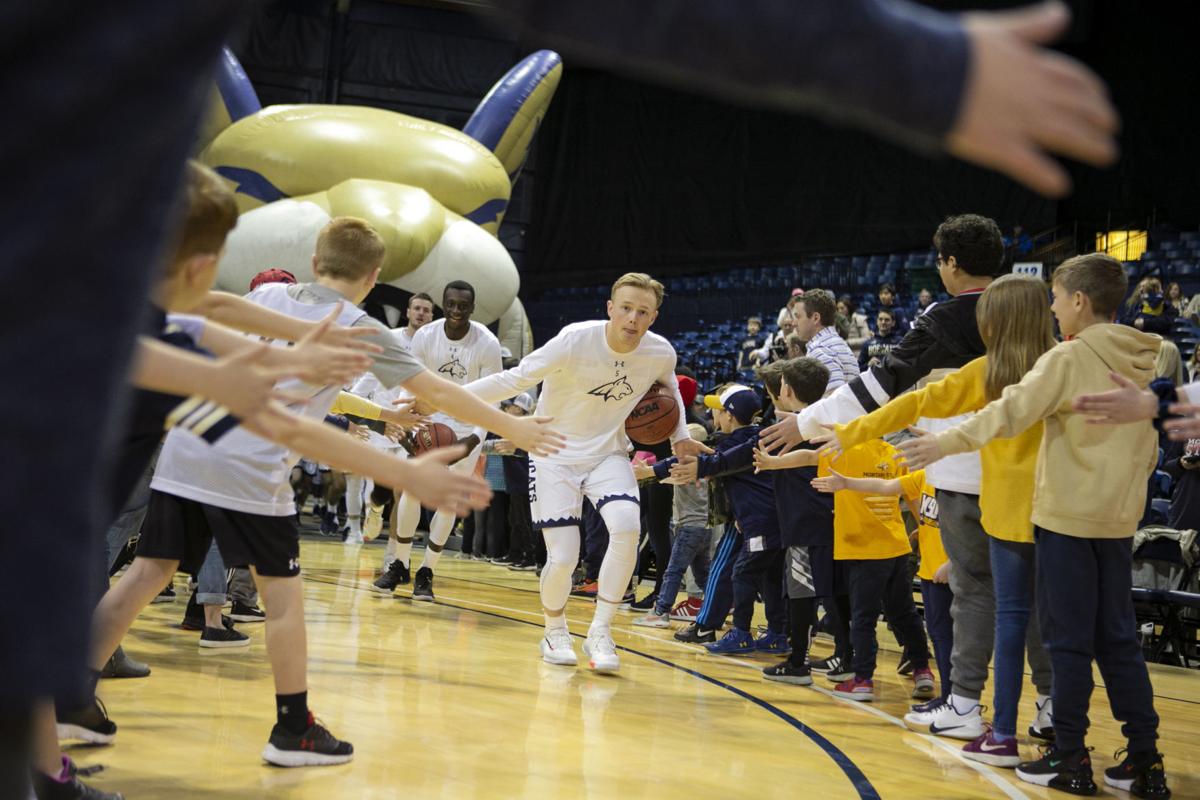 Montana State senior Harald Frey runs out onto the court prior to a game against Sacramento State on Dec. 28 at Worthington Arena. 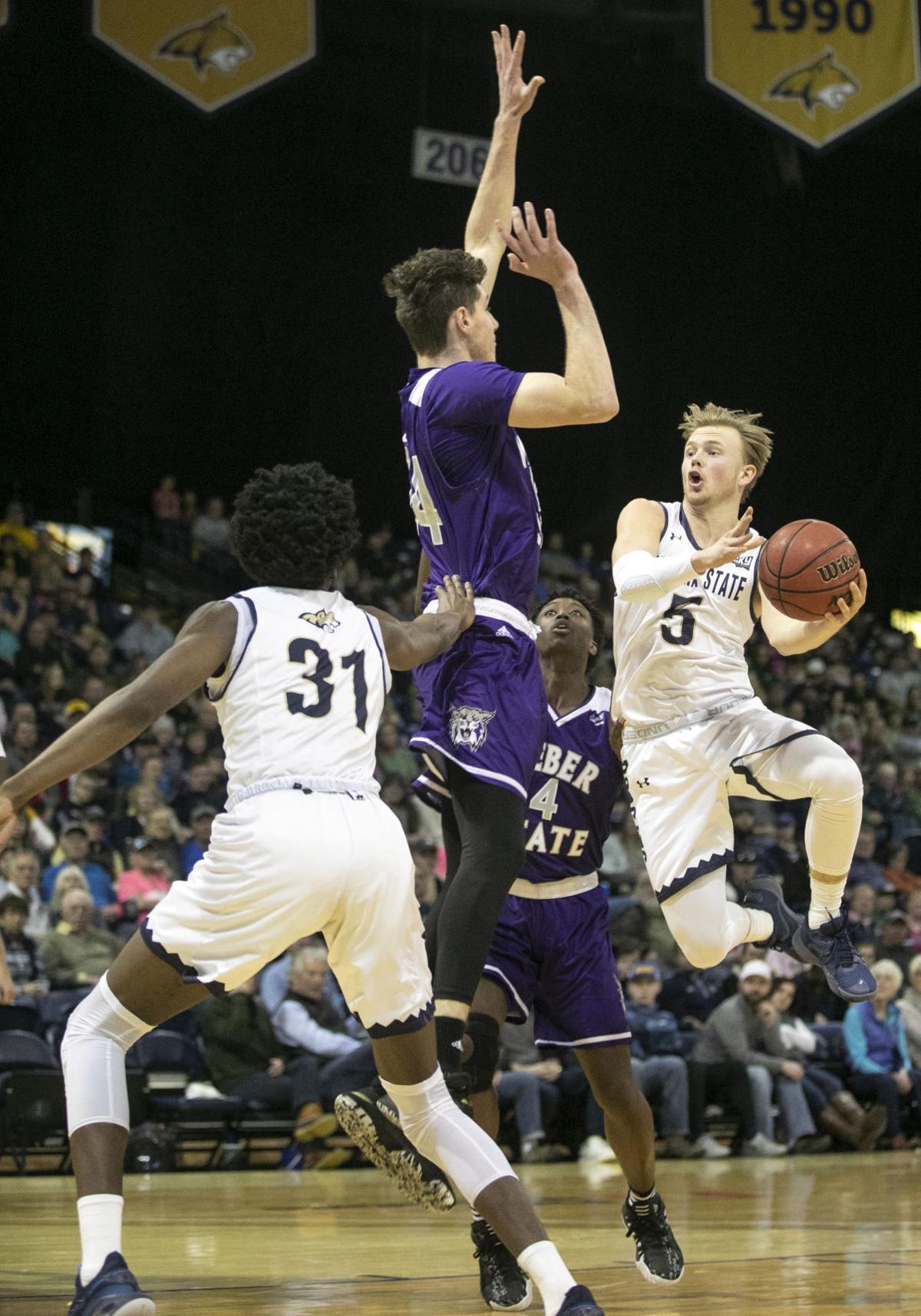 Montana State senior Harald Frey passes the ball while in midair to Devin Kirby against Weber State on Feb. 15 at Worthington Arena.

Danny Sprinkle thrust his foot backward and smashed it into the front of the scorer’s table over and over. He repeatedly slammed his palm down against the top of it. He argued with referees, shouted often and paced along the sideline as Montana State nearly lost control Thursday against Southern Utah.

Then the Bobcats’ first-year head coach looked to Harald Frey, his all-conference senior point guard who calmed him down all season simply with his presence. Frey made play after play, giving Sprinkle no reason to worry.

In the first half, though, Frey only scored two points. Sprinkle’s outbursts were among his most demonstrative of the season. The Bobcats needed to win in order to secure a bye to the conference tournament’s quarterfinals.

Sprinkle presented a challenge to his best player. He wanted Frey to be more aggressive. A couple years earlier, Frey adjusted to taking on more responsibility within the team as his older teammates encouraged him to shoot more.

Frey iced the victory with a 3-pointer nearly from the logo at midcourt, doubling the lead in the final minute. Shot clock winding down, defender in his face, game on the line. None of it mattered. With one fluid motion, Frey put 3,073 fans at Worthington Arena on their feet all at once.

No surprises has come to define Frey’s career. He’s played in every single one of MSU’s contests the past four years. He holds the school record for games played at 127 and has started every one. He’s served as a model of consistency, and MSU will rely on him again in the postseason.

After Frey’s winning shot, the Bobcats reached the 16-win mark for just the second time in 18 seasons. Because of Frey’s steadiness, No. 5 seed MSU (16-15) will square off against No. 4 seed Portland State (18-14) around 2 p.m. Thursday in Boise, Idaho, in the Big Sky tournament quarterfinals.

“I just want to be like Harald Frey when I grow up,” Sprinkle joked.

In his first three seasons, Frey played alongside and was often overshadowed by Tyler Hall, the Bobcats’ and Big Sky’s all-time leading scorer (2,518 points). With Hall since graduated, Frey has spent this season as his team’s unquestioned leader and solely in the spotlight.

He’s averaging 16.6 points and 4.6 assists, ranking seventh and third in the conference in those categories, respectively. Frey ranks third in school history with 1,890 career points and is only the second player in Big Sky history to eclipse 1,825 career points and 500 career assists.

Frey knows he’s at the top of every opponent’s scouting report. He’s the one younger teammates now look up to. They believe whenever he shoots, especially late in games, good things will happen for MSU.

“There’s never been anyone like Tyler so no one really knows how to adjust,” Frey said. “There was definitely an adjustment period. But we got in, watched film, kind of tried to just work on my game, keep progressing as a player and not be satisfied with where I’m at.”

A day after the Bobcats beat Sacramento State on Dec. 28, Sprinkle parked in Brick Breeden Fieldhouse’s empty parking lot and walked into his office at 8:30 a.m. Sprinkle thought he was alone. Until he found Frey.

At first, Sprinkle thought maybe Frey was receiving treatment since the senior had just played 37 minutes and tweaked his ankle in the process mere hours earlier.

Instead, Sprinkle learned Frey came to take extra shots on his own time, trying to gain whatever edge is left to gain. Even on the players’ day off, he went to work. Sprinkle, appreciative of his persistence but also concerned about his health, told Frey to only form shoot and not put any extra stress on his body.

“It never stops for him,” Sprinkle said. “No matter how good he plays, he wants to play better the next night. And he knows teams are gunning for him and he’s got to bring his best every night.”

Assistant coaches Dan Russell and Shawn Dirden have become accustomed to receiving nightly text messages from Frey, who’s asking for help during his 7 a.m. shooting session the next day.

“You’re like ‘Ah, gosh, Harald, can we sleep in a little bit?’ But you love that,” Russell said. “His work ethic is second to none. That is obviously why he is who he is and why he has had the career that he has had here.”

At the start of conference play, Frey began wearing tape on his right shoulder in games. But the lefty managed his body in order to perform to his capabilities. Sprinkle described Frey’s routines as “pre-hab.”

During a Jan. 21 practice, Frey soared for a rebound during a drill designed to practice boxing out. Frey bumped into a teammate and fell to the ground, landing on his right shoulder. He laid on the court momentarily before jumping back to his feet. He tried re-entering the drill when his turn in line circled back around.

Sprinkle had to intervene. “Harald, get out,” he said. Frey obliged, despite wanting to continue. The duo understood the wear and tear Frey’s body had taken. Frey was cognizant he was needed on Thursday evenings and Saturdays rather than Tuesday afternoons in quiet gyms with only his own team on the floor.

Now Frey is needed on a Thursday afternoon and maybe a Friday evening and maybe a Saturday night after that.

“He plays at his own pace all the time,” Sprinkle said. “They’re never going to speed him up. Never going to slow him down. I think our young guys see that.”

Three weeks ago, Frey sprained his left ankle in the second half against PSU. He subbed out and didn’t return, finishing with a career-low 22 minutes. The Bobcats lost by 10 and struggled without him. Uncertainty swirled whether he’d play 45 hours later in his final regular season matchup against rival Montana.

Sprinkle didn’t know Frey would play until about an hour before the game. Frey did whatever he could to recover in time. He didn’t care if he wasn’t 100%. If he could play, he could play. That’s all that mattered to him.

Despite struggling to explode off his feet like he normally does, Frey gutted out 37 minutes. He scored eight points within a late 80-second span, single-handedly keeping the Bobcats close. They ultimately fell short, but Frey displayed his mettle. He limped around the court in the final moments, but only let his pain show during timeouts and stoppages. When it was time to play, he made himself ready.

“At this time of the year, I think no one is 100%,” Frey said. “I think everyone is dealing with something, and the ankle is just what I have to deal with. As long as I can just get it warmed up and ready to go and be on the floor, that’s all I can ask for.”

In the three weeks since the sprain, Frey hasn’t practiced. He often sat in front of the scorer’s table at Worthington Arena and observed his teammates. It’s allowed more practice repetitions for others but also hindered MSU’s game execution, Sprinkle said.

Part of why Frey struggled in the first half against Southern Utah, according to the coach, was because it took time for him to find a rhythm.

“It’s hard to practice because he’s such an integral part of our team,” Sprinkle said. “... It’s tough without your leader and your energy guy.”

Frey was proud of his shot against the Thunderbirds because it helped his team find a way to win. For the last four years, Frey has found a way to remain MSU’s steady rock at point guard.

The one who inspires teammates, relaxes his coach and rises in the brightest moments.

“You want to play in games that matter,” Frey said.

Now, Frey has that chance. After his record 127 straight starts, this postseason will be his final encore.