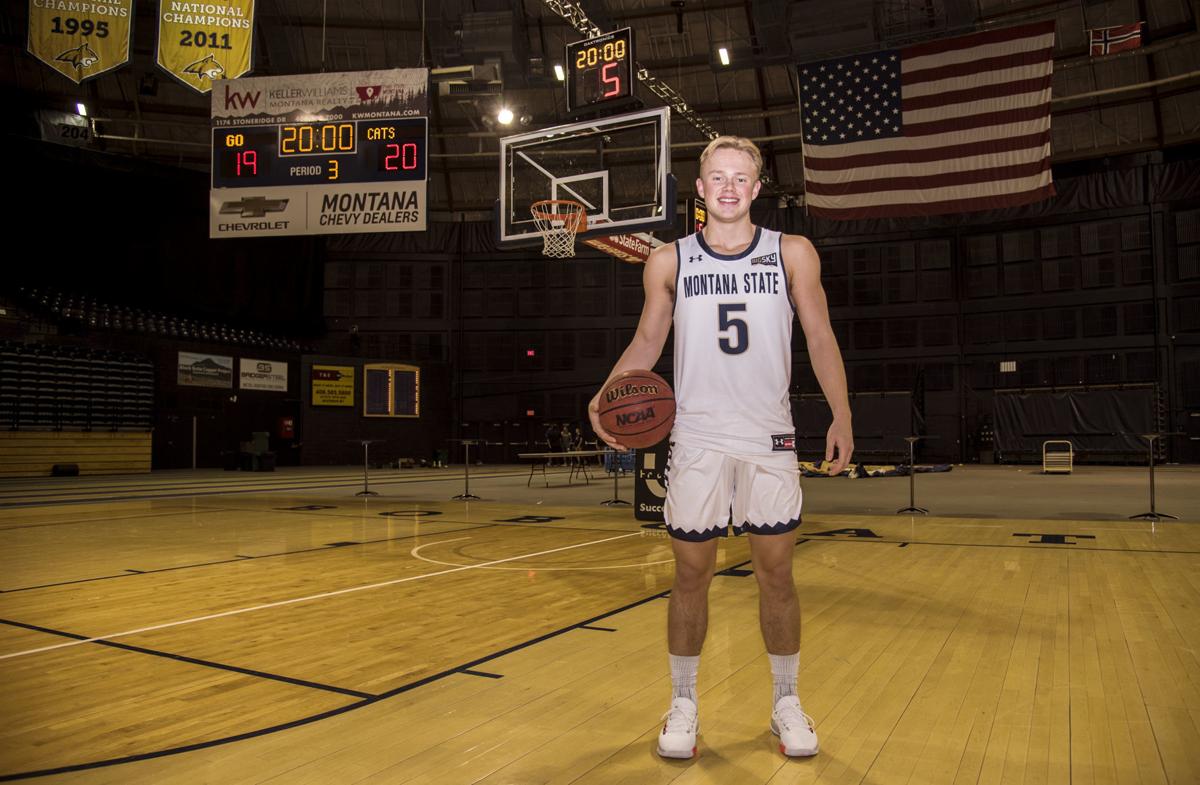 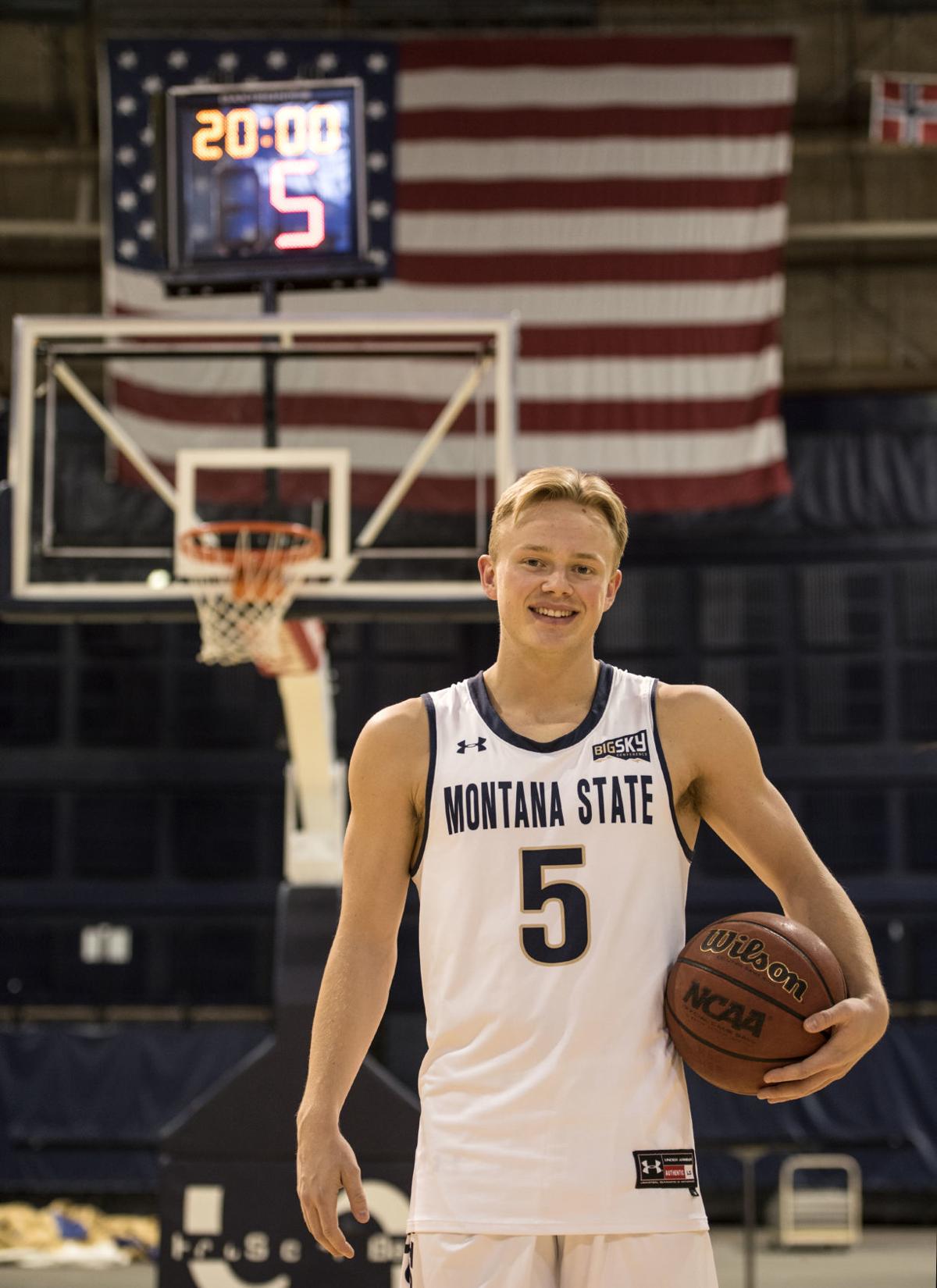 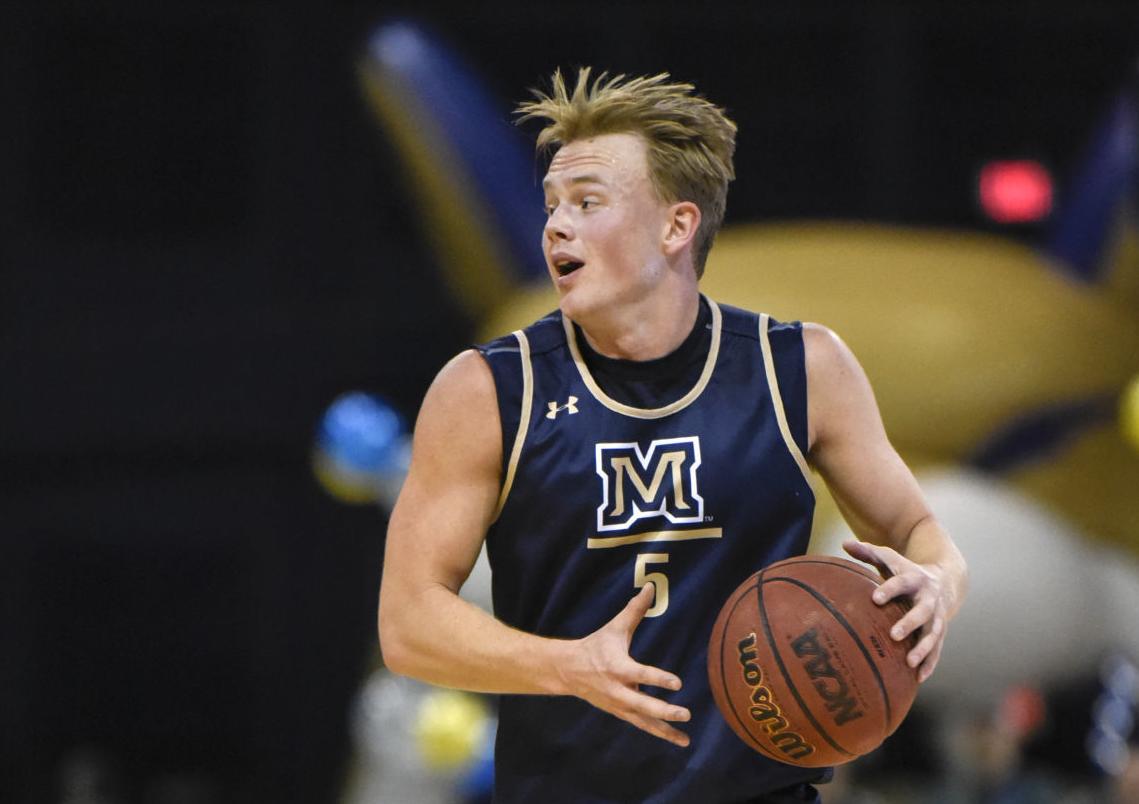 Montana State's Harald Frey looks for a pass during a scrimmage on Oct. 18 at Brick Breeden Fieldhouse. 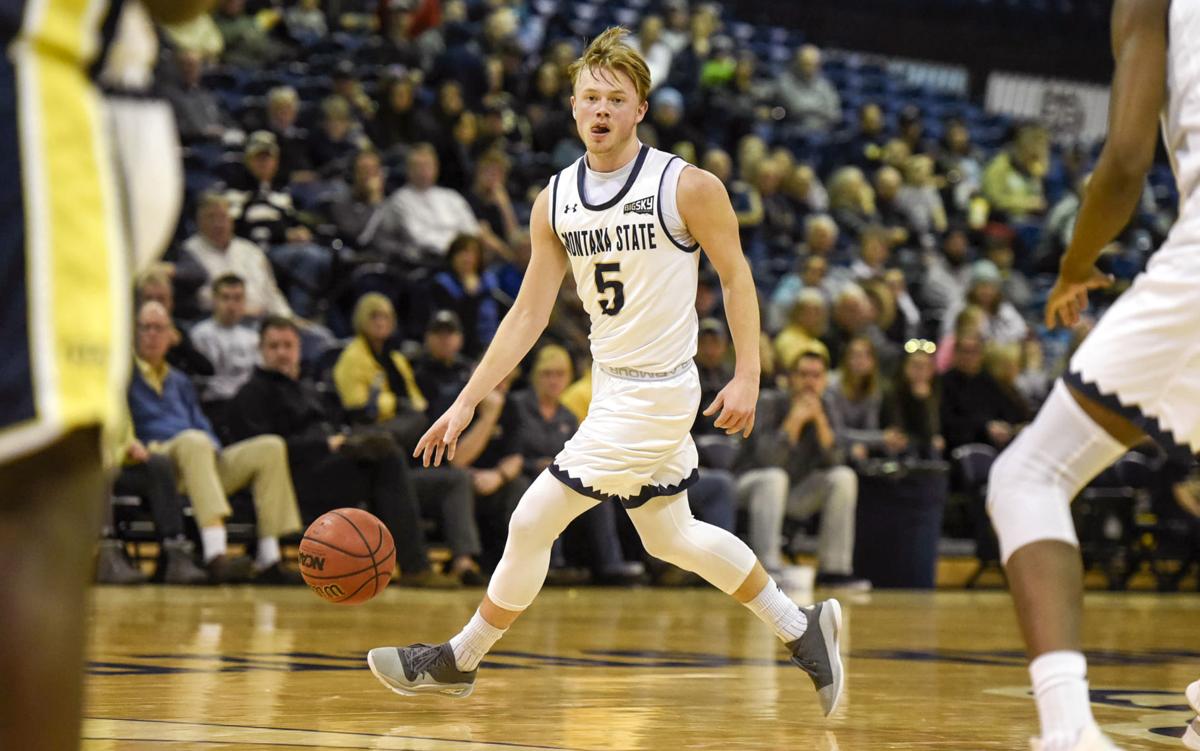 Montana State’s Harald Frey looks for a teammate to pass to against Northern Arizona on March 2 at Worthington Arena.

He directs his teammates coming out of a huddle, pointing to the spots on the floor he wants them to go.

He fights through screens as aggressively as anyone on the court, appearing to be fighting for playing time rather than the one most secure in his role.

It’s a nondescript practice in early October in an improvised gym with an overhauled roster. And there’s nothing nondescript about what Frey is doing.

The other players, standing on the side of the court, gaze forward. They look to Frey, their unquestioned leader tasked with guiding the Bobcats into the program’s next era.

Frey can’t take a break. He can miss shots, play poorly and have off nights. But he can’t afford any real bad days, because when his leadership dips, the rest of the team’s play follows.

“We don't have anybody else like that right now,” first-year head coach Danny Sprinkle said.

As MSU’s only senior who’s spent his entire career at the school, Frey is as aware of his position as anyone. The point guard averaged career highs a year ago with 17.2 points and five assists per game.

This year, he must fill the void of school career points leader Tyler Hall and steward his teammates through a coaching change, one in which he was on the hiring search committee for. Frey was named a preseason all-conference selection and has already accomplished significant individual success. The only thing left to accomplish is more winning.

Following the graduation of Hall, Keljin Blevins and Sam Neumann, no one on the Bobcats can take pressure off Frey the way that trio did. He has no choice but to face that challenge. After a whirlwind offseason, Frey has prioritized team needs over individual ones and believes he’s ready for what’s coming when the season opens Nov. 6.

That’s why he’s indispensable to MSU.

“The team starts with me. I know I'm the leader of the team. There's nowhere to hide,” Frey said. “... The sooner I can get the new guys along, trying to help them figure out the journey ahead, the better and the sooner they can help me as well.”

In the final game of his junior year, Frey tied a season low with six field-goal attempts. MSU lost in the Big Sky tournament quarterfinals by six points. A season that occasionally showed promise of the Bobcats emerging as a conference contender came to a crashing end. Three days later, head coach Brian Fish was let go.

Frey hadn’t experienced college without Hall, Blevins and Neumann as teammates. It took several days to come to grips with the end of their careers. He eventually accepted their graduation wouldn’t hinder their friendship.

That helped Frey move on. But it wasn’t easy.

“This year it was brutal,” Frey said.

Like he’s done throughout his college career, Frey spent about two and a half weeks without touching a basketball once the season ended. In each of his three years, Frey has averaged a minimum of 32 minutes per game. Taking time off helped him recharge after a draining season.

At the same time, five days after MSU announced it would look for a new head coach, Frey was included on the Bobcats’ search committee. He couldn’t talk much to his teammates about what he did, but he served as a representative for the team. Frey called it an honor to help in a new capacity.

The position showed Frey’s status within the team, athletic department and university. When he has something to say, those around him listen.

Four finalists visited campus and met with the players. The team discussed each candidate, and Frey passed along those ideas to athletic director Leon Costello.

“I would hire Harald Frey right now if I could,” Costello said in April.

In the offseason, three players with remaining eligibility left the program. Two of them, Russell Daniels and Max Schuecker, attended Sprinkle’s public introduction. Lassi Nikkarinen also left, but the Bobcats didn’t announce his departure until May.

Costello credited Frey for teammates remaining with the program until after the hire.

“He's really kind of held us together coming into this year,” senior guard Ladan Ricketts said.

Frey didn’t consider transferring. He felt too invested in the program to turn his back with one year left. He’s built relationships too deep to cut a year short.

Center Devin Kirby and manager Brayden Hall have been roommates with Frey since they were freshmen. He considers them brothers. If he ever needs something, he turns to Hall’s family since his own is a continent and an ocean away.

Assistant coach Chris Haslam, who helped recruit Frey, has been “a dad away from home,” the senior said. Costello gave Frey the opportunity to contribute in the coaching search, an experience he gained a new perspective from.

Those relationships ran beyond basketball. It’s people like them who Frey wanted to finish his college career with. And Frey wanted to give MSU and the Bozeman community — the one he said has given him so much — one last season to watch him play.

“I don't think I could have come back here in 10, 20 years feeling the same if I left the program,” Frey said. “That's just how I feel. I love this place all the best through ups and downs.”

Frey appreciated Sprinkle saying he didn’t view any players as part of a turnover period in which he was waiting until the roster was filled with players he recruited. Instead, Sprinkle embraced them, and embraced Frey, who four years ago never would have imagined feeling at home so far away from home.

When the Bobcats’ offseason practices began, Frey was busy with his national team averaging 14 points in six games in the International University Sports Foundation Summer Universiade in Naples, Italy.

Frey followed along in the team’s group chat even though he hadn’t met some of his newest teammates. He returned to campus in late July, much later than in previous years. Among his top priorities was to bond with everyone on the team and figure out what they respond to. He wanted to learn what they were experiencing athletically, academically and in life to better relate to them. Accomplishing that would help him during the season.

“In the end, we need other guys too. You can't have one voice in the locker room,” Frey said. “It's important to have an environment where it's kind of a democracy where everyone feels the confidence to speak up. That makes it better, easier to lead as well.”

He went out of his way to pass more often to create more chances for teammates. Sprinkle observed Frey could have taken more shots, but Frey recognized others needed the repetitions more than he did. Due to his intelligence on the court, Frey also often covered up for his teammates’ mistakes.

“It's helping our offense and defense, but it's also helping him from a leadership standpoint,” Sprinkle said. “... Everybody's going to key on him this year, and he's going to have to do a better job this year than ever of moving without the ball. It's going to be more challenging to score, but it's going to open up other players.”

A handful of times each practice, Frey will explain something to sophomore forward Quentin Guliford. Frey, the son of a coach and an avid observer of EuroLeague, the NBA and college basketball, gives Guliford a few points of advice. When Frey watches the sport, he picks up knowledge and wants to pass along as much as he can.

Frey said part of his desire to help comes from jealousy of Guliford’s physical attributes like his length and athleticism. Frey knows how much he can help the team and wants him to reach that potential.

“Everyone knows Harry is going to be Harry,” Guliford said. “What people don't see is just how he'll pull me off to the side and just talk to me. … Aside from what he does on the court, his role as that mentor is huge.”

Frey easily rattled off what’s stacked against the Bobcats. First-year head coach. Nine new players. He doesn’t care. He thinks MSU’s first trip to the NCAA Tournament since 1996, when Sprinkle was a freshman for the Bobcats, is still possible.

With the talented crew of last year’s seniors, Frey thought the Bobcats didn’t reach what they were capable of. He has a final chance to change his legacy. While considering his role as a senior, Frey thought to a mantra that he’s heard often from Costello.

“I think men's basketball at Montana State University right now is in a better place,” Frey said, “than when I came here.”

To close that early October practice, the Bobcats linked arms in a circle and shared what they’re thankful for. Frey is thankful for the relationship he’s already built with Sprinkle and the longer standing ones with teammates. He’s appreciative of the school that shaped him. And he’s grateful for his final year at MSU.

The Bobcats are thankful for Frey.

“The best thing about Harry,” Sprinkle said, “is he makes everybody else better.”