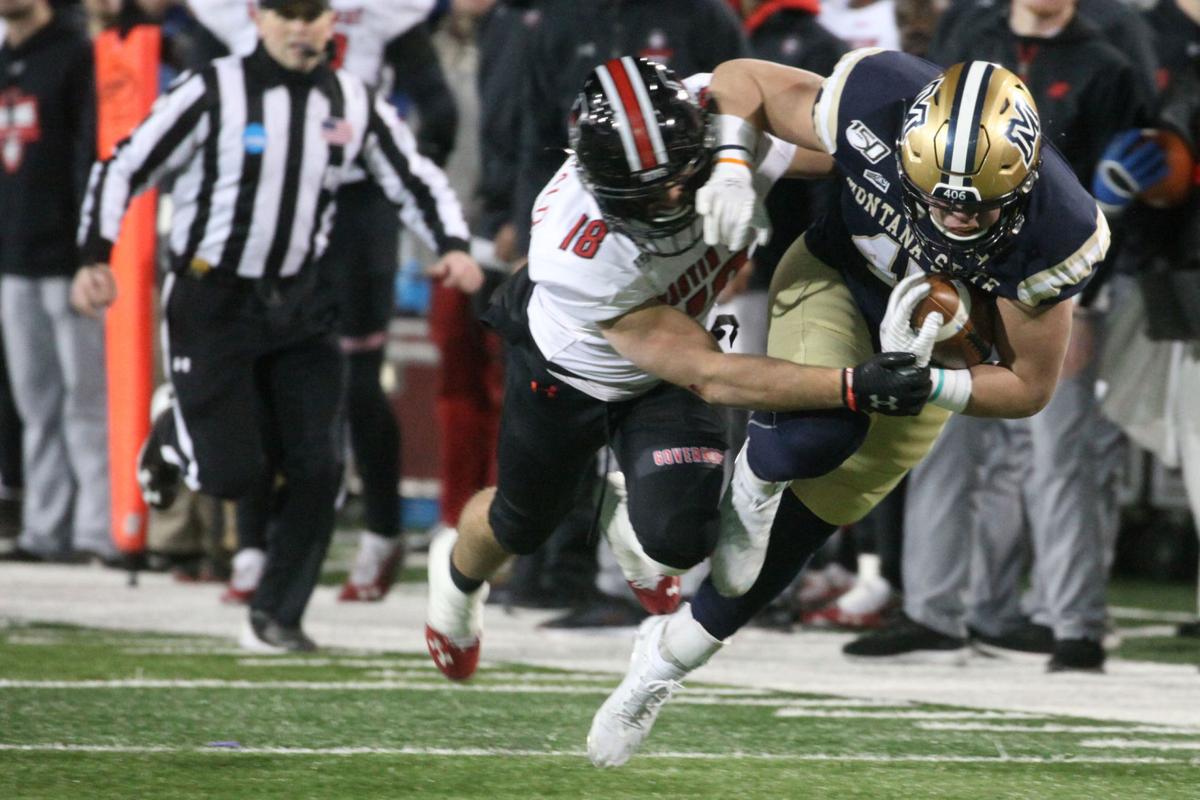 Montana State's Derryk Snell runs with the ball against Austin Peay during the FCS quarterfinals Dec. 13 at Bobcat Stadium.

With a packed Bobcat Stadium as his background on a video press conference, Nate Potter smiled and waited a moment while he pondered.

The Montana State tight ends coach was asked if any in his position group could surprise fans in 2020. He couldn’t choose one. Instead, he listed off six. And that’s only a fraction of the players he works with.

“I would like to say my whole group to be honest,” Potter said. “We’ve been flying under the radar for a while now.”

In 2019, the Bobcats relied on their defense and compounded it with a potent rushing attack. MSU head coach Jeff Choate believes this year’s offense could be more talented and balanced.

Part of why he thinks that is because of the stable of versatile tight ends the Bobcats can turn to.

“I think there’s some really talented players that are going to have to emerge,” Choate said.

Potter wants his position group to do everything well. He wants the Bobcats to have the option to have two to three tight ends, who are all interchangeable, on the field at one time.

MSU offensive coordinator Justin Udy stressed the importance of flexibility in his scheme. Tight ends, he said, can serve as matchup problems for a defense if used correctly. This is especially true in the run game as opponents must account for tight ends who can catch passes but are also flexible in alignment as they try to gain an advantage in the run game.

Udy is eagerly trying to identify ways in which the multifaceted talents MSU’s tight ends — which he called an “X factor” — can boost the team.

“I see us as a position that’s the true ultimate weapon,” Potter said. “I don’t see us coming off the football field. I want us to execute everything in our playbook as far as in the run and pass game. That’s a mark of a good tight end and a good tight end group.”

Eleven players are listed on MSU’s current roster as tight ends, which Potter loves. Each of them have different body types and strengths, he said, which allow the Bobcats to find different ways they can be integrated into the offense.

Ryan Davis was among MSU’s leading contributors at the position. He started 10 games and was usually listed at the top of the team’s depth chart. The 6-foot-3, 250-pound upcoming senior from Billings didn’t catch a pass in 2019, but he was an asset as a blocker. Potter praised Davis for his unique toughness.

“He will do whatever is needed for the team,” Potter said. “He’s strong enough mentally and physically to handle guys at the line of scrimmage, so I think that’s a huge weapon.”

Derryk Snell, an upcoming sophomore, contributed in a variety of ways. He played in all but one game last year and started two. He was third among MSU returners last year with nine receptions for 84 while catching two touchdowns.

Potter believes Snell will continue to improve as he shows maturity.

“Athletically he’s very, very talented,” Potter said. “We’re just constantly trying to think of new ways to get him involved in the offense.”

R.J. Fitzgerald is listed as a tight end on the team’s roster, but he primarily lined up as a fullback in 2019. The upcoming junior from Dillon who started four games and played in all but one often paved the way for MSU’s rushing game. Eight different Bobcats totaled at least 100 rushing yards last year as MSU was first in the Big Sky and eighth in the country with 258.1 rushing yards per game.

The Bobcats also set a single-season school record with 3,871 team rushing yards. That was possible in part because of Fitzgerald’s blocking.

“R.J. Fitzgerald is a prime example of someone who does everything the right way,” Potter said. “He’s a perfect example of how you practice, how you prepare, how you train. He’s somebody I can rely on all the time to be in the right place and do the right thing. He’s a coach’s dream for sure.”

Jacob Hadley is expected to be more in the mix as well. He moved from linebacker last season to tight end and was expected to provide the Bobcats a receiving threat. But he missed seven games due to injury and caught just two passes for nine yards last year.

Hadley, a former wide receiver from Billings Central, must still become more familiar with the technique and fundamentals of the position. But Potter believes Hadley, at 6-6, 230 pounds, has found a home at tight end.

“Once he’s confident,” Potter said, “he’s going to be scary.”

Younger players like Ryan Longergan, who Choate called the best prospect in Montana when he signed with the team, could also compete for playing time. Lonergan, a 6-4, 220-pound all-state selection at Bozeman High, played in his first game in MSU’s season opener at Texas Tech but redshirted last year.

Potter said that game served as valuable experience. While he’s still developing physically, Potter added Longergan is honing his football knowledge on his own as spring practices were canceled because of the coronavirus pandemic.

“We expect him to take on a huge role,” Potter said. “He’s very, very talented as far as his ability to contribute in the pass game and in the run game.”

Potter, in his first season with the Bobcats last year, felt his position group was relatively inexperienced before 2019. But after many of them played last year, he is eager to see MSU’s tight ends compete.

He believes “there’s still so much potential that’s untapped.”

“We’ve got a lot of young talent coming up. We’ve got some guys that I know are going to be making a lot of plays,” Potter said. “… I think they’re going to show up big this year.”