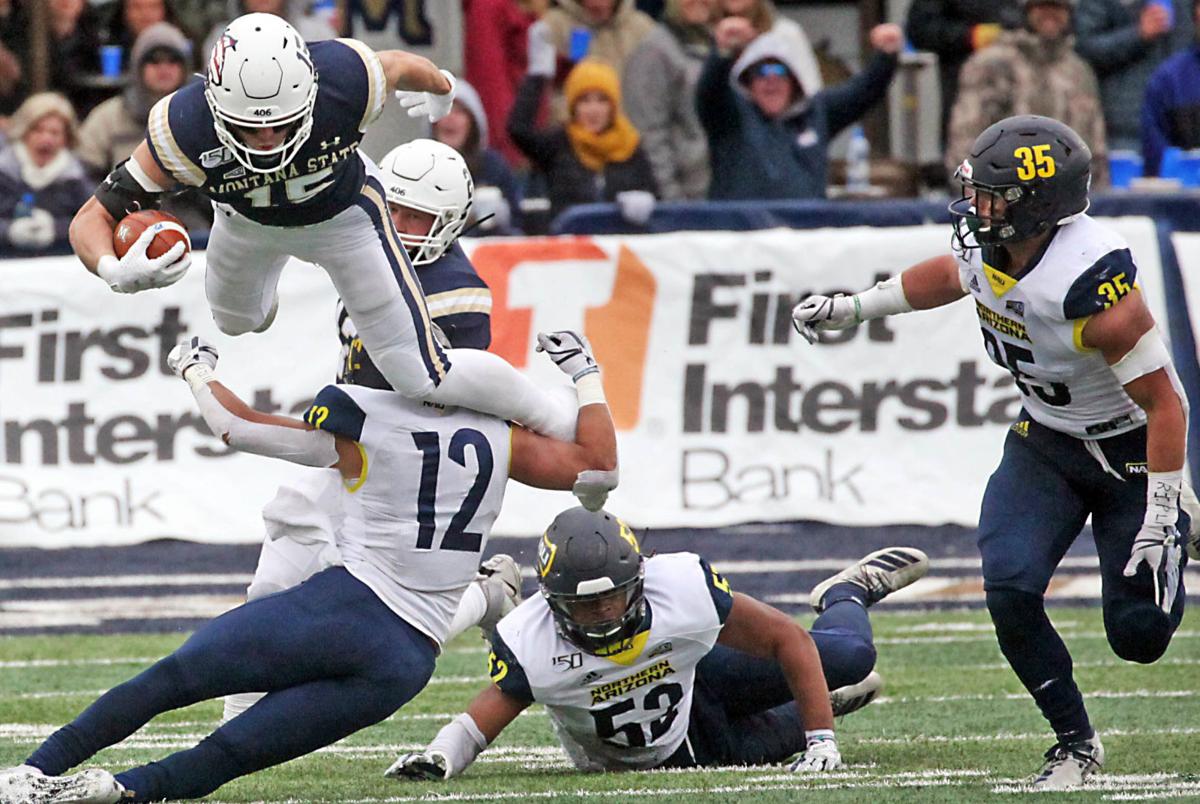 Montana State’s Troy Andersen goes airborne in the second half against Northern Arizona on Sept. 28 at Bobcat Stadium. 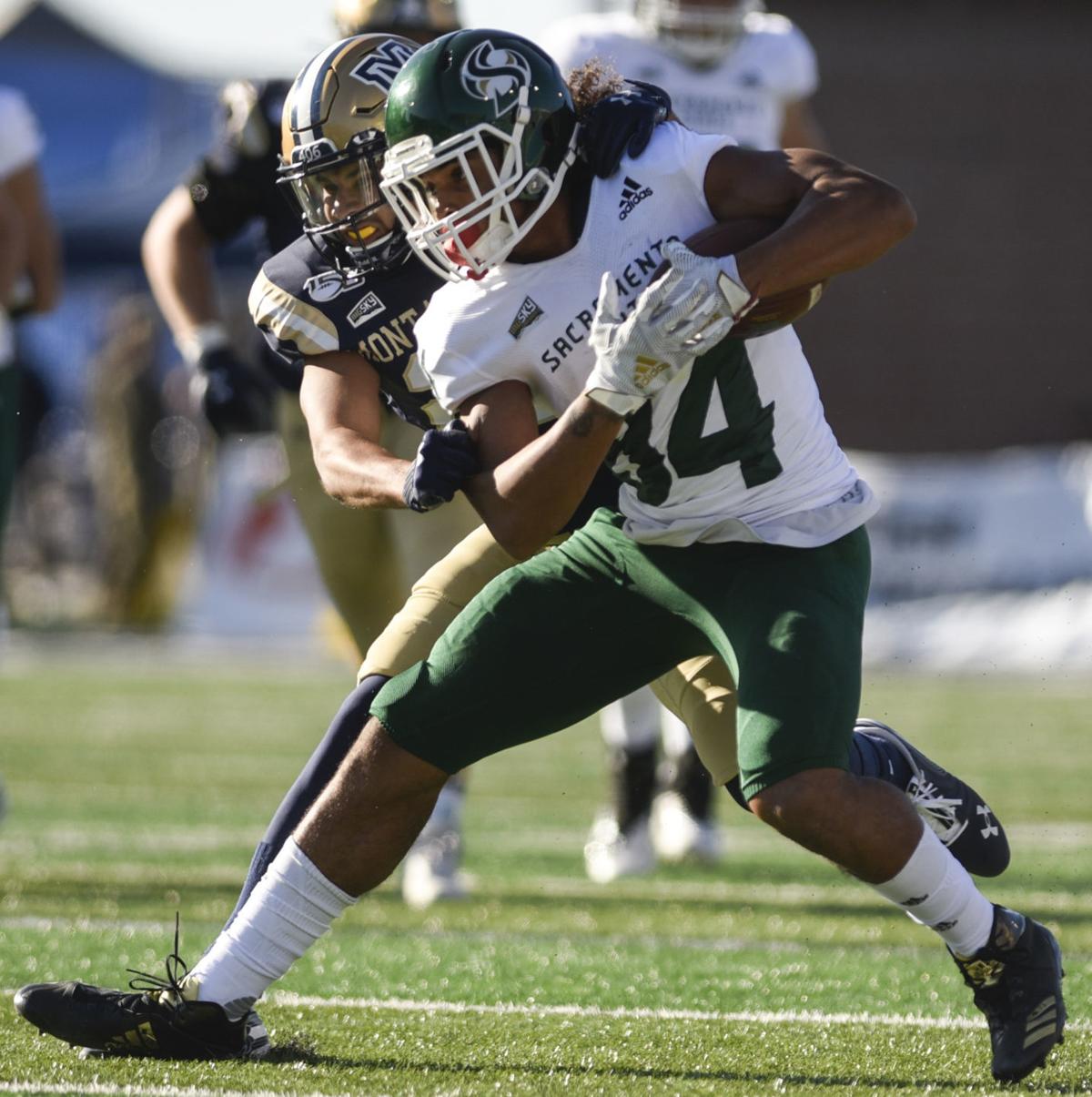 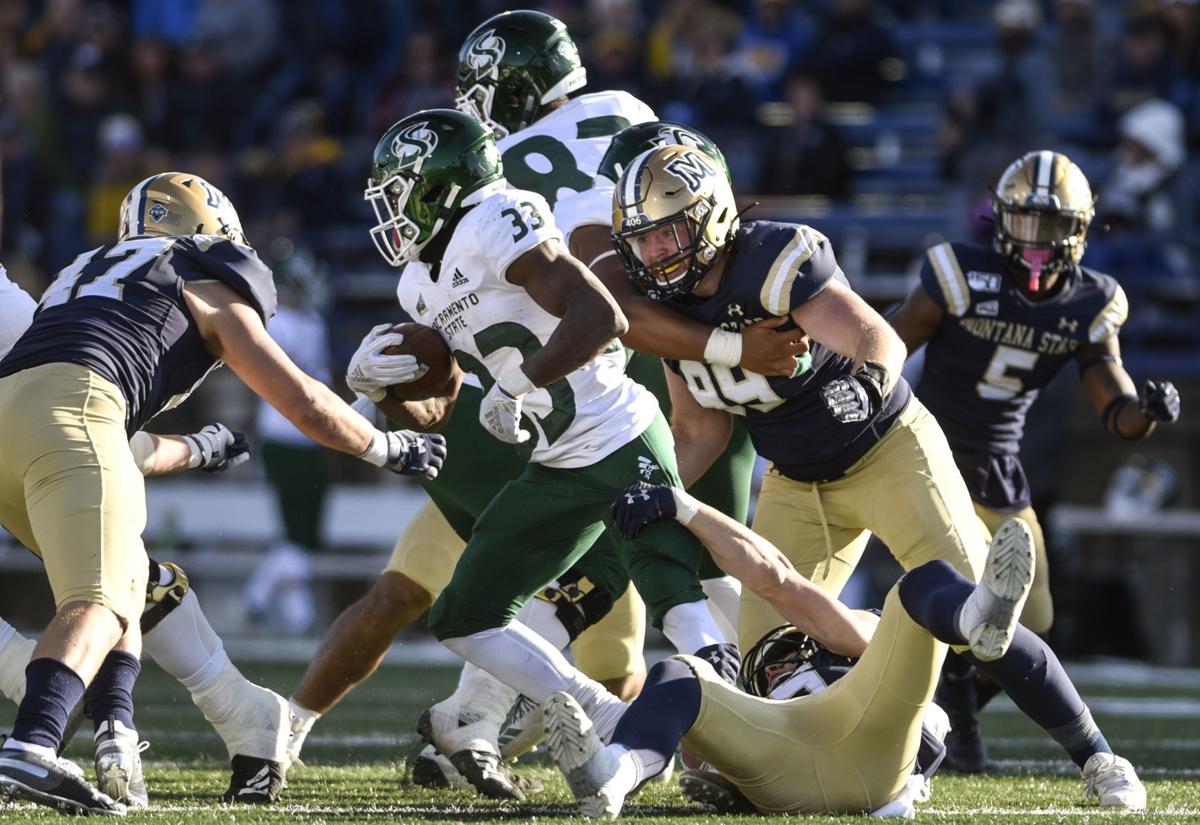 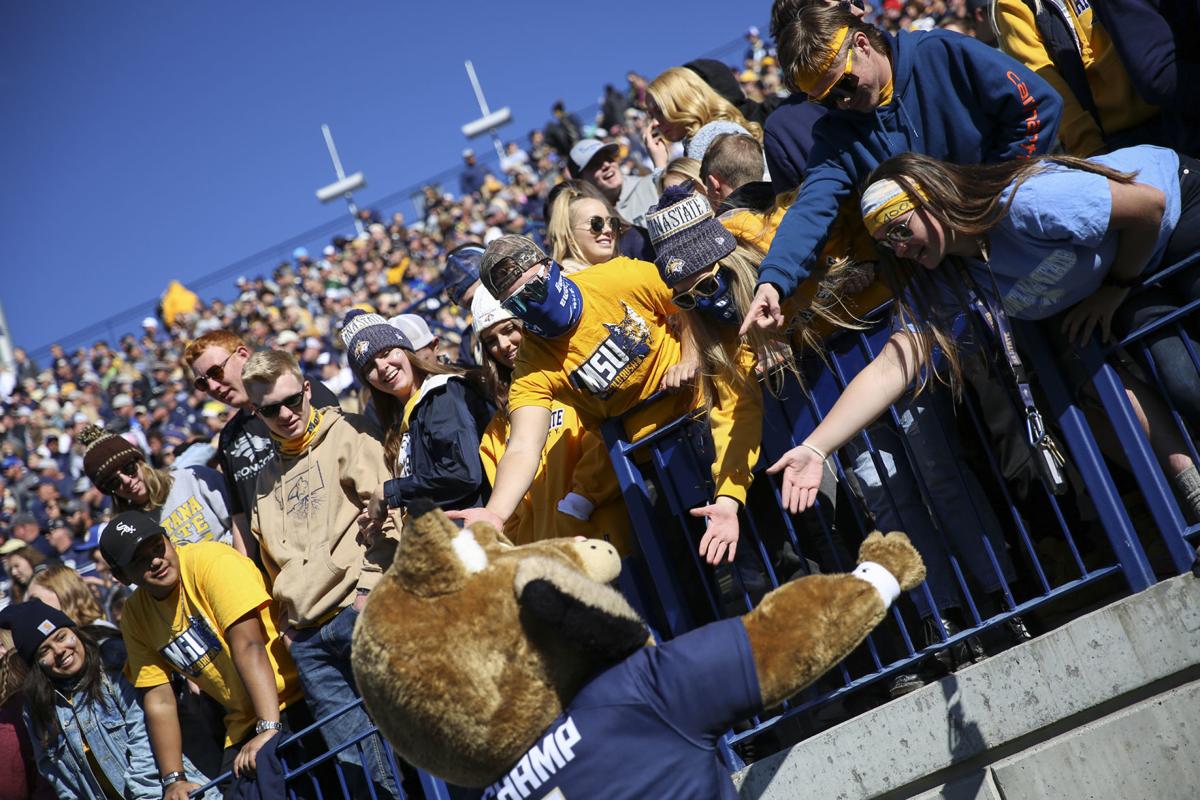 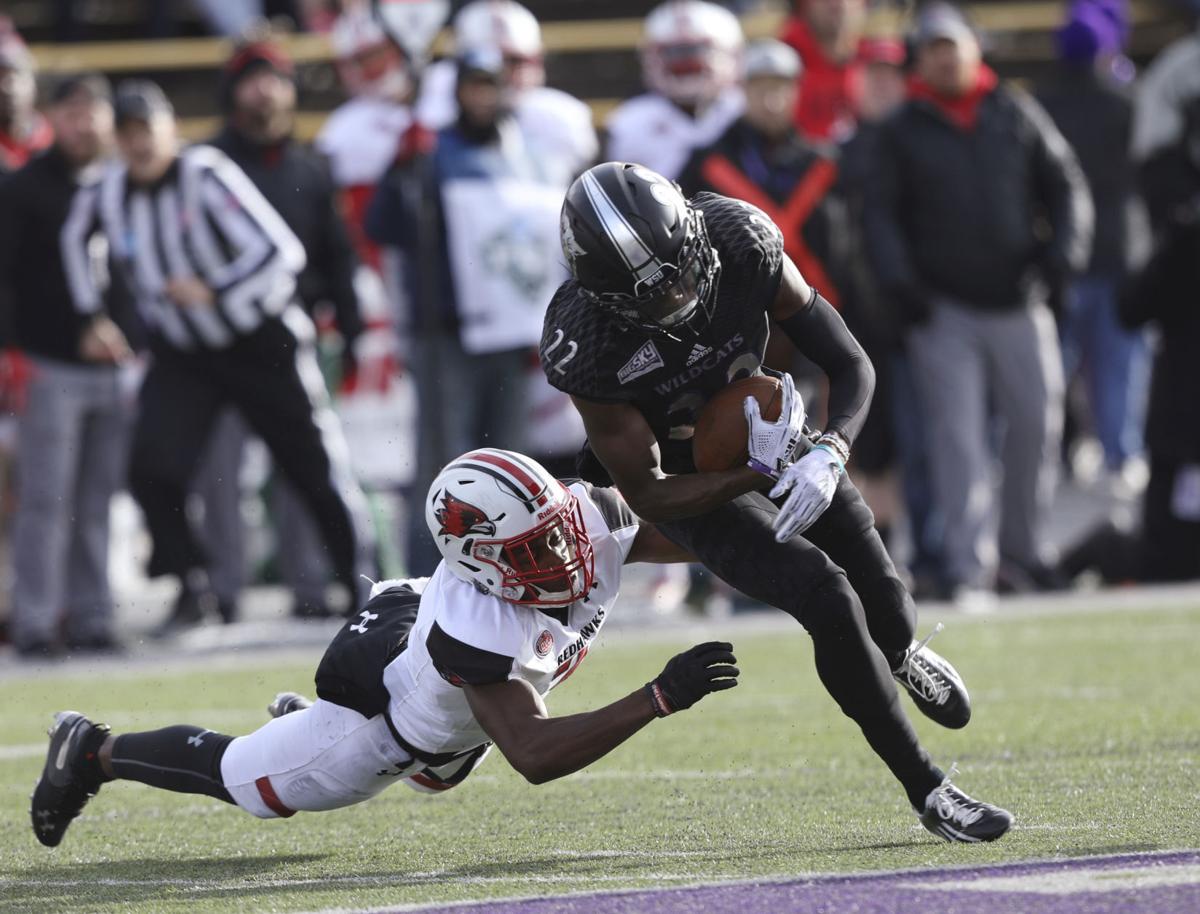 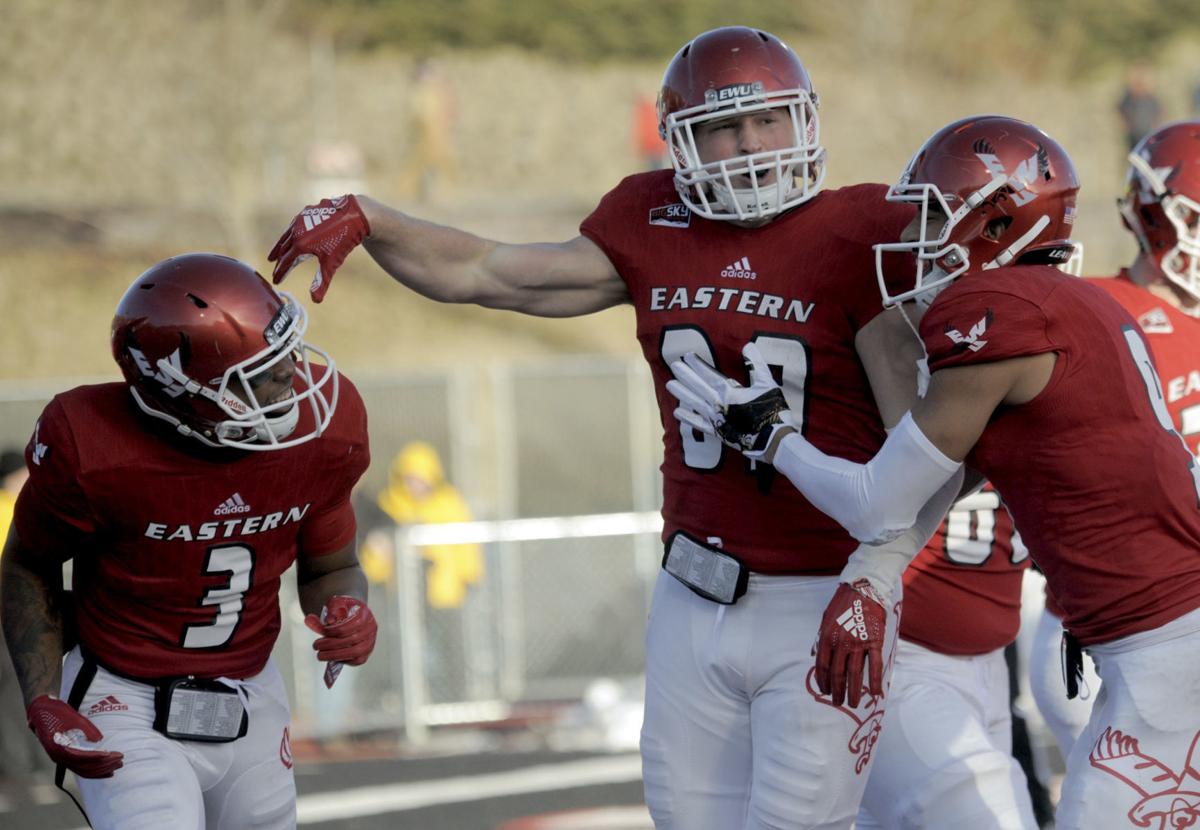 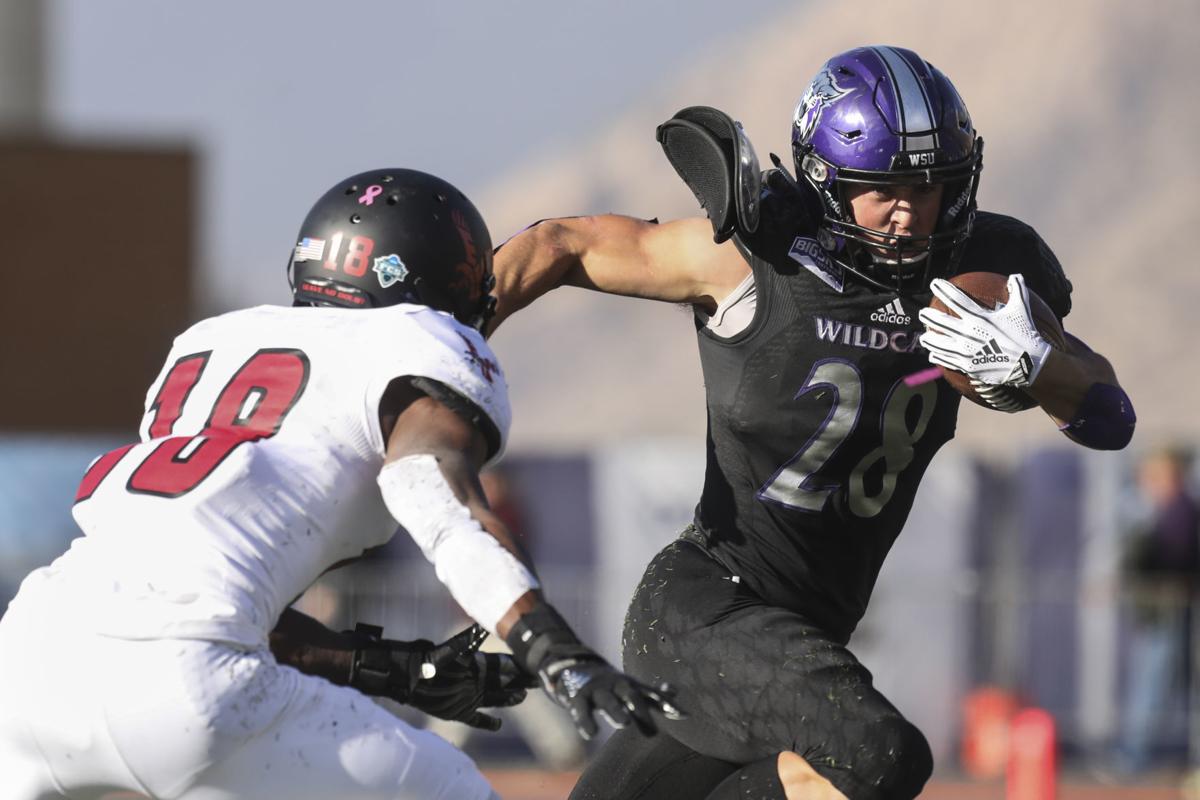 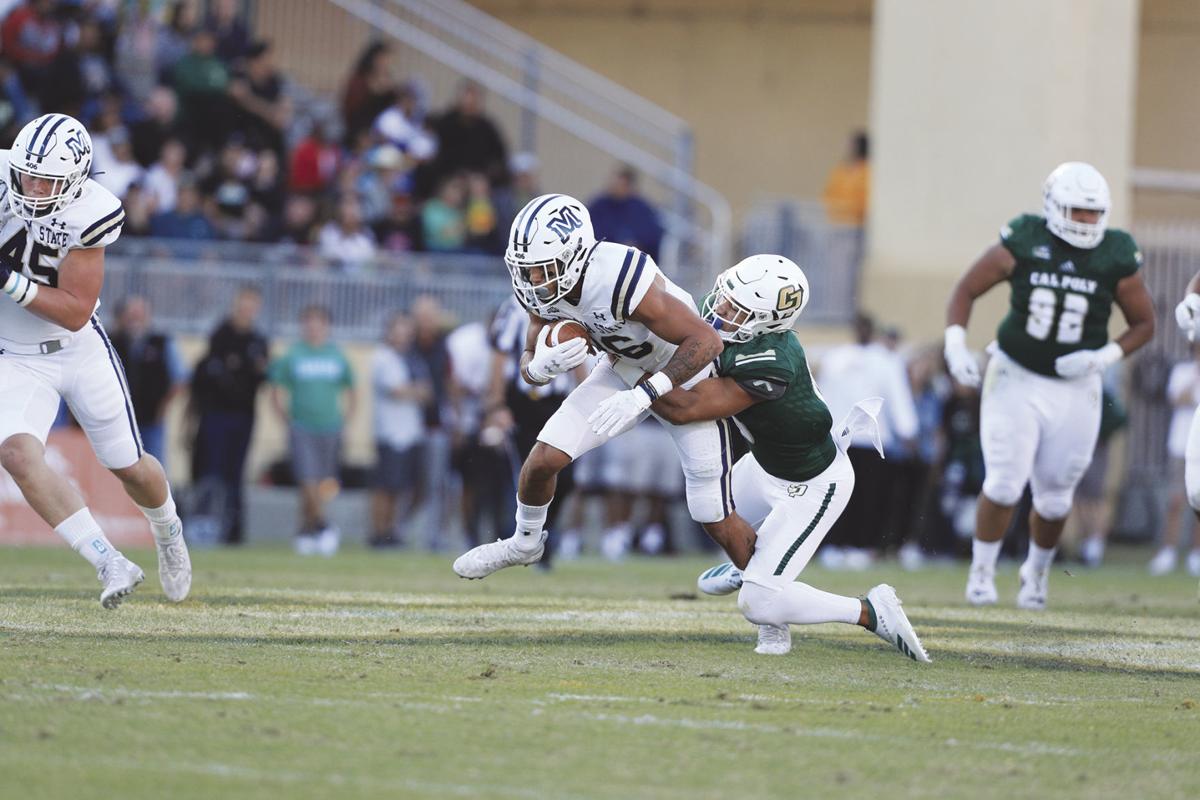 Jeff Choate has no problem criticizing the Big Sky’s set up. The Montana State head coach isn’t the only one.

The Big Sky is the largest football conference in the FCS with 13 teams. Some coaches despise that. They believe every team in the conference should play every other every season. That way, among other reasons, a true conference champion can be decided.

“It needs to be fixed. Everybody needs to play everybody, somehow,” Montana head coach Bobby Hauck said during the Big Sky’s media day in July. “The idea that everybody doesn’t play everybody, we don’t really have a conference. It’s a mythical conference champion. Unless we’re going to play a 16-game schedule, we’re going to need less teams. I don’t think any (Big Sky coaches are) in disagreement with that either.”

Some coaches and players love it. So many teams should lead to parity, thus creating a captivating league where any team can emerge as a postseason contender.

Big Sky commissioner Tom Wistrcill doesn’t see the size of the conference as an issue.

So will anything change? And if so, is there any good solution?

With so much pull in different directions, no clear resolution is in sight.

Among the 13 FCS conferences, most are between eight to 10 teams. The next closest to the Big Sky is the Colonial Athletic Association with 12, but no others have more.

It hasn’t been this way for long. Cal Poly, North Dakota, Southern Utah and UC Davis joined the Big Sky before the 2012 season to make it 13 teams. Idaho, when it dropped down from the FBS, took UND’s spot as it transitions to the Missouri Valley Football Conference, right now a 10-team league.

Most coaches’ issue with the Big Sky is a conference champion rarely is decided without a share of that title. Since the Big Sky housed 13 teams beginning in 2012, the conference has experienced four seasons with at least two teams even at the top of the standings, two of those years having three teams knotted up. And sometimes tiebreakers aren’t clean head-to-head because sometimes the tied teams didn’t play each other during the season.

“I think that we've got to take a long, hard look at what the benefits are of having a large conference in a playoff division,” Choate said last season. “My personal feeling, and I'll probably get in trouble for saying it, I don't think it's wise.

“We're playing ourselves out of opportunities to get more teams into the playoffs.”

Currently, the Big Sky rotates its scheduling except for rivalries like ’Cat-Griz. Choate sees that as a problem. Just three Big Sky teams appear on both this season and last season’s schedule for the Bobcats, one of them being Montana.

This year, they theoretically benefited because they didn’t play preseason favorites like Eastern Washington and Weber State. A weaker schedule determined by the conference could make a team look better than it is because it’s beating worse teams.

Likewise, Choate said, if a program were to line up a tough nonconference schedule to try and bolster its resume for the playoffs and it happens to play some of the best in the Big Sky, that team could end up with five or six wins and out of the playoffs.

“There’s 13 teams, and they’re all great and all deserve to be here, but the reality is I don’t like that we don’t play everybody every year,” Weber State head coach Jay Hill said. “It’s hard. I hate that.”

But Hill was quick to say finding a solution was beyond him.

Wistrcill said he’s often asked about the status of affiliate members like Cal Poly and UC Davis, both of which are only in the Big Sky in football. He’s asked if they would either be added as full-time members or if they would be pushed out of the conference.

But Wistrcill doesn’t see either as necessarily the right answer. Big Sky teams wouldn’t play everyone else in an 11-team conference with eight league games a year anyway. Plus, the way the Big Sky encapsulates the western part of the country, UC Davis and Cal Poly would be left in a tough place.

“I’m a believer that our size is a strength,” Wistrcill said. “I don’t think it’s a weakness.”

Choate admitted the Big Sky is more likely to go to 14 teams before the number of teams goes down. He mentioned Dixie State in Utah, which recently moved up to Division I and has three games scheduled with the Bobcats in the next five years, as a potential future member of the Big Sky.

With an even number of teams, one scenario Choate recommended would be to divide the “traditional” Big Sky and create two leagues that would each have an automatic bid into the playoffs for the winner of each. Every team would play every other in that division.

Cal Poly head coach Tim Walsh recommended a north and south divide with perhaps Portland State, Eastern Washington, Idaho, Idaho State, Montana and Montana State in a division and the rest of the teams in the other. That said, maintaining rivalries like ’Cat-Griz would have to be at the basis of deciding which teams go where.

While divisions would help financially so teams aren’t traveling as far as often, Wistrcill thinks a championship game should be played between the two division winners like some FBS conferences. But that’s unlikely to happen because the FCS playoffs begin a week after the regular season concludes.

“We want to have those rivalries and want to keep those intact because that’s what makes college football special,” Wistrcill said. “We also don’t want to make it so segmented that Northern Colorado and Sacramento State only play once every nine years. That’s bad for the league as well. So we need to find a good rotation of the teams while still keeping those rivalries intact.”

The coaches aren’t in consensus, though. The number of teams in the Big Sky doesn’t matter to Southern Utah head coach Demario Warren. If teams win all of their games, they’ll be named conference champion. That simple.

Little room for error could lead to an entertaining conference. Teams lose to opponents they’re not supposed to, as then No. 6-ranked MSU did last week to unranked Sac State at home. A few losses like that, Warren pointed out, is the difference between a conference championship and finishing a season short of the playoffs.

Warren loves a tough conference. Walsh believes a deep, competitive league usually means the Big Sky’s four best teams will make the FCS playoffs, which is among the most from any FCS conference every year. This week, for example, five Big Sky teams are nationally ranked in the top 24, the number of teams in the playoff field.

And sometimes scheduling doesn’t even matter that much anyway.

“We didn’t play the best teams in the conference and sucked,” Warren said of SUU’s 1-10 finish in 2018. “It doesn’t matter. Every team is good. Luck of the draw, yeah, but you’ve got to beat the team on your schedule.”

Another benefit for the Big Sky’s current set up is recruiting. The conference covers a wide range of the western United States, which Northern Arizona head coach Chris Ball said translates to Big Sky teams basically being the only ones from the FCS high school athletes on this side of the country go to.

UC Davis head coach Dan Hawkins believes teams from Montana and Idaho become more recognizable in a recruiting hotbed like California because they travel to play teams like Cal Poly or Sac State.

He also noted playing different teams provides variety for fanbases and players. And they’re arguably the most important part of this. Several players at the Big Sky’s media day loved how the conference is set up now.

Cal Poly wide receiver J.J. Koski likes having to game plan for a variety of teams in any given season. Southern Utah running back Jay Green Jr. was looking forward to playing at a new place like MSU. If the Big Sky were to divide or shrink, that may not happen.

Wistrcill didn’t express any concrete plans for changing the conference. And for some, like Montana linebacker Dante Olson, that’s fine.

Facilities playing part within dynamic of the Big Sky

Kitu Humphrey had plenty to consider.