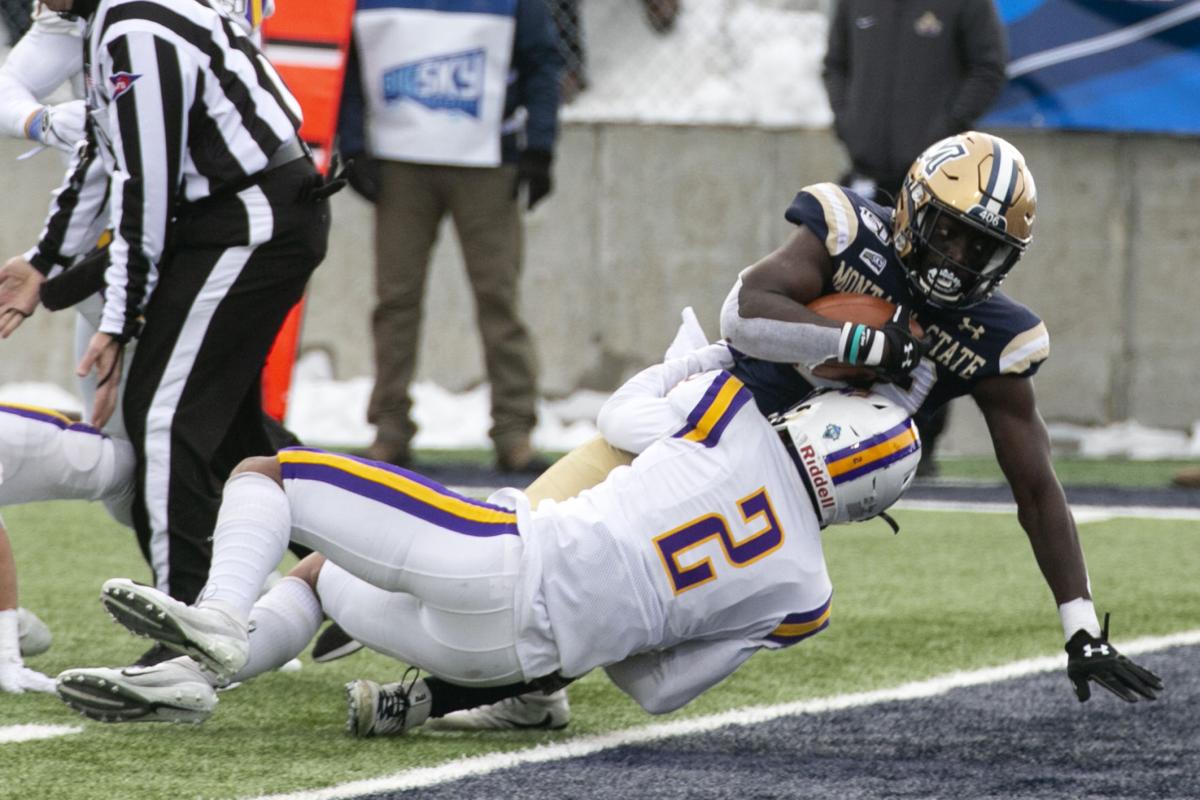 Montana State's Isaiah Ifanse plows over a UAlbany defender on his way to a touchdown Dec. 7 at Bobcat Stadium.

Jeff Choate was asked plenty of light-hearted questions. The Montana State head coach, with Idaho State’s Rob Phenicie and Portland State’s Bruce Barnum, was asked who would do best in an escape room.

Choate wasn’t sure what that was. Phenicie explained it was a game that forces a group of people to find clues and solve puzzles.

Choate quipped that he feels he’s in an escape room in real life. He said he already has enough anxiety that he wouldn’t want to try something like that.

The first of the two-day Big Sky virtual kickoff began Thursday and included taped interviews with the conference’s head coaches and the release of preseason polls. This went on despite the uncertainty swirling around college football this fall.

Big Sky commissioner Tom Wistrcill, who spoke at the beginning of the television segment, told the Chronicle earlier this week that the conference will make a decision about fall sports by the end of the month. Other FCS conferences have canceled schedules in recent weeks.

But the virtual interviews, conducted by Big Sky director of broadcast and digital media Mariluz Cook, moved forward. While coaches talked about the challenges of operating during the coronavirus pandemic, the questions were just as focused on typical Xs and Os.

Choate didn’t shy away from topics like COVID-19 or racial injustice issues, which has been the case before during his press conferences with local media.

“I think we all know this is a real virus. It’s an airborne deal,” Choate said of COVID-19. “It’s not going to be contained. People are going to get sick. We’ve got to do what we can to mitigate it.”

Even when asked football-centric questions, Choate eventually changed the subject back to what he believed were more important matters.

Choate has passionately discussed racial injustice with media before. But he hopes those types of conversations don’t end.

Choate estimates that about 35% of MSU’s roster is African-American, and others on the team are Polynesian. These players have gone through additional hardship recently, he said. He wants them to have opportunities to express themselves. He hopes that leads to further dialogue and positive change.

“I just think it’s a time for us to really listen to our student-athletes of color and make sure they understand we’re here for them,” Choate said. “… There’s an opportunity for us to lead and create change. And I really do believe we’ll have some positive things come out of this cloudy time we’re in right now.”

Choate also discussed the problems he’s tried to solve as a head coach during the pandemic. He emphasized his desire for health officials and college administrators to be consistent with safety guidelines.

While MSU allowed athletes to workout voluntarily on campus on June 1, those activities were eventually halted. Athletes, including for football and basketball, have since begun some required activities and training.

At least one MSU football player has contracted coronavirus. Athletes for multiple other Big Sky schools have also tested positive for it.

“This rollercoaster we’ve been on right now has been really difficult for them,” Choate said. “So I think that’s one thing I hope administrators understand when they’re making decisions is, we’ve just got to quit zig-zagging. … We need to stick to a plan.”

Choate expressed concern about a lack of consistent training. He believes the Bobcats weren’t as physically gifted as other conference teams, but they developed enough toughness and unity through their hours of practices together.

Choate worries that’s been taken away recently as a result of the pandemic.

“We’re just not around our guys,” he said. “And I think the secret to any organization is the people.”

Choate wasn’t the only one to discuss the effects of the pandemic. Northern Colorado head coach Ed McCaffrey emphasized that “patience is a virtue” regarding decisions about the future of college sports. UC Davis head coach Dan Hawkins added that flexibility is key.

“Everybody’s got their fingers crossed on where the season is going to go,” Barnum said.

Choate said he’s learned to rely on technology to keep players engaged and motivated during the offseason. He said his assistant coaches have asked players to participate in activities like scavenger hunts. Some athletes have shared videos of their at-home workouts to challenge others.

Choate said he’s been asked if his staff would face pay cuts if football isn’t played this fall. MSU athletic director Leon Costello said earlier this month that hadn’t happened yet with anyone in his department.

However, Choate believes his coaches deserve more compensation than before because of the additional challenges they’ve handled.

“This is dang hard,” Choate said. “... Our job is to make sure we meet the basic needs of our student-athletes: food, shelter and safety. And we want to do that, and it’s easier to do when we’re around them and can connect with them.”