Montana State’s Logan Jones follows his blockers including Jake Sessions (61) and Lewis Kidd (76) against Montana on Nov. 23 at Bobcat Stadium. 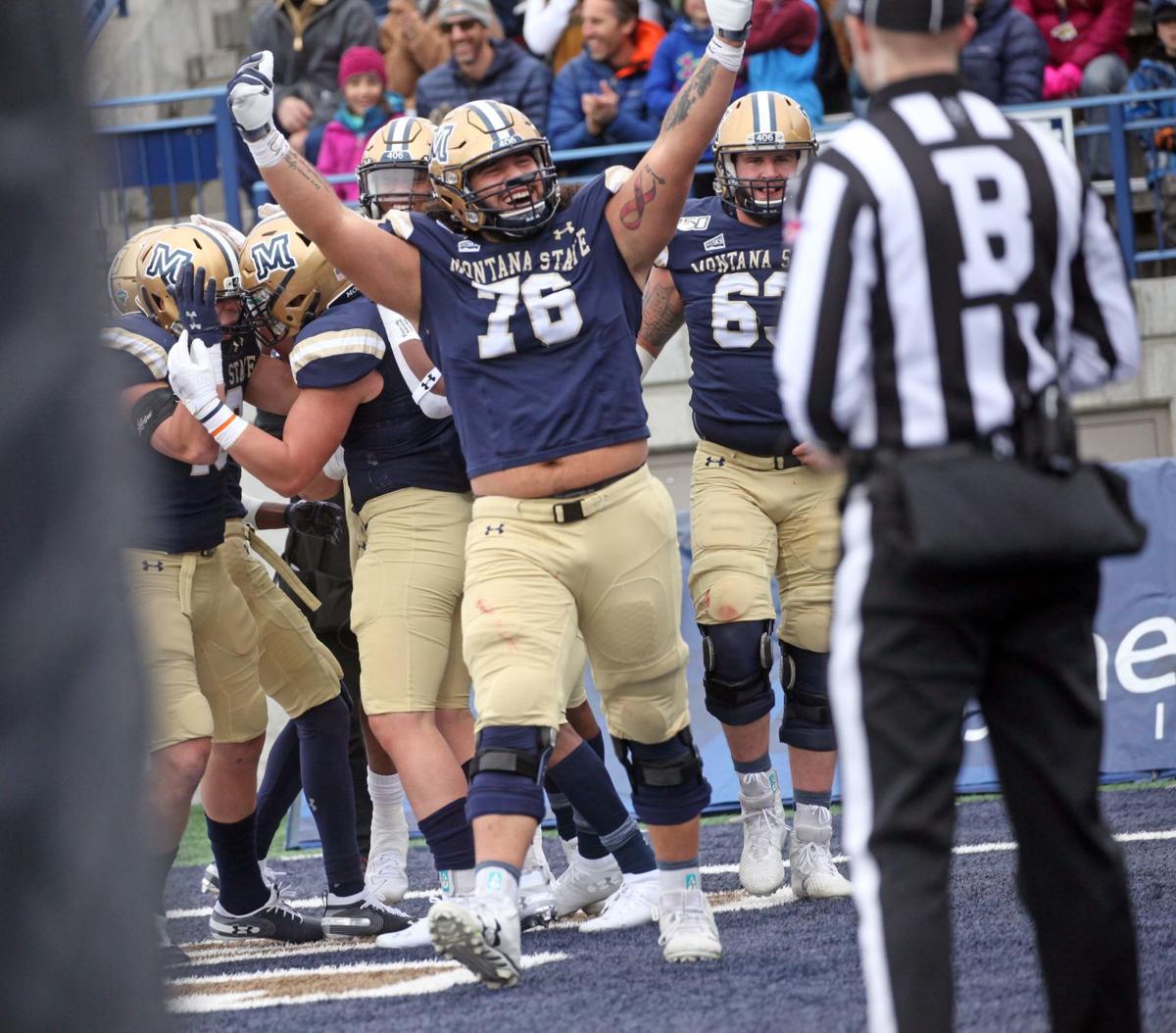 Montana State's Lewis Kidd celebrates a Bobcat touchdown during a game against Southern Utah on Nov. 2. 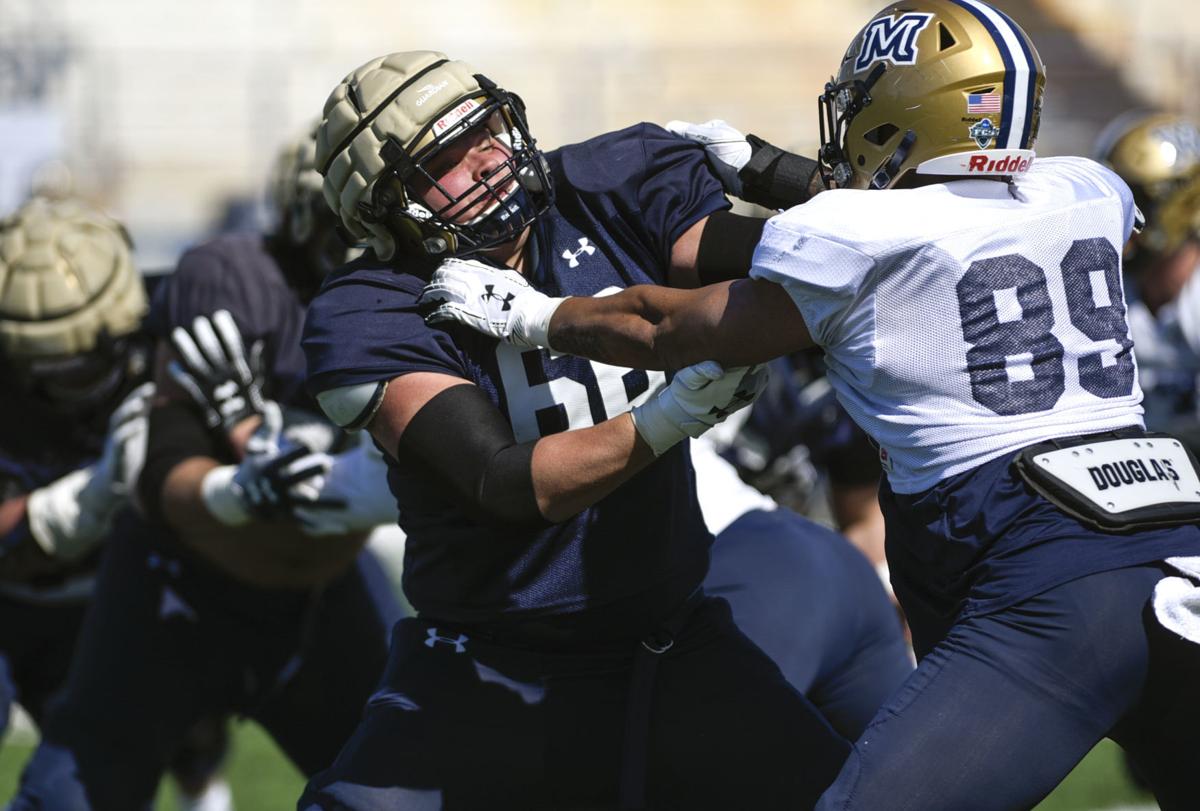 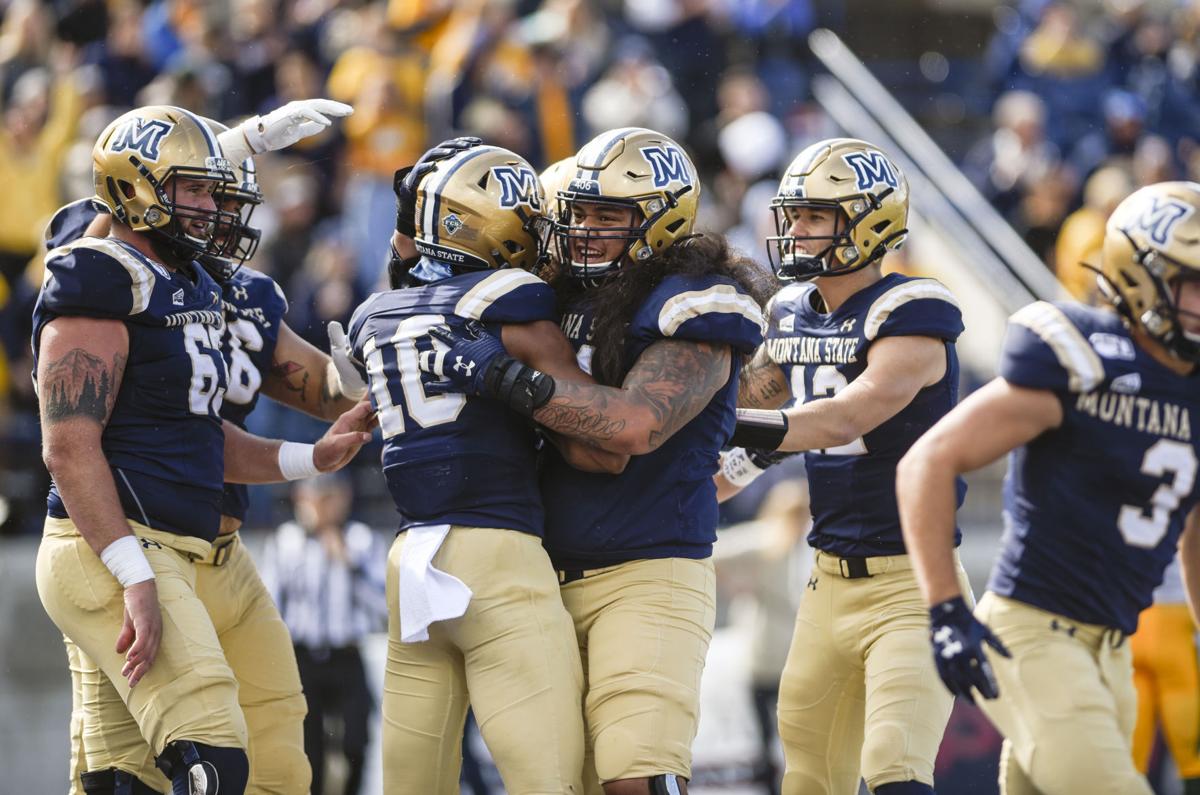 Countless teaching points flooded Nate Potter’s mind. He figured he would never have enough time to talk about them all in one sitting.

As an offensive tackle in the NFL, Potter faced pass-rushing legends like Julius Peppers and Dwight Freeney. He admits he “didn’t do too hot in that department.” Now a tight ends coach at Montana State, Potter thought of an important lesson from his pro experiences, one that translates for any blocker at any level of football.

“The biggest thing is the mentality,” Potter said. “It’s that mindset that you’re going to be the more physical blocker and you’re going to win your one-on-one matchup at the end of the day.”

The possibility of college football happening this fall is unknown as the coronavirus pandemic continues. Football players from multiple Big Sky schools, including MSU, have reportedly tested positive for COVID-19. Division I conferences like the Pac-12 have already adjusted their fall sports seasons.

However, if the Bobcats do play this season, their offensive line may be one of the strongest and experienced position groups on the team. They return six players with starting experience and two all-Big Sky selections from a year ago.

They’ve shown they have the type of mentality Potter spoke about.

“It always starts and finishes up front on both sides of the line of scrimmage,” MSU head coach Jeff Choate said.

The Bobcats will be without one of their most crucial components of the line from a year ago. Last season, Mitch Brott set MSU’s career consecutive start streak at 50, holding down the left tackle spot for the last two years of his career. He was a second-team all-American and first-team all-Big Sky pick in 2019.

With Brott leading the line, it didn’t seem to matter who was running with the ball. The Bobcats were first in the conference and eighth in the nation with 258.1 rushing yards per outing and established a single-season program record with 3,871 team yards on the ground.

And that was with eight Bobcats recording at least 100 yards for the season and none reaching 1,000. MSU’s offensive line also tied a Big Sky-best with 14 sacks allowed in 2019.

Choate called Brott a “great player” and said “there’s going to be a little bit of a void.”

“(Brott) was a tremendous player, and we’ll certainly miss him up front,” MSU offensive coordinator Justin Udy added. “But I’ve told our group and all of our coaches and all of our offensive unit, I expect the offensive line to anchor our unit. There’s a bunch of guys that have a bunch of snaps up front and we need to be able to lean on that experience.”

Lewis Kidd is a standout among MSU’s returners. The 6-foot-6, 312-pound upcoming senior was a second-team all-conference guard last season and has started 33 straight games in his career.

Udy, in his first year with the team, was quickly impressed by Kidd’s character. Udy said Kidd elevates the position group because he makes the other linemen understand their value to the run-first program.

“They trust him. They look to him to lead when things get tough,” Udy said. “You can just tell. He always meets the challenge with his chin up and that great personality. I think that goes so much further than a lot of people even know when they are on the outside looking in.”

The Bobcats will bring back five other offensive linemen who started multiple games last season. Udy noted MSU was “very, very lucky” to have Brian Armstrong as an offensive line coach because he understands the strengths and weaknesses of the returners.

Upcoming senior Taylor Tuiasosopo was a third-team all-Big Sky guard a season ago. Choate believes upcoming junior Connor Wood would’ve been an all-conference tackle as well last season if injury hadn’t held him out of four of MSU’s last six games. Zach Redd was MSU’s primary starter at center, but he also played at guard depending on who was available.

“We’ve got some good young players on the line, and it will be interesting to see how they develop,” Choate said. “There’s going to be some great competition. I feel like we’ve got good depth.”

Udy said earlier this offseason that MSU’s left tackle spot was open. Spring practices would’ve been a prime opportunity to try out different combinations and see who fit best there.

Udy wants his offensive linemen to be flexible and versatile, meaning multiple players have the potential to shift over to that spot.

The Bobcats mixed up their lineup along the offensive line throughout last season, too. Udy hopes to pick out about eight to 10 linemen capable of playing and try out a variety of combinations to find what works best.

Udy believes the Bobcats need to rely on their offensive line in critical situations. Challenging games, he said, can be won by that position group.

“Run game or the pass game,” Udy said, “those guys’ ability to control the line of scrimmage is what’s going to allow us to be in football games, competing into the fourth quarter and giving us a chance to reach all the goals that we set for ourselves.”