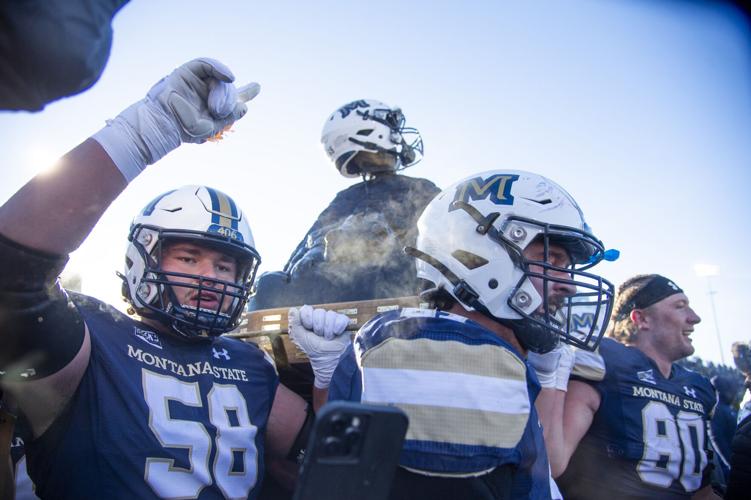 The Montana State football team carries the Great Divide Trophy after the 121st Brawl of the Wild Saturday at Bobcat Stadium. 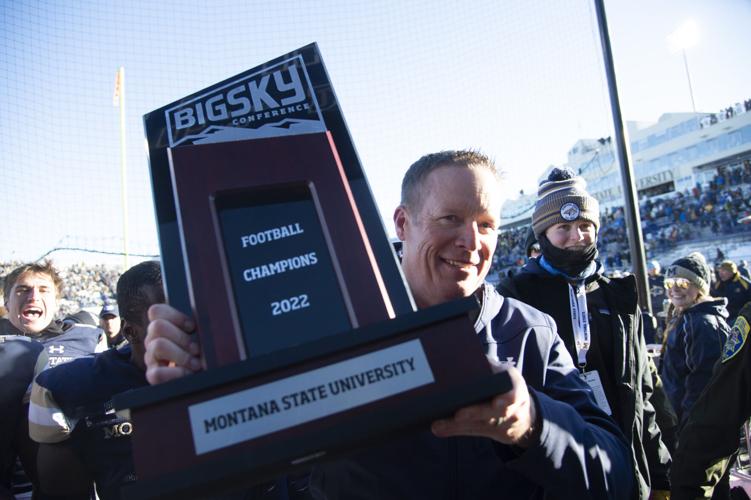 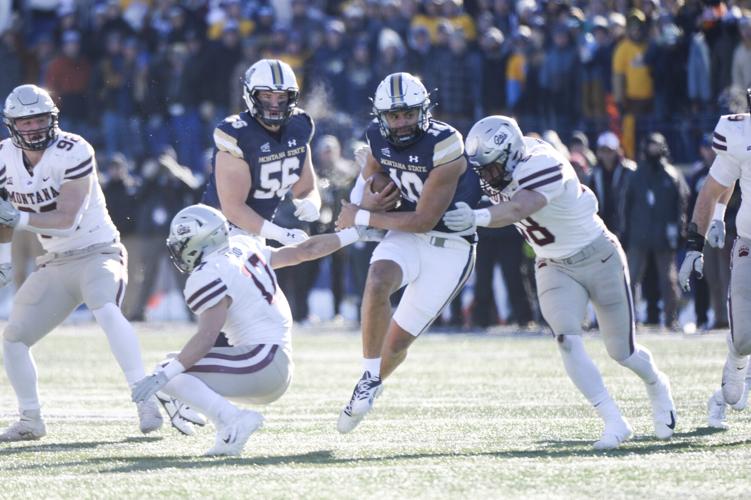 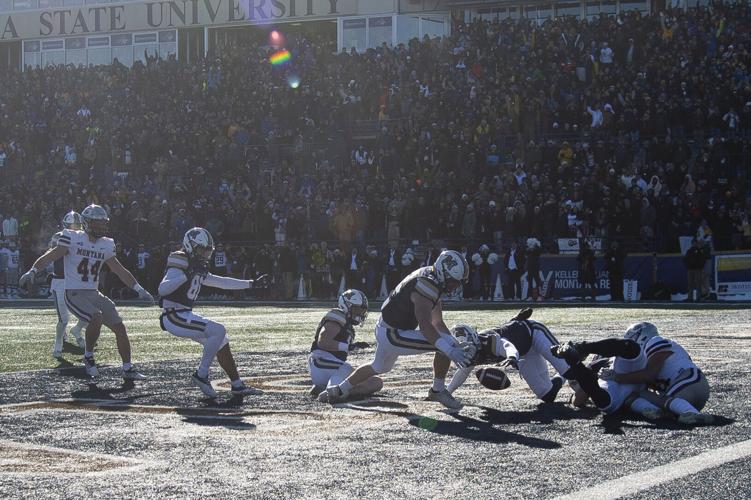 Montana State linebacker Jory Choate scoops up a loose ball in Montana's end zone for a touchdown during the 121st Brawl of the Wild Saturday at Bobcat Stadium. 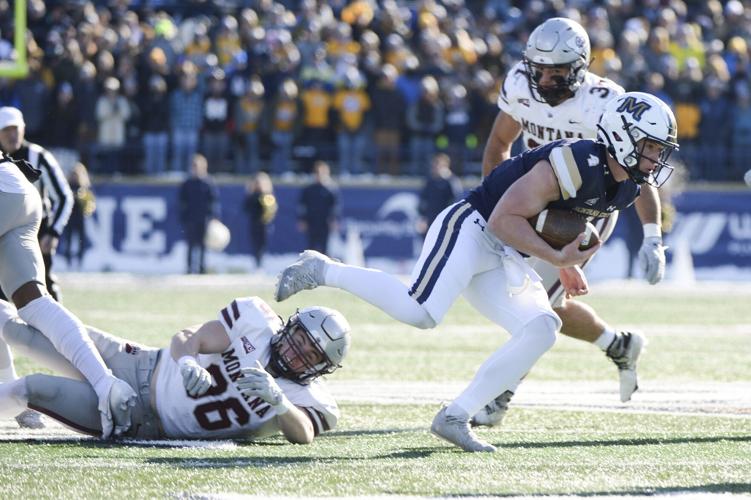 Montana State quarterback Tommy Mellott breaks a tackle during the 121st Brawl of the Wild Saturday at Bobcat Stadium. 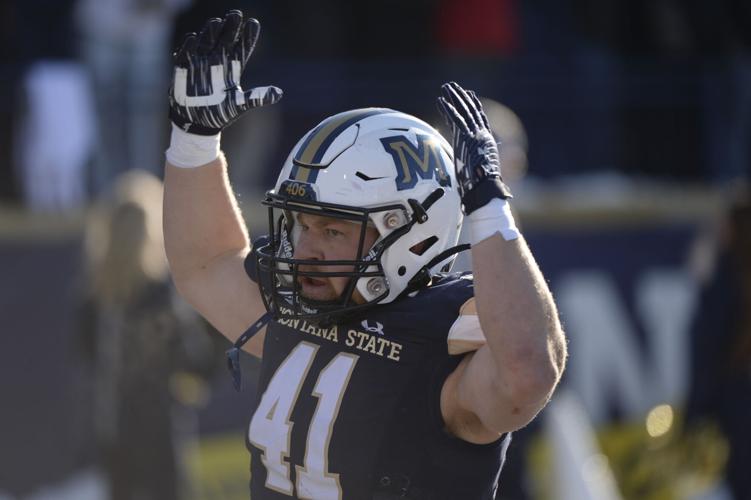 Montana State fullback R. J. Fitzgerald pumps up the crowd during the 121st Brawl of the Wild Saturday at Bobcat Stadium. 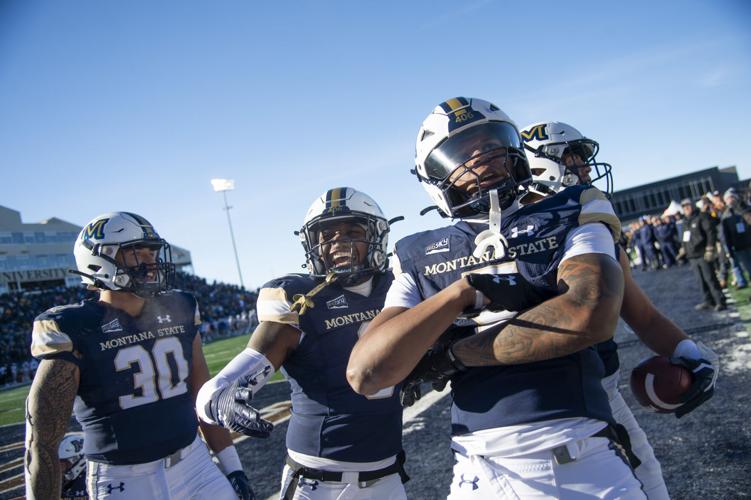 Members of the Montana State defense celebrate a play during the 121st Brawl of the Wild Saturday at Bobcat Stadium.

The Montana State football team carries the Great Divide Trophy after the 121st Brawl of the Wild Saturday at Bobcat Stadium.

Montana State linebacker Jory Choate scoops up a loose ball in Montana's end zone for a touchdown during the 121st Brawl of the Wild Saturday at Bobcat Stadium.

Montana State quarterback Tommy Mellott breaks a tackle during the 121st Brawl of the Wild Saturday at Bobcat Stadium.

Montana State fullback R. J. Fitzgerald pumps up the crowd during the 121st Brawl of the Wild Saturday at Bobcat Stadium.

Members of the Montana State defense celebrate a play during the 121st Brawl of the Wild Saturday at Bobcat Stadium.

Let the news come to you

Get any of our free daily email newsletters — news headlines, opinion, e-edition, obituaries and more.

If you value these stories, please consider subscribing.

His father, Jeff Choate, was known as the “Griz Slayer” as Montana State’s head coach with a 4-0 record against in-state rival Montana.

Now, in his final Brawl of the Wild as a player, it was linebacker/backup long snapper Jory Choate’s turn to add to the legacy. The opportunity came after the Bobcats forced a fourth down late in the first quarter.

UM punter Patrick Rohrbach lined up for the punt on the UM 16-yard line. What happened next looked closer to the MSU-Weber State game on Oct. 22, which featured four safeties. Long snapper Grayson Pibal’s snap skied over Rohrbach’s head and into the end zone.

As players from both sides raced to recover the ball, Choate pounced on it to secure not a safety, but an MSU touchdown. That score put the Bobcats up by two possessions and firmly secured momentum for the home side.

“I had a lot of dreams about this game,” said Choate, who is also a Bozeman High graduate. “And I can promise you, none of them included a touchdown.”

Whether anyone refers to Jory Choate as “Griz Slayer Jr.” or any similar nickname in the future remains to be seen. But what isn’t up for debate is the complete domination by No. 3 MSU over its historic rival No. 13 UM in the 121st Brawl of the Wild, a 55-21 victory on Saturday afternoon.

MSU quarterback Tommy Mellott, a Butte native, said he remembers watching this game around Thanksgiving time growing up — a product of every Montanan growing up “either a Griz or a Bobcat fan.”

“It’s extremely special for me to have an opportunity to play in this game and to contribute and help the team that I dreamed to play for get a win,” Mellott said.

Added Choate: “It’s hard to beat. I can’t really describe it in words. But man, it feels good to be back on the right side of this game.”

MSU improves to 10-1 on the season (8-0 in conference play) and is all but guaranteed a top three seed in the upcoming FCS playoffs. The Bobcats are also guaranteed at least a share of the Big Sky title for the first time since 2012.

“To go through the conference season and take care of business week in, week out, overcome some adversity along the way, to be the champions of our league — that’s a big deal for this program,” MSU head coach Brent Vigen said. “We’ve got bigger things ahead, but to win a conference championship, it hadn’t been done here in 10 years. So we’ll take it.”

MSU also set an attendance record for Bobcat Stadium with 22,037 fans in attendance for Cat-Griz.

The Bobcats’ run game — one of the best in the FCS all season with 314.4 yards per game entering Saturday — was virtually unstoppable. It started on an opening drive that featured six runs for 75 yards split between Mellott (four carries for 46 yards) and running back Elijah Elliott (two for 26 yards). Mellott scored a 1-yard touchdown.

UM did respond nicely on the following drive, capped by a pinpoint pass from Grizzlies quarterback Lucas Johnson to wideout Malik Flowers from 30 yards out.

But the vaunted UM defense — which, to the Grizzlies’ credit, features several standouts like Patrick O’Connell, Marcus Welnel and Justin Ford — continued to struggle. MSU quarterback Sean Chambers returning to the field after missing the past month didn’t help either. He orchestrated another scoring drive alongside Mellott, handing it off to the Butte native for a 12-yard score.

The botched punt soon followed to put the Bobcats up 21-7. Rohrbach even bobbled the next punt before sending it away. MSU finished the first quarter with 15 carries for 162 yards.

Mellott attempted the first pass for MSU with 13 minutes, 59 seconds left in the half on a throw away. But the Bobcats relied on the run still, surpassing 200 yards on the ground early in the second quarter. And while it took four tries inside the UM 5-yard line — and an unsportsmanlike conduct penalty on Grizzlies safety Robby Hauck — Chambers scored on fourth-and-goal.

The Grizzlies’ stout run defense — which ranked eighth in the FCS with 97.3 rushing yards allowed per game entering Saturday — factored heavily into MSU’s offensive game plan heading into this game, Vigen said. The focus was to exploit the edges, mix in some play-action and “stay ahead of the chains.”

“We probably didn’t have to do as much as we maybe thought we might,” Vigen said, “but I think we are running the football at a higher rate with a lot of different guys. I think we’re pretty difficult to defend right now, and that’s a good place to be.”

The UM offense responded with one of its best drives of the game, bringing the ball inside the MSU 5-yard line. But Johnson and running back Nick Ostmo didn’t pull off the fake handoff on a read-option play, resulting in a fumble that was recovered by MSU linebacker Callahan O’Reilly.

The Bobcats’ ensuing drive — which featured the first MSU completion on a 28-yard pass to tight end Treyton Pickering — ended in a 34-yard field goal from Blake Glessner to end the first half.

MSU finished the first half with 37 rushes for 267 yards and three rushing scores.

Despite trailing 31-7 to open the second half, UM opted to punt on its next drive instead of going for it on fourth-and-short. Johnson looked visibly disappointed walking off the field.

Which makes sense, given that MSU went right back down the field for another score. Mellott found tight end Derryk Snell for gains of 26 and 24 yards, shortly followed by a 27-yard rushing score by wideout/running back Marqui Johnson.

It also didn’t help the Grizzlies when MSU strong safety Rylan Ortt jumped a route and intercepted a Johnson pass on the next drive. That helped set up a 28-yard field goal from Glessner.

Johnson left the game with just over five minutes left in the third quarter with an apparent leg injury. Daniel Britt replaced him at quarterback, but was quickly stopped on fourth down to force another turnover.

Meanwhile, all was well for MSU’s offense. The Bobcats even pulled out some tricks in the fourth quarter, such as a Snell jump pass on fourth-and-1. Snell found fellow tight end Pickering wide open for the 18-yard touchdown.

MSU offensive coordinator Taylor Housewright said he implemented that play after seeing Tennessee Titans running back Derrick Henry pull it off against the Green Bay Packers on Thursday Night Football. Fullback RJ Fitzgerald added that the play was introduced around 4 p.m. during Friday’s practice and only ran through twice.

{p dir=”ltr”}”We just kind of put it in there and it was pretty awesome to see (in the game),” Fitzgerald said.

UM ended its scoreless streak with a 1-yard rushing score by tailback Isiah Childs midway through the fourth quarter. Fitzgerald — who’s become a bit of a scoring machine with six touchdowns this year — also scored late.

“Honestly, I didn’t really know what was going on,” Fitzgerald said. “And then I was like, ‘Oh, I guess I’m running back on this play.’ So I just ran it in there.

“That’s pretty special to be able to score and celebrate with my teammates. It’s just a fun day to be a Bobcat.”

Near the end of the fourth quarter, Britt passed for 32 yards to Cole Grossman for a touchdown to complete the scoring.

With the backdrop of “College GameDay” and the usual festivities surrounding Cat-Griz each season over with, the Bobcats can now focus on the upcoming FCS playoffs. MSU will find out where it stands when the official bracket is revealed Sunday morning.

But for now, MSU will cherish the momentous conclusion of a “long, long week,” as Choate said.

“I didn’t ever think Saturday would come and here it is,” Choate said. “It’s awesome to go out the right way. And we’ve got a lot more play for now. So time to focus back up.”

Let the news come to you

Get any of our free daily email newsletters — news headlines, opinion, e-edition, obituaries and more.

This offer is currently unavailable.