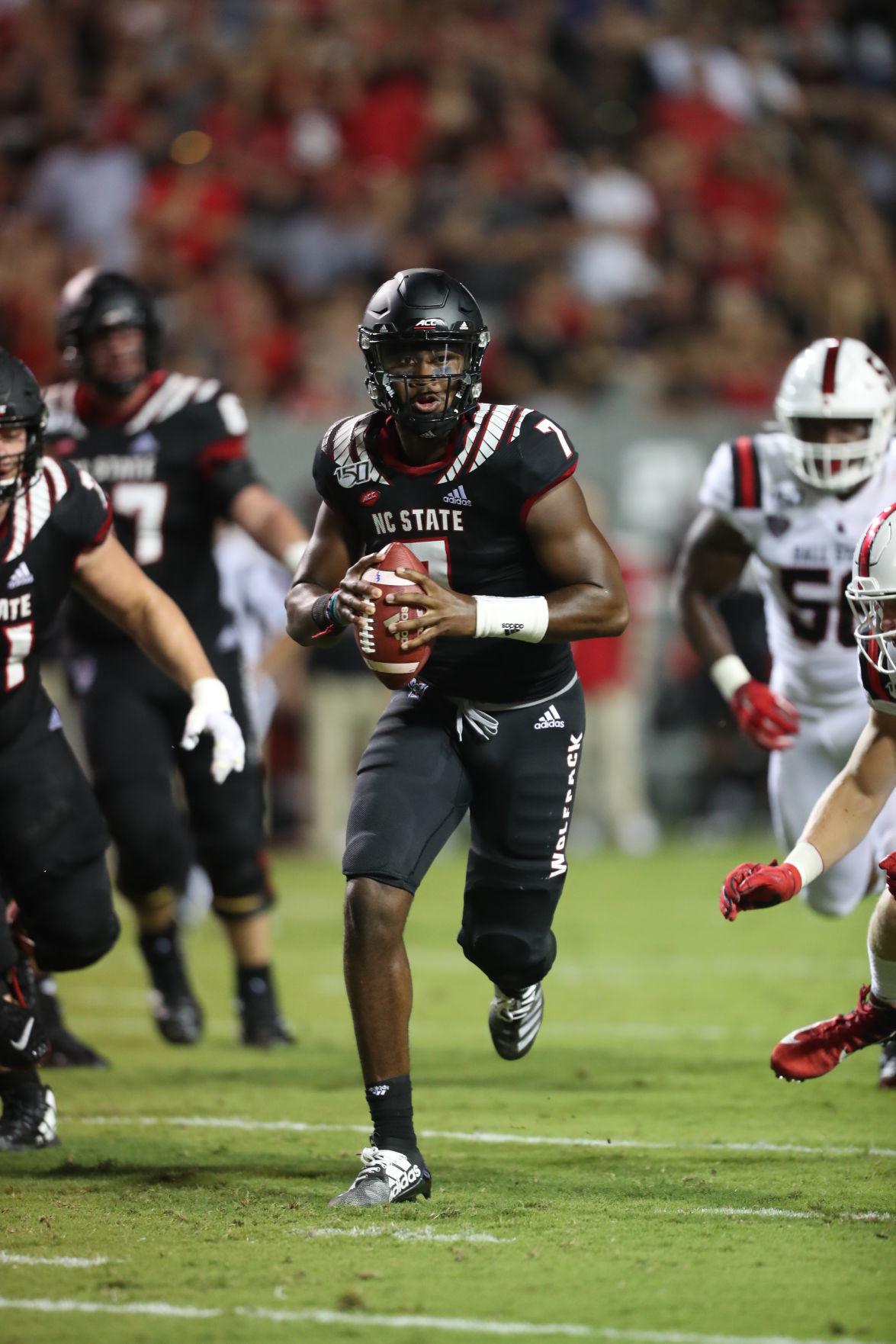 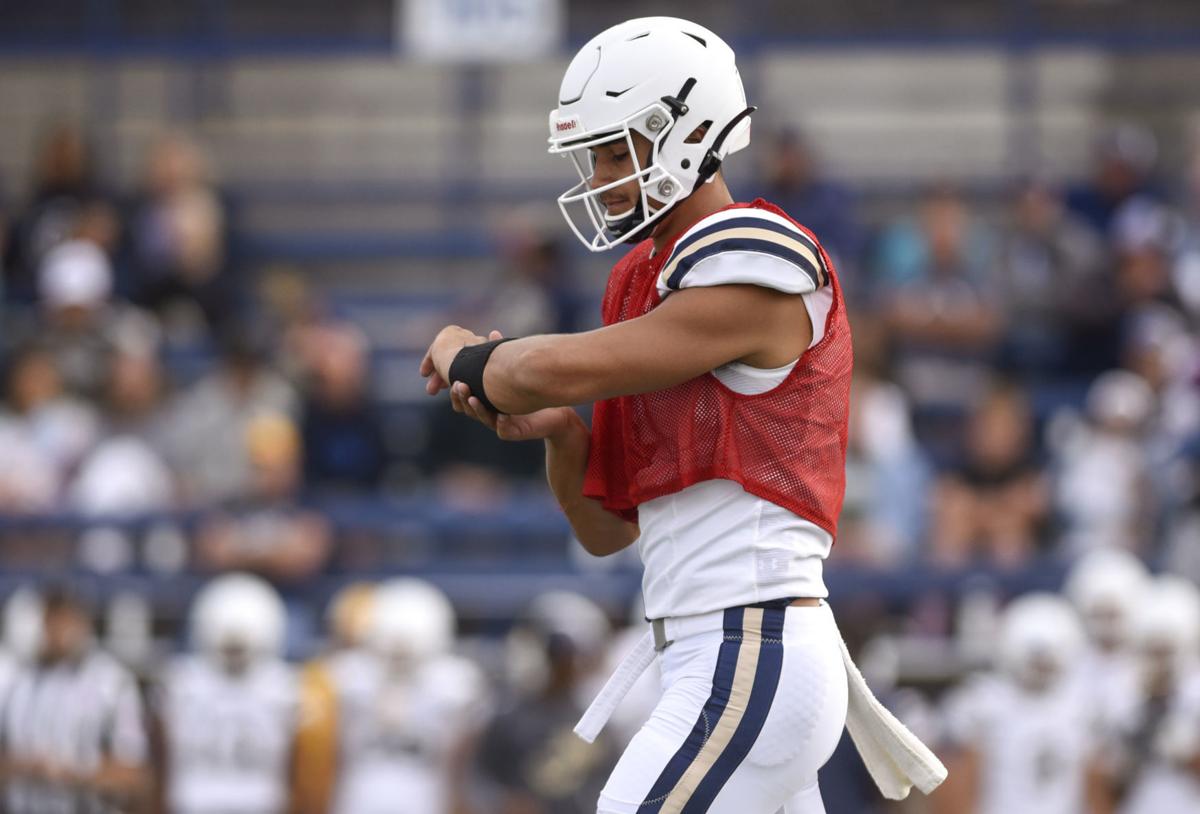 Montana State quarterback Casey Bauman prepares for the next play during a scrimmage on Aug. 17 at Bobcat Stadium.

Before becoming Montana State’s offensive coordinator, Justin Udy studied as much as he conceivably could.

As an assistant at Utah State and then at Texas Tech, Udy grasped how to develop players, handle game preparation and collaborate with others on a coaching staff.

He also believes he’s learned how to work with maturing quarterbacks. That skill will be especially imperative in his first year coaching the Bobcats’ signal callers.

“Developing the quarterback is just a consistent thing you can’t let up on,” Udy said.

Two who started games at MSU last season and another FBS transfer are vying for the starting role. Udy noticed all three bring different talents and are at different points in their careers.

Tucker Rovig, now going into his fourth year with the team, has gained a feel for MSU’s offensive schemes. He knows where the ball needs to go and when it needs to be there, Udy said. After an up-and-down 2019, Rovig has continued to work this offseason with hopes of advancing his skills and solidifying his place as the starter.

Casey Bauman, a redshirt freshman last season, was MSU’s opening-day starter but eventually lost his role to Rovig. While Udy pointed out Bauman has “a huge arm and can make all the throws,” he also needs to become more consistent.

NC State transfer Matthew McKay, who has two years of eligibility left, worked in a similar offense to MSU’s which has led to an easier transition. He’s developed relationships with his teammates quickly as well. Udy lauded him for his intelligence and decisive decision making.

“I would like to see our position group be one of those leaders within our offense,” Udy said. “I think it has to be. They’ve done everything that I’ve asked them to and it certainly is progressing toward being that for next season.”

Udy will likely have to call plays differently depending on who is at quarterback because each passer has different strengths. So he has to concoct offensive schemes and situations where each can be successful.

MSU passing game coordinator Erik Frazier noted Udy has added some wrinkles to MSU’s run-first offense. He would’ve loved to watch the Bobcat quarterbacks run through new plays with their teammates during spring practices, which were called off due to coronavirus concerns.

That’s why each QB has been especially engaged during virtual meetings, Frazier said. They want to learn as much as they can so that when they do play — whenever that may be in the wake of the pandemic — they are settled in and ready.

Frazier said Udy’s changes to the offense are intended to create more explosive plays through the air. In order to become more dynamic, Frazier added, the Bobcats will have to be more efficient. That’s more easily possible with a dependable quarterback who is most comfortable in the system.

“Just finding more ways to make it easier for the QBs,” Frazier said. “Allow our athletes to be out in space and make plays and get the ball in their hands in different ways. Utilizing our personnel as efficiently as we can.”

MSU head coach Jeff Choate has often remarked how unimportant spring practices can be in the ultimate outcome of a season. But he did admit the Bobcats’ quarterback battle could’ve unfolded at an easier rate had those practices not been canceled.

The Bobcats began running volunteer player-run practices last week. Choate has said this is maybe the most important time for those in position battles to separate themselves.

Choate noted how he asked Kevin Kassis, a senior team captain last year, how those practices were going when Bauman and Rovig were vying to become the starter in 2019.

“You don’t get any rings or trophies for spring time anyway,” Choate said, “so let’s have it play out in the fall.”

As has been the case with QB battles during Choate’s tenure, MSU’s signal callers will earn that starting spot when they gain the faith of their teammates.

Udy said watching the Bobcats’ position battle was refreshing. The quarterbacks have acted professional in their approach by showing up to virtual meetings on time, handling their schoolwork and emotionally supporting their teammates.

Udy said his passers have led the team by the examples they’ve set. McKay, Bauman and Rovig have done that by building bonds with their peers and showing they can be relied on.

“They’re going to play hard for a guy they trust,” Udy said. “I know all of those guys are working really, really hard right now to make sure everybody (on the team) understands they want to be their quarterback. That’s important to me, and I know it’s important to them.”

The Bobcats can begin team activities in July and practices on Aug. 7. Udy is eager to watch how his QBs develop and compete.

“All three are very, very talented,” Udy said. “You couldn’t ask for a better situation.”