Montana State's Brayden Konkol attempts to intercept a pass during the FCS quarterfinals against Austin Peay in December at Bobcat Stadium. 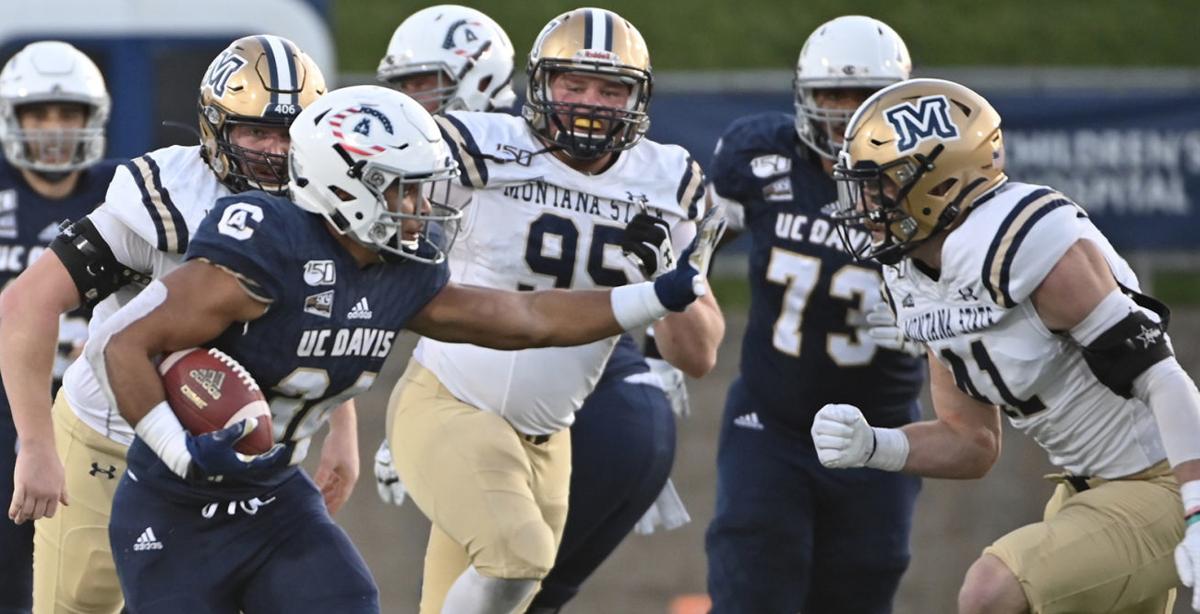 After landing in Hawaii and reaching his hotel, Brayden Konkol promptly began speaking with professional scouts. They made him feel wanted, like he already belonged in the NFL.

Konkol constantly watched ESPN and NFL Network while growing up in Belgrade. He consistently checked for scores and updates on his favorite players. Some day, he hoped, he would be the one national media would be talking about.

“Dang, this is pretty sweet,” the former Montana State safety thought to himself.

Shortly after arriving for his trip to play in the Hula Bowl, Konkol came to a realization. He was far from the only one talking to these scouts, and they were probably telling the other players the same things he heard. Konkol also began to think Ryan was in Hawaii more for vacation than anything by the way he acted.

Konkol needed to humble himself for a moment. As an FCS player, he knew he still had more to prove.

The MSU all-American hopes he has displayed enough potential to earn a shot with an NFL team as the league prepares for the NFL Draft on Thursday.

MSU defensive coordinator and four-time all-American safety Kane Ioane said during the 2019 season that he believed there was “no question” Konkol had a future in the pros because of his measurables and physicality he showed during his career.

“He’s got a desire, and that is such a big part of it,” Ioane said. “He’s willing to work and do whatever it takes to at least give himself a chance.”

Konkol not only showed physicality, but he displayed athleticism and versatility at MSU.

He was an all-Big Sky honorable mention as a junior after playing linebacker and safety and leading the team in tackles with 93. Then as a senior, he became a second-team all-American as he fueled the Bobcats’ defense which catapulted them to the FCS semifinals.

“I think that helps a ton especially in today’s game,” Konkol said of his all-around skill. “The more versatile you are, the more reason you have to be on the field and the less amount of reasons coaches have to take you off.”

Bobcats head coach Jeff Choate called Konkol one of the best open-field tacklers in the Big Sky, giving him a key skill for a linebacker. Choate praised Konkol because he could play anywhere within a defense beyond the first level up front.

And Konkol said he had the fastest 40-yard time on the team last offseason, showing he has the speed to keep up with receivers.

“He’s a better cover guy than people think,” Choate said last season. “Does a nice job in coverage, and he’s got that linebacker mentality.”

Konkol began preparing for MSU’s pro day as soon as the Bobcats’ season was over. He drove to Denver to train at Landow Performance, a facility run by Denver Broncos head strength and conditioning coach Loren Landow where NFL stars like Christian McCaffrey have worked out. Konkol had heard about it from his agent, who had also worked with former MSU star JP Flynn.

Konkol felt the workouts were easier than in college, but that was by design. He rarely was trying to max out on bench presses or squats. The work, with two sessions per day, was technical and didn’t require many repetitions to avoid overfatigue before the pro day.

Konkol’s plans were altered by the coronavirus pandemic. He planned to train from early January to March 27, but his workouts were cut off a week short as gyms were closed up.

He still managed to go through the pro day drills at Landow. At 6-foot-2, 214 pounds, Konkol’s 20-yard shuttle (4.17 seconds) and three-cone drill (6.9 seconds) would’ve been fourth at his position at the NFL Combine, which features the best college players in the country. His 37-inch vertical would’ve tied for fifth, his 10-6 broad jump would’ve been seventh and his 4.53 seconds in the 40-yard dash would’ve tied for ninth.

As satisfied as he was, Konkol wishes he could’ve shown his athleticism to a group of scouts in person. He’s talked to about nine teams, including the Los Angeles Chargers earlier this month. Konkol believes he could play linebacker, safety or as a pro team’s ace on special teams — something Choate emphasized with the Bobcats as a former special teams coordinator — after playing there all four years at MSU.

Konkol also spoke of the work ethic he would bring, which Ioane brought up during the 2019 season. Konkol reached his level of success, Ioane said, by the way he constantly tried to improve by watching film and practicing with focus.

“You just talk about fire and passion and just an intensity that is not matched by anyone else when it comes to game day. He’s a guy that literally would fight me if he had to,” Ioane joked. “He’s the ultimate competitor.”

Whether Konkol’s drafted late doesn’t matter much to him. In fact, he would rather be undrafted and pick where he tries out than be taken in the later rounds.

That way he can find the best situation for himself and can have the best shot at making his childhood hopes reality.

“It would be cool to get drafted and everything like that, but the goal isn’t to get drafted. The goal is to play in the NFL,” Konkol said. “It doesn’t really matter how you get there just as long as you take advantage of your opportunity. It would for sure be a dream come true.”