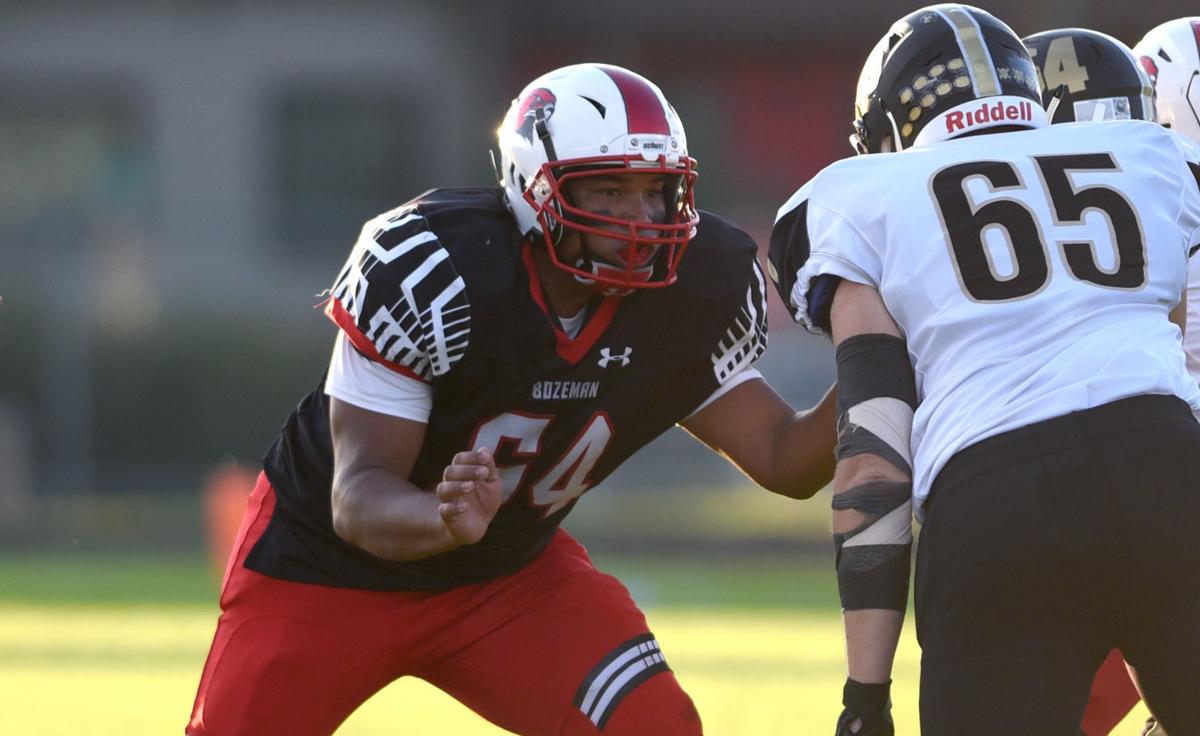 Justus Perkins prepares to block against Billings West during a 2018 conference clash at Bozeman High. 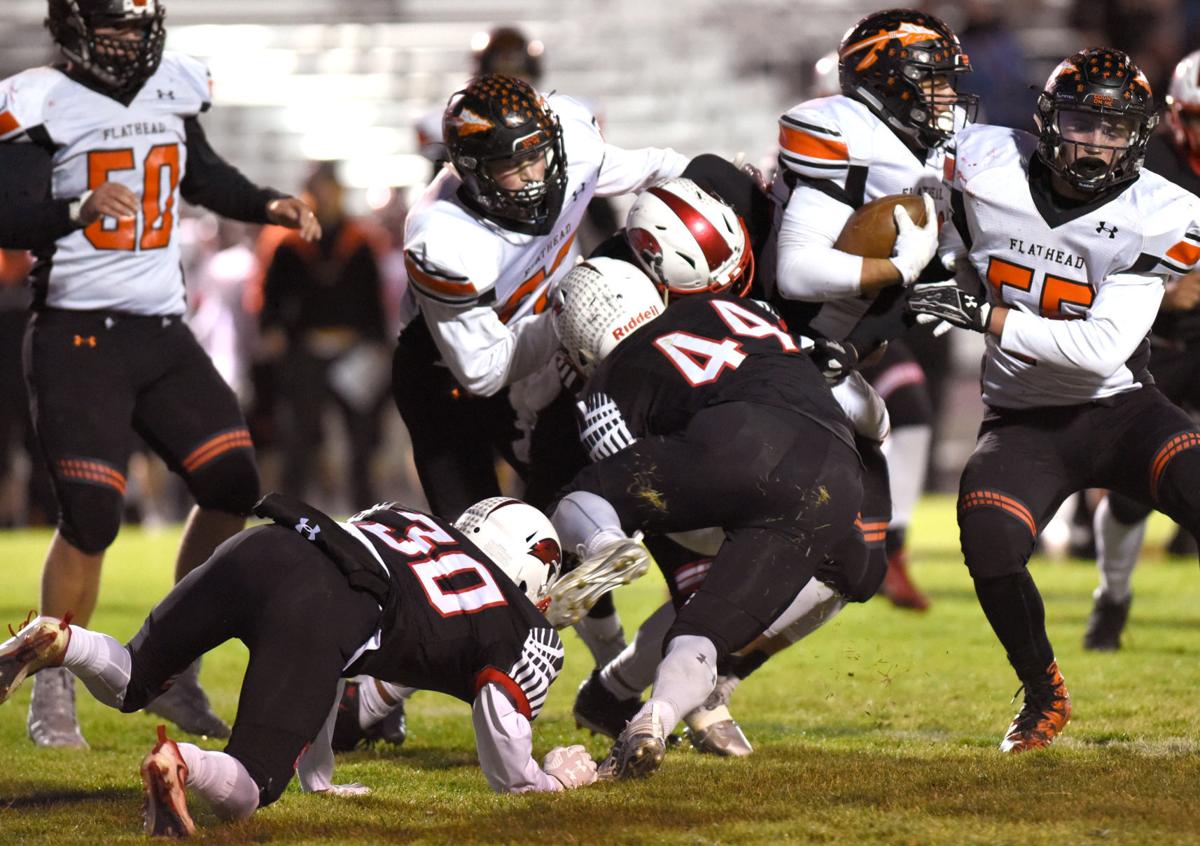 Justus Perkins prepares to block against Billings West during a 2018 conference clash at Bozeman High.

Editor’s note: This is the second of a two-part story about Josh Perkins and his son, Justus, who have both played football at Montana State. The first part published July 23.

Josh Perkins has always tried to keep community involvement and his family as priorities.

The former Montana State football player has maintained his focus on what had kept he and his wife, Nola, in Bozeman for all these years. He has coached his sons in YMCA and Lions Club football and become involved in his children’s schools.

Those opportunities created an environment which allowed Justus Perkins, now a redshirt freshman with MSU, to thrive. Active in school-related sports throughout his life, summers became about family time.

In addition to drawing the focus back to the family, Josh Perkins said it allowed he and Nola to expose the children to the diversity not always apparent in Bozeman.

“We’d take them different places. We’d do the Bahamas, we’d do Hawaii, we’d do Florida,” he said “So they could be around different (cultures). Let’s try some Cuban food, let’s try some this or that, just to see all that’s out there.”

By avoiding commitment to the youth sports circuit in the summer, Josh Perkins feels Justus is peaking at the right time.

“That’s why I’m so happy and proud of him, because we did it my way and I think the right way,” Josh said, “and he ended up playing sports in college.”

Justus enjoyed a productive football career at Bozeman High.Lance Mackay, one of the program’s coaches, praised the undersized lineman.

“Justus was a great kid and a hard worker who kept his nose clean,” Mackay said. “He was a very vocal leader, and super coachable for me.”

“Hard worker,” Choate said of the characteristic that most defined Justus Perkins’ first year in the Bobcat program. “He’s a total grinder. When you watched him play in high school, all he did was put people on their backs. He’s not going to wow you when he walks through the door with his measurables, but he sure wows you with how he goes about his business, whether it’s in the classroom, between the white lines on the football field, or in the weight room.”

“He was a kid from California, growing up in a one-parent household, his journey was a lot greater than mine. That’s why I had so much respect for him,” Justus said. “He put in so much hard work. He was dedicated to it, so I’m appreciative. He gave me that competitive spirit so I’ve upheld it and trust the process.”

The younger Perkins carries some of the same physical traits as his father. Rather than restricting him, it provides motivation.

“I’m an undersized offensive lineman, but I don’t look at it as something that can stop me,” he said. “Anything is possible with hard work and effort. My dad was undersized, so I take it as it is what it is. I’m always going to work. Whether I’m 6-6 or 5-8, I’m going to work hard.”

Justus admits that he hasn’t heard much about his father’s football career. But he does know a story told by one of Josh’s teammates.

“It was a Cat-Griz game, it was a goal-line stop, and one of his teammates brought it up,” Justus said. “I actually saw the video of it a couple years ago. My dad comes off the edge, jumps over a chop block, punches the ball out, fumble, Bobcats recover. Seeing it was like, Wow, crazy.”

Josh Perkins was a fine player for the Bobcats. He was the team’s nickelback for much of his career not because of shortcomings as a corner but because of the flexibility it provided.

“He was obviously athletic enough to play in the secondary, but he was also physical enough to play linebacker,” said Butch Damberger, MSU’s secondary coach for Perkins’ final two seasons.

Damberger said Perkins was also physical enough to defend the run game, which allowed the Bobcats to play him “as our (weakside) linebacker against spread teams. He could play linebacker when we played zone coverage and he did fine. Or we could walk him up and play man instead of sneaking a linebacker out there to cover a receiver. We could play nickel in our different coverages, but we could keep him on the field on run downs. He gave us a lot of flexibility.”

Like so many, Damberger’s primary recollection of Perkins relates to his personality.

“Josh’s outgoing and friendly personality that you see now is the same way he was when he was on the team,” Damberger said. “That hasn’t changed.”

Josh Perkins played with joy and effervescence that many remember, but that isn’t necessarily a trait he handed down. Justus feels it relates more to his position.

“My dad played corner, secondary, and they’re known to talk,” he said. “Offensive linemen, we don’t get the spotlight as much. When we do, we try to enjoy it as much as possible. I try to make sure that when people look back on film they’ll see I give 100% effort all the time. When I do talk smack, it’s nothing crazy. I try to let my game do the talking.”

For all the good things Perkins has brought to Bozeman, he’s also served as an important conduit between former teammates and their school.

“I’ve been here since ‘96. I know everybody that’s passed through,” he said. “I’m ‘the brother that stayed.’ That’s what they call me, so everybody reaches out to me when they come back into town or when they’re thinking about coming back, and I happily accept that.”

Choate has long admired Perkins’ commitment to Bobcat football and willingness to help anyone in need.

“Since the time that I first got here, he’s been a guy that has a strong connection to the program and takes a lot of pride in the opportunity that was presented to him here at Montana State,” Choate said. “He’s very dialed in to giving back, whether that’s to his community back in California, this program here at Montana State, or our community of Bozeman.”

Josh Perkins’ instinct for tangible displays of gratitude was instilled in him by his mother, Verniel, who raised him alone.

“My mom had me at an early age. She was only 17, but she finished high school, she went to junior college, and she’s a dental assistant now,” he said. “Her thing was giving back. When I was young, I had to do a lot of charitable events. I’d always go clean up the park, always go clean up the beach. She always had me volunteering.

Choate sees the same determination in Justus Perkins’ life as a student-athlete that he sees in his father’s business dealings.

“You can see those characteristics in Justus,” Choate said. “When he’s in the weight room, he’s all about that, but that’s not going to impact his performance in the classroom or his ability to hang out with his younger brothers and be a great mentor to them, or to perform between the white lines.”

Justus Perkins, also a business major at MSU, hopes that he can tap into his father’s vein of business savvy, amplify it with his own work ethic, and make it eventually pay off.

“I definitely feel like, watching my dad do what he does, that he was born for it,” the younger Perkins said. “It comes naturally to him. I don’t know what I want to do in the business world yet. Hopefully I can find that in the next couple of years.”

For now, the next couple of years will involve Perkins contributing to the development of the Bobcat football program. He figures into an apprenticeship role early in his career, contributing on special teams, while battling for time on an offensive line that Choate says he wants to “get old and stay old,” emphasizing experience.

If time has taught any lessons, it’s that staying power at MSU is a powerful force.

“I’m grateful for the opportunities,” Josh Perkins said simply, a gratitude so many reciprocate.