DeNarius McGhee, seen here in 2012, threw for the most yards and touchdowns in MSU history and led the Bobcats to shares of three Big Sky titles. 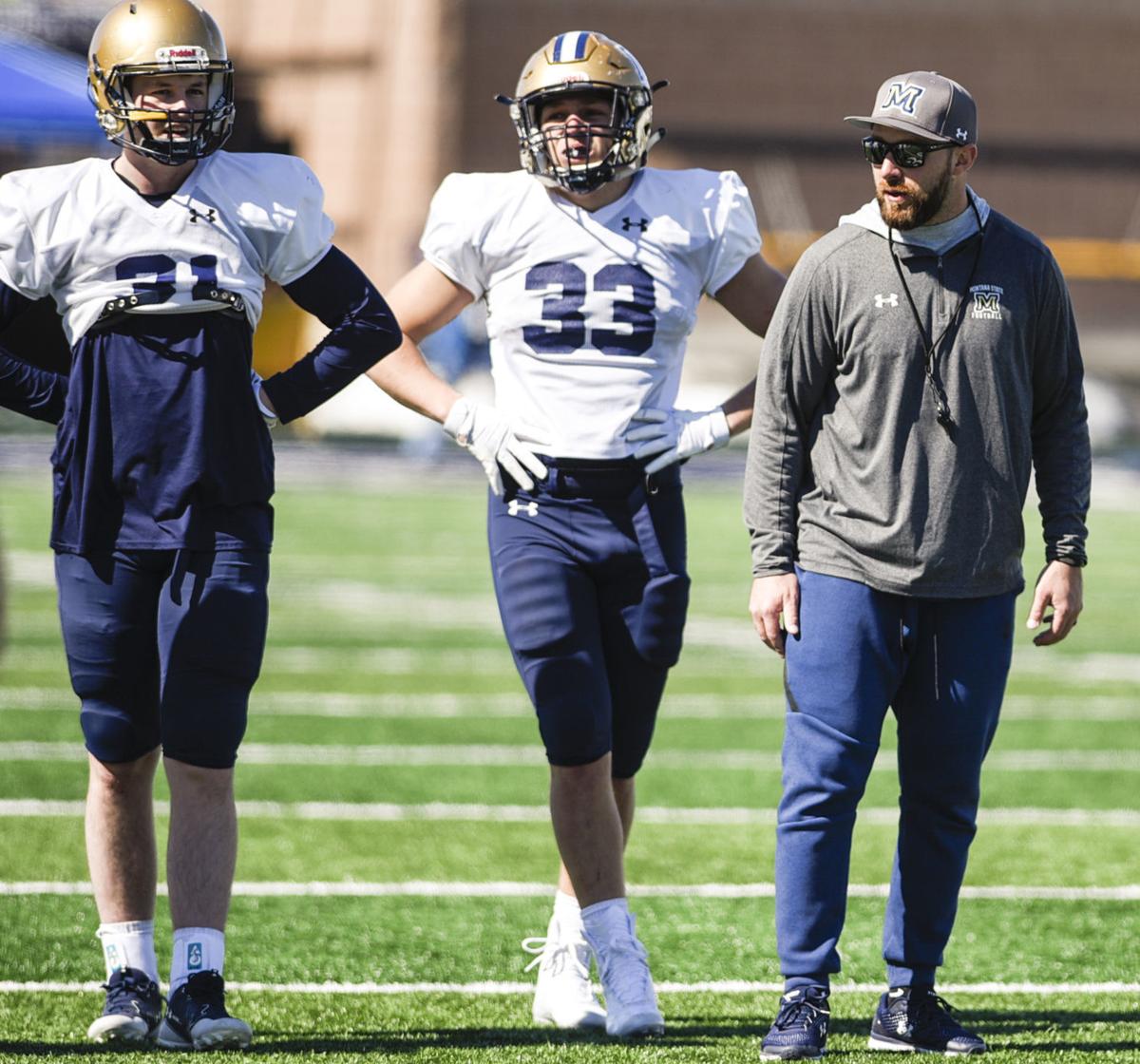 Former Bobcats star DeNarius McGhee, seen at top celebrating during last year’s Brawl of the Wild and above during his playing days, has returned to his alma mater to help tutor running backs. 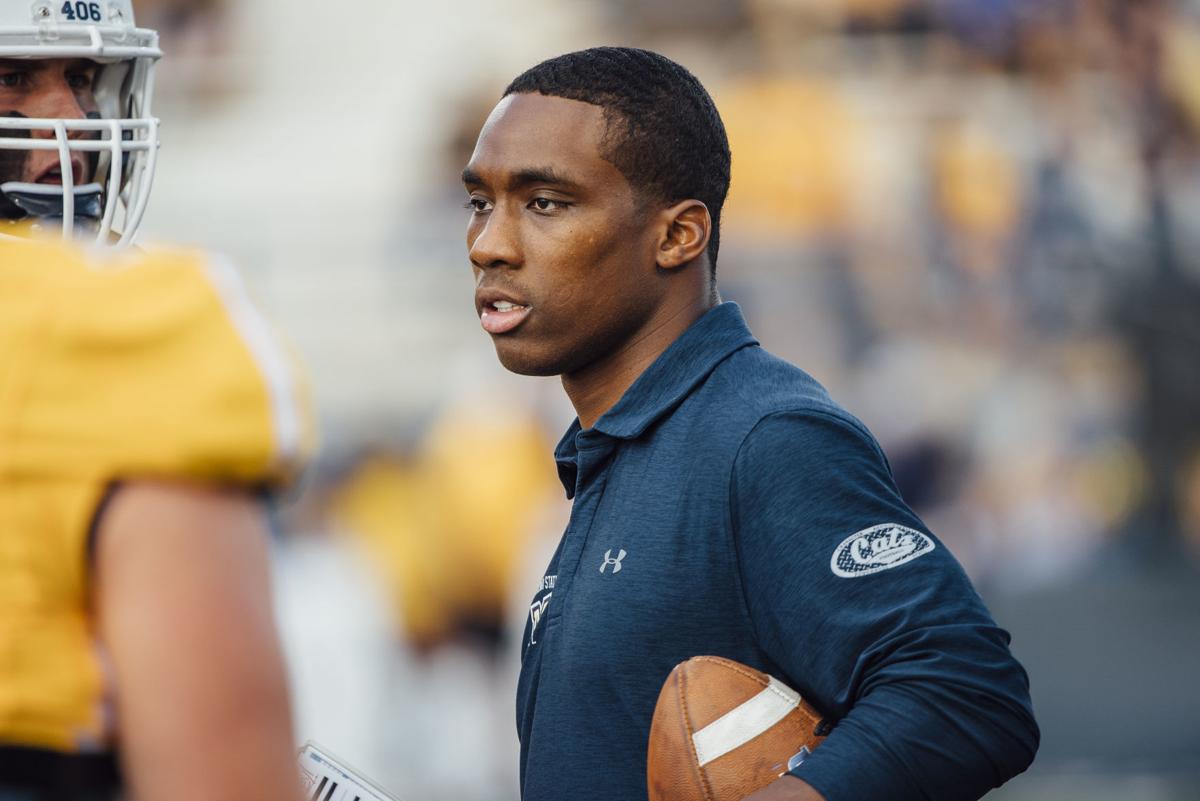 DeNarius McGhee, who spent one season as the quarterbacks coach at his alma mater, now is tutoring Montana State’s running backs. 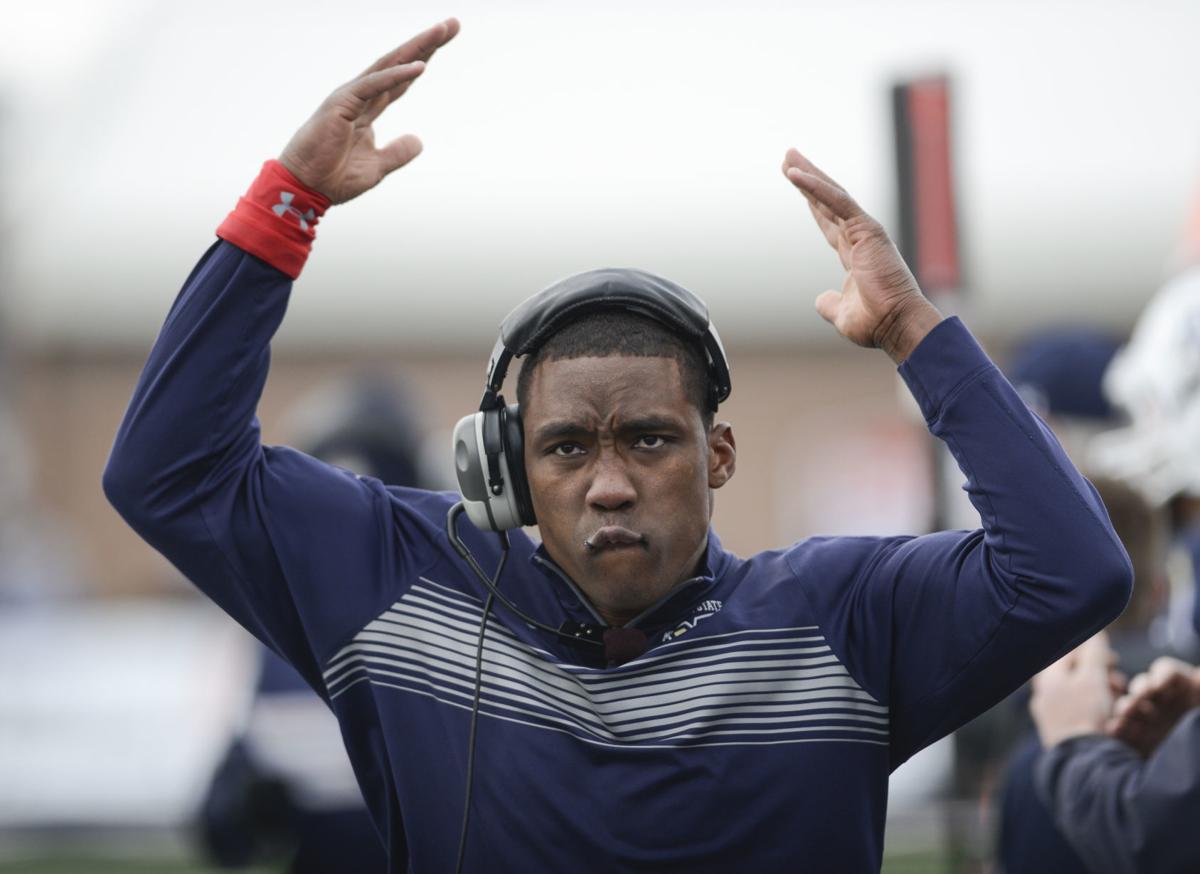 DeNarius McGhee, seen here in 2012, threw for the most yards and touchdowns in MSU history and led the Bobcats to shares of three Big Sky titles.

Former Bobcats star DeNarius McGhee, seen at top celebrating during last year’s Brawl of the Wild and above during his playing days, has returned to his alma mater to help tutor running backs.

DeNarius McGhee, who spent one season as the quarterbacks coach at his alma mater, now is tutoring Montana State’s running backs.

Montana State had gone 0-11 when he was a freshman in 2000. The following year, the Bobcats lost their 16th straight game to Montana. But at that point, Ioane sensed confidence building in his team. Throughout the 2002 season, he knew momentum was on MSU’s side the week of the ’Cat-Griz matchup.

Ioane, an all-American safety who grew up in Billings, only cared about how he prepared for MSU’s bitter rival. The build up and hype outside of the program were for fans, alumni and everyone else.

Because of that focus, the Bobcats went to Missoula self-assured. They braved the blistering cold elements of Washington-Grizzly Stadium and snapped “The Streak.”

He’s happy he doesn’t have to hear about Montana’s streak of consecutive wins anymore. But Ioane’s experiences put him in an advantageous position now as MSU’s defensive coordinator.

He is one of three Bobcats assistant coaches who have participated in the rivalry game, which will be played again at noon Saturday at Bobcat Stadium for the 119th time. As their stories and experiences prove, they are capable of handling the intensity of the rivalry week. Therefore, they are among the best people suited to prepare the Bobcats for what lies ahead.

So much hinges on the game. It dictates not just the path of the season but affects the programs’ futures.

When Ioane was playing, he felt finally defeating the Grizzlies, and then again in 2003, set MSU on the right track. That could be the case again this week.

“I’ve been to the Texas-Oklahoma game, and there’s a lot of people there. But the intensity of the game does not compare to what we have here,” MSU running backs coach and former quarterback DeNarius McGhee said. “And I know I’m saying a lot. That was a very bold statement. But the things that happen in this game and the amount of intensity and hatred that the two teams have for one another or the two fan bases have for one another is something special and one you don’t get anywhere in the country.”

Ioane, McGhee and MSU linebackers coach Bobby Daly, a former Bobcats linebacker himself, fully know the animosity that goes into the game.

McGhee said batteries have been thrown and beer poured on players, among other things he didn’t want to mention.

“The fans in this rivalry don't get along, and their fans absolutely hate our guts,” McGhee said. “They hate our players. They highly dislike the Bobcats.”

Daly’s father and brother were all-Americans for MSU. He went to ’Cat-Griz games with family. Growing up among Grizzly fans in Helena, he heard plenty about “The Streak” or anything Montana did well. But when the Bobcats finally won, Daly felt the same way Ioane did, that MSU was on the rise.

“It was a turning point for our program,” Daly said.

As a senior in high school when he was being recruited, Daly watched the Bobcats return the opening kickoff for a touchdown as they beat the Grizzlies in Ioane’s senior season. He watched cops chase mischievous fans around after the game and fully realized the importance it has to Montanans if he were to ever play in it.

Even when he was participating, Daly said his friends who rooted for the Grizzlies were not happy for him. But he understood because the feeling was mutual if he lost. As a freshman at MSU, he experienced the taste of victory that would allude him for the rest of his career against the Grizzlies.

“We tore down goal posts, everybody was hauling them downtown,” Daly said. “It was an awesome time.”

When McGhee was being recruited in the late 2000s, part of the selling pitch to him going to MSU was the opportunity to play against and defeat the Grizzlies as a freshman. The Bobcats hadn’t won the matchup for a few years. McGhee couldn’t pass up on the challenge.

His favorite memory as a Bobcat was his freshman year in 2010. He can still recall specific plays from that close 21-16 contest that cliched a share of the Big Sky championship. He recalled hitting Tanner Bleskin on a naked bootleg pass in the corner of the end zone. He also remembered Montana’s Chase Reynolds breaking off a long touchdown run on the following drive.

McGhee is from Mississippi but played high school in Texas where he described football as “God.” So he thought the rivalry would be manageable. He didn’t fully realize the intensity of the ’Cat-Griz game until he played in it.

He laughed when he began reflecting on his experience.

“It’s a big deal. I can’t even really put it into words,” McGhee said. “I’m a little speechless with some of this because the experience is so overwhelming especially if you’ve never been a part of something so big.”

The moment he knew he was going to become a Bobcat, Ioane wanted to beat the Grizzlies. The first time he played in the rivalry game, failure. The next try, failure.

With each season, winning that one time became more and more important.

“No matter how the season is going, you always keep an eye on that game because you know how important the result of that game is,” Ioane said.

He felt the rivalry and “The Streak” pushed the team to become better. The Bobcats wanted to avoid the excruciating pain of losing once again.

In 2002, even with a sense of belief, the challenges of the game remained the same. Ioane knew Montana fans would do their homework and would know names of players’ siblings and parents as they yelled from the stands. They were prepared to make it personal.

But Ioane was fine with it. The competitor in him may have needed a little extra motivation to prove to those fans in Missoula his team was better.

“When you can point up at the scoreboard and you can say, ‘What else you got for me? Because look at the scoreboard,’” Ioane said. “Then when the final minutes and seconds tick away with that score, the silence is absolutely deafening. All you hear is the Bobcat fans who made the trip over to Missoula, and they’re screaming and yelling and trying to jump over the railing trying to celebrate with you.

“You talk about memories. That particular memory will never go away.”

Now, Ioane, Daly and McGhee have to ensure their players are ready for the stress, gravity, exhilaration, conflict and old-fashioned pain they went through. When asked if he has to act like more of an adult now, Ioane said “100%” with a laugh. He admitted he might’ve been in trouble if social media was as prevalent when he was a player as it is today.

McGhee feels no other rivalry except for maybe Alabama-Auburn can compare to ’Cat-Griz. He said he learned how to prepare his players for vital games like those from MSU head coach Jeff Choate, who is undefeated against Montana in three matchups.

McGhee is aware how much trash talk goes on. With that much animosity, there’s going to be chatter. But McGhee wants to make sure that talk doesn’t affect his team’s play. As he said, 15-yard penalties can be beneficial or detrimental depending which team handles the extracurricular activity more productively.

Ioane wants his players to fully understand the historical significance of the rivalry but to also be focused in on the single week of preparation. He and Daly, who are in the first years of their stints coaching at MSU, maintained that no practice time was dedicated during the season to the Grizzlies except for the week of. To Daly, that’s the right way to go about it. He said the players already knew it was looming the minute November began.

The players, especially those from Montana, don’t need any further reminder. Minutes after the Bobcats defeated UC Davis last week, MSU safety Brayden Konkol tweeted “I been waiting 358 days for this week.” But that hype, anticipation and build up, Ioane will remind his players, are for other people to enjoy.

“You really have to make sure you’re focused on the right things,” Ioane said. “As far as the feelings with this thing on game day, those will never go away. I don’t care how long you’ve been away from it or if you’re a player playing in it or a coach, those feelings on game day, those are no different. You wake up that morning like it’s Christmas, and you’re ready to roll.”

The Bobcats must properly prepare and remain honed in despite all of the distractions and noise the game comes with. The responsibility of ensuring that happens is on the coaches like Ioane, Daly and McGhee.

If they do so and they win, that would be the first time the Bobcats have defeated the Grizzlies in four straight games since they did so six consecutive times from 1972-77, which is tied for the most straight MSU wins over Montana.

“Now we can get our own little streak going,” Ioane said.