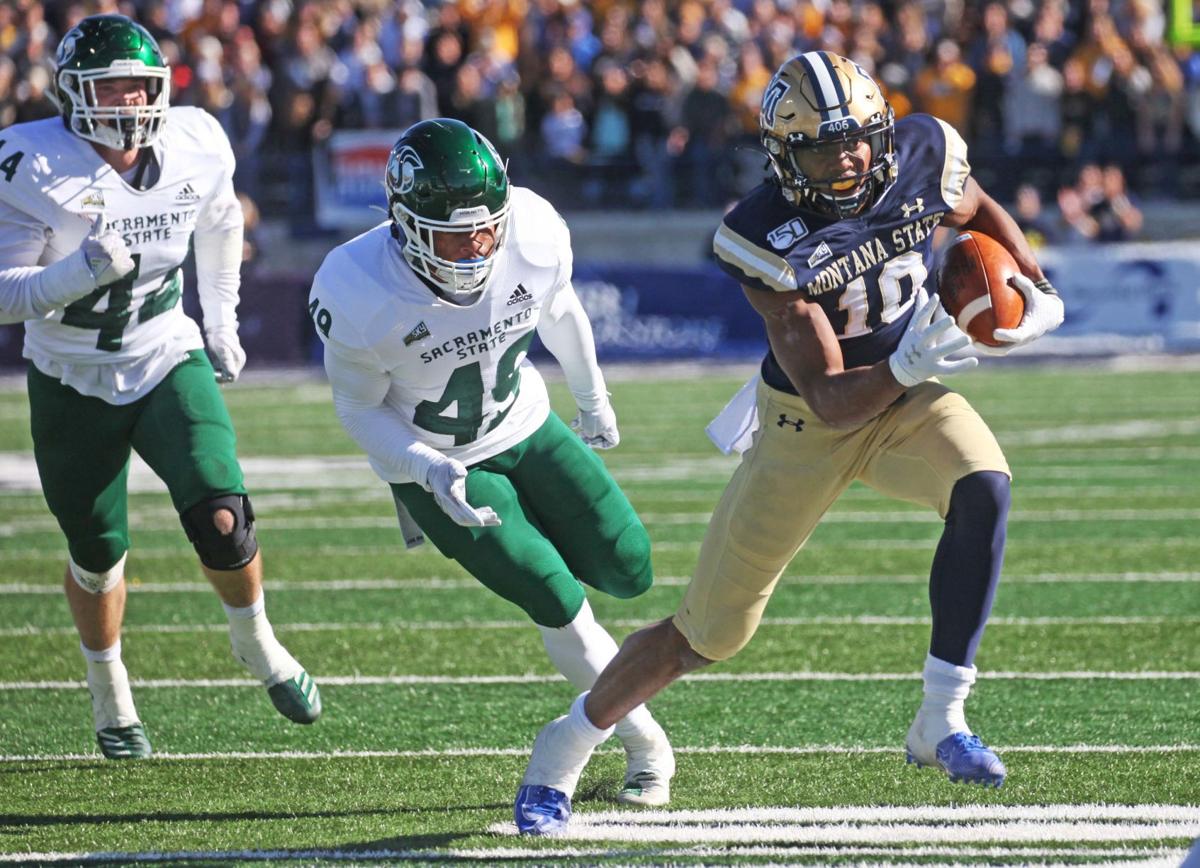 Montana State's Travis Jonsen makes his way to the end zone for a score in the first half against Sacramento State on Saturday at Bobcat Stadium. 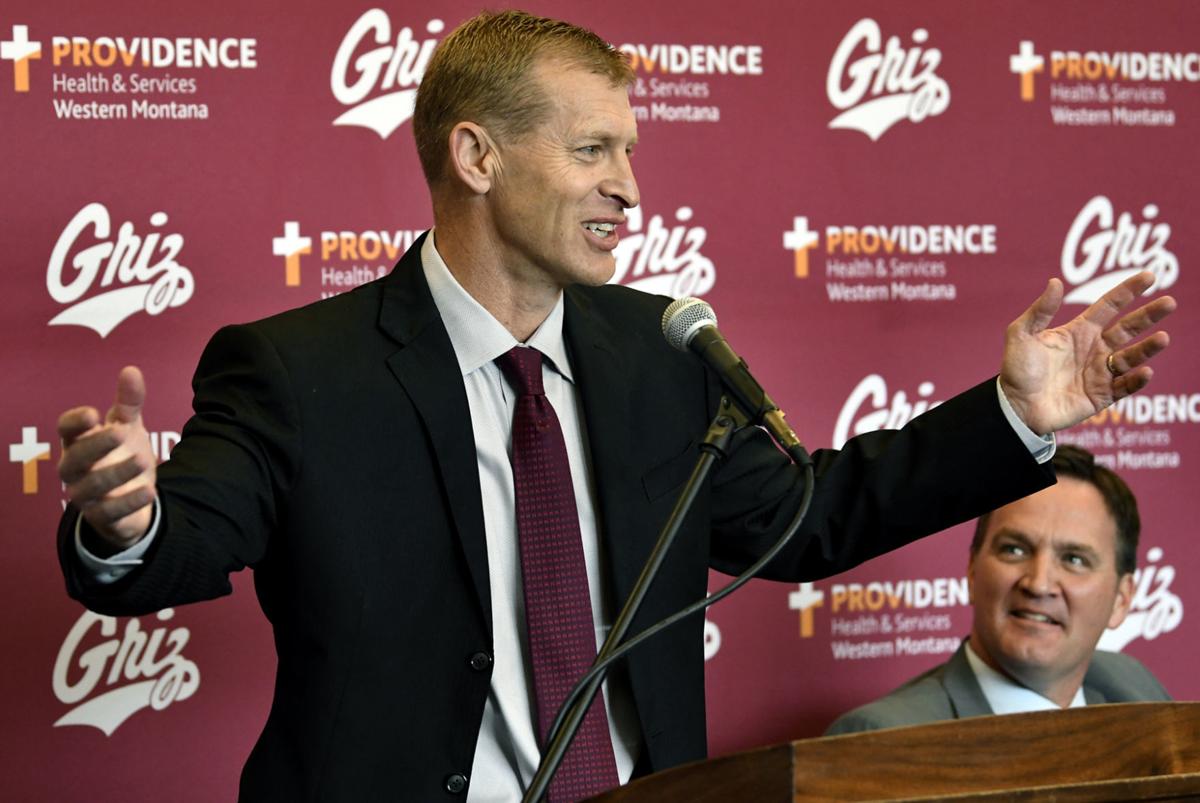 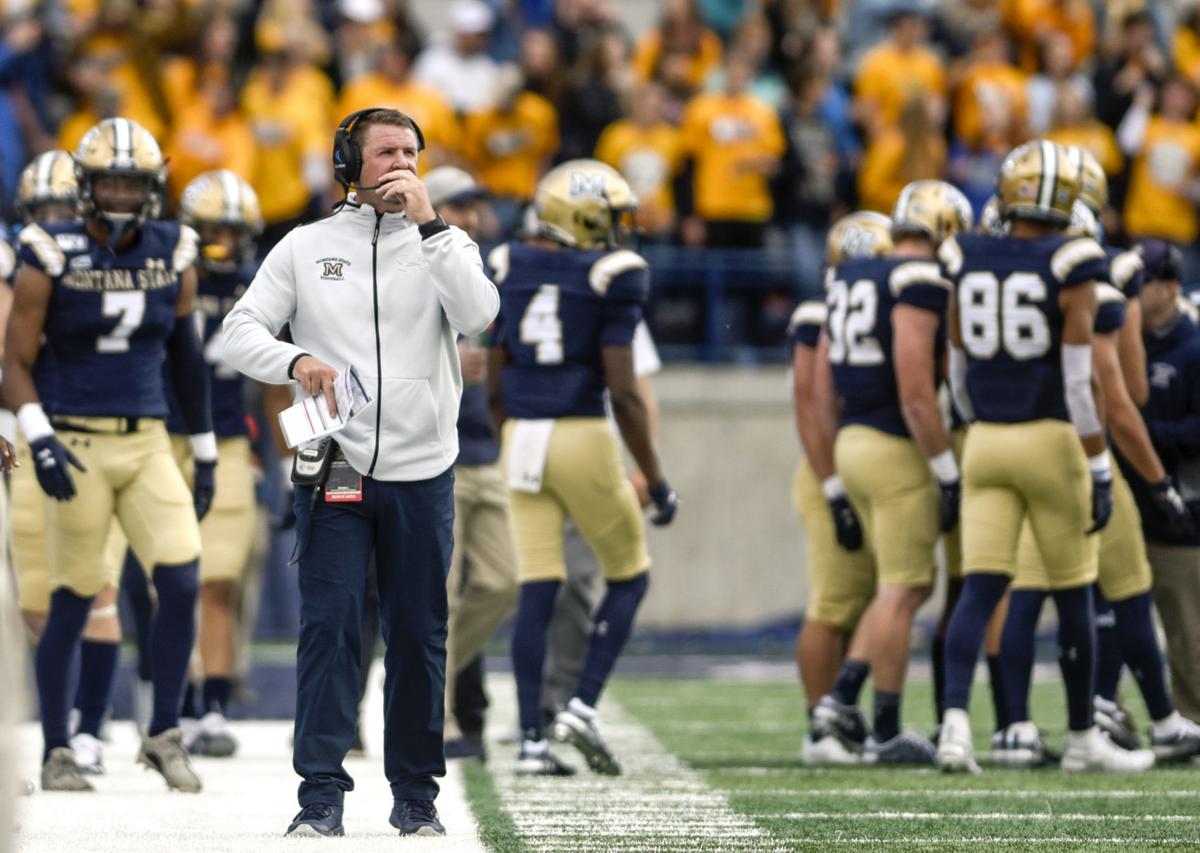 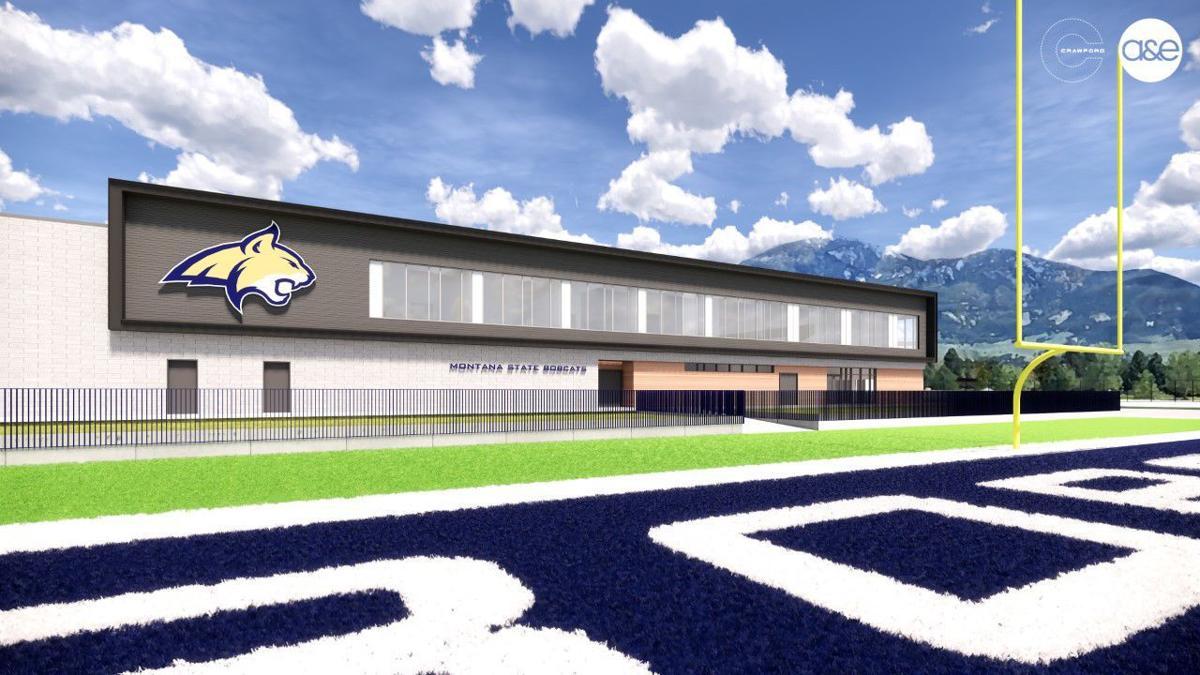 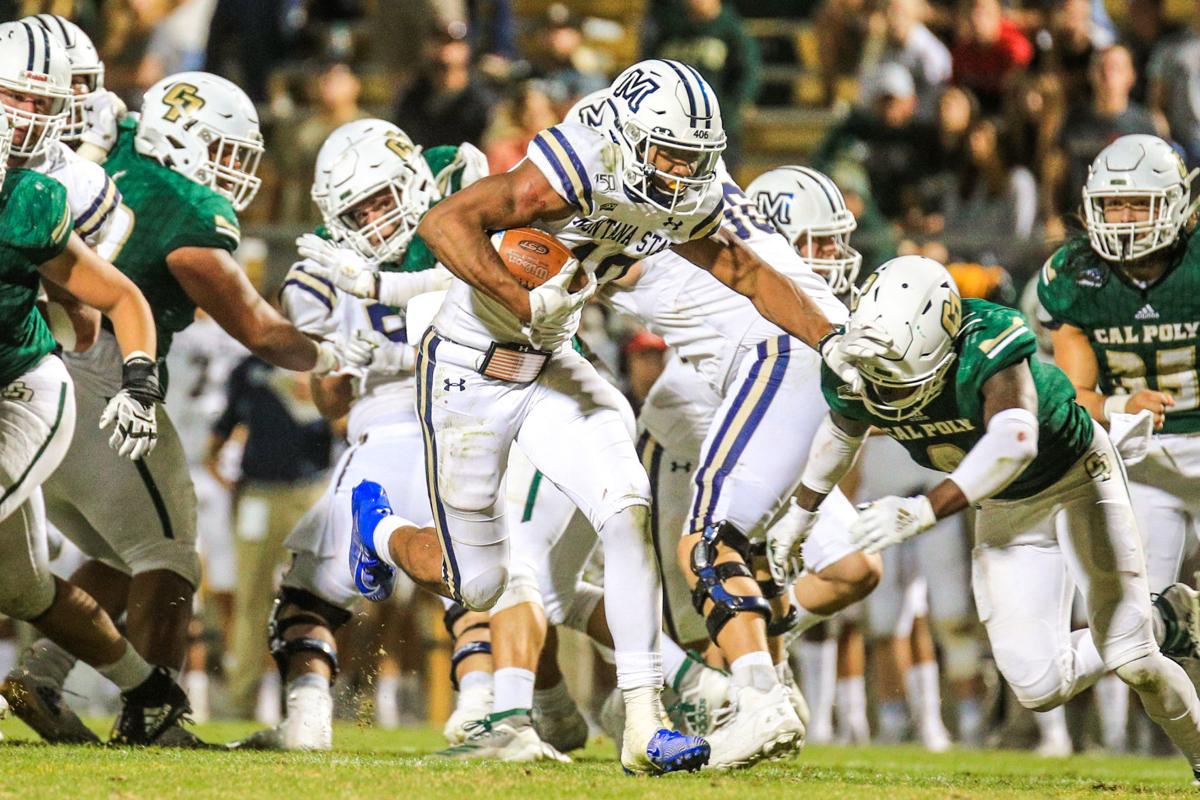 Kitu Humphrey had plenty to consider.

He had scholarship offers from multiple Big Sky programs. The Los Angeles native initially committed to Idaho State. Then he visited Cal Poly.

His education was important to him, as was the scenery of San Luis Obispo, California.

But facilities mattered too. The hope of a new practice location was enticing to him. So he decommitted and is now a senior defensive back with the Mustangs.

“Nothing against Idaho State,” Humphrey said, “it was just more fitting for me at Cal Poly.”

Many Big Sky teams are either in the middle of building, are raising funds for or just completed the building of new facilities. Montana State head coach Jeff Choate called it an arms race in recruiting. University officials in the conference call facilities key in developing athletes.

For the schools that can raise the necessary funds, current coaches and players believe they’re instrumental for the future of their programs.

MSU recently completed its fundraising of $18 million for its new Bobcat Athletics Complex and an academic center in the Brick Breeden Fieldhouse.

Choate often says he wants to focus on what can be controlled on the field. That goes for facilities as well. He can’t control how close Bozeman is to a major city or what majors MSU offers, but he could help with fundraising.

Locker rooms and weight rooms are important to athletes, Choate said, because that’s where they spend most of their time. If they’re going to spend so much effort and energy at some place, they want it to be somewhere enjoyable.

These facilities are basically like a home for college athletes, Choate said. So new ones add to the product coaches sell to recruits. In order for the Bobcats to compete at a high level, MSU saw improved facilities as vital.

“If somebody is looking for a car and they want a new car and all you have is used cars on your lot, they’re going to go to another lot,” Choate said. “Certainly I think it matters tremendously to young people now.”

Those from Big Sky programs usually at least talk about the potential of new construction or renovations.

Even for Idaho, which is building the $51 million Idaho Central Credit Union Arena for basketball, Vandals head coach Paul Petrino believes even that will help in recruiting for his football team. He said he feels good about his facilities, and even if he didn’t, he wouldn’t want to say so. Recruiting takes selling the future of the program, Petrino said, facilities included.

“That’s the way it’s always been everywhere I’ve coached and recruited,” Petrino said. “And that’s probably the way it will be forever.”

Still, even with that, SUU head coach Demario Warren admitted the Thunderbirds can’t compete with the rest of the conference in facilities. If he were Choate, he too would be trying hard to bring in money for facilities. But with limited resources, he figures, why spend it on locker rooms that aren’t going to be as nice as other teams in the conference anyway?

So when recruits visit campus, Warren emphasizes relationships and makes sure they spend time with current players.

“We focus on the things that are our strengths: our environment, lack of distractions, the people in our community,” Warren said. “We have to find guys who fit who we are. We might not get the flashy guys who care about facilities, but we get the guys who fit our program.”

Cal Poly cut the ribbon on Doerr Family Field, a $4.8 million practice facility, in February 2018. Mustangs head coach Tim Walsh called it maybe one of the most impactful additions in the football program’s history.

Additions like that proved to Humphrey his university made a commitment to football. Cal Poly wide receiver J.J. Koski said his coaches are constantly trying to raise funds. But Walsh admitted Cal Poly isn’t at the forefront of Big Sky facilities, either.

“Whether we’re playing in a stadium that fits 150 people or a stadium that only has my parents in the stands, I enjoy playing football. That’s the main thing,” Humphrey said. “Everything that shines isn’t gold. Look at those things, you appreciate them and definitely don’t take them for granted, but if you don’t have them, you love the game and just play football.”

While at the Big Sky media day, Walsh pointed to Weber State head coach Jay Hill and said WSU is the standard of the conference in facilities.

WSU opened the Barbara and Rory Youngberg Football Center in September and cost $16 million, according to KSL.com. The 27,000-square-foot building serves as the main entrance to the stadium and features a new strength and conditioning facility, football locker room, expanded equipment room, football coaches offices and position group meeting rooms.

And that’s just one of multiple buildings WSU’s opened in the last decade.

Hill believes the Wildcats have the best facilities in the conference. Everyone else is just trying to catch up, he added.

And so far, it’s translated. WSU is one of the most successful programs in the Big Sky in recent years.

“If you look at what we have compared to the rest of the teams in the league, we’re lucky,” Hill said. “For recruiting, when we get guys on campus, we rarely lose those guys just because they see the difference between where we are and what other people have. It’s good. I’ve just got to get them on campus.”

Grizzlies head football coach Bobby Hauck called it one of the best facilities in the Northwest.

“Being able to take a potential player through our locker room and weight room is pretty eye-opening,” UM linebacker Dante Olson said. “It’s one of the best in the nation, regardless of levels. It’s a huge blessing that we get to work out in it every day.”

Last week, two days before MSU announced it had reached its $18 million in fundraising, Montana made public a $2 million project which includes renovated basketball locker rooms and expanded spaces for coaches and players.

“We’ve got to keep going,” Hauck said. “We need to keep building. Both from a recruiting standpoint and a functionality standpoint, it all matters.”

In July, MSU senior wide receiver Kevin Kassis said he was bummed he won’t use the Bobcat Athletics Complex as a player. Fellow senior Jahque Alleyne wishes he could come back reincarnated just to experience it.

But Kassis recognized its value. He knows the impact a facility upgrade can make for his program and future players.

“Hopefully my kids will be Bobcats,” Kassis said, “and they’ll be able to experience it and let me know how it goes.”

Jeff Choate has no problem criticizing the Big Sky’s set up. The Montana State head coach isn’t the only one.