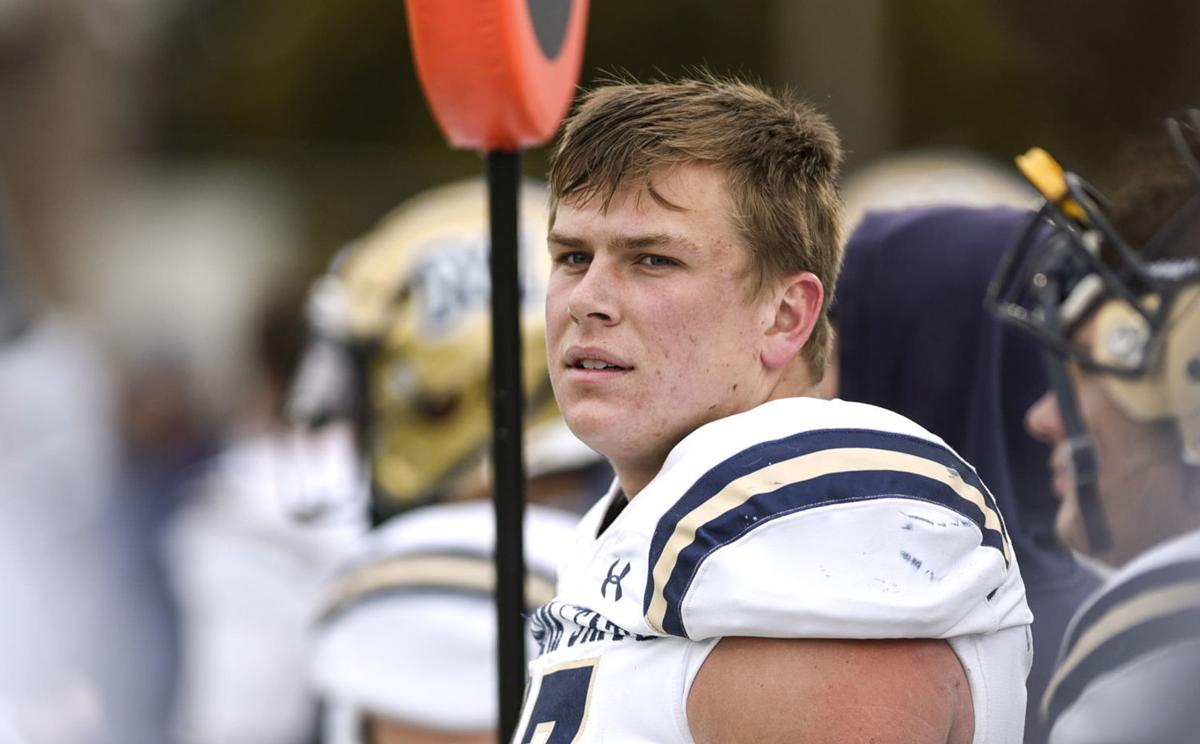 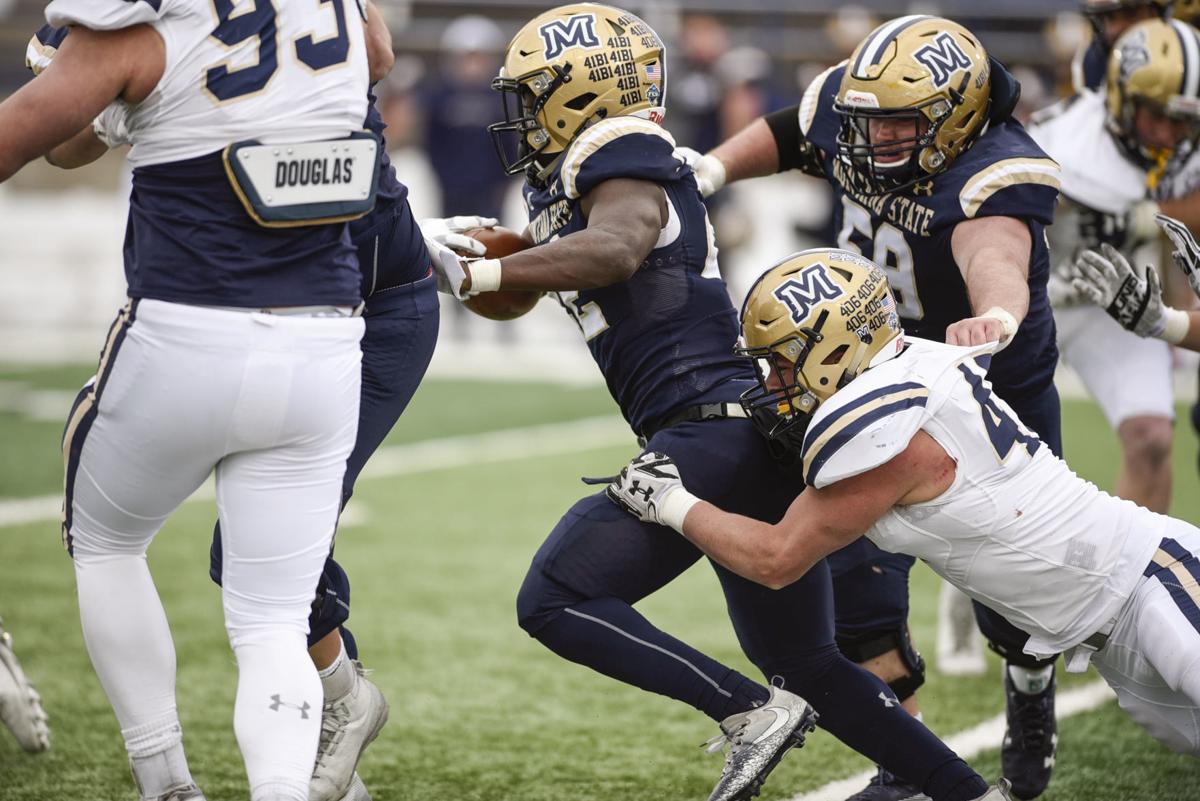 Montana State linebacker Callahan O'Reilly tries to take down running back Isaiah Ifanse during the Sonny Holland Scrimmage on April 6, 2019, at Bobcat Stadium. 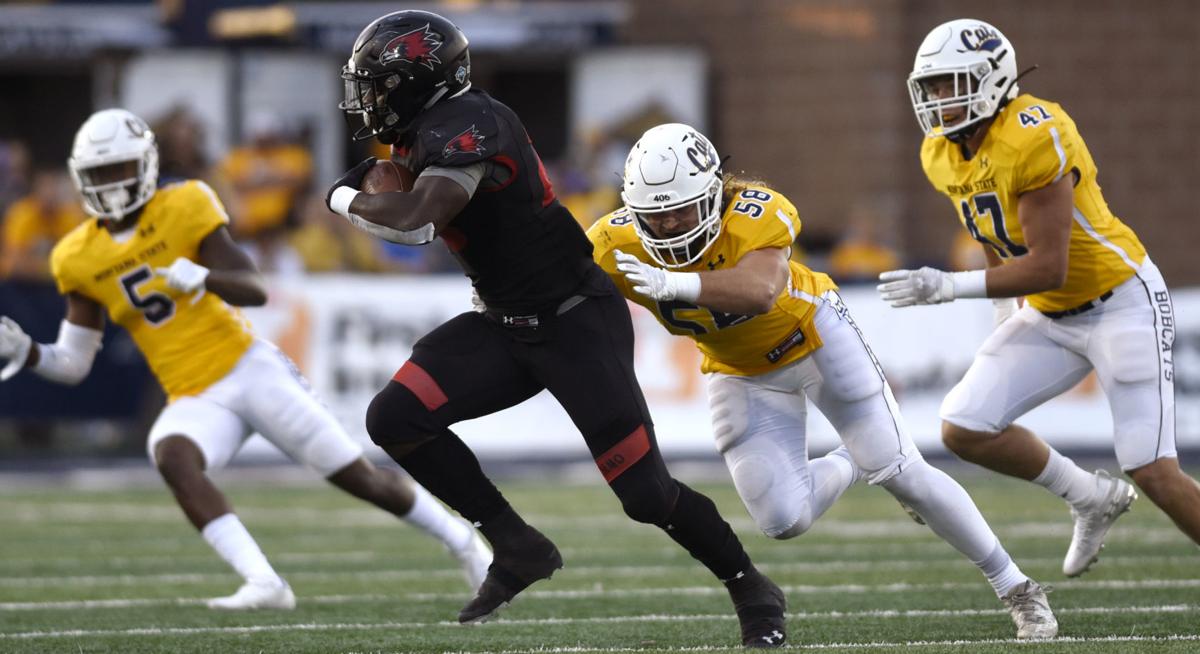 Callahan O’Reilly needed to do extra.

As a freshman last season, the Bozeman native played in 10 games but only recorded five tackles. Heading into 2019, he had a chance to become Montana State’s starting middle linebacker.

So he woke up for 6 a.m. workouts during the offseason. He watched film so he could know what he needed to improve and could understand where everyone else on MSU’s defense fit on specific schemes.

And he went to Bobcat Stadium for sprints. So he was conditioned. So he was ready to earn a larger role in the Bobcats defense.

“Just always trying to do extra. The strength staff does a great job of getting you prepared on their own, but if you want to take the next step, you have to do the extra,” O’Reilly said. “Extra stretching. Extra film study. Extra conditioning. All that stuff.”

When the season started, O’Reilly was a backup. Still, he didn’t let it bother him. His playing time was out of his control. But his play wasn’t.

So O’Reilly remained focused, and last week, he earned his first start of the season. The sophomore recorded a game-high 16 tackles including a tackle for loss and a sack at Cal Poly.

“I think we’ve been able to get the job done,” O’Reilly said. “Obviously, there’s room for improvement and things we need to get better. I think we’ll continue to do that just through our preparation.”

Last season was O’Reilly’s first as a full-time linebacker. He was an all-state quarterback at Bozeman in 2016 as he threw for 3,178 yards, rushed for 379 and recorded 39 total touchdowns.

His experience last season was crucial. As he watched film and practiced, he felt himself improve. Everything started to feel slower as he began to anticipate what offenses were going to do. The more he learned, the more comfortable he became.

MSU wide receiver Lance McCutcheon, who was one of O’Reilly’s receivers at Bozeman, could tell the work was paying off.

“He’s made a great stride and really improved for us on defense,” McCutcheon said. “I’m just happy to see him out there. Like I said, we’ve been playing together for so long and just to see him out there filling holes and stopping the run and making big hits and just making plays, doing what Callahan does … I couldn’t be happier for him.”

In the offseason, with the graduation of his cousin Grant Collins, O’Reilly had a shot to earn a starting spot.

But as he pushed himself in the offseason, so did Nolan Askelson, another MSU linebacker who was shooting for a starting spot. If one was working, so was the other.

Askelson was just a little more productive and was named the starter out of fall camp. But O’Reilly wasn’t disappointed, he said. He was happy for his teammate. He knew they would continue to push each other. And he didn’t want to let his standing in the depth chart affect how he played.

“For me, it’s just doing what you can control,” O’Reilly said. “You can’t choose what the coaches are deciding, but you can control how you play every day and just going out there and playing the best I can knowing that, if I just continue to play good, things are going to work out.

“Just go out there, play your best, and in the end, don’t worry about what other people are thinking about you.”

In the first game of the season at Texas Tech, O’Reilly was leveled on a blindside hit early in the game. He was slow to get up. He couldn’t breathe for about a minute.

He began to wonder if this was just how the season was going to go.

He carved out his role as the season went on and earned roughly the same amount of snaps as Askelson. Then against Cal Poly, MSU head coach Jeff Choate felt O’Reilly, at 6-foot-2, 228 pounds, was better suited to take on the Mustangs’ triple option.

All a product of his offseason work.

“Callahan O’Reilly,” Choate said, “had a tremendous week especially in overtime when we needed some critical plays. But Callahan O’Reilly, sideline to sideline, probably the best game he’s played as a Bobcat. Tremendous job there.”

O’Reilly isn’t satisfied. He knows the Bobcats have another tough offense to face this weekend in Sac State. He also knows his team can’t afford a loss in a tight conference race.

So even after he laid so many hits against Cal Poly, he’s prepared for more.

“I was pretty sore,” O’Reilly said with a smile earlier this week. “But I’ll be ready by Saturday.”