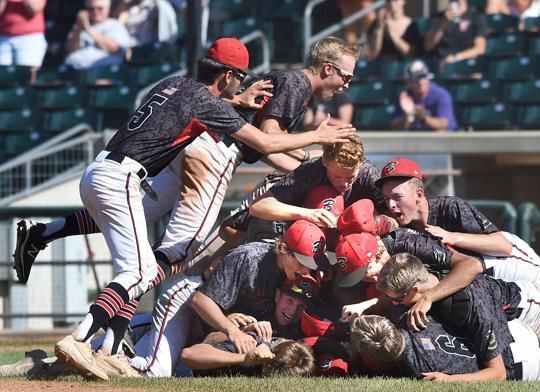 Bozeman players celebrate after the Bucks defeated the Helena Senators 5-0 to win the Class AA state championship Sunday at Dehler Park in Billings. 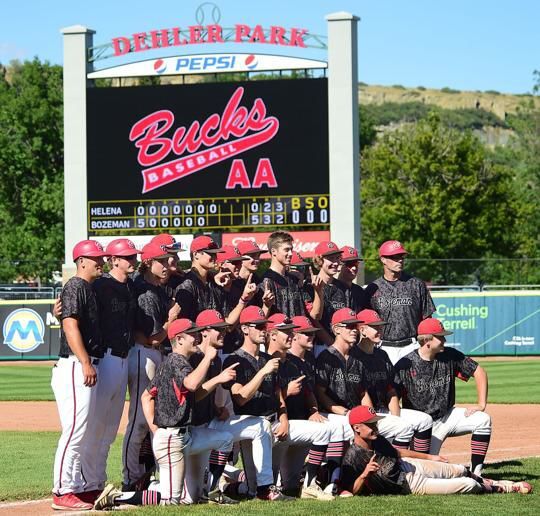 Bozeman players gather for a team photo after winning the Class AA state championship against Helena at Dehler Park in Billings on Sunday. 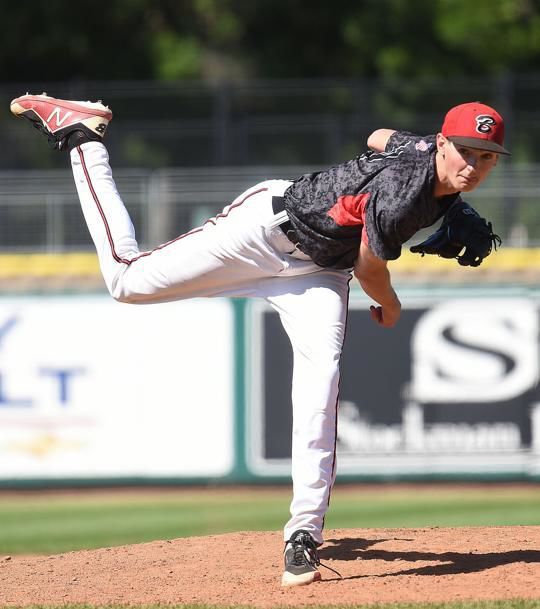 Hunter Williams pitches in the Class AA state championship against Helena at Dehler Park in Billings on Sunday.

All eyes at Dehler Park were on him all afternoon. One final time, his calm demeanor was on display. But this time, his path to the dugout only lasted a few steps.

Instead of between-inning high-fives, Williams dropped the glove from his left hand and let teammates mob him at the bottom of the pile.

“I was just getting prepared for the onslaught of boys that were about to jump on top of me,” Williams said. “It was fun. It was real fun.”

Sunday’s title win was a 5-0 victory against the Helena Senators at Dehler Park in Billings. No. 1-seeded Bozeman (48-13) scored all five runs in the first inning and spent the rest of the game in cruise control because Williams was in the driver’s seat. His two-hit complete game shutout stamped the dominant end to the dominant season.

Even in his celebration, Williams never showed suspense.

“It was the funnest and most amazing game I’ve played,” Williams said. “Knowing I had all those guys behind me allowed me to do my absolute best.”

Williams expressed gratitude for just having the chance to play this summer after the season was delayed by the coronavirus pandemic.

High school sports in the spring were canceled. College and professional teams went on hold. But baseball in Montana soldiered on, with the Bucks beginning their season the Friday of Memorial Day weekend and never looking back.

“I think it taught us a lot about hanging on to hope,” manager Garrett Schultz said.

Center fielder Kelher Murfitt described early-season practices as an escape. During the state’s stay-at-home order in April, he and his teammates couldn’t hang out on Main Street or go out to eat or socialize together. So when practices began and they reconvened, players’ mental states improved.

A year ago, Bozeman rolled through the state tournament. The Bucks returned most of the core from that team. Before the season started, Murfitt was optimistic and expectations were high.

Schultz commended the group for loving baseball. He and his coaching staff put a premium on winning. Players put in time on their own to set the standard for the team.

Williams finished the regular season with a 2.11 ERA and 9-0 record. Sage McMinn ripped 13 homers, batted .500 and powered the offense. Alton Gyselman drove in 66 RBIs, scored 56 runs and provided a steadying presence at catcher. Murfitt scored 80 runs and had an on-base percentage of .562, playing a key role batting leadoff. Ben Hubley scored 57 runs and led by example at second base.

Each served as a pivotal piece to the puzzle.

Bozeman won its first state title in 2007. That was the program’s only championship prior to last season. Now the Bucks have two more.

“This group has laid the foundation for winning and what success looks like for our program,” Schultz said.

After Williams threw a 1-2-3 first inning, Murfitt led off in the bottom half. Catcher interference put him on first and McMinn being hit by a pitch bumped him to second. Singles by Preston Fliehman and Logan Pailthorpe, combined with a pair of Senators errors, led to five runs in the first inning.

The early performance mirrored how Murfitt described the unprecedented start to the season.

“We didn’t know what was going to happen. Everything was up in the air,” Murfitt said. “Then we just got rolling.”

Once the Bucks built their comfortable lead, Williams could relax. He didn’t need to be as picky on the mound. Instead he could attack hitters and trust his defense to make plays.

Prior to the contest, Williams tried not thinking about what was at stake. When he wanted to remain calm, he practiced breathing exercises. He visualized how the game would unfold.

Once the championship started, Williams mixed in his curveball to unbalance batters. That increased the effectiveness of his fastball, and he kept dealing. He escaped a few potential jams, kept his pitch count low and let his defense go to work.

“Hunter’s done that for a long time for us. He did the same thing for us last year. That’s the definition of consistency. Never has a bad outing. Consistently in the strike zone,” Schultz said. “It’s been incredible to have him as long as we have. Our guys just love to play behind him.”

Bozeman went 21-3 in regular season conference games. The Bucks strung out 25 wins in 27 games during one stretch. They led the conference with 8.6 runs per game and let the scorching hot offense put pitchers at ease.

Schultz commended Billings for hosting the tournament without any problems. He credited coaches and commissioners around the state for creating an environment for the season to last all the way until the championship. And he credited his players for “playing their hearts out.”

More than just the games, the wins and losses and the tumultuous nature of a season mid-pandemic, Williams said he’ll remember the bus rides, the jokes and the time spent bonding.

Murfitt will remember the group that stuck together for years and years and how it all came to a conclusion.

“It’s one thing to do it once,” Murfitt said. “Doing it back to back, just perfect ending. It was just, holy cow. Dream come true.”