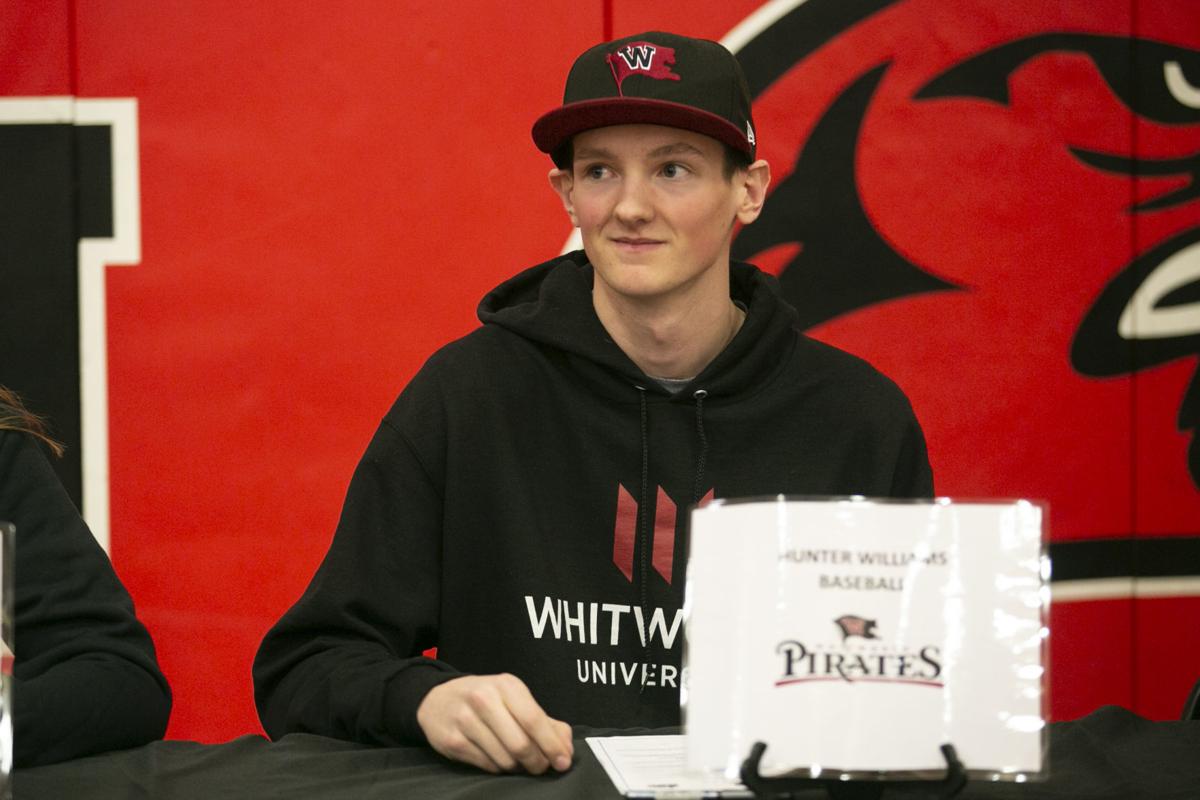 Hunter Williams signs to Whitworth on Feb. 5 at Bozeman High. 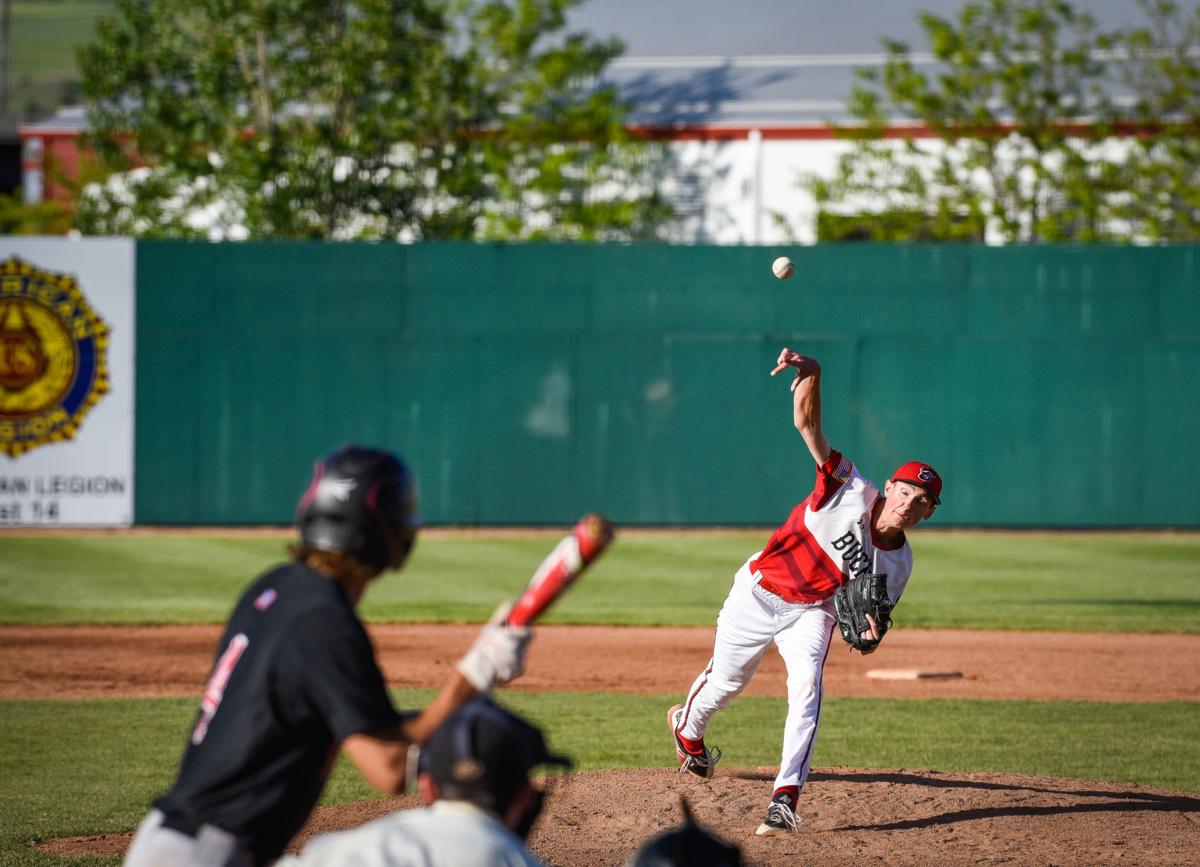 Hunter Williams throws a pitch against the Gillette Roughriders on June 10 at Heroes Park.

Hunter Williams signs to Whitworth on Feb. 5 at Bozeman High.

Hunter Williams throws a pitch against the Gillette Roughriders on June 10 at Heroes Park.

Away from the high-pressure situations of games, Sage McMinn knows his teammate, Hunter Williams, to be reserved. He’s kind, McMinn said, but quiet.

When Williams takes the mound, though, he’s different.

“When he steps out there,” McMinn said, “he just shuts (other teams) down.”

Williams isn’t shy about his goals for the season. He has a desire to be known as the best American Legion pitcher in Montana.

He’s worked tirelessly in hopes of earning that reputation. He was an all-state pitcher last year and the ace for the Bozeman Bucks. This season, his drive remains.

In 47 2/3 innings this season, he’s tallied 71 strikeouts and allowed just 40 hits and 24 walks on his way to a 2.2 ERA. In his latest outing against the Missoula Mavericks on Wednesday, he allowed just one earned run on three hits in seven innings while striking out seven batters and walking six in a 3-1 victory. The Bucks (31-10) have won 13 of their last 15 contests.

While providing his teammates someone they can depend on at the mound, Williams’ ambition to earn that top standing in the state motivates him.

“That’s definitely what I’ve been really working on,” Williams said, “is going out there, trying to beat every team that I can face and show I can be the No. 1 for a reason.”

Williams joked he was drawn to baseball as a child because he grew tired of tennis. But as he started playing, he needed to know how far the sport could take him.

He made an all-star team by the time he was 11 years old. But that year, he hardly played, instead sitting on the bench and watching others compete.

He dreaded that feeling. That offseason, he began working tirelessly with a pitching coach. The following season, he was a starter.

That’s when he fell in love with the sport, when he knew he wanted to keep playing and when he gained the confidence needed to excel.

“When you’re on the mound,” Williams said, “you’ve got to have the (confidence) that you’re going to go beat that hitter every single pitch. It really helps you get focused and want to throw hard and go in there and beat any hitter you face.”

Respect for Williams quickly grew among his Bucks teammates and other teams in the state. He was his team’s leading starter and was on the mound last season when Bozeman secured its first Class AA championship in 12 years.

Bucks manager Garrett Schultz wants Williams to face tougher teams this season. He hopes the young pitcher who signed to Whitworth is tested against top-end opposition.

The confidence Williams shows as a pitcher, Schultz noted, affects the whole team.

“You can see it even in our defensive numbers,” Schutlz said. “Our guys are really checked in and focused when they know they have somebody who is pounding the strike zone on the mound. When Hunter goes out and does that and challenges hitters, our guys play at a quick pace. We’re engaged, the game moves quickly, and you know it’s going to be a competitive game on our end.

“It’s really fun when he’s on the mound. You just know he’s going to give us a shot every time.”

Williams enjoys being a steady presence for his peers. He knows he can help them by attacking the strike zone, leading to ground hits or pop ups that create easy outs.

“We always know we’re going to win with him on,” McMinn said. “Just what he brings to the mound sets up the whole team. Every time he pitches, we come out hitting really well.”

Williams’ preparation wasn’t hampered this offseason by the coronavirus outbreak. He still learned from a pitching coach as he does every offseason, which begins with about a month of rest. He completed strength workouts three times per week and throwing sessions once a week.

His training continues all the way until the spring. If the Bucks hadn’t played, he would’ve simply stuck to his routine.

Williams has been reliable for the past four years, Schultz said. Therefore, finding ways for him to improve is a challenge.

“We haven’t had to make any sort of major changes with Hunter,” Schultz said. “He’s just kind of been a steady force for us.”

Schultz has asked Williams what drives him. He wants to be an excellent collegiate pitcher, so he strives to identify ways he can build his game to prepare himself.

Schultz said Williams already has a standout fastball and curveball he can effectively locate. But Williams recently expanded his repertoire and began throwing his changeup more often this year.

Schultz hopes Williams can continue to improve in pressure situations. He wants Williams to slow the game down in his mind, process what base runners are trying to accomplish and not let other teams dictate his mindset. That, Schultz said, could be the next step in his development.

Williams agreed. He wants to control the performance of every opponent in every inning with every appearance. That, he figures, would be enough reason for him to be known as the premier pitcher in the state.

“I’ve really worked on that,” Williams said. “I think it’s really just asserting myself as being No. 1 out there and just trying to hold onto that title and show I deserve to be out there, I deserve everything I’ve gotten out there and I’ve just got to keep doing what I’m doing.”