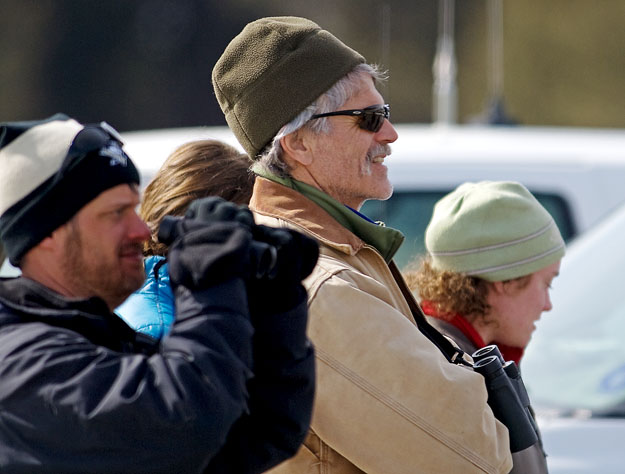 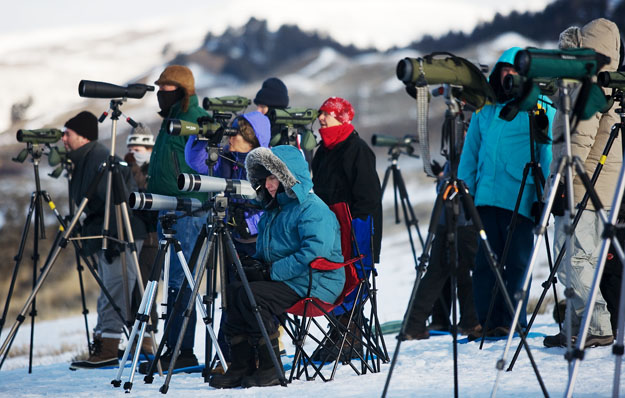 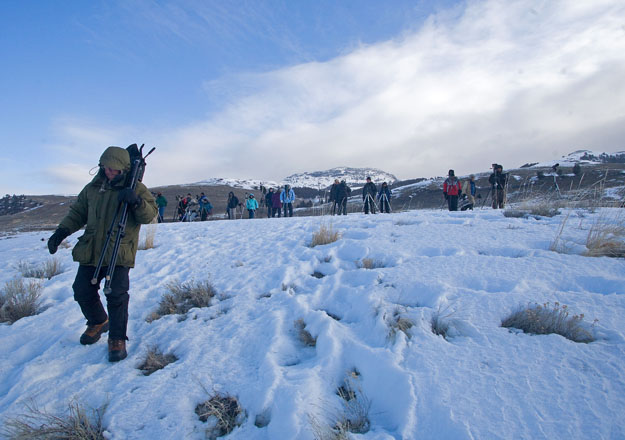 A wolf watcher calls it a morning after witnessing the Silver Pack kill a bull elk. 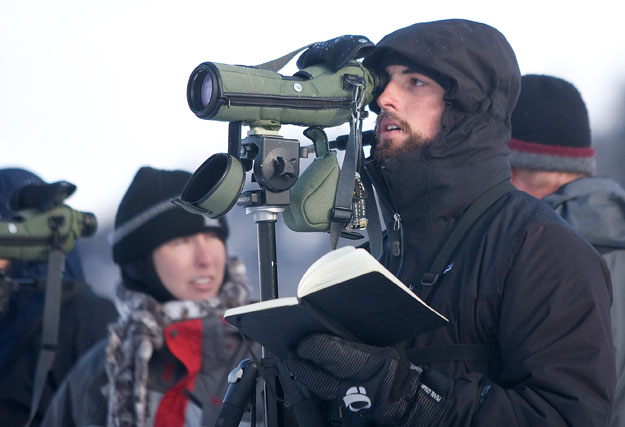 Yellowstone Wolf Project volunteer Nate Bowersock takes notes while observing the Silver Pack in the Lamar Valley. Bowersock is participating in a thirty day study with other volunteers to intensely observe wolves in Yellowstone National Park. 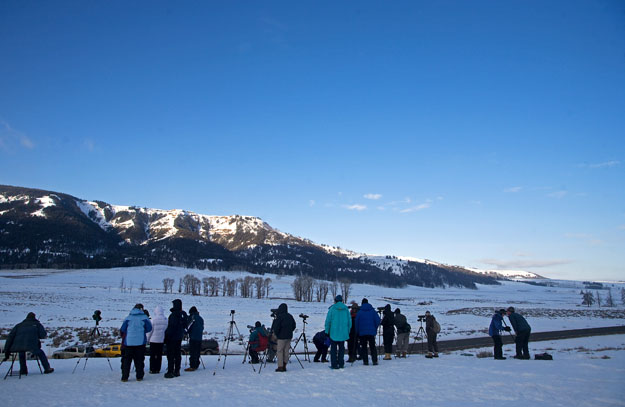 Wolf watchers gather at first light witnessing the Silver Pack make a kill on a bull elk in the Lamar Valley in Yellowstone National Park. 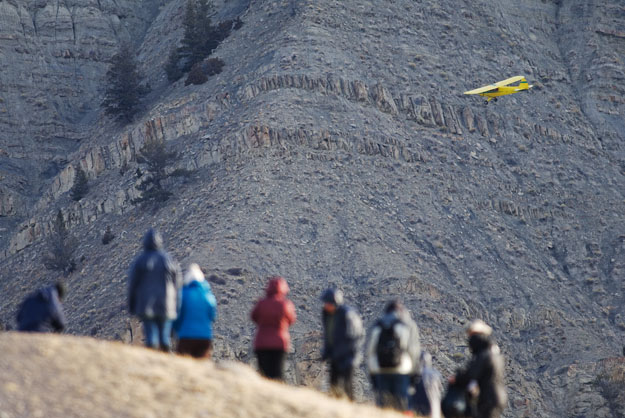 An airplane is used to help spot and locate wolves next to the Gardner River in Yellowstone National Park.
This is the masthead logo for the wolf series.
By Chris Kerr
1 of 6

A wolf watcher calls it a morning after witnessing the Silver Pack kill a bull elk.

Yellowstone Wolf Project volunteer Nate Bowersock takes notes while observing the Silver Pack in the Lamar Valley. Bowersock is participating in a thirty day study with other volunteers to intensely observe wolves in Yellowstone National Park.

Wolf watchers gather at first light witnessing the Silver Pack make a kill on a bull elk in the Lamar Valley in Yellowstone National Park.

An airplane is used to help spot and locate wolves next to the Gardner River in Yellowstone National Park.

YELLOWSTONE NATIONAL PARK -- Biologist Doug Smith made his way through the park on a sunny March day, checking on teams of wind-burnt scientists as they tracked and observed every pack of gray wolves in the park.

Smith has played an integral role in the park's wolf program ever since wolves were reintroduced 15 years ago. Yet for all that time spent working on the reintroduction, a day in Smith's life during March can be as unpredictable as wildlife itself.

Throughout the month, throngs of volunteer researchers -- mostly biology students and educators -- spread across Yellowstone in what has become one of the most comprehensive wolf studies in the world.

Acting on information from biologist Dan Stahler in the airplane, the team of volunteer trackers headed into the Mammoth's upper terraces to see if it could get closer to the pack.

The Canyon pack is exceptionally wily because of its tendency to travel back and forth through the Lamar Valley, according to Josh Irving, one of the volunteers. But team members were hopeful that a dead elk under the ice of a nearby creek would bring the pack in for observation.

Teams can go days without seeing their assigned pack, but spend each one on the lookout, nevertheless. But when researchers do see wolves, they take note of every detail: time of day, number of wolves, number of pups, type of prey. They will even trudge out to a carcass once the wolves have left to measure the bones in hopes of learning something about the size of animals wolves select to kill.

Over the years, with researchers tracking and watching the wolves from sunup to sundown, Smith and others have slowly begun to comprehend the predators' complex role in the ecosystem.

Getting the science to the people

When the team left for the terraces, Smith, 49, stayed back to talk to a group of high school students from Idaho's Northwest Academy participating in a Yellowstone Association wildlife program. A good portion of his job is education, and teaching people about a subject as complex as the ecological relationship between wolves and prey can be a daunting task.

A problem, he said, in trying to convey the complexity of the program is that the wolves are not, as they might seem, the center of the ecosystem.

"Wolves are certainly a piece of the (ecological) pie, but we're constantly looking for what that percentage might be," he explained.

Smith and the volunteers are most interested in the relationship between wolves and elk, but the two species are wrapped up in just about everything else in the park.

In the years that wolves were missing from the Greater Yellowstone area, the ecosystem had become destabilized, Smith said. Their return has helped restore a certain balance of nature, the details of which humans may never fully understand. The wolves "have a finger in the dam, along with so many other factors, but how big is that hole they're filling?"

When the elk population boomed in the absence of wolves for most of the 20th century, it had a profound effect on Yellowstone's ecology -- from vegetation to scavengers -- that is still seen today.

Smith and other biologists call such an interconnection a "trophic cascade" -- the wolves obviously affect elk, but that then affects numerous plants and scavengers, which also affect other aspects of the ecosystem, and so on.

For biologists, the full extent of the wolves' effect in Yellowstone is infinitely hard to measure, but pieces of the puzzle are being witnessed already, 15 years into the restoration.

The rejuvenation of willows and aspens is potentially one of the effects. But, in a testament to the elusiveness of ecology, that regrowth may have more to do with climate factors than with the wolves' effect on the ecosystem. But Smith doesn't think so.

Through the end of a scope

Smith can be deadly serious about his work, but tries to foster friendship and camaraderie with the volunteer ecologists who put in 12-hour days.

Individual teams know their packs like family, even from the other side of the spotting scope.

"I know the packs OK because I get to see them all," Smith said, "but (the volunteers) get to be experts, and they definitely know their pack better than I do."

Driving south on Grand Loop Road, he met up with the group of biologists tracking the Blacktail pack. The wolves were putting on a show.

Through the spotting scopes, the researchers watched a gray wolf standing over the ribs of a spike bull elk, blood on his muzzle. Other members of the pack lounged nearby. Ravens, eagles and a coyote waited for their turn at the carcass.

Smith had arrived after the wolves had "rallied," which, as team member Hilary Zaranek put it, is a "group ceremony when they howl and wag their tails looking like it's the happiest moment of their lives seeing each other."

Another member of the team, Dave Unger, was turning 40 that day and said witnessing the rally was the greatest birthday gift he could have had.

"I tell you, that Big Brown is one of the most beautiful wolves I've ever seen," he said, his eye glued to the end of a scope focused on the alpha male of the pack.

Smith told the team a lively story about Blacktail No. 692, referring to the wolf's collar number, and how she has it out for him after a particularly harrowing encounter.

One day, Smith was attempting to dart and sedate No. 692 so he could do a periodic check. He was hanging from a helicopter, trying to get a shot at her, when she became angry and tried to jump up at him, gnashing her teeth.

"If she knew I were here right now, I'm pretty sure she'd come sprinting over," he said with a laugh, as the pack howled around the mangled elk.

Smith has accumulated a lot of wolf stories during his 30-plus year career studying the canines. After earning a Ph.D. in biology from the University of Nevada-Reno, he started his career at Isle Royale National Park in Michigan's Lake Superior, working on another of the world's most researched wolf populations. His first post there was as a research technician, doing the same kind of work as the volunteers he now supervises.

Then in 1994, Smith took a job with the National Park Service specifically to work on the Yellowstone reintroduction project.

Between radio-collaring, tracking from the airplane and shooting darts from helicopters, he's not afraid to get his hands dirty. But a lot of the work is done in the office, also, managing the program's efforts and contemplating the big questions.

"How do you learn? You keep things simple," Smith said.

"We like to keep asking the same questions, and then see how the answers change over time," he said. "I wish I knew how much all the other factors contributed to the system, but all we can do is ask questions, make observations and learn as much as possible."

Michael Gibney can be reached at mgibney@dailychronicle.com or 582-2638.

Fifteen years after the return of wolves to Yellowstone National Park, questions remain: What have we gained, what have we lost, and perhaps most importantly, what have we learned?

Return of the Wolf

Day in the life of Doug Smith, Yellowstone wolf biologist