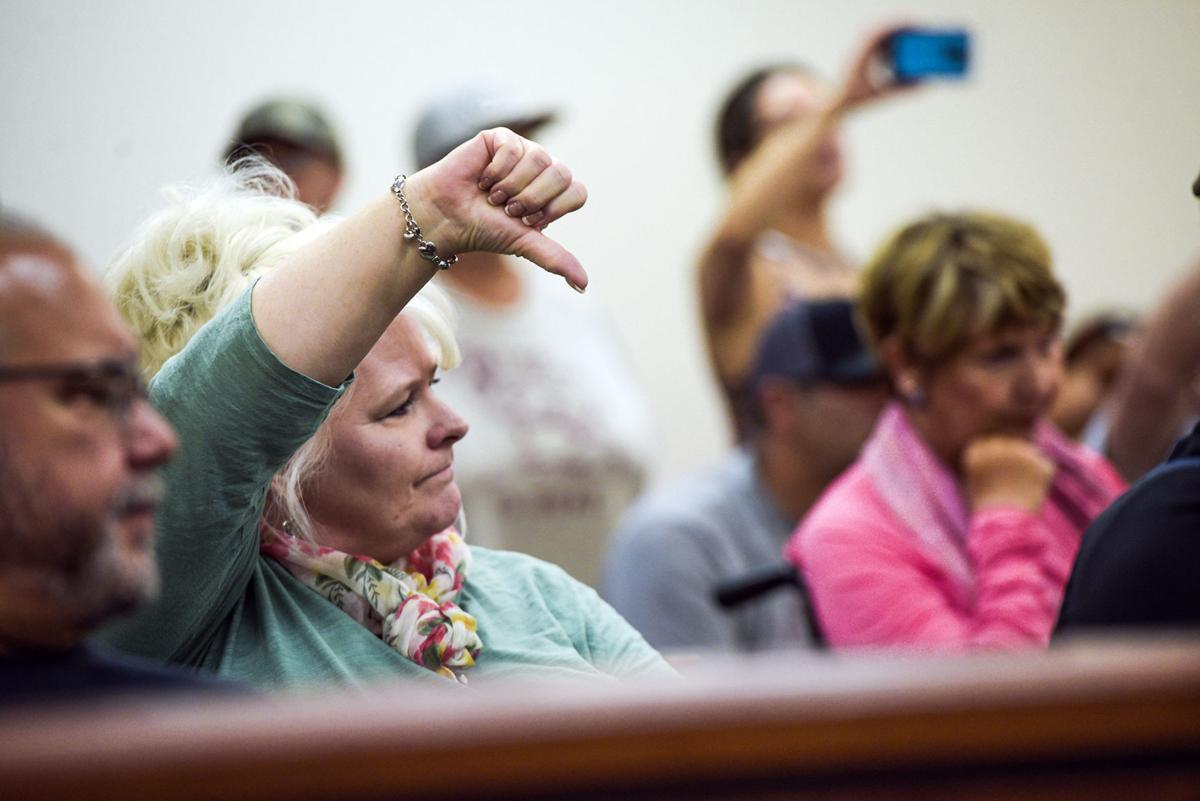 Members of the public hold their hands up with their thumbs down to voice their disapproval during a Southwest District Health board meeting on Thursday, July 23, 2020 at the Canyon County Courthouse in Caldwell. 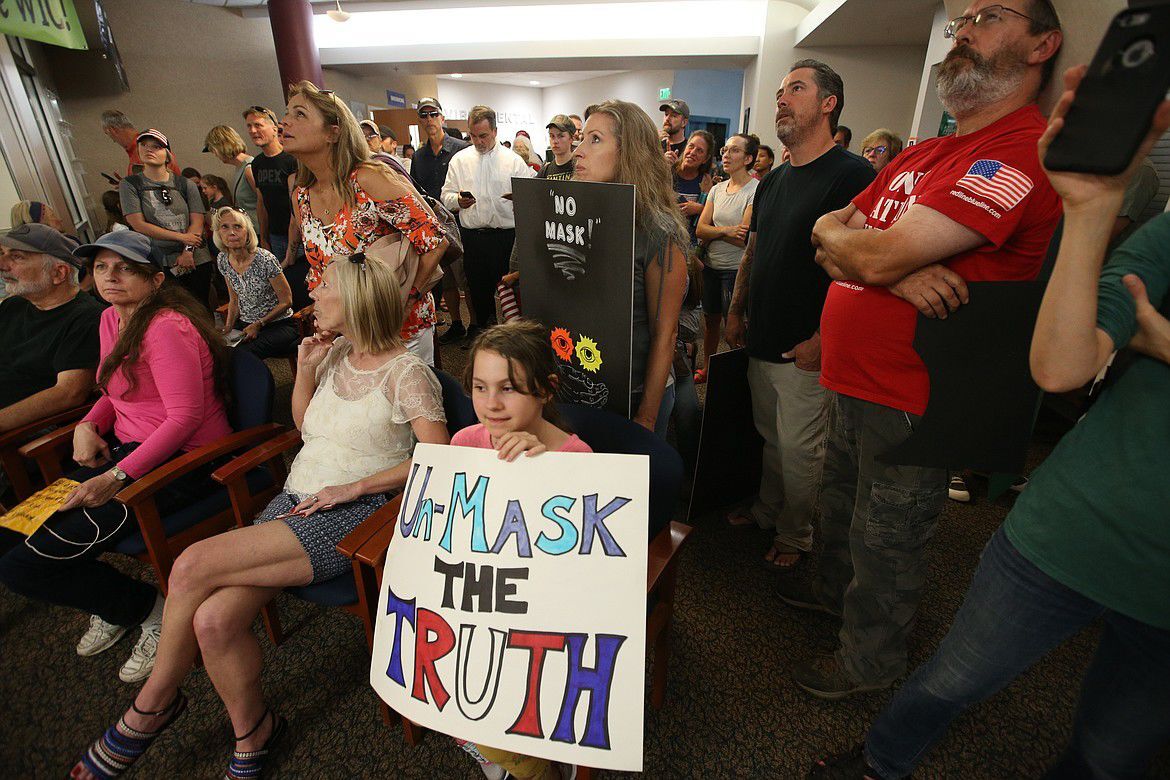 Anti-mask protesters at a Panhandle Health District board meeting on July 17, 2020 in Hayden, Idaho, are shown in this Coeur d’Alene Press photo.

Members of the public hold their hands up with their thumbs down to voice their disapproval during a Southwest District Health board meeting on Thursday, July 23, 2020 at the Canyon County Courthouse in Caldwell.

Anti-mask protesters at a Panhandle Health District board meeting on July 17, 2020 in Hayden, Idaho, are shown in this Coeur d’Alene Press photo.

Each region in Idaho tailors its approach

“We’ve had a couple of mask-burning parties outside our building,” Lora Whalen, director of the Panhandle Health District, told the state Board of Health and Welfare. “Our building has been tagged a few times, we’ve had to threats to staff, and lawsuits, which are time-consuming. … Monetarily, we’re on our own for those lawsuits.”

Nikole Zogg, Southwest District Health director, said, “We’ve had some challenges with the politicizing of COVID-19 and protesters as well at our facility.”

Geri Rackow, director of Eastern Idaho Public Health, said, “The way the pandemic response has been politicized, that’s no different in our region. We certainly have people on both ends of the spectrum.”

They and Melody Boyer, director of South Central Public Health District in Twin Falls, who said protesters have been showing up at her board meetings in recent months, said each of their districts faces unique challenges in dealing with the COVID-19 pandemic, and each has developed its own metrics, plans and tactics to address it. While some districts have imposed mask mandates and limits on gatherings, others have offered only recommendations.

“In our six-county region right now, five of our counties are in the red zone,” Zogg told the board, “meaning they’ve had substantial spread.” The district, which includes Canyon County along with Adams, Gem, Owyhee, Payette and Washington counties, hasn’t imposed any mandates to stop the spread.

“The District 3 board has not supported any mandates, and I don’t anticipate that they likely will, not in the foreseeable future,” Zogg said. “All of our mitigation measures have focused on public education and information, investigations and contact tracing. … We provide a lot of consultation to our community.”

Pressed by state board members about mask mandates to slow the spread of COVID-19, Zogg said, “I still think that a majority of our board members — six of them are county commissioners, elected by constituents — and their constituents, I think, largely feel pretty strongly about having face coverings being recommended and not mandated.”

“They don’t have the support on their city councils for mask mandates,” she said. But, she said, “We’re certainly starting to see more adherence to our recommendations.”

“Our district trends right now are primarily linking to social gatherings and workplace exposures,” she said. “We’ve had clusters of infections occurring in long-term care facilities.”

State board member Wendy Jaquet asked Zogg about recent calls to change Idaho’s health district dividing lines. “Has your board had any conversations (about) … maybe having Canyon and Ada combined so that you would have a more urban district rather than an urban-rural district?” she asked.

“No, to my knowledge there have been no conversations of that nature among the board,” Zogg replied. “I know our community culturally would be characterized differently than, say, Ada County.”

Ada County, which falls under Central District Health, currently has a countywide mask mandate, as does Valley County, which also is in that district.

“I believe the intent of the districting, way back when … was to allow for urban centers to help support more rural counties that may not have the resources to support an overall health department,” Zogg said.

Boyer said in her region, the pandemic started in Blaine County, but now has become concentrated in her district’s other counties, including Jerome, Lincoln, Minidoka and Cassia.

Those counties have seen “huge, disproportionately higher cases of COVID” among their Hispanic populations, at half or more of the cases, Boyer said. The district has responded by developing Spanish-language materials about the virus including a page on its website, social media campaigns, and widely shared, locally-produced videos that have received more than 9,000 views on the district’s website and also been shared with employers, chambers of commerce and more.

She said 70% of her district’s cases have a known link for the exposure. “They are mostly household, relatives, friends or at the workplace,” she said.

The district also is facing challenges with jail outbreaks, Boyer said, with more than 190 COVID-19 cases among two county jails in Twin Falls and Jerome counties.

Meanwhile, Blaine County has mandatory mask orders in effect by ordinance both countywide and in the cities of Sun Valley, Ketchum, Bellevue and Hailey, while the rest of the district has only a resolution encouraging masking.

“Blaine County right now has the lowest incidence rate of less than one case per 10,000 people,” Boyer said, “and the (test) positivity rate is less than 4%.”

In eastern Idaho, Rackow said, “Our board has been very proactive in some of the measures they have taken. We have orders of restriction for six of the eight counties.”

There also have been issues with compliance with contact tracing, she said.

Rackow said she’s been closely coordinating with Southeastern Idaho Public Health, as the two neighboring districts have much in common. Zogg said she’s been doing the same with Central District Health, including twice-weekly calls between the two district’s directors and extensive regular communication outside that as well.

Whalen said her district imposed a masking order in Kootenai County on July 23, but it’s not “not being enforced.” Big-box stores have imposed their own requirements, she said, and that’s helped, “but certainly downtown on Sherman Avenue on a sunny weekend, you don’t see masks.”

Darrell Kerby of Bonners Ferry, state Health and Welfare board chair, said North Idaho has been “inundated” with visitors from Washington “primarily because of their state having been so closed and our state relatively open, comparatively.”

Elke Shaw-Tulloch, administrator of Idaho’s Division of Public Health, praised Idaho’s public health district directors and staff. “We have just wickedly amazing, talented people who work for us and they have been working night and day, literally,” she said.