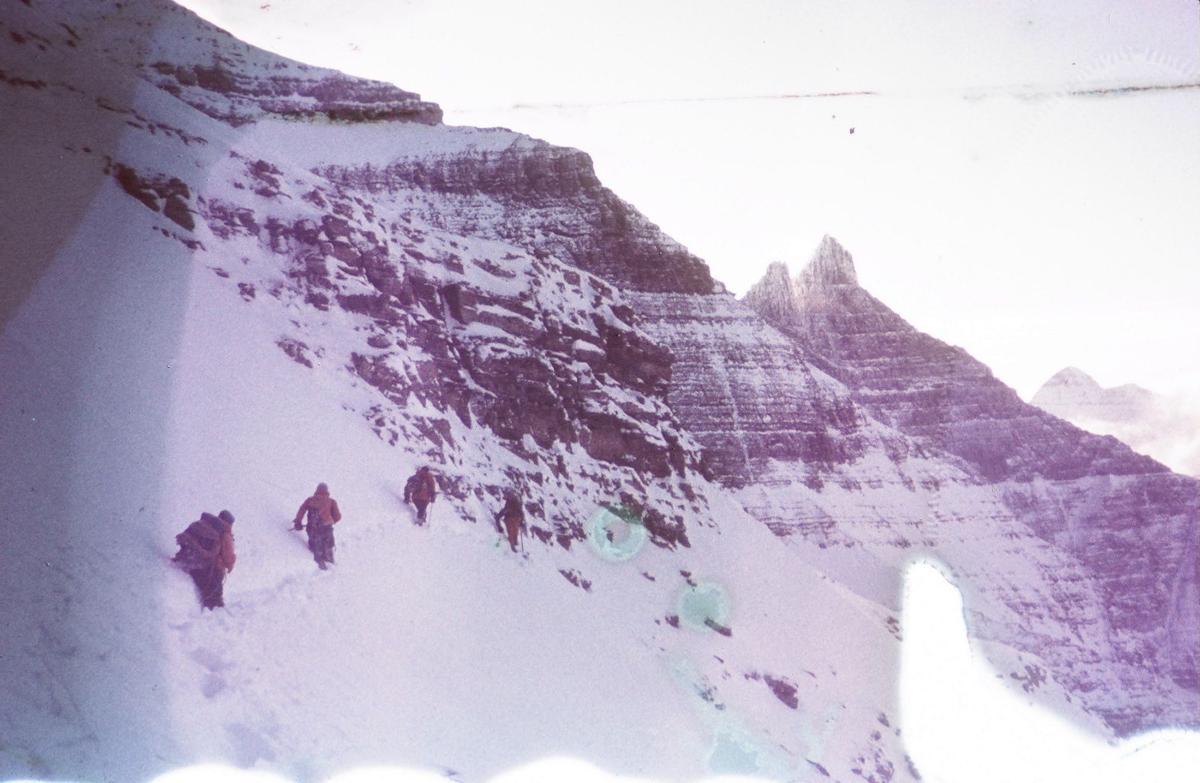 Five young Montana mountaineers traverse onto the west face of Mount Cleveland in Glacier National Park, December 1969, never to return. The damaged film in the camera was recovered from the snow seven months after the tragedy. 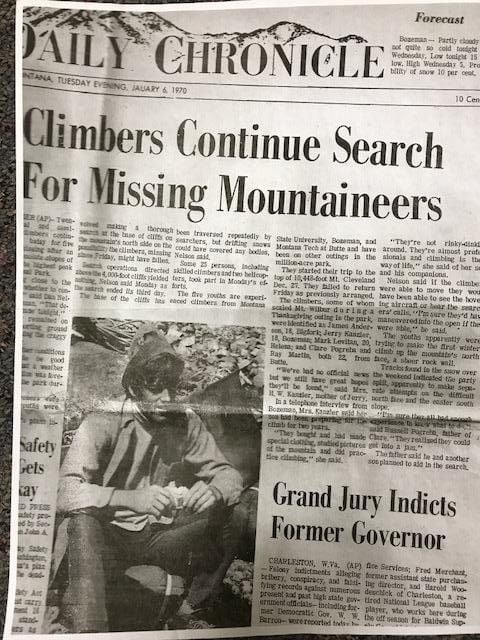 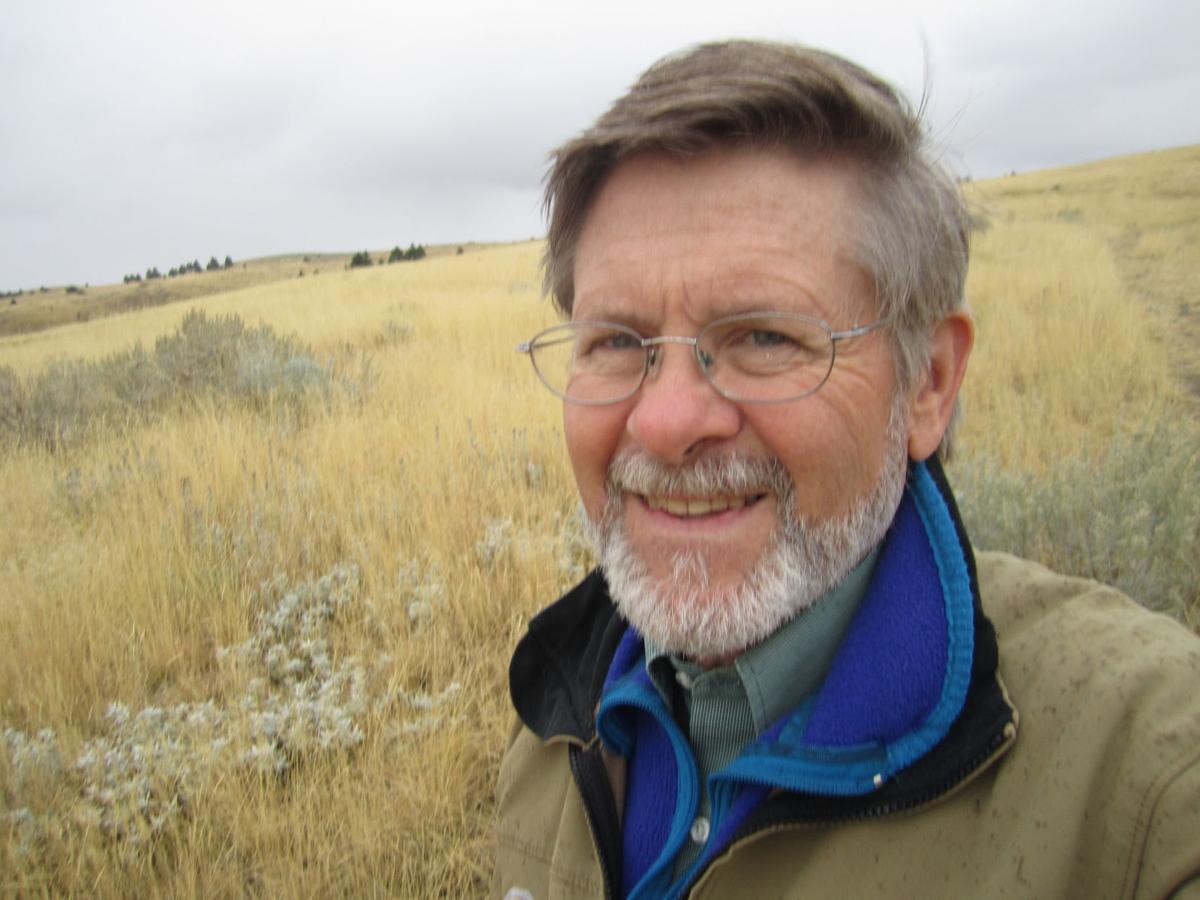 Five young Montana mountaineers traverse onto the west face of Mount Cleveland in Glacier National Park, December 1969, never to return. The damaged film in the camera was recovered from the snow seven months after the tragedy.

Terry Kennedy was a 15-year-old high school sophomore when the news broke that five young mountain climbers had disappeared while attempting to be the first to climb the north face of Mount Cleveland in Glacier National Park.

For a week in January 1970, the search for the five climbers made front-page headlines across Montana, from Bozeman — where three of the missing were Montana State University students — to Missoula, Billings, Kalispell and Great Falls.

They were just 18 to 22 years old, and one college freshman, Jerry Kanzler, was a neighbor from Kennedy’s hometown, Columbia Falls. A search team came up from Bozeman to Glacier. Finally, hope faded, and the park called off the search.

It wasn’t until the following July that the climbers’ bodies were found, some buried 25 feet deep in snow and ice by the avalanche that had swept them to their deaths.

From such a tragedy, some people would undoubtedly draw the lessons that life is fragile, mountains can kill you, and it’s safer to stay home.

Kennedy had the opposite response. He felt determined to teach himself how to climb. He wanted to carry on the spirit of the lost climbers.

“To me it was almost a call to action,” he recalled. “I was 15 years old, kind of crazy. By golly, I was going to climb the north face of Mount Cleveland.”

Kennedy has recounted the 47-year-old tragedy, and the lifelong passion for mountain climbing it inspired, in his self-published book, “In Search of the Mount Cleveland Five.”

“Who would fill the void left by the Mount Cleveland Five and shoulder the load — the passion that is mountain climbing?” he wrote. “Who would carry the torch?”

Today at 63, Kennedy lives in Bozeman and works as a physical therapist. A second reason he wrote the book was to capture a slice of Montana mountain lore that would otherwise be lost.

A lot of the climbing in 1970s Montana was never reported in alpine climbing journals, he said. “We looked at ourselves as living in a kind of utopia. We kept climbing under wraps a little so it wouldn’t become popular,” as was happening in Yosemite, Colorado and Alaska.

Growing up in a working-class town dominated by an aluminum plant and sawmills, Kennedy had known Jerry Kanzler, his older brother Jim and dad, Hal Kanzler, through Boy Scouts. He idolized them.

The dad was a World War II veteran, who fought as a Marine captain in Okinawa, and was very driven, Kennedy recalled. He’d wanted to live life to the fullest for all the other World War II soldiers who never made it home. He challenged himself and his sons to climbing mountains, starting at ages 12 and 15.

“I thought climbers were like astronauts in the hierarchy of adventurers,” Kennedy said. Once he and his brother had climbed up the easy side of Glacier’s Mount Siyeh, creeped to the edge and looked over into the deep vertical void below.

“It was like looking into another galaxy, another time,” Kennedy said. “I told him, ‘I’m gonna climb that face someday.’”

By the time he was 21, Kennedy, an MSU student himself, had been climbing for several years. He attempted a big wall climb in the Beartooths. It nearly killed him.

He remembers falling — cartwheeling down 25 feet, hitting a narrow ledge, bouncing off and falling another 30 feet, until the rope held by his partner, Brian Leo, stopped him. Amazingly, Leo was strong enough to hang on and keep them both from being pulled to their deaths.

Kennedy said he was just thinking he wasn’t dead when big rocks started tumbling toward him. He dodged one but got hit by another. It cut a gash on the back of his head that left him bloody and exposed a bit of skull, yet he was still alive. Full of adrenalin, he clambered up the rope, over his partner and onto the ledge.

A year later, Kennedy was 22, the same age as the oldest of the Mount Cleveland Five. He had always wanted to be among the first to climb the north face and to do it by the time he was 22, to prove that the lost climbers hadn’t been too young to make the attempt.

Kennedy and Steve Jackson, a Bozeman High graduate, planned to go. Three days before they set off, Jim Kanzler, Jerry’s older brother, joined them. It was a beautiful fall day in September 1976.

“We almost got the whole face in one day,” Kennedy recalled. They bivouacked overnight on a narrow ledge. The next day all three reached the summit.

“Jim carried the day when we got into the nitty gritty,” he said. “He was the driving force.

“It was just fabulous,” Kennedy said. “It felt like winning a gold medal in the Olympics.”

The descent was more somber, going down the west slope, where the avalanche had killed the five climbers nearly seven years before. The young men lost on Mount Cleveland had been MSU students — Jerry Kanzler, 18, Jim Anderson, 18, of Bigfork, and Mark Levitan, 20, of Helena, and climbers Clare Pogreba and Ray Martin, both 22 and from Butte.

Where the bodies had been found, Kennedy and his two climbing partners filled water bottles from a stream and made a toast. Hot and sweaty, they stripped down and got under a waterfall.

“It was just the perfect thing to do,” he said. “It was kind of a ceremony, cleaning ourselves of Mount Cleveland. It was closure, good closure.”

Kennedy would go on to spend his life following his passion for climbing. In 1979 he and Jim Kanzler would make a first ascent of Glacier’s Mount Siyeh. The north face of Mount Cleveland was widely considered “the most difficult technical mountaineering project in Glacier Park,” the Flathead Beacon reported. Mount Cleveland and Siyeh have been described as the two tallest technical rock faces in the Lower 48 states.

Kennedy became a climbing ranger in Rocky Mountain Park, a guide in Colorado and in the Yukon. He would climb the South Buttress of Mount Denali and Ama Dablam in Nepal.

“I’m happy I lived to write this book,” he said. “I think all climbers realize, ‘In an instant I could be gone.’”

So why do they risk everything? To prove something?

“Yes — proving yourself to yourself,” Kennedy said. “And from time to time, cheating the hangman.”