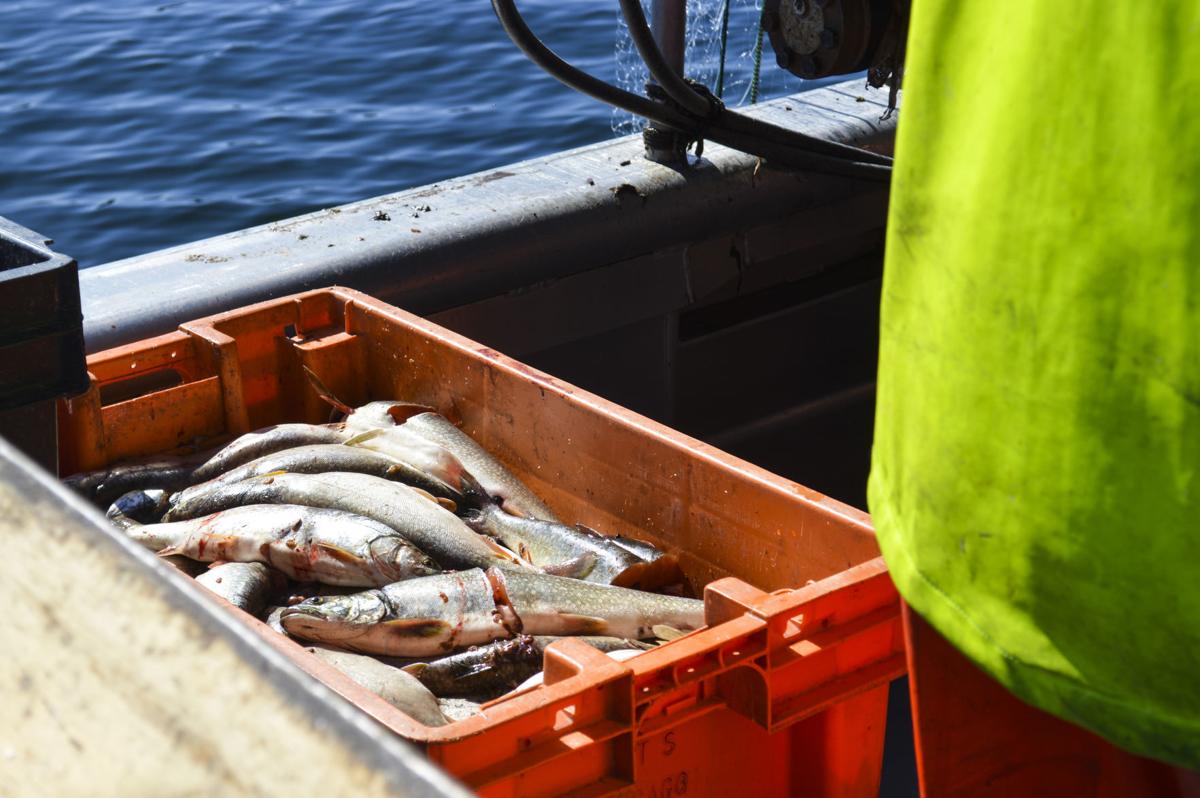 Dead lake trout from Yellowstone Lake sit in a tub on a gillnetting boat. 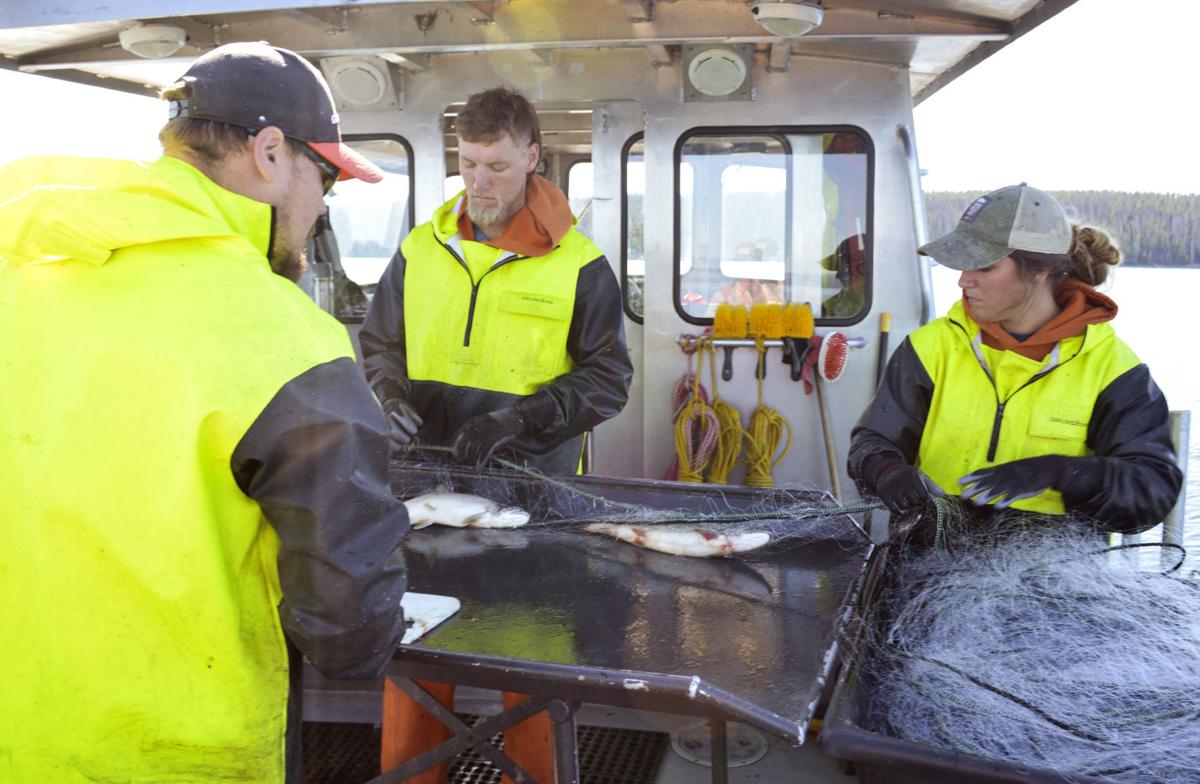 A crew pulls in a gillnet on Yellowstone Lake. 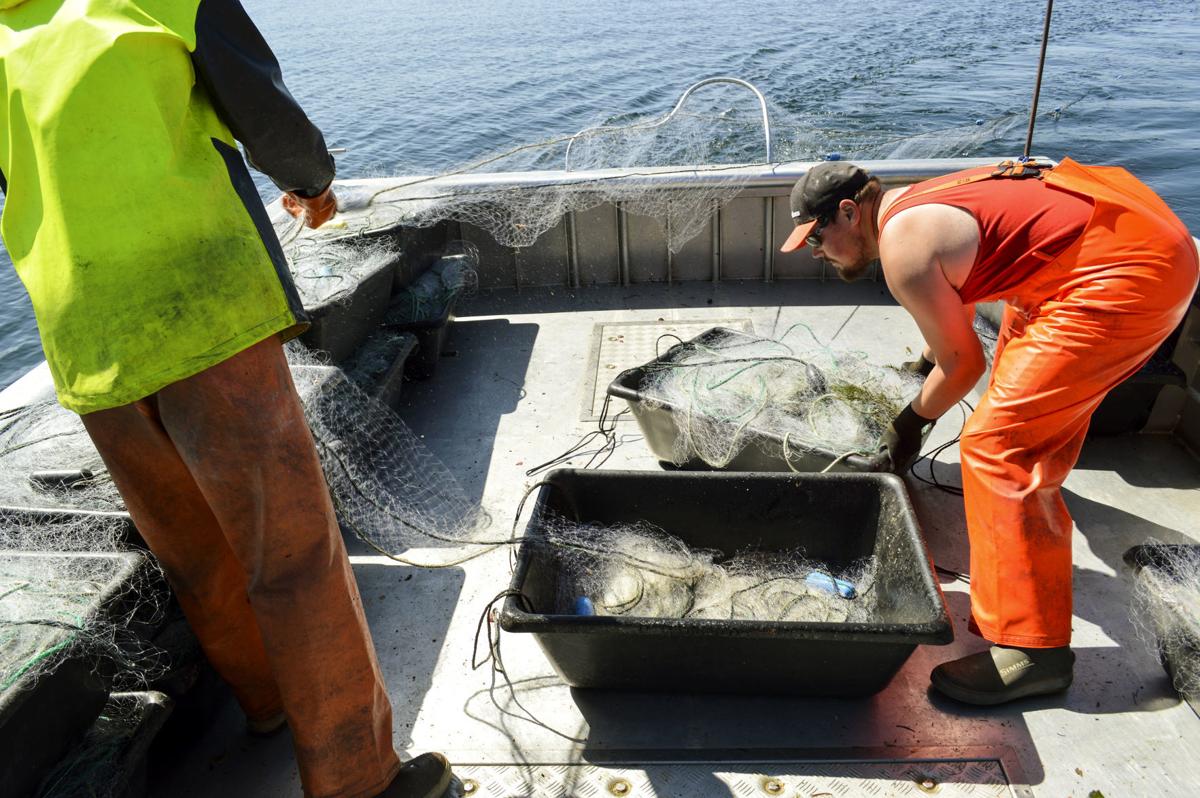 Mark Kundzins, right, moves a box of net around on a gillnetting boat on Yellowstone Lake while Cory Dick makes sure it lays out correctly. 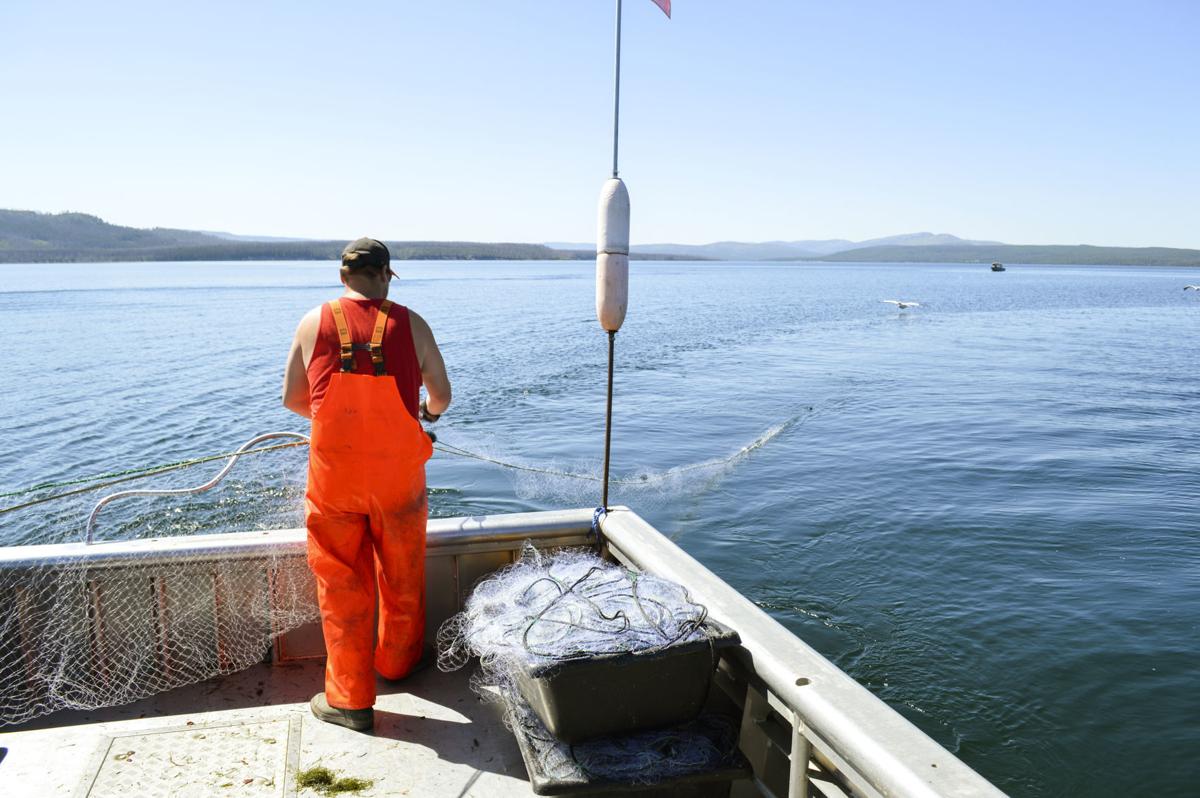 Mark Kundzins works a gillnet as the crew sets it on Yellowstone Lake. 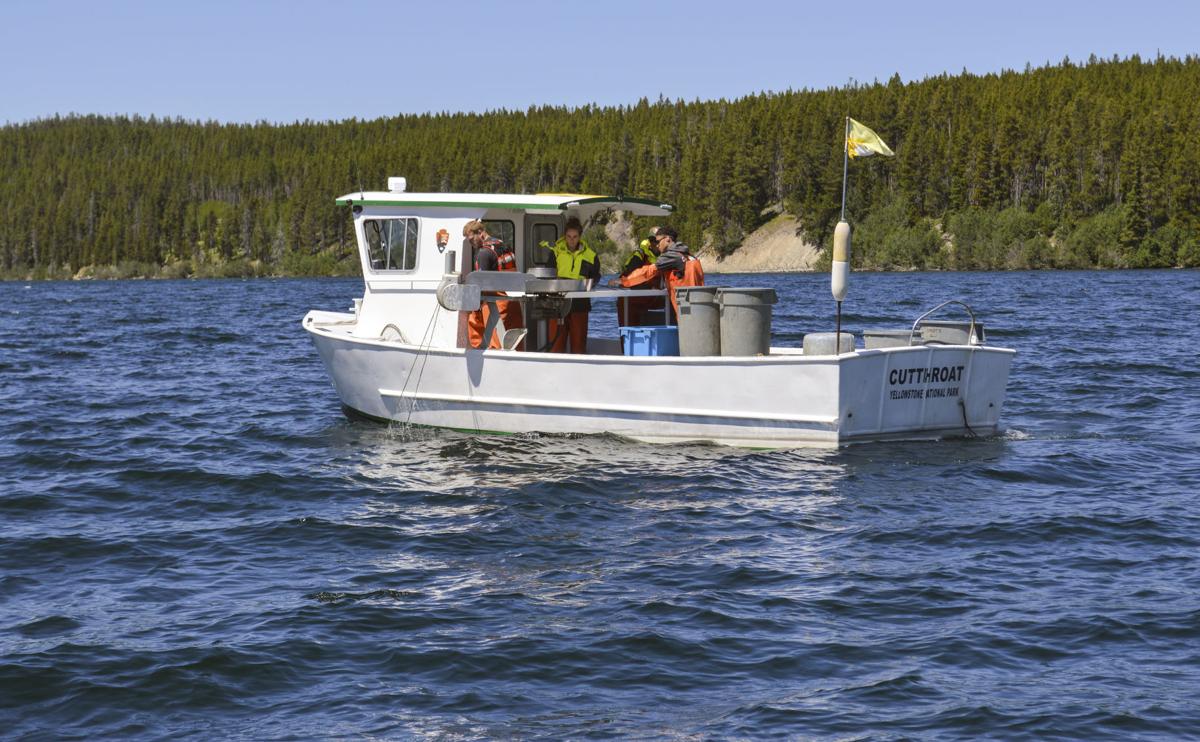 A National Park Service crew hauls in a gillnet on Yellowstone Lake.

Dead lake trout from Yellowstone Lake sit in a tub on a gillnetting boat.

A crew pulls in a gillnet on Yellowstone Lake.

Mark Kundzins, right, moves a box of net around on a gillnetting boat on Yellowstone Lake while Cory Dick makes sure it lays out correctly.

Mark Kundzins works a gillnet as the crew sets it on Yellowstone Lake.

A National Park Service crew hauls in a gillnet on Yellowstone Lake.

YELLOWSTONE LAKE — The motor clicked rhythmically as it pulled four miles of net from the lowest depths of the lake here, where the net was set a few days prior in hopes of killing lake trout. A four-person crew worked quickly, untangling fish as they came up with the net. Once untangled, the fish were passed to the person holding a knife. He punctured their swim bladders and threw them in a plastic tub, where the casualties piled up and dried out in the hot July sun.

When a Yellowstone cutthroat came through — there are often a few, and they’re often huge — the crew tried to save it. If it still had life left, they released it to the lake, hoping the pelicans hanging around the boat won’t get to it in time. When the cutthroat didn’t have life left, it landed in the tub.

The crew, from Wisconsin-based Hickey Brothers Research, doesn’t like seeing big cutthroat die. It doesn’t happen often, but it happens. It’s just part of the equation behind this big operation, the $2 million a year effort to cull as many lake trout as possible from Yellowstone National Park’s namesake waterbody.

It’s been 25 years since lake trout were confirmed to be here, and fisheries officials say they’re coming out on top. More than 3.1 million have been killed in total, including about 150,000 so far this year.

Todd Koel, Yellowstone’s supervisory fisheries biologist, said that’s a bit behind the total at the same time last year, which is a good sign.

Winning, yes, but the war isn’t close to over. Koel said they plan to keep the same level of netting effort or more for the next few years. That means about 6,000 miles of gillnets each season, which runs from spring to fall. They’re also working on new methods for killing the fish before they even hatch.

How the fish got here is still not known. The nonnatives were stocked in a few other lakes around the park, but there aren’t any definitive answers as to why park officials confirmed the existence of lakers here in 1994. By then, Koel said, the fish had probably been here for years, and there were probably thousands of them.

Lake trout are known to eat other fish, so the big battle began quickly because of what was already in the lake.

At first, the lake trout population grew, a phenomenon that coincided with a crash in the cutthroat population. That trend continued until 2012, when it started swinging the other direction.

The people setting the nets have noticed, too. Tom Short, captain of a private boat run by Hickey Brothers Research, a park contractor, is in his seventh year on the lake. It’s not as easy to find lake trout now.

“When I first got here, you could set gillnets any-ol’-where in the lake and you’re going to catch fish,” Short said. “Anymore, they’re just on the best habitat.”

How the battle is fought is changing, too. Instead of relying only on gillnetting, park officials are exploring ways of disrupting spawning by covering eggs to deprive them of oxygen. They’ve found 14 spawning sites in the lake, and they’re trying this out in a couple different ways on a few of them.

One involves the tubs of carcasses. After his crew was done pulling the net last month, Short motored to a spot south of Frank Island. Once the boat was at the dumpsite, he instructed the crew to empty the tubs into the water. The idea is that the carcasses, with the swim bladder punctured, will sink to the bottom and cover up a spawning site, making it impossible for lake trout to reproduce there.

Farther south, Koel pointed out a site near Promontory Point where they’re trying the same idea but with specialized pellets.

These efforts won’t erase the need for gillnetting. But Koel is hopeful they could help them reduce the amount of netting necessary each year. First, he said, they want to reach a point where there’s about 100,000 lake trout here, a level they think could be more sustainable to keep cutthroat alive.

Even if they get there, the war won’t be over.

“There’s no way to get rid of these lake trout,” Koel said. “We’re always going to have to do something to suppress the population.”