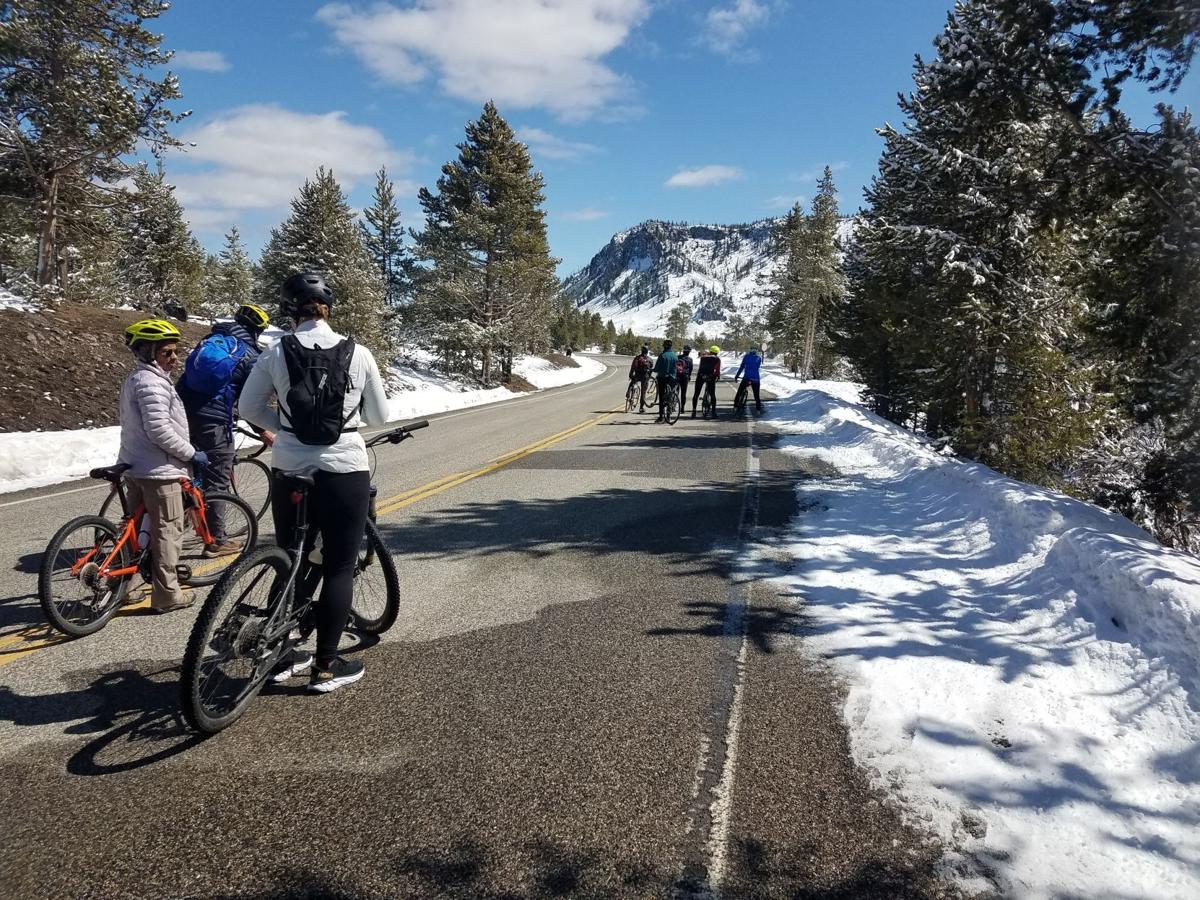 Cyclists wait for a herd of bison to cross West Entrance Road in Yellowstone National Park on April 9. There were multiple bison jams on park roads on April 9. 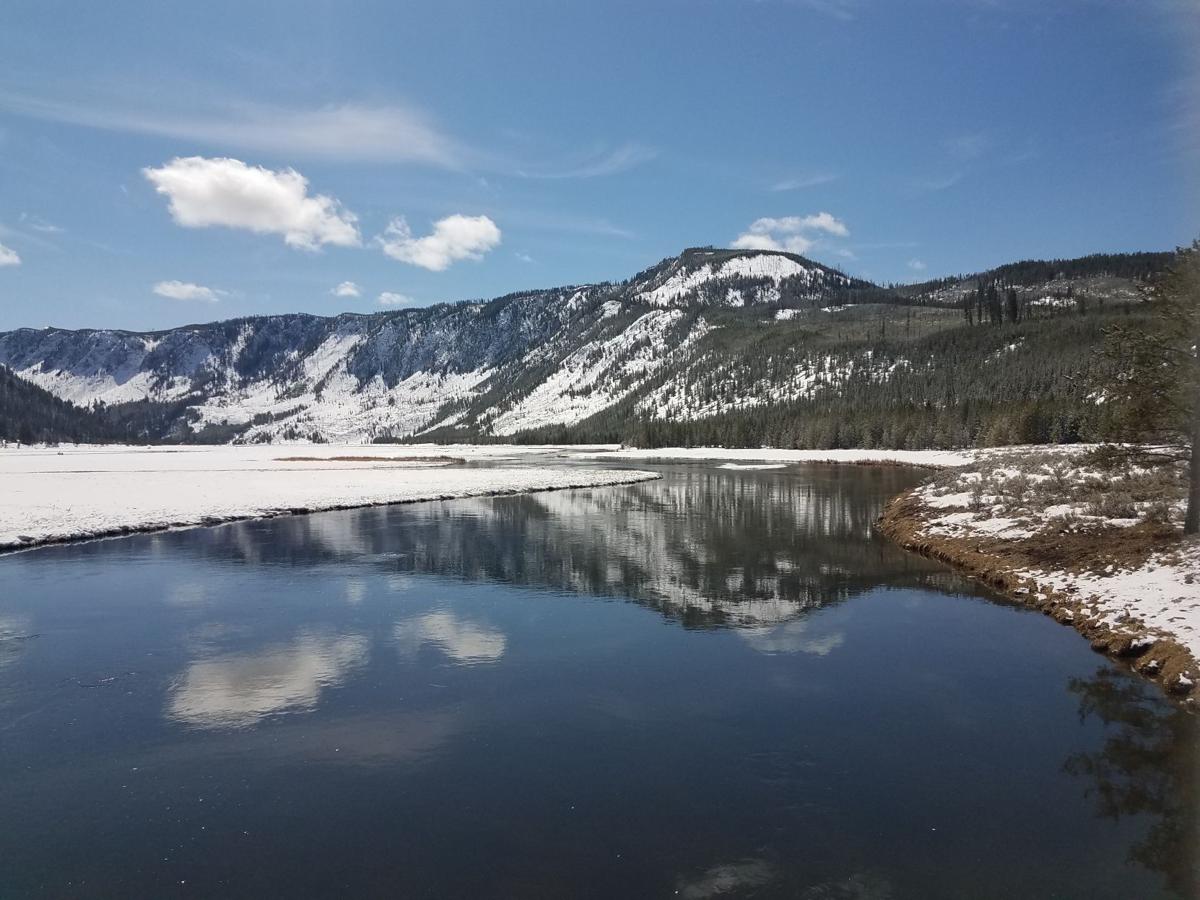 The Madison River reflects mountain scenery at a bridge along West Entrance Road in Yellowstone National Park. The bridge was a resting point for many cyclists traveling along park roads on April 9. 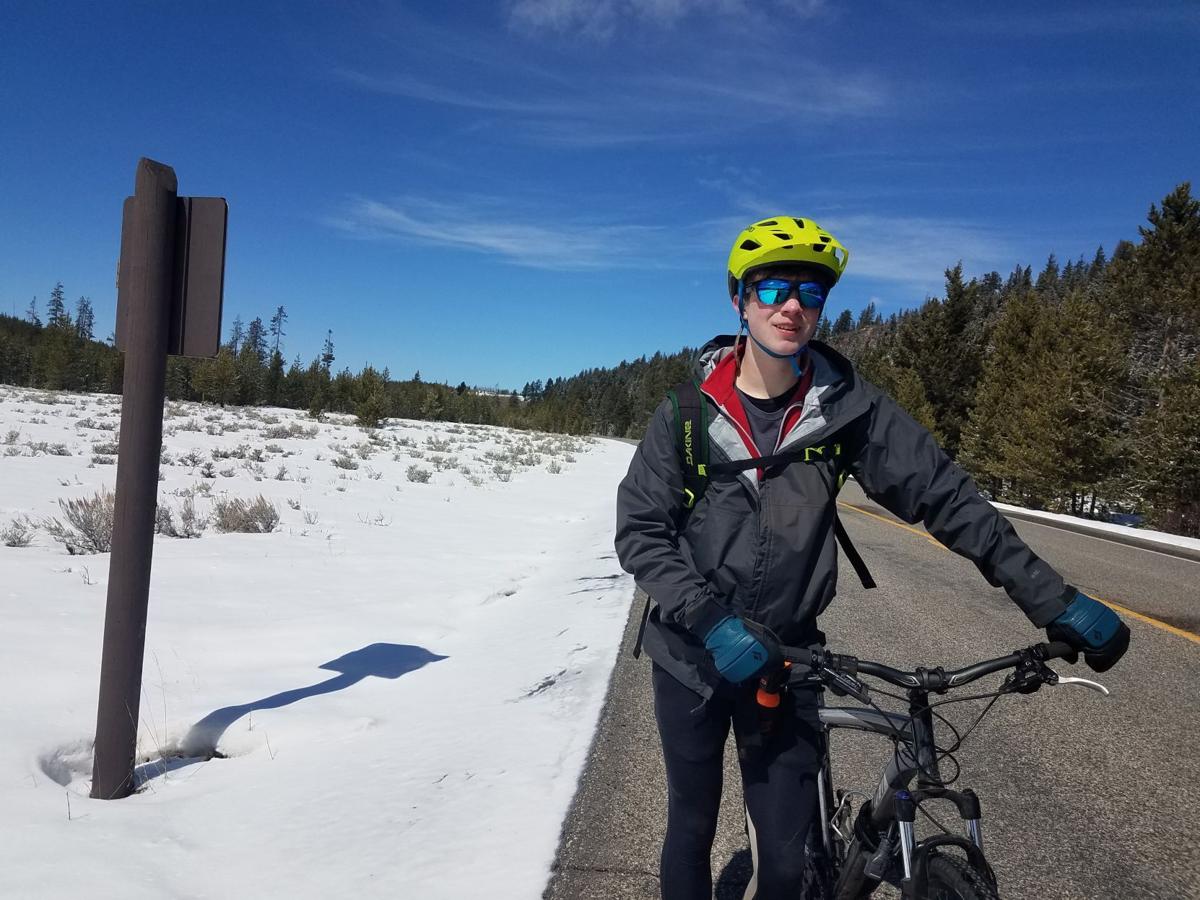 Calvin Dore, brother of Helena Dore, pauses to enjoy the scenery in Yellowstone National Park on April 9. Park officials announced some roads would reopen to vehicles on April 16. 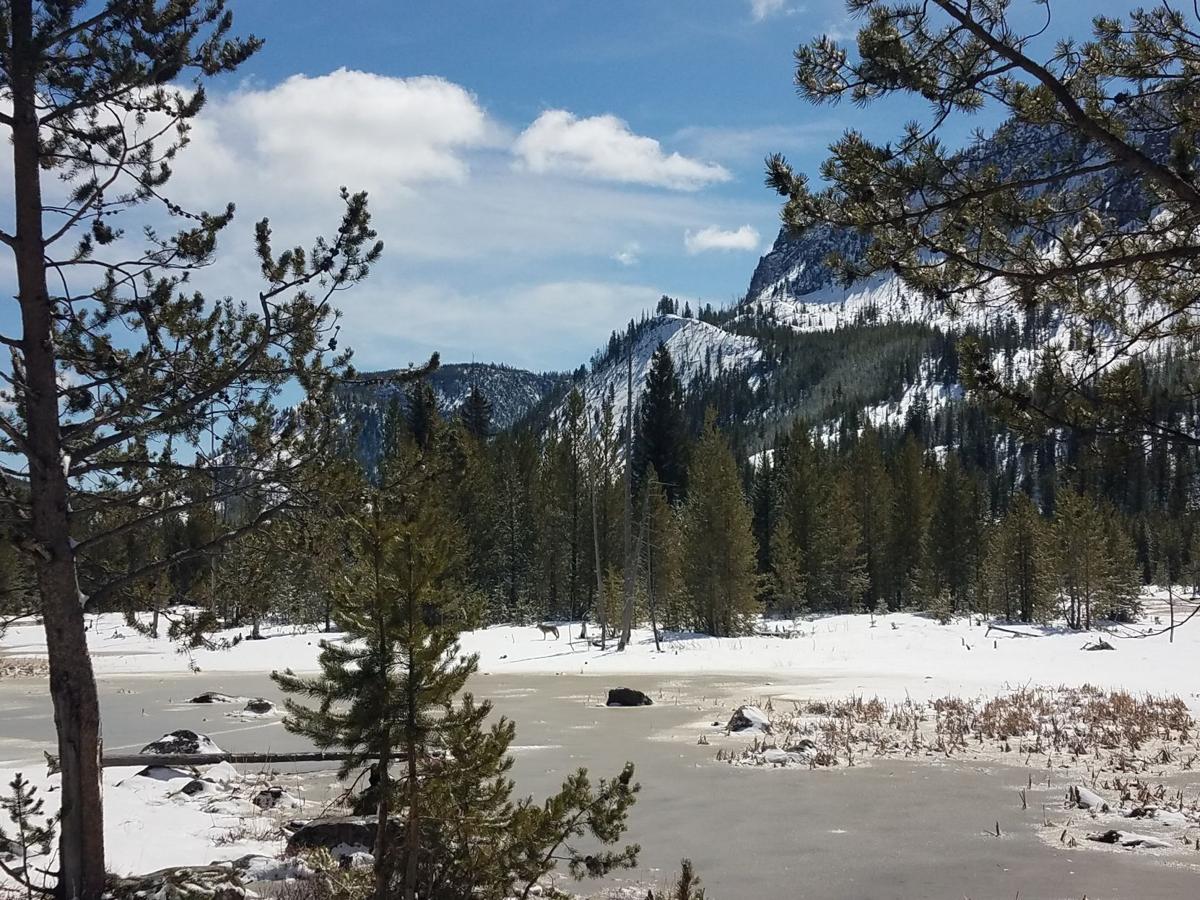 A coyote peers toward West Entrance Road in Yellowstone National Park on April 9. The animal approached the road as if to cross it, but ultimately ran back into the trees. 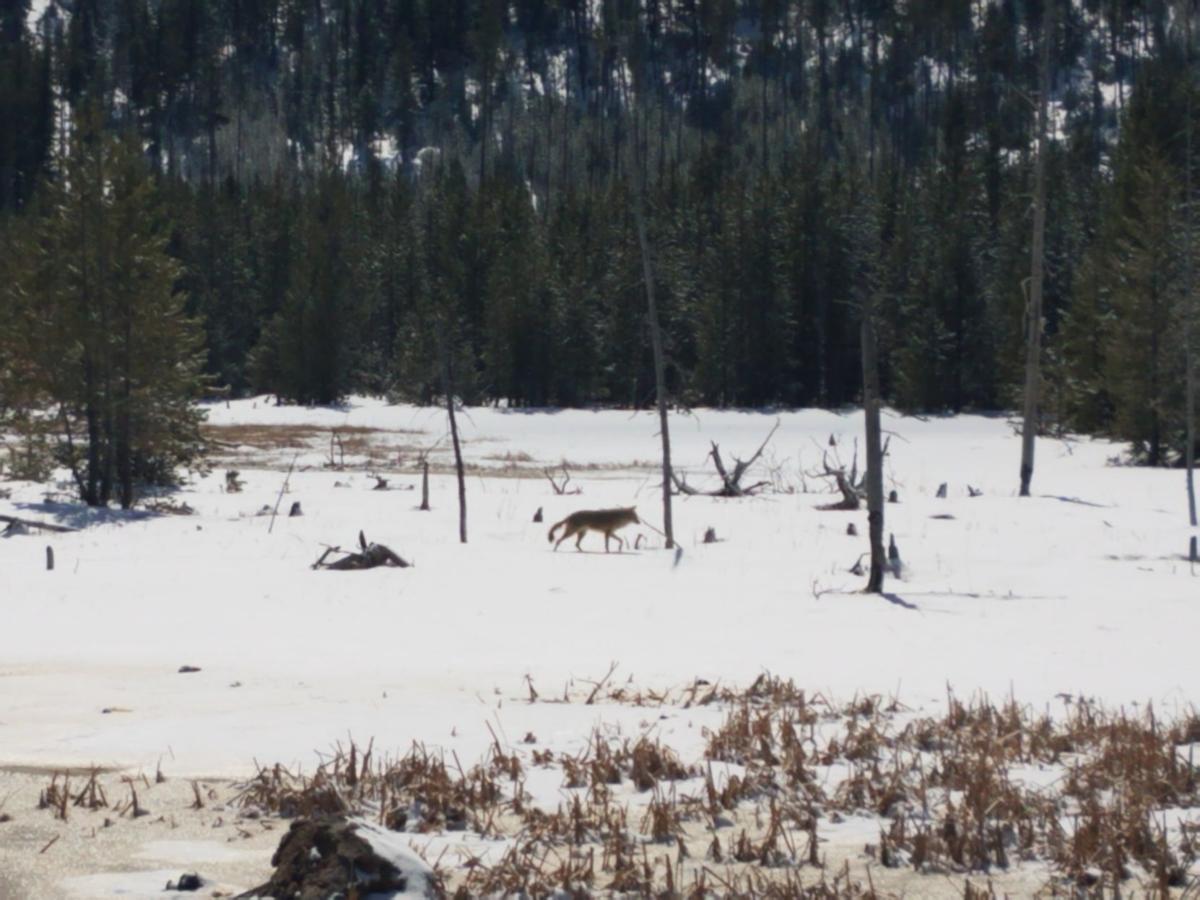 A coyote in Yellowstone National Park limps across a weak layer of snow and ice near the Madison River. It's paws broke through the surface several times. 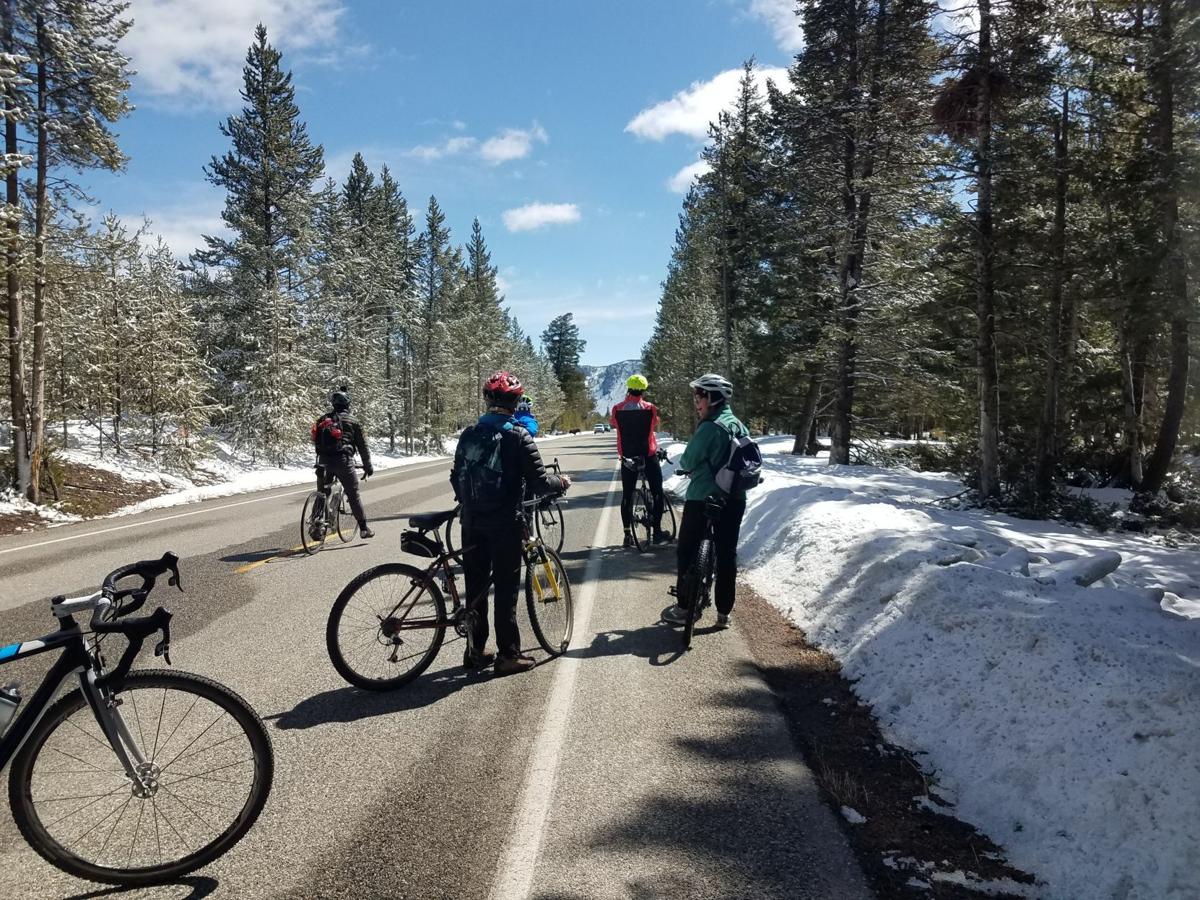 A bison jam in on a Yellowstone National Park road brought cyclists to a halt on April 9. Travelers waited for the group of approximately 10 animals to cross West Entrance Road before resuming their journeys. 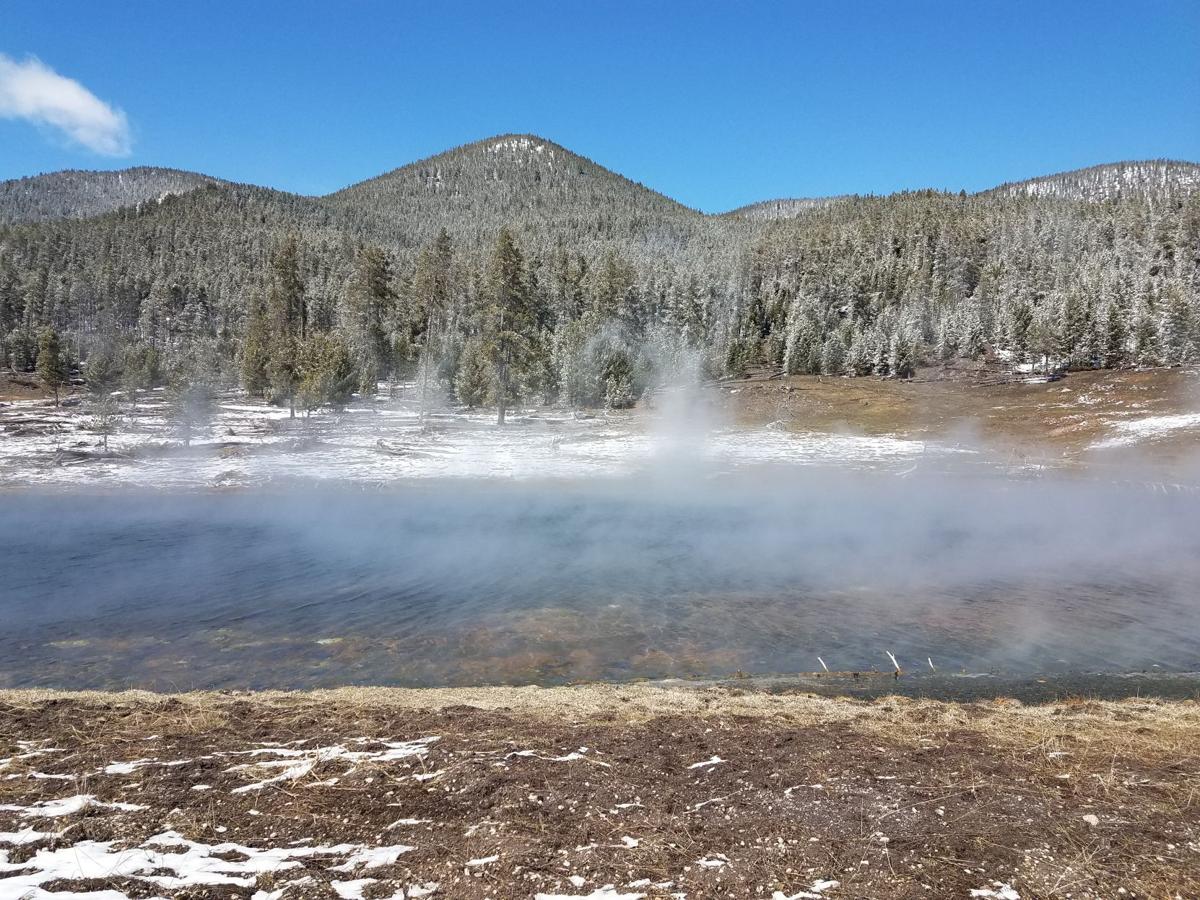 Steam blows over the boardwalk around Terrace Spring just past Madison Junction in Yellowstone National Park. A bison was grazing near the spring as cyclists passed by on April 9. 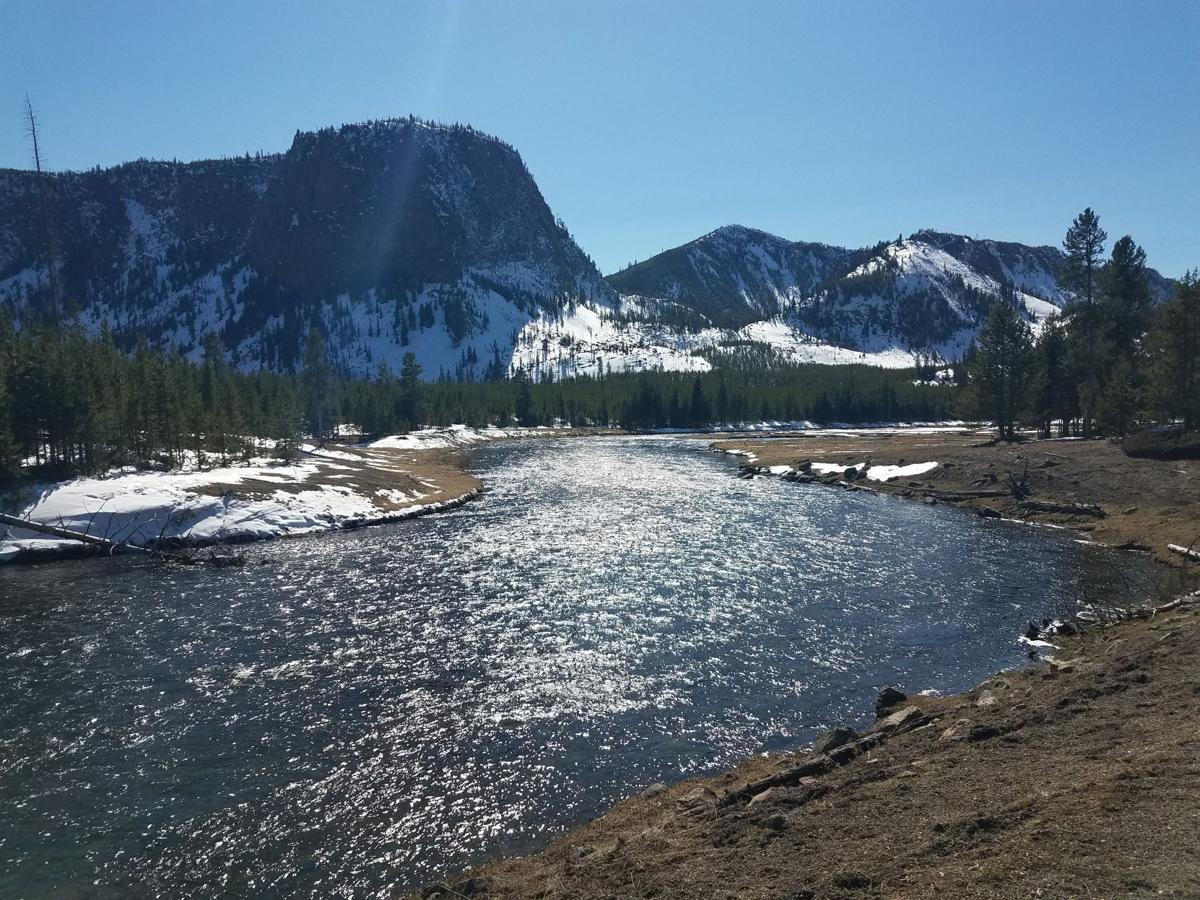 Gibbon River winds through a canyon in Yellowstone National Park approximately two miles below Gibbon Falls. Temperatures on the west end of the park on April 9 ranged from just above 20 degrees to around 45 degrees. 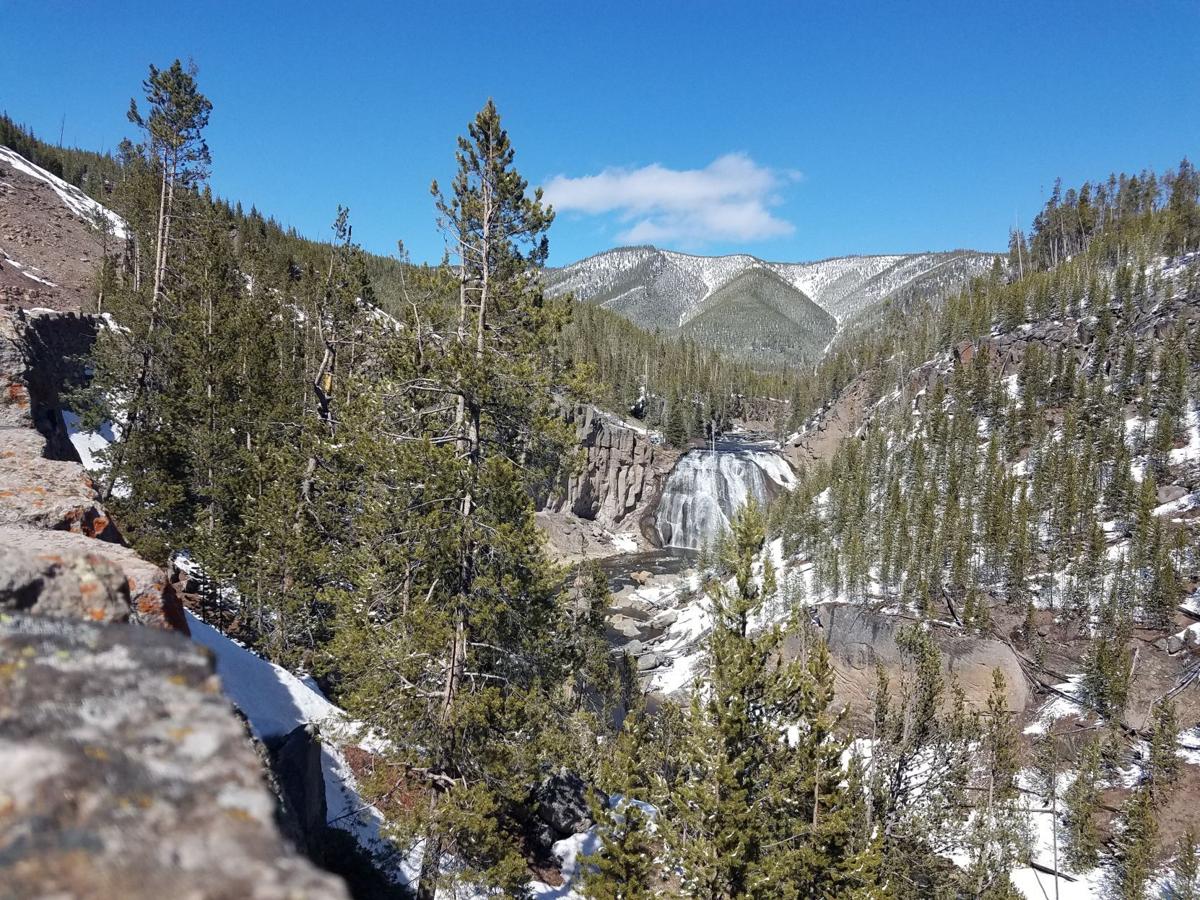 Water tumbles down Gibbon Falls approximately five miles east of Madison Junction on April 9. Grand Loop Road by the falls was one of the steepest sections of park roads for cyclists traveling from West Yellowstone. 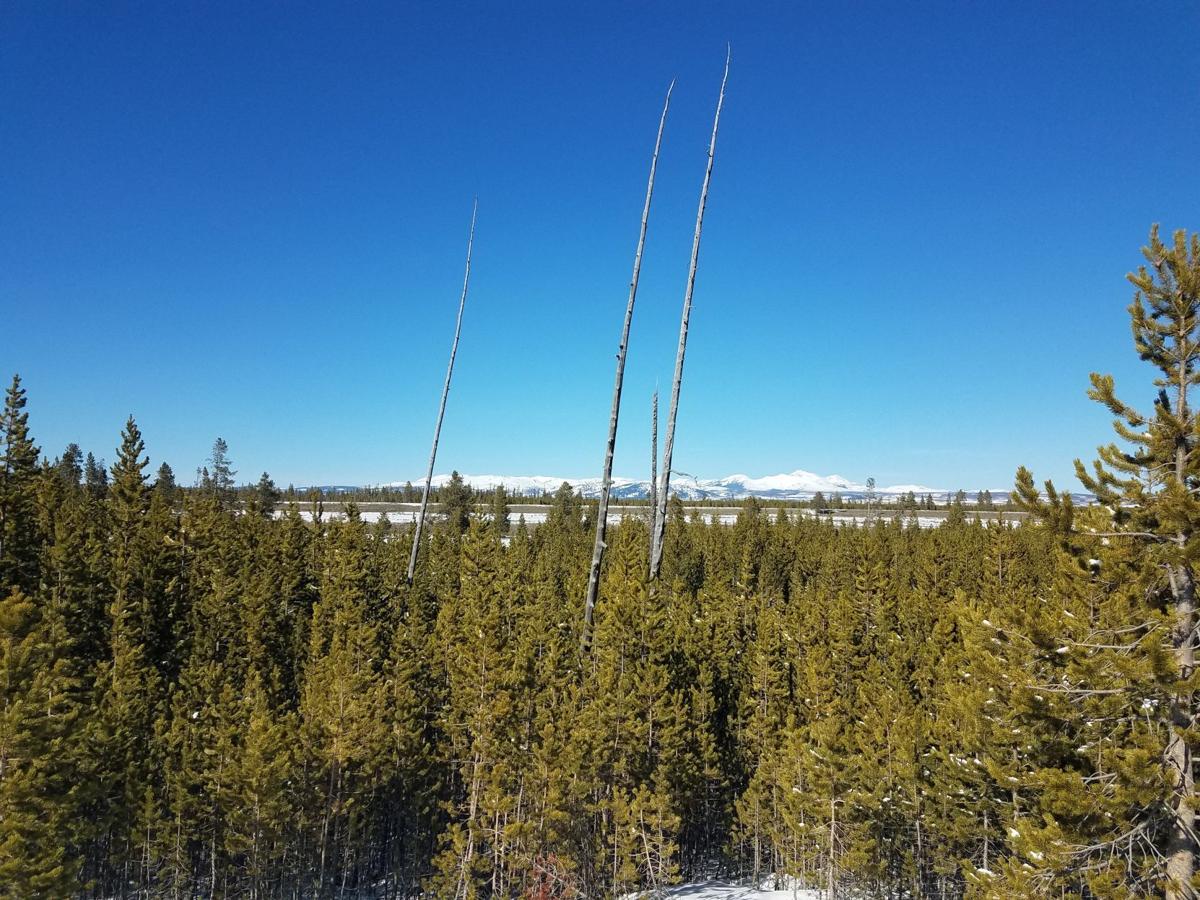 Snowcapped mountains peak out from budding pine forests near the west entrance of Yellowstone National Park on April 9. A headwind and a slight uphill grade made travel more difficult on the journey back from the park's interior.

The Madison River reflects mountain scenery at a bridge along West Entrance Road in Yellowstone National Park. The bridge was a resting point for many cyclists traveling along park roads on April 9.

A coyote peers toward West Entrance Road in Yellowstone National Park on April 9. The animal approached the road as if to cross it, but ultimately ran back into the trees.

Snowcapped mountains peak out from budding pine forests near the west entrance of Yellowstone National Park on April 9. A headwind and a slight uphill grade made travel more difficult on the journey back from the park's interior.

We started our biking adventure through Yellowstone National Park with a dilemma: a hub cap from my brother’s bicycle had fallen off and was missing.

It wasn’t an obstacle I was expecting. I had grossly over-prepared for extreme weather and animal encounters.

I wore cycling shorts over leggings, a t-shirt over a turtleneck, a helmet over earmuffs, gloves over gloves and a canister of bear spray awkwardly slung across my backpack. My younger brother, Calvin, looked just as disjointed.

We recovered the missing bicycle part after a 30-minute search through my car. It meant we could leave the park’s west entrance in the morning, albeit later than planned.

There’s a small window between late March and early April when park visitors can cycle through Yellowstone. Only employees, contractors, plows and park administrators use vehicles on the roads at this time.

This spring, roads connecting the park’s west entrance with Mammoth Hot Springs — around 50 miles — opened to bicycle traffic on March 31. Yellowstone officials plan to open some park roads to vehicles on Friday.

West Entrance Road from West Yellowstone was the path we took Friday. A ride along the Madison River seemed more appealing than an uphill slog from Mammoth Hot Springs.

It was 20 degrees early Friday morning, but temperatures warmed throughout the day.

Calvin and I had a loose plan. We’d go for as long as we felt like going and come back the same way. We’d try not to be attacked by a bear or charged by bison in that time.

We had traveled through Yellowstone by car years ago, but the experience and scenery on Friday felt novel. It included views of budding pine forests, snowy canyons, steaming thermal features and mountain ranges that I failed to properly identify.

The ride also featured a lone coyote, though we tried to convince ourselves that it was a wolf.

Doug Warner, a Bozeman resident who regularly bikes through Yellowstone in the spring, said he likes biking from the park’s west entrance because of the light rolling hills and frequent encounters with wild bison, of which we saw plenty.

The route is much more fun than starting at Mammoth, which immediately treats travelers to a grueling hill, he said.

This year, Warner rode into the park on April 2. Like he’s done for the past 15 years, he looked for a day with opportune weather and took the time off work. It’s like when downhill skiers take powder days off, he said.

He thinks biking through Yellowstone is one of the best things for people to do in the spring when most trails are muddy.

The ride is also a great opportunity for a much closer experience with wildlife, according to Warner.

“It’s part of the fun and adventure of biking through the park,” he said.

Warner encountered three bison jams on his journey to and from Madison Junction this year. To Warner, bison can get spooked when they see bicyclists speeding toward them, so it’s important to give the animals lots of space.

On a bike ride years ago, Warner surprised a bison that appeared to be sleep-walking near the edge of a road. It “freaked out” when he passed it on his bicycle, he said. Sometimes he walks his bicycle to avoid spooking the large animals.

We hit two bison jams during our Yellowstone trip. About 10 miles from the west entrance, we joined a crowd of cyclists waiting for bison to cross the road. We did the same thing a few miles later.

For Lindsey Anderson of Rigby, Idaho, seeing bison was one of the highlights of her ride through Yellowstone on Friday. She’d never biked in the park, but has done some biking around Jackson, Wyoming.

Anderson decided to give the trip a go this year after doing some research on the park’s spring season. She was happy to have seen bison and ducks, but was hoping to see a bear from afar.

Calvin and I had not planned to bike 42 miles in one day, but after passing Gibbon Falls, which is 5 miles past Madison Junction, we realized how far we’d traveled. We sped back against a headwind, finally limped across the west entrance at 5:30 p.m.

Good thing we found that hubcap.