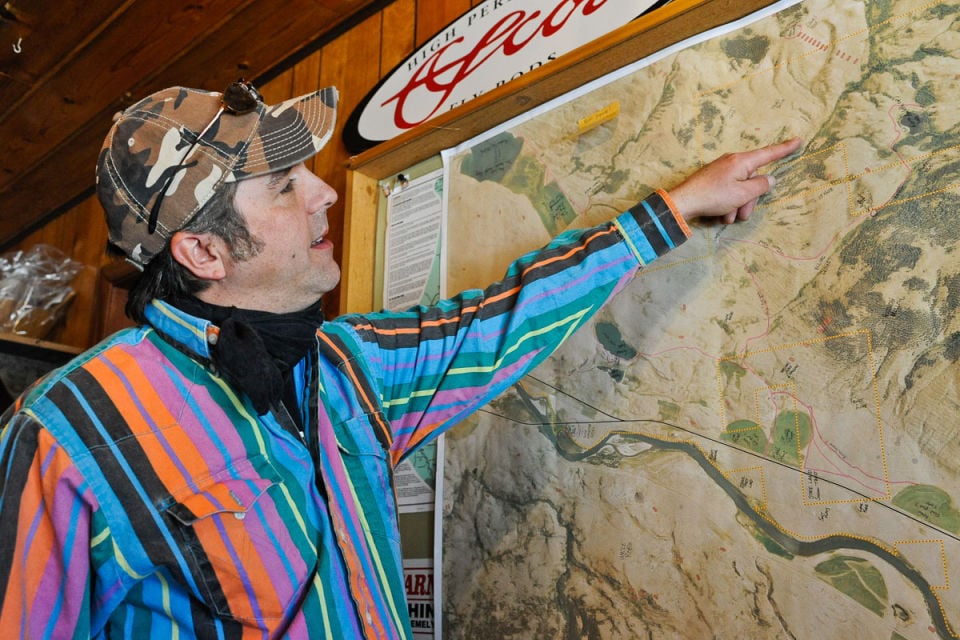 Jim Klyap, Dome Mountain Ranch manager, points to the route taken by Department of Livestock riders searching for a bison, 10 miles north of Gardiner, Tuesday, April 23. They killed the bison on April 12 because it had strayed outside a tolerance area. 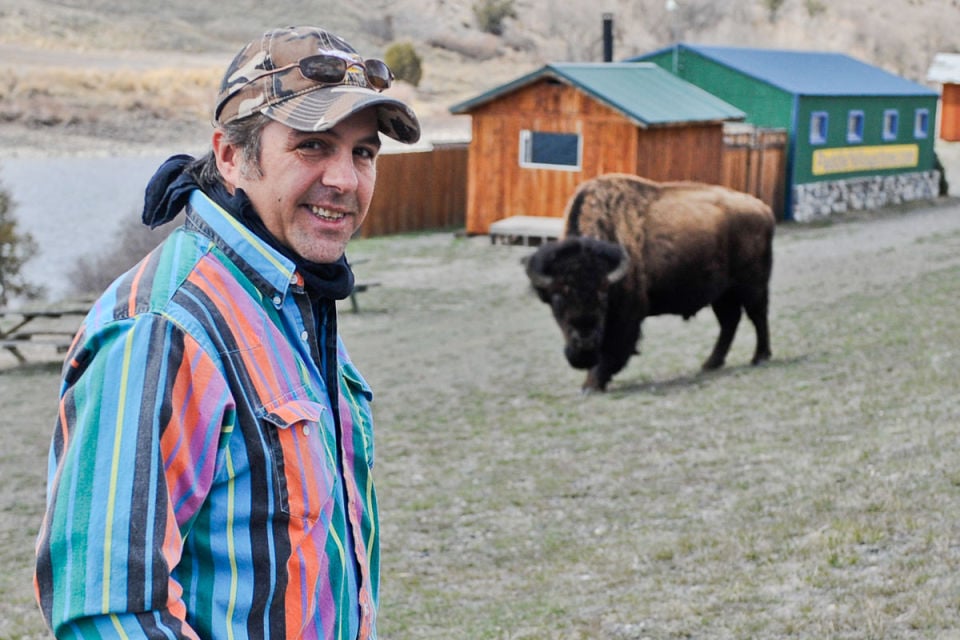 Jim Klyap, Dome Mountain Ranch manager, avoids a bison just a few miles south of the bison tolerance boundary near Gardiner on Tuesday, April 23. A bison had wandered onto the Dome Mountain Ranch and was shot by Department of Livestock riders on April 12.

A bison caught with a motion sensor camera grazing on Dome Mountain Ranch property, north of the bison tolerance zone on April 11 and 10 miles north of Gardiner. The bison was shot a day later by Department of Livestock riders.

Courtesy of Jim Klyap
1 of 2

Jim Klyap, Dome Mountain Ranch manager, points to the route taken by Department of Livestock riders searching for a bison, 10 miles north of Gardiner, Tuesday, April 23. They killed the bison on April 12 because it had strayed outside a tolerance area.

Jim Klyap, Dome Mountain Ranch manager, avoids a bison just a few miles south of the bison tolerance boundary near Gardiner on Tuesday, April 23. A bison had wandered onto the Dome Mountain Ranch and was shot by Department of Livestock riders on April 12.

GARDINER – The bison was past his prime but still strong enough to trudge miles in search of a territory of his own.

He wandered north along the highway out of Yellowstone National Park as March brought warmer weather. His black eyes cautiously watched the speeding cars as the hills closed in, forcing him ever closer to the road as he neared Yankee Jim Canyon 15 miles northwest of Gardiner.

At that point, he was already farther north than any wild bison had been allowed since 1947, due to a newly expanded bison-tolerance area dubbed “Zone 2.” But he didn’t stop there.

Veering away from the canyon, he left the safety of Zone 2, picking his way 2,000 feet up over the saddle that rolls east of Dome Mountain.

He emerged into high meadows that are part of the privately owned Dome Mountain Ranch, where he found himself among vibrant bunch grasses and native forbs.

“He must have thought he’d found the Promised Land because he just stayed there,” said Dome Mountain Ranch manager Jim “J.B.” Klyap.

Two weeks later, he was dead, shot by agents of the Montana Department of Livestock.

Klyap was made aware of the bull on March 30.

That’s when antler hunter Eric Wandishin topped a rise and stopped in surprise as he spotted a lone bison dwarfed in a wide meadow on the 5,000-acre ranch.

Klyap was not surprised that a bison finally slipped over the saddle.

“People see the way bison are in the park and think they go up the roads. But bison act differently once they’re out of the park,” Klyap said.

A week or so later, Klyap and his wife went in search of the bison, and he rigged a motion-sensor camera in the meadow where Wandishin had seen the bison.

“Lynn and I looked for him for two days,” Klyap said. “Based on the photos I got, I must have walked right by him.”

Marketed as a hunting destination, Dome Mountain Ranch has no cattle and is “bison-friendly.” But Klyap knew the ranch was officially out-of-bounds for bison.

In 2012, the partners of the Interagency Bison Management Plan explored the possibility of extending the winter area for bison outside the park. The partners include representatives from the park, Montana Fish, Wildlife & Parks and the Department of Livestock, among others.

The IBMP was created in 2000 to “maintain a wild, free-ranging population of bison,” so the partners concluded an extended migration area would support that. Almost every winter, bison try to migrate out of the park to find better grazing or to drop their calves.

In December 2012, the IBMP opened up eight more miles of the Yellowstone River canyon northwest of Gardiner, creating the horn-shaped Zone 2 that ends at the base of Dome Mountain.

“We drew the line there, because once they get over that divide, there is no topography to stop them from moving farther into the Paradise Valley,” said Pat Flowers, FWP Region 3 supervisor and IBMP member. “Once they leave Zone 2, it’s ultimately the state vet’s call.”

Klyap set his camera on April 10, but had to leave for the East Coast the following day. Worried about the bison’s fate, Klyap spread the word to a few people. In retrospect, he said, he misjudged one person’s loyalty.

Many cattle ranchers opposed the creation of Zone 2.

The IBMP is also tasked with protecting cattle from brucellosis, which bison cows can carry. But cattle can get the disease only by contacting an aborted fetus.

So every year, state riders haze bison back into the park in mid-May to prevent contact with cattle that move onto public-land grazing allotments in the summer.

Livestock groups sued the state to stop the creation of Zone 2, arguing bison posed safety and property threats. Ranchers fear finding brucellosis in their herds but also don’t want bison to damage their fences or to diminish the grass on their allotments.

But in January, a Fergus County district judge ruled in favor of the state, saying toleration of wildlife was part of living in Montana.

The ruling is being appealed.

Rep. Alan Redfield, R-Livingston, ranches 15 miles north of the Dome Mountain Ranch. He recently tried to pass legislation to counter the ruling by giving the DOL more authority to eliminate bison that enter Montana. He said he was relieved when he heard the bison had been shot.

“This is exactly the thing we were worried about. It pushed the chance of spreading the disease further north, even though the elk carry it too,” Redfield said. “It was no surprise that Dome Mountain Ranch tried to keep this secret.”

Since the creation of the IBMP, studies have shown that elk have transmitted the disease to cattle. So wildlife advocates say controlling the disease by confining or killing bison is misdirected.

“They don’t stop elk from crossing over that divide, and elk calve later than bison. That’s the absurdity,” said bison working group member Glenn Hockett. “The main difference is, with elk, FWP is in charge, but with bison, we’ve given authority to the wrong agency.”

DOL executive officer Christian MacKay said he learned about the bull on Dome Mountain from one of his agents on April 10.

“We had a discussion with some of the partners and sent an Interagency team in,” MacKay said. “Lethal removal is required outside the area.”

Flowers said the partners considered hazing the bison back into Zone 2.

“The way I read it, it’s not a requirement to kill them. But he was too far out of Zone 2 to haze back,” Flowers said.

The 2012 Operations Plan states that “bison attempting to move north … will be hazed to other available habitat within the tolerance area, captured, hunted, or if necessary, lethally removed.”

The plan gives DOL the authority of lethal removal outside the park and “all reasonable attempts” must be made to salvage the carcass.

On a gray April 12 morning, FWP game warden Chris Kerin met with two park rangers and two DOL agents on the backside of Dome Mountain, not far from where the bison started his climb weeks before.

On horseback, they too climbed to the saddle and eventually spied the bison three to four miles north of Zone 2.

“Due to where he was, we split up. I rode back down to the trailhead with the park service guys, and the DOL guys rode toward the bison,” Kerin said. “It was DOL’s lead; they were going to go do their thing. We helped find it so we were done with it.”

The DOL is allowed to enter private property without permission to control bison.

McKay said he chose not to send the riders on private property. But Klyap’s camera caught images of the agents riding into the meadow and being surprised by the bison.

Two sections of state land separate the ranch from the FWP-owned Dome Mountain wildlife management area to the north.

MacKay said the riders shot the bison and left the carcass on public land because it was too remote to allow for easy removal. Klyap said they probably hazed the bison to the state-land sections to shoot it.

Klyap continues to search for the carcass, watching for signs like birds circling.

“We want to find him first,” Klyap said. “He wasn’t bothering anyone so why did they have to kill him? I never thought it would happen the way it did.”

It may not be the last time it happens.

Two days after the bull was shot, 41 bison took the same route to Yankee Jim Canyon.

DOL agents eventually hazed the bison across the Yellowstone River, but the following day, the herd returned and started to climb the hills near Dome Mountain.

With two incidents within a month, it’s likely more bison will follow.

Flowers said the IBMP partners would probably soon discuss how to control that movement.

“There aren’t any easy fixes since there’s no single pinch-point where they migrate,” Flowers said. “We don’t know how we’ll deal with that, but we obviously don’t want a large group getting over the top.”

While a mixed herd could be a problem, bulls pose no risk because they don’t carry brucellosis, Hockett said.

“Bulls should be allowed to roam, especially in bison-friendly places like Dome Mountain,” Hockett said. “If you have a reason to intervene, fair enough. But the last option should be lethal control by the government. They hunted this thing down without due cause.”

Flowers said people shouldn’t lose sight of the fact that the bison reached Dome Mountain because he was legally allowed to roam farther in the first place.

“It was an unfortunate outcome, but in some ways, this was a product of the expanded area,” Flowers said. “The reality we face is that there will be limits on bison, and if they go beyond those limits, we will lose some.”

Out of the dozen bills intended to regulate bison during this Legislature, four still survive and two saw action Thursday.

City to hold roundtable on equity, inequality in Bozeman