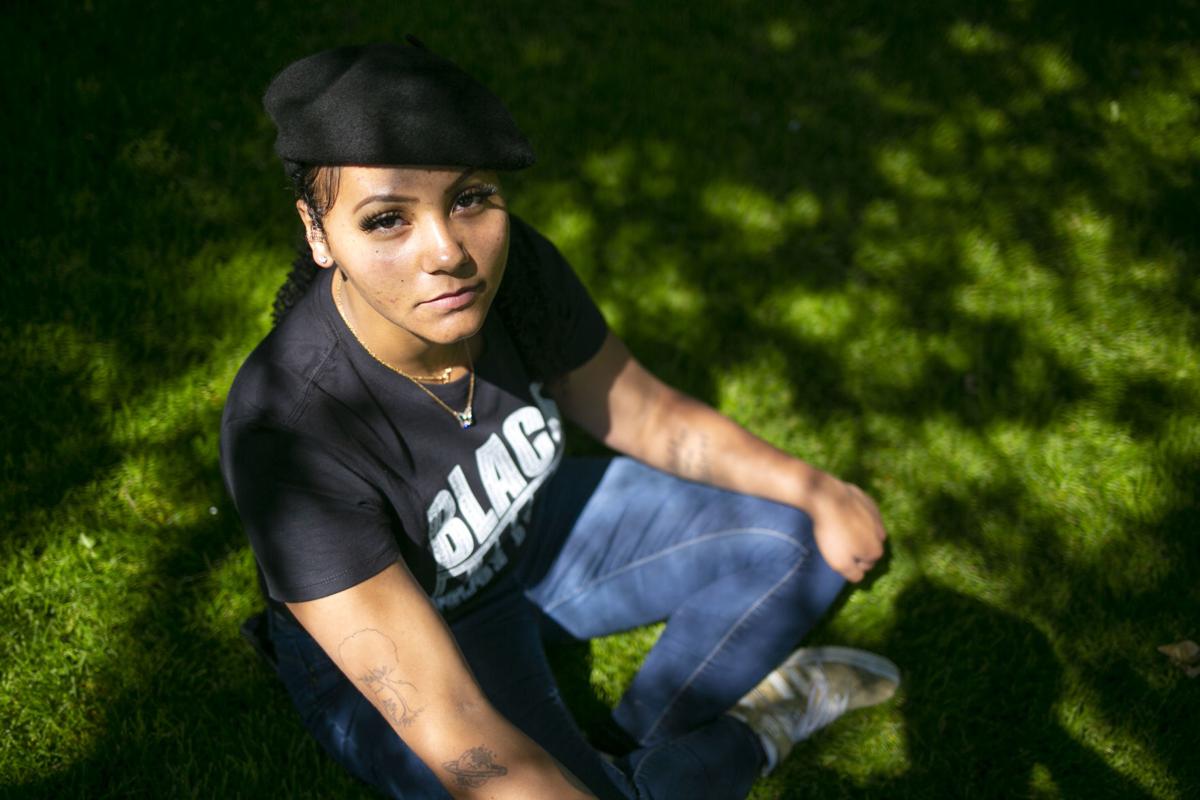 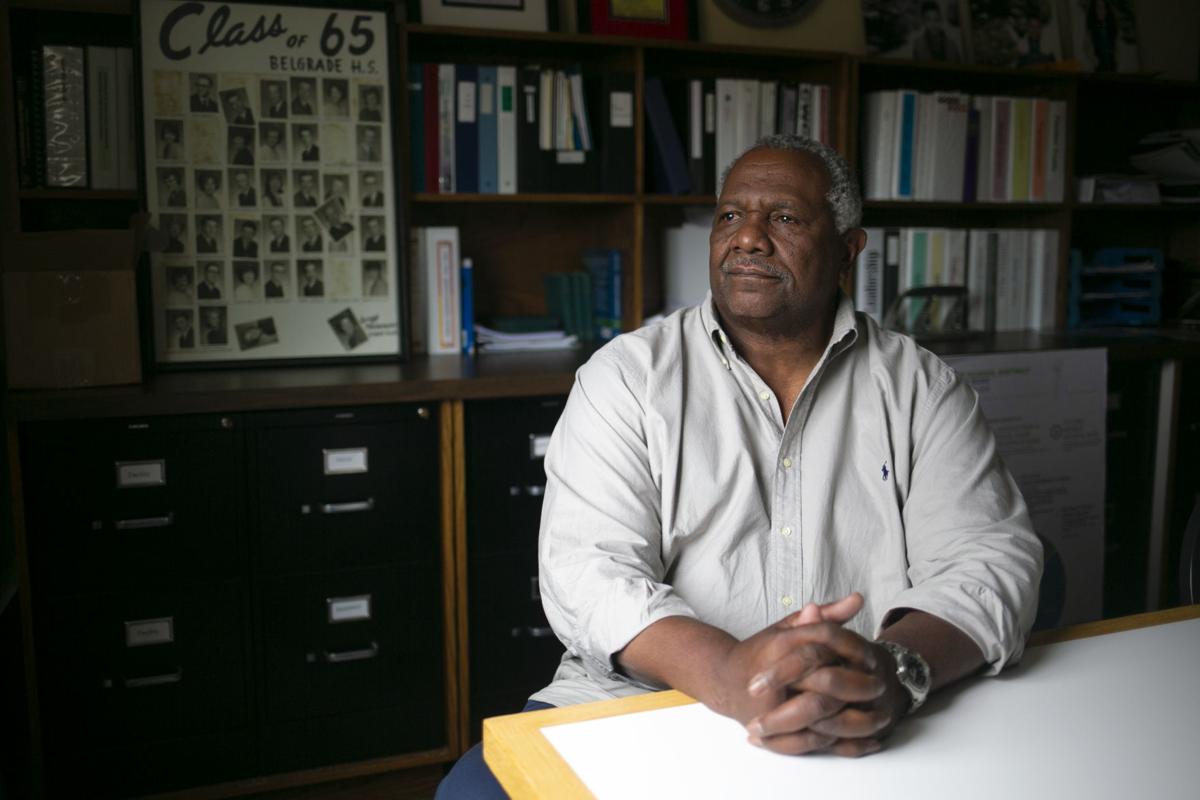 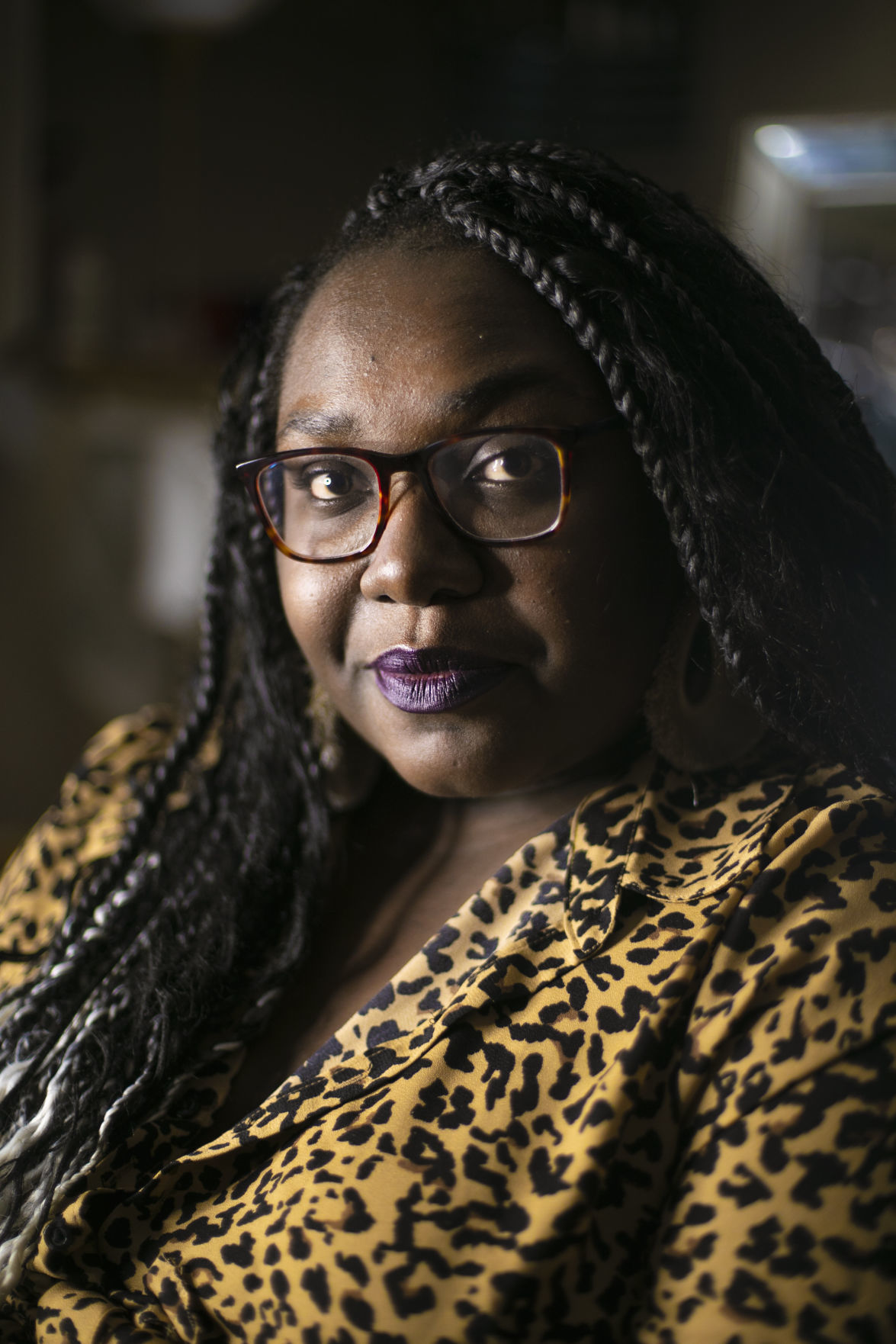 Destini French sits in a barber chair in her basement hair salon, Cultured Roots, Thursday, June 18, 2020, at her home in Bozeman. 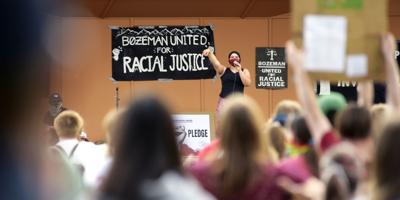 This is the first installment in a Chronicle series about what the worldwide protests over the treatment of people of color mean for Bozeman.

Organizers for Bozeman’s Black Lives Matter rallies didn’t know what to expect when they started planning the first one, two days in advance.

Jessica Brito, the treasurer for the Black Student Union at Montana State University, said they thought they’d be lucky if a few hundred people showed up. She graduated from Bozeman High School. She remembers being called names when walking the hallways.

“I didn’t think there would be that many of us because … there’s never been any indication that the Bozeman community, like, really strongly cared about this,” she said.

Then thousands showed up. They took to the streets on May 31 and again on June 5, chanting “Black Lives Matter,” “Fight the Power” and “No Justice, No Peace.”

The rallies were a response to a video that showed Derek Chauvin, a former Minneapolis police officer, kneeling on the neck of George Floyd, a Black man, for nearly nine minutes. Chauvin has been charged with murder.

The video sparked outrage around the world — including in places that are predominately white. Video of the incident is one example of what people of color have experienced for decades, and people are blaming law enforcement and the systemic racism ingrained in the country’s history for the injustices.

Floyd wasn’t the first. Neither was Eric Garner. Or Michael Brown. Or Tamir Rice. Or Freddie Gray. Or Philando Castile. Or Breonna Taylor, shot in her home in Louisville, Kentucky, just a few months before Floyd was killed.

Brito and other members of the Black Student Union were happy to see all the support, but they wonder how long it will last. Being anti-racist goes beyond attending rallies, she said, it takes making people of color feel safe, holding people accountable when they say racist things and knowing that racism goes beyond kneeling on a man’s neck.

“It’s hard to say that now will be different,” Brito said.

Montana is predominantly white. White people make up 89% of the population, while Black people make up just .6%. Several people interviewed for this story said that makes them feel like they have to hold themselves to higher standards and often have to advocate for themselves.

They’re aware that if they mess up, they’re being watched under a microscope.

It was evident even as people gathered on Main Street earlier this month. Those who supported the movement peacefully protested the killing of Floyd and other Black people.

A handful of armed white people appeared on the perimeter of the march, holding pistols and rifles, waiting for someone to “mess up.” That didn’t happen. But those who came armed showed that there’s always someone watching.

Tobin Miller Shearer, director of the African-American Studies program at the University of Montana, said that’s been true for a long time.

“There’s correlation between the fewer there are of a given group (of people), the more that group will be held under scrutiny,” Shearer said.

Belgrade Superintendent Godfrey Saunders remembers talks with his parents about the precautions he would have to take, being a Black child growing up in Fort Pierce, Florida. Despite not receiving a formal education, his parents valued education and told him there were more good people in the world than bad.

“They taught us the value of life,” the 66-year-old said.

Saunders said those conversations are similar to the ones he has today with his kids and grandkids.

Saunders graduated from the University of Montana Western in Dillon in 1976 with a degree in science education. He came to the school on a basketball scholarship and because his father often talked about visiting Montana after seeing the state in outdoors magazines — Saunders would eventually bring his father up to fish the Beaverhead River.

“He loved it,” Saunders said.

But Saunders still felt the pressure of being Black in a white place. His first job offer after college was rescinded after the superintendent told the principal who hired him that “she couldn’t stand working with a (N-word).”

He’s held many jobs since in Montana and Oregon, teaching at middle schools, high school and universities, and was the Bozeman High School principal for 12 years.

Saunders said in his 15 years of being in the Gallatin Valley, he hasn’t heard a racial slur directed at him. At this point, he feels he’s outgrown the microscope, that he’s beyond it.

But he knows his kids and grandkids haven’t. They’ve heard the racial slurs. They’ve been called the N-word. He has tried to help prepare them for it, so when it happens they will understand the historical context of the word and why it’s being directed at them.

“It’s a growing time for them,” Saunders said. “You let them know that most people who are that way expect for you to use your fist and not your brain.”

The goal, he said, is for those talks to be unnecessary, but he knows that won’t happen any time soon. It’s a big hope.

‘Queens and kings that we are’

Destini French saw a need for working with textured hair after hearing stories from people of color who were turned away from salons because cosmetologists simply don’t know how to take care of that type of hair.

To most, it may not sound like a huge issue. But when people can’t get basic services because they’re viewed as different, French said, it’s embarrassing and a huge blow to their confidence.

“The hair on your head is a crown, right,” she said. “It’s the first thing that people see when they look at your face.”

French’s business, Cultured Roots, offers an escape for people of color living in a white state. It’s a place to take a break from being under the lens and connect with others while also getting an essential service.

French came to Bozeman nine years ago after she was recruited to play basketball at MSU. It was her ticket to college.

But the Long Beach, California, native blew out her knee in high school and only played her freshman year at MSU before realizing that she’d never fully recover from the injury.

She still finished her degree, graduating in 2015. She’d later teach preschool and coach basketball before starting to braid hair.

“I just like to teach people,” French said. “I have an education part of my business where I’m teaching people about their hair and hair care for their natural hair.”

She said she’s hoping to build a curriculum to teach to moms with Black children or adults who’ve never learned to take care of their hair.

French said she hears from customers about their experiences growing up here and not knowing what to do. She said not only are they dealing with being a person of color but they also have a piece of their body that they’re uncomfortable with.

“We need to be letting the people be able to take care of their crowns so they can feel that self confidence and walk around like the queens and kings that we are,” French said.

In a state that has no professional sports, people often flock to watch college basketball and football games. And Xavier Bishop, an MSU basketball player, embraces the spotlight of being a Black man and having a platform to be a role model.

Bishop is a guard on the basketball team. The roster is a mix of different ethnic backgrounds.

The rallies across the country, Bishop said, have been eye-opening. He feels the conversation about race and equality are important, though he recognizes it’s uncomfortable for many.

He said it’s important to accept people for who they are.

“We just have to find a way that we can communicate with each other and figure things out, make things better,” Bishop said.

Bishop grew up in the inner city. He hopes kids here and back in Illinois follow in his footsteps.

“I know I have a lot of kids back home that look up to me because I kind of showed them how to do things the right way, or I’m trying to,” he said.

Keila Smith, a certified nursing assistant at a Bozeman nursing home, finds herself defending other people of color to residents in Sheridan, Montana, where she grew up, who tell her she’s different and that she’s “basically white with a good tan.”

When Smith, a Black woman, saw the video of Floyd’s last minutes alive, she thought that could be one of her sons when they get older. She uses her familiarity in the town to relate that but still hears comments to “justify why that cop killed” Floyd.

“As a mom, I just feel like it’s our duty to protect our babies,” the 22-year-old mother of two said.

Growing up in a town of about 1,000, Smith felt singled out. Sometimes she wasn’t invited to friends’ birthday parties or over to their houses.

Smith’s mother is white. Her father is Black and lives in South Carolina.

At 12, her mother tried explaining why other kids might call her names.

“You just have to deal with it,” Smith’s mother told her.

Smith didn’t understand it was because of the color of her skin until she lived with her father for a while. He would escort her to the front doors of her school to make sure nothing happened.

At the rallies in Bozeman, Smith held a sign that read “all mothers were called when George Floyd called for his mom.” Her 5-year-old son helped her make it. She said he understands that there are evil people in this world who need to be educated.

The rallies were the first time Smith felt like she wasn’t in the minority.

“That alone was huge to me because I’ve always been the minority fighting for something that everyone else doesn’t see as a problem,” she said.

While she was there, among the faces in the crowd, she saw people from her hometown. To her, that showed that her efforts to educate people on race in the state don’t land on deaf ears.