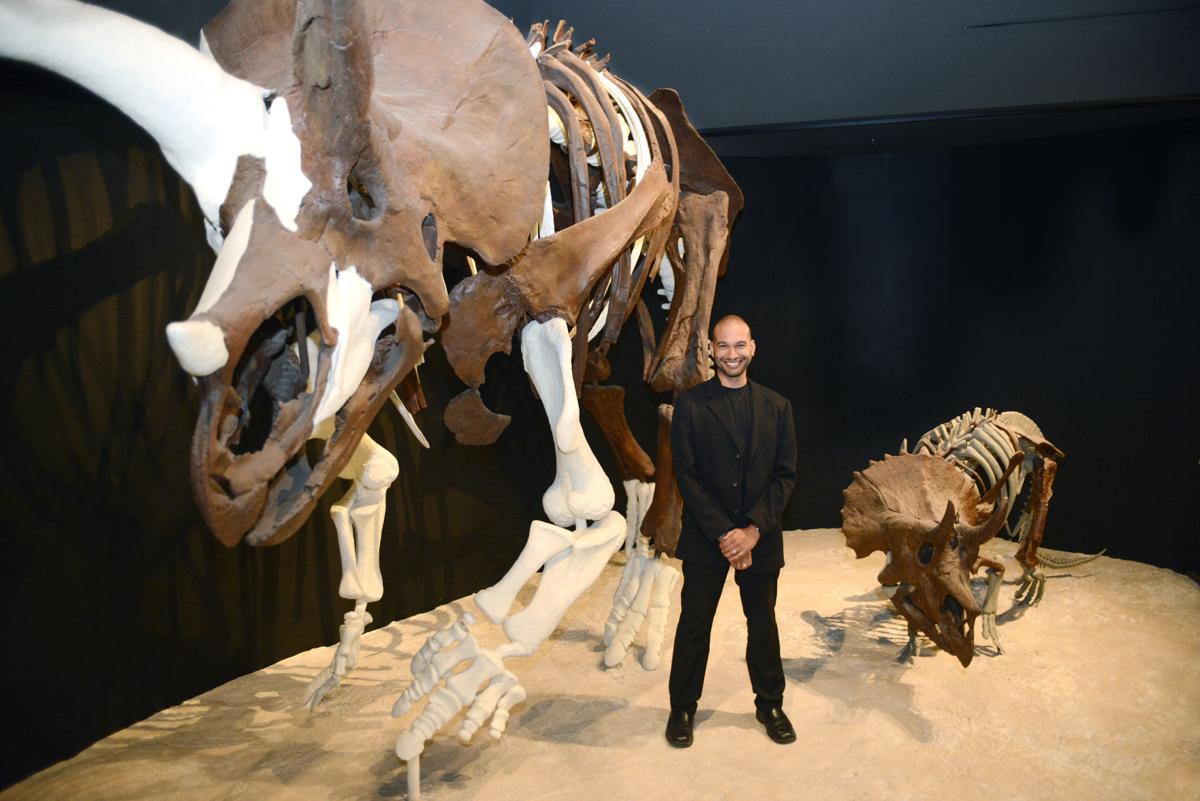 John Scannella, the new John R. Horner Curator of Paleontology, poses in a Triceratops exhibit Friday at the Museum of the Rockies. Scannella studied triceratops while attending graduate school at Montana State University in order to better understand dinosaur evolution. 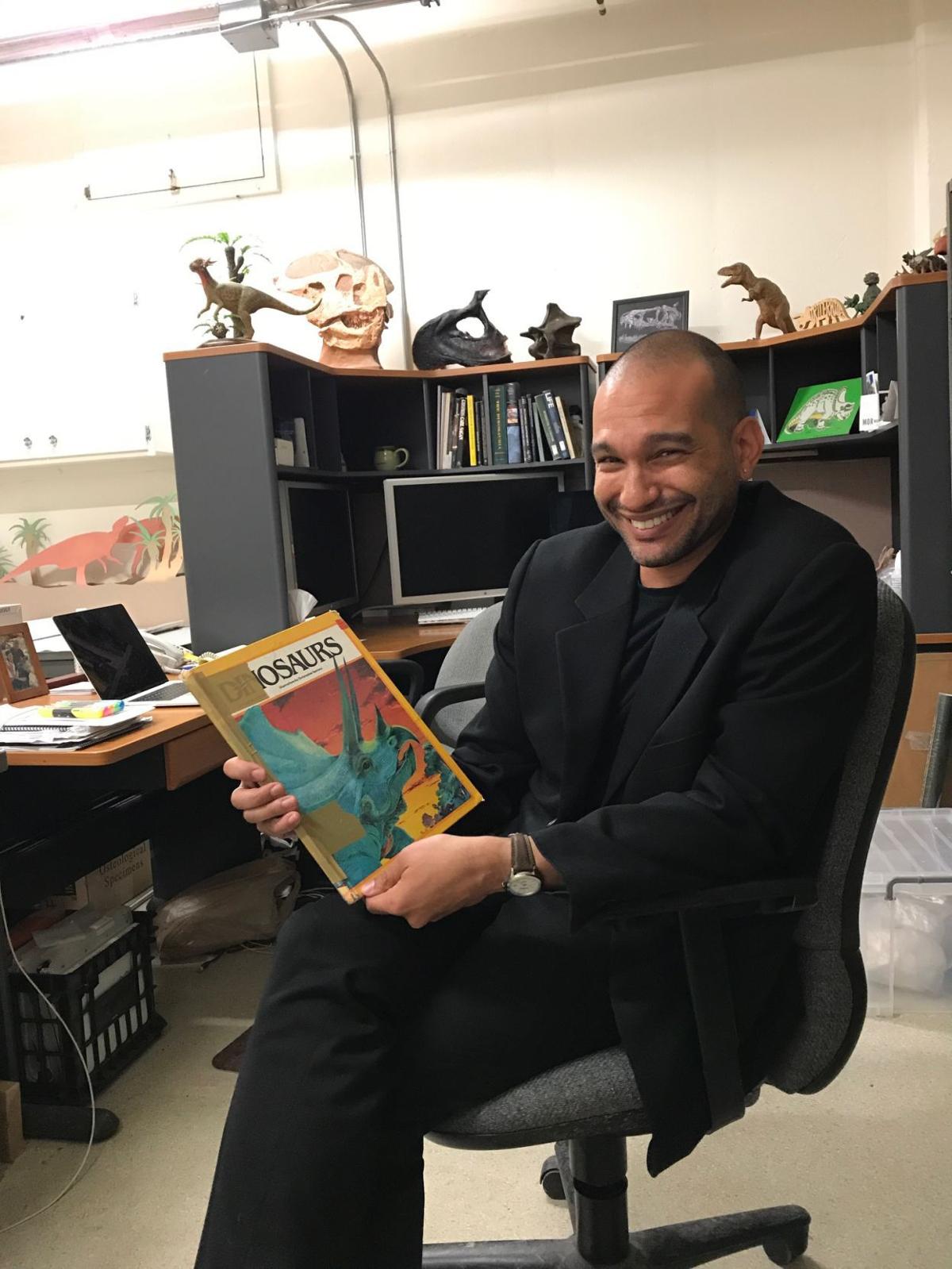 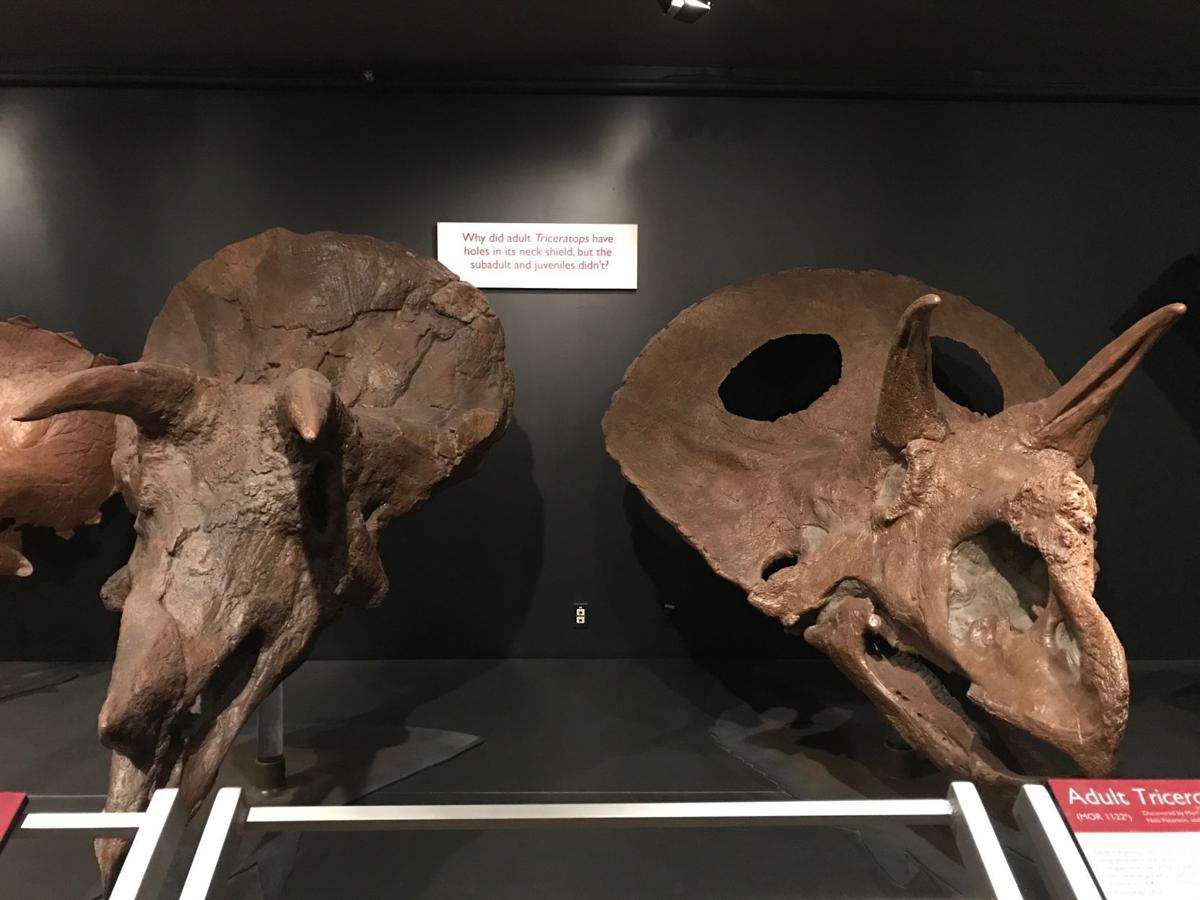 John Scannella was a little boy growing up in Queens, New York, when he first fell in love with dinosaurs.

At age 3 Scannella discovered library books on dinosaurs. By 5 he was busy drawing dinosaurs. On a family trip to the American Museum of Natural History in New York City, his mom recalls that he ran up and tried to hug the dinosaurs.

He watched TV documentaries about paleontologist Jack Horner digging up dinosaurs in the badlands of Montana. By age 8 or 9, he was reading Horner’s books and wishing that someday he might get to visit the Museum of the Rockies.

Today at age 38, Scannella has been chosen to succeed Horner and it’s clearly his dream job. In June he was named the Museum of the Rockies’ first John R. Horner curator of paleontology.

“This is everything I ever dreamed it would be,” Scannella said Friday, sitting in Horner’s old office in the museum basement, now his office.

“As a kid watching shows on the museum digging things up, I thought that would be cool. But I had no concept of how cool cool could be until I was doing it.”

Shelley McKamey, Museum of the Rockies executive director, said Scannella was chosen from more than two dozen applicants from five countries, and he is doing a wonderful job already.

“John has a passion for paleontology that’s infectious,” McKamey said. “He’s able to communicate with a range of people, from professional research colleagues to little kids, just like Jack was able to do. I think it’s unique for a lot of scientists.”

Scannella has T-rex-sized footprints to fill.

Horner first became famous when he discovered nests full of fossil eggs in Montana and theorized that some dinosaur species cared for their babies. Horner won a MacArthur genius grant, advised director Steven Spielberg on the “Jurassic Park” movies, discovered countless dinosaur fossils, and excavated the specimen that’s now on display as “the nation’s T-rex” at the Smithsonian Institution in Washington, D.C.

Horner’s groundbreaking work, advancing science’s understanding of how dinosaurs lived and evolved, fueled the Museum of the Rockies’ expansion and put it on the map. Horner retired last year at 69 and immediately went to work teaching at a California college and searching for dinosaurs for a new museum at the University of Washington in Seattle.

As one of Horner’s former graduate students, Scannella shares the same passions for paleontology, digging for fossils under the relentless sun in the Montana badlands and seeking scientific truth.

Despite those similarities, it would be easy to tell the two men apart. Horner favored the scruffy, Montana-blue jeans, wild, long-haired professor-adventurer look.

Scannella is the urban man in black. On Friday he wore a black sports jacket, black collarless shirt, black slacks, black shoes, close-dropped hair, a diamond stud in one ear and a wide grin.

His office is full of serious-looking dinosaur models and books, as well as a few toys, including a small plastic T-rex that Horner left behind, which appears to dance.

Scannella pulled from a shelf one of his favorite children’s picture books, “Dinosaurs,” that he has had since around age 3. His dad, a construction worker, had to duct-tape the binding to keep it from falling apart. On the cover is a colorful painting of a Triceratops.

That’s where it all started for him, back in Queens, New York, with a children’s book and Triceratops.

Scannella had studied geology at Rutgers University in New Jersey, taken some classes in paleontology, and volunteered at the American Museum of Natural History. He applied to graduate school at Montana State University, home of the Museum of the Rockies, but he wasn’t accepted.

Then he spotted a notice that Horner was going to speak at a museum in Trenton, New Jersey. He decided to make the 40-mile drive, a big deal because he didn’t drive much.

“Back then it was like driving to the moon,” he said.

After Horner’s talk about cool research on dinosaurs, people lined up to meet the famous paleontologist. A friend urged Scannella to say something to Horner, or he’d regret it the rest of his life.

“It was really nerve-wracking,” Scannella said. He got Horner’s autograph and blurted out that he’d applied to graduate school to study with Horner, but hadn’t gotten in. What could he do to improve his chances next time?

“He said something like, ‘Just come out of Montana, start taking classes, you’ll be able to interact with the paleontologists,’” Scannella said. “Why didn’t I think of that? I was so excited, I got lost driving home to Piscataway (New Jersey). I got lost in a maze of dinosaurs.”

He moved out to Montana in January 2006 to take classes as an undeclared graduate student. He took classes from Horner and Dave Varricchio, MSU associate professor of paleontology. That summer, Horner invited him to a field trip.

“It was amazing,” Scannella said.

He recalls climbing up a hill in Garfield County, and seeing a little bone. Then he realized he was looking at “a waterfall of bone coming from the hillside.”

“It was Triceratops, of course,” he said. As the finder, he got to name the site, and to capture his sense of excitement, he called it “the Great Googly Moogly.”

Reapplying to be one of Horner’s graduate students, he was accepted that fall.

In 2010, Scannella and Horner published a scientific paper in the Proceedings of the National Academy of Sciences.

The result of two or three years’ research for Scannella’s Ph.D., the paper theorized that the large horned dinosaur known as Torosaurus — known for the large holes in its bony frill — was actually the most mature version of the horned Triceratops, and not a separate species.

A series of Triceratops skulls on display at the Museum of the Rockies shows their theory — that as Triceratops grew up, their frills got larger and thinner, eventually growing into the Torosaurus configuration.

Some of the evidence they relied on came from looking at slices of Triceratops horns under a microscope. Scannella said the more “osteons” you see — places were cells have eaten into the bone and deposited new bone — the more mature the animal.

The Torosaurus theory met with considerable skepticism — “which was great,” Scannella said. Other scientists wrote papers challenging the theory that Torosaurus is the most mature form of Triceratops.

“It was really exciting because it’s live science in action,” Scannella said. That means a hypothesis is proposed, tested by skeptics, and then discarded or refined or supported. “That’s the way science works.”

Scannella was invited to debate the issue in 2013 at the Boston Museum of Science with paleontologist Andrew Farke, presenting their evidence before high school students. Discussions like that, he said, make for better science.

“It’s not about trying to be right, but finding what’s true,” Scannella said. “If we found the hypothesis was falsified, that would be great. What would falsify it? If we could find a baby Torosaurus. Whenever I go out in the field, I’m always looking for a baby Torosaurus.”

So far, no one has found one, he said, but the theory is probably still up for grabs.

Triceratops are perfect for studying what he’s interested in — the evolution of dinosaurs — because so many fossils have been found. The museum has more than 100 specimens. Scannella joked that he calls Triceratops “the fruit flies” of paleontology.

Early on he had read one theory that perhaps Torosaurus was the male and Triceratops the female of the species. But if that were the case, the fossils would be found in equal abundance, which isn’t the case. So that idea’s wrong, he said, which is “kind of cool.”

In 2007, he first met his future wife, Kari, a geologist,  on a Triceratops dig.

They were married in 2012 — in the museum’s Hall for Horns and Teeth, surrounded by his family, T-rex fossils and, of course, Triceratops.

Scannella already has a full plate.

This week he’s flying to Japan with McKamey and, along with Pat Leiggi, director of paleontology and exhibits, will open an exhibit in Mifune Dinosaur Museum, sister museum to the Museum of the Rockies.

They’ve been working for a year on the new exhibit, “Dinosaur Dynasties,” which highlights the dinosaurs of Montana.

In August, Scannella plans to return to eastern Montana’s Makoshika State Park, to complete the excavation of a Triceratops.

“One of the most exciting things about paleontology is when you go out in the field, you can turn a corner and find the most complete T-rex,” he said. “You don’t know if you don’t go out and look.”

One drawback in collecting dinosaurs is that they’re big.

The Museum of the Rockies had pretty much run out of storage space, until it built a $4 million addition, the Curatorial Center for the Humanities.

It will hold all the cultural collections — everything related to humans, including art, archeology, photography, history and Native Americans, McKamey said.

That should triple the space available for paleontology, Scannella said.

Horner and the rest of the museum staff have created a great foundation, Scannella said. Now he hopes to continue to explore and to build on that foundation.

“It’s an awesome team of people to be part of,” he said.

He has come a long ways from Queens and his childhood dreams of Montana.

This article was changed July 10 to correct the spelling of John Scannella's wife, Kari, and correct two editing errors.

As census results near, Bozeman preparing for increased regional planning